Hidden along the coast of Noosa National Park you will find natural rock pools, where you can peacefully swim in the sea without being swept out by ocean waves.

This post is a complete guide to the fairy pools of Noosa Heads, covering everything you need to know from how to find Noosa’s fairy pools, what to bring with you, the best time to visit and much more.

If you’re planning a trip to discover the fairy pools of Noosa National Park, this is the guide for you. 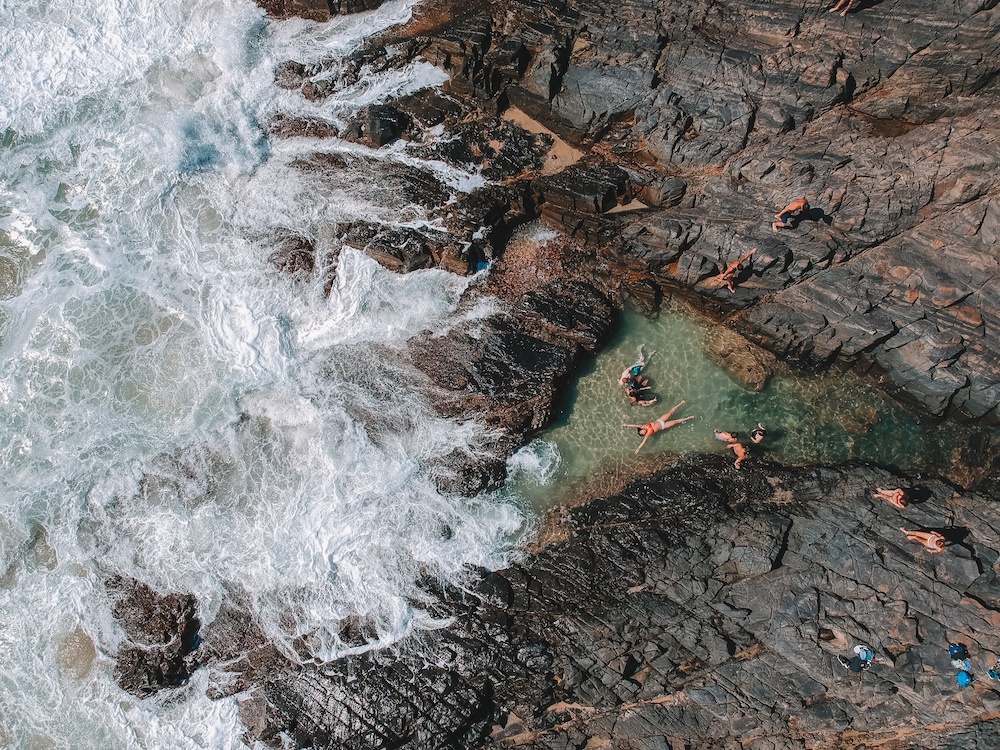 Drone shot of the fairy pools of Noosa Heads, Australia

What are the fairy pools of Noosa?

A fairy pool is a natural tidal rock pool, with a cute and fancy name. The coast of Noosa National Park is characterised by a rocky shoreline.

Over millions of years part of these basalt rocks have been eroded by the sea and wind to form big pool-shaped cavities. Ocean waves regularly wash into the rock pools, creating a natural seawater pool in which you can swim.

They’re a pretty popular spot in Noosa Heads since it means you can swim in the ocean without being swept away by the waves, and let’s not forget that they’re also really pretty.

In my opinion, the fairy pools of Noosa are amongst the best spots to visit along Australia’s East Coast.

| READ MORE: 15 ADVENTURES YOU HAVE TO ADD TO YOUR AUSTRALIA BUCKET LIST | 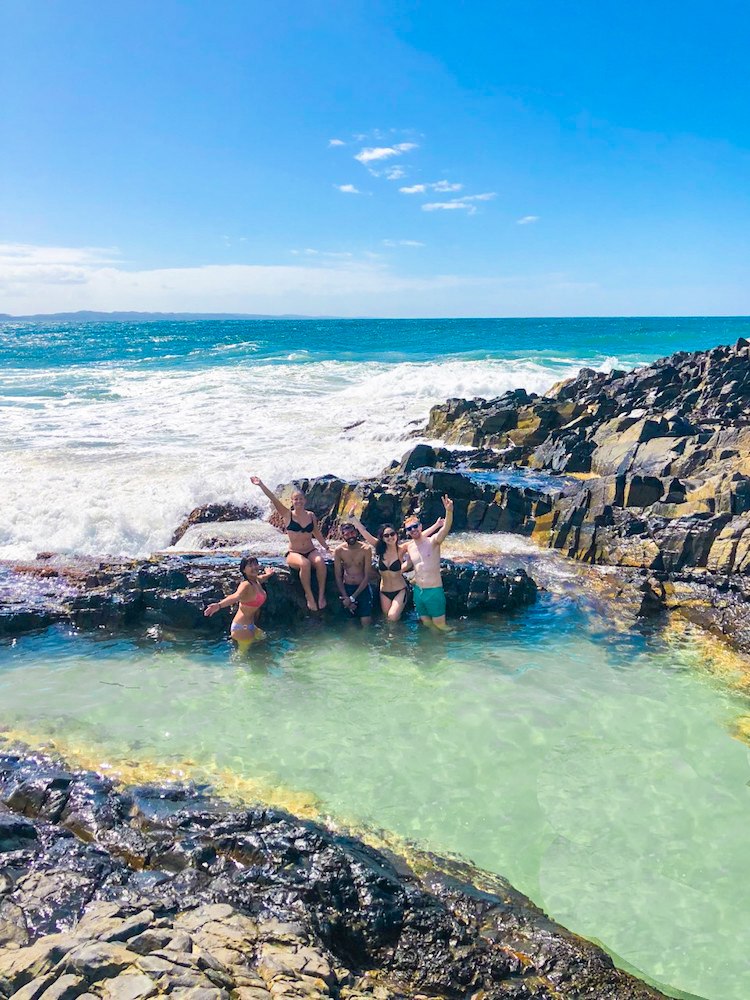 Swimming around the fairy pools of Noosa National Park, Australia

How to find Noosa’s fairy pools

So how do you actually find these magical fairy pools? They are located along the coast of Noosa National Park, a 45-minute walk from the Main Beach of Noosa Heads.

Here is a map of the walking route and step-by-step guide on how to find Noosa’s fairy pools. 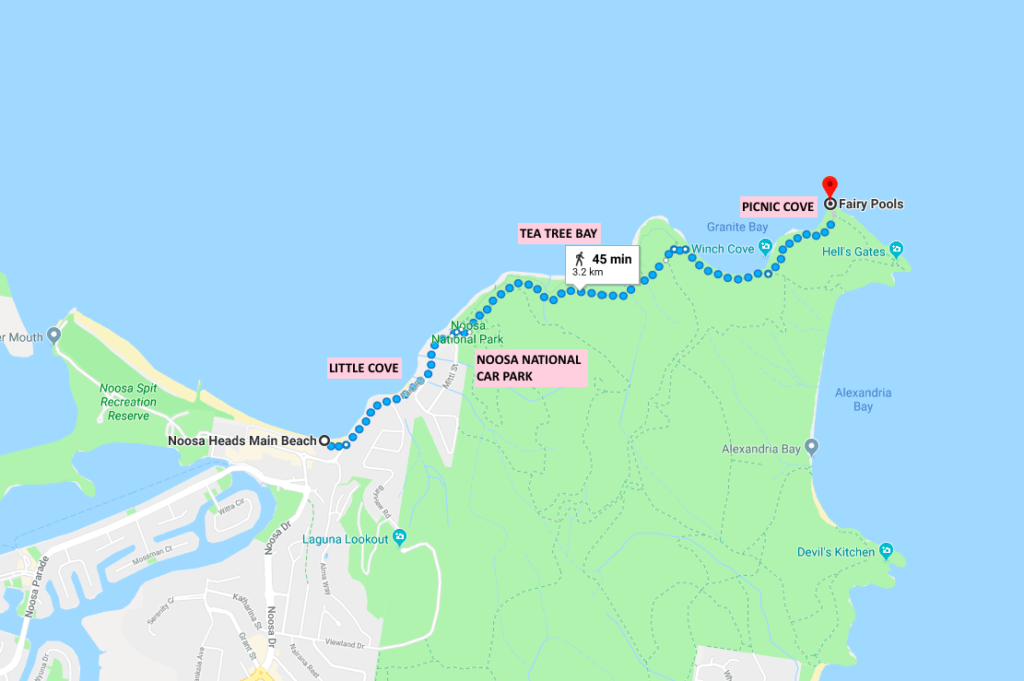 Step 1: Find the start of the Coastal Track from the Main Beach

From the Main Beach of Noosa Heads go to the right until you reach the end of the beach and the start of the road. Here you will see a wooden boardwalk that marks the start of the Coastal Track.

Make sure to stick to the boardwalk on the right.

Rather counter intuitively for a coastal track there is another trail on the left that stays closer to the sea, but this one ends at a beach, and you would have to backtrack to get on the Coastal Track. 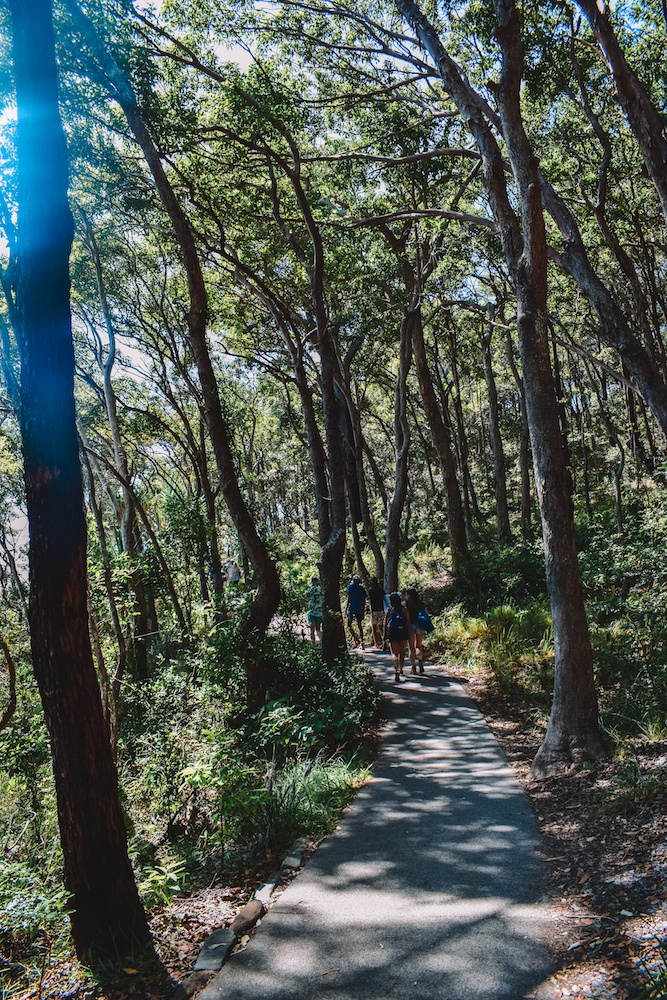 The start of the Coastal Walk in Noosa National Park, Australia

Walk along the boardwalk while always keeping the sea on your left. You will walk past a beach called Little Cove, where you will see people surfing and chilling on the beach.

After about 15 minutes walk you will reach the Noosa National Park car park.

If you’re coming from outside Noosa and you’re driving there you can park directly here and skip the Main Beach (but I recommend popping into town after your trip to the fairy pools, Noosa Heads is a really lovely town)! 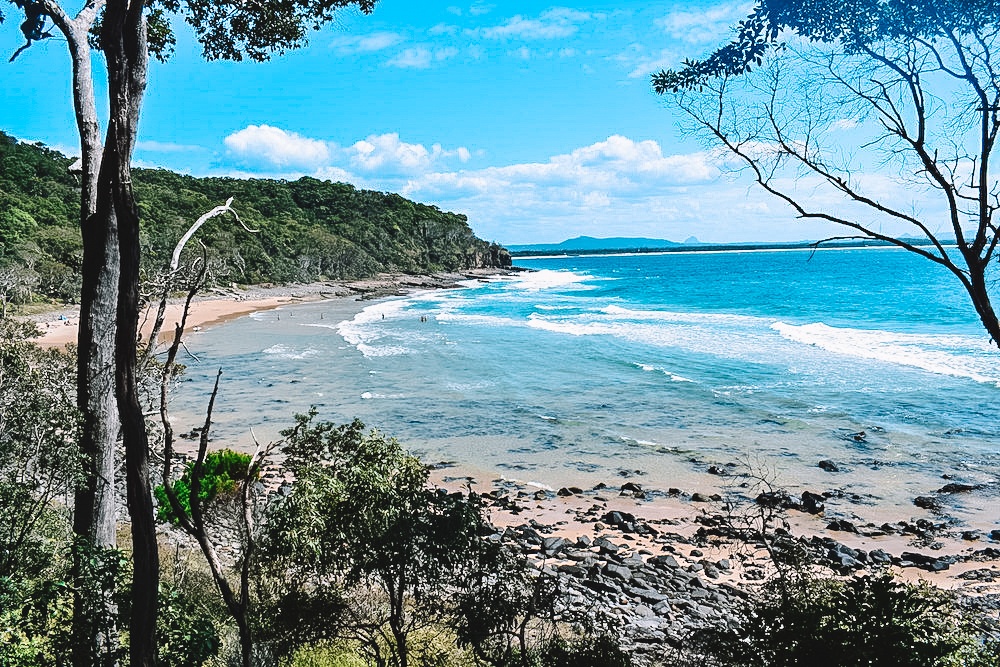 Tea Tree Bay, on the Coastal Walk from Noosa Heads to the fairy pools

The wooden boardwalk ends at Noosa National car park and the track becomes a big more wild. It’s mostly made of rocks, dirt and sand but generally speaking it’s always quite well paved and easy to walk on.

After Granite Bay you will find a smaller bay called Picnic Cove, here you will find a park bench where the track turns right around a large bend. This is where you leave the Coastal Track. 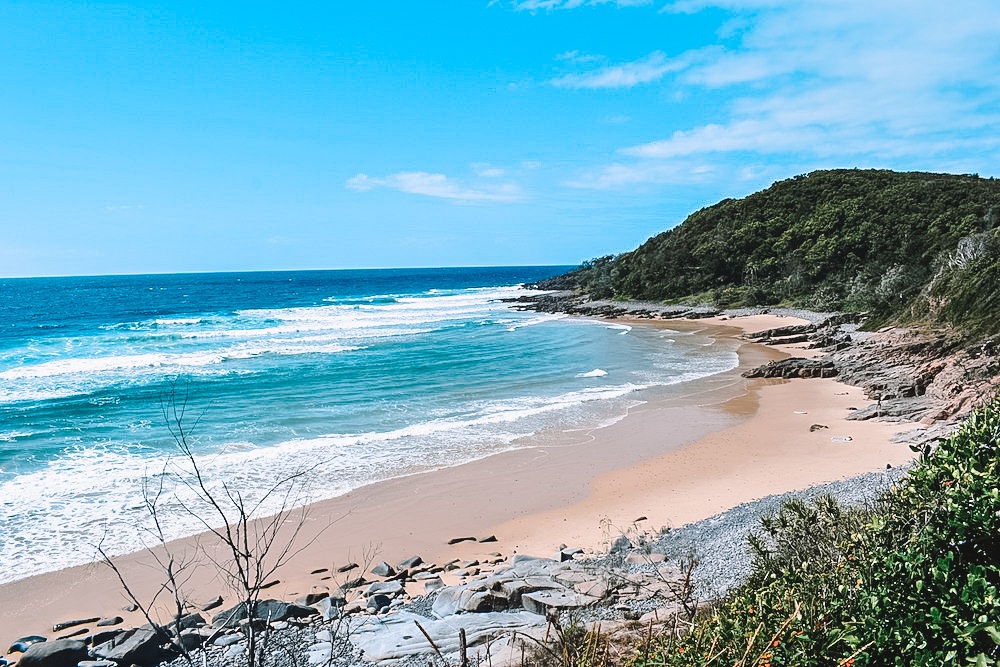 Granite Bay, on the Coastal Walk from Noosa Heads to the fairy pools

Step 4: Climb down the rocks to fairy pools

This final part is off the beaten track so you will have to climb and look around a bit to find the pools.

We found them quite easily as there were people coming an going, however if you’re the first one there in the morning, generally speaking head towards the left and the sea and you’ll find them.

There are two rock pools, one lower closer to the sea that requires more climbing and one higher up. 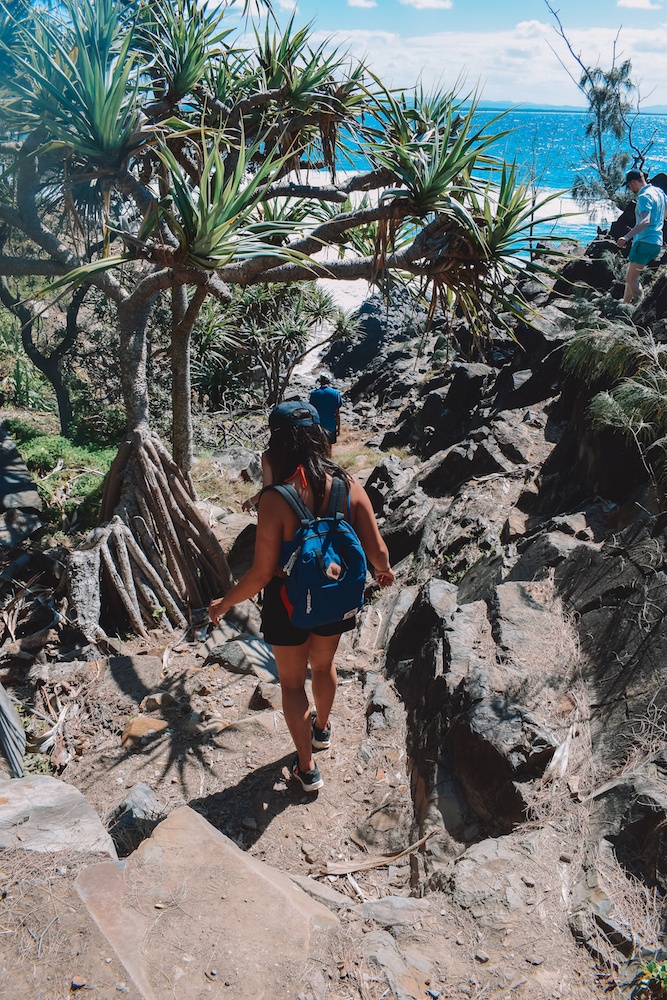 Searching for the fairy pools in Noosa National Park, Australia 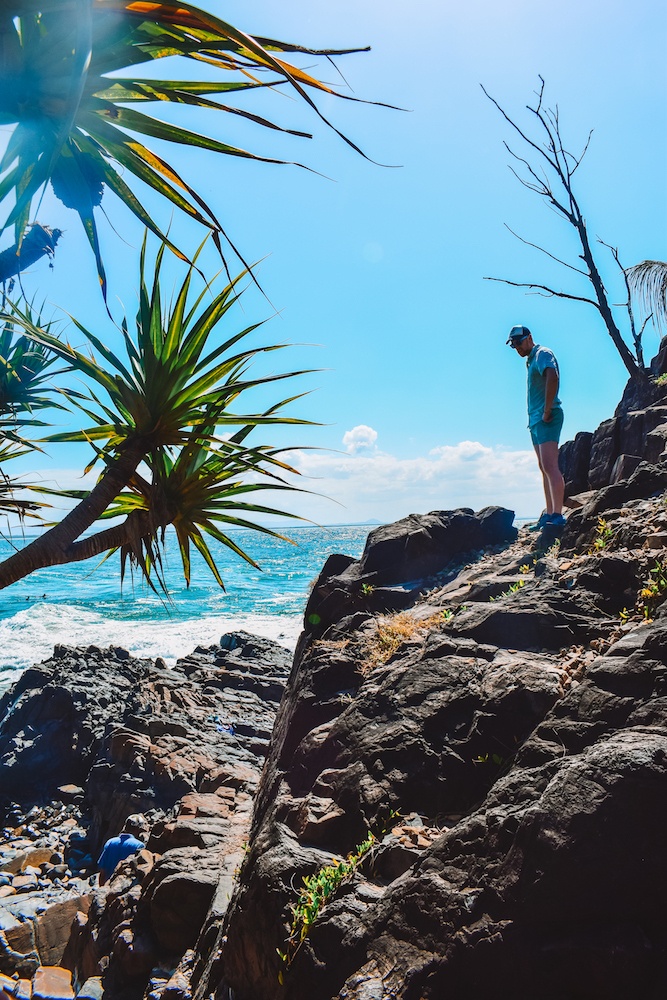 Get there early in the morning or during a weekday

The fairy pools of Noosa Heads are becoming an increasingly popular stop for backpackers who are on an Australian road trip, and considering there are only two rock pools, they can get pretty crowded.

We were there during the day on a Friday during the Easter holidays and it wasn’t too bad, there were other people there but it wasn’t annoying.

If you want to make sure you’re alone there you will have to visit early in the morning or on a weekday. 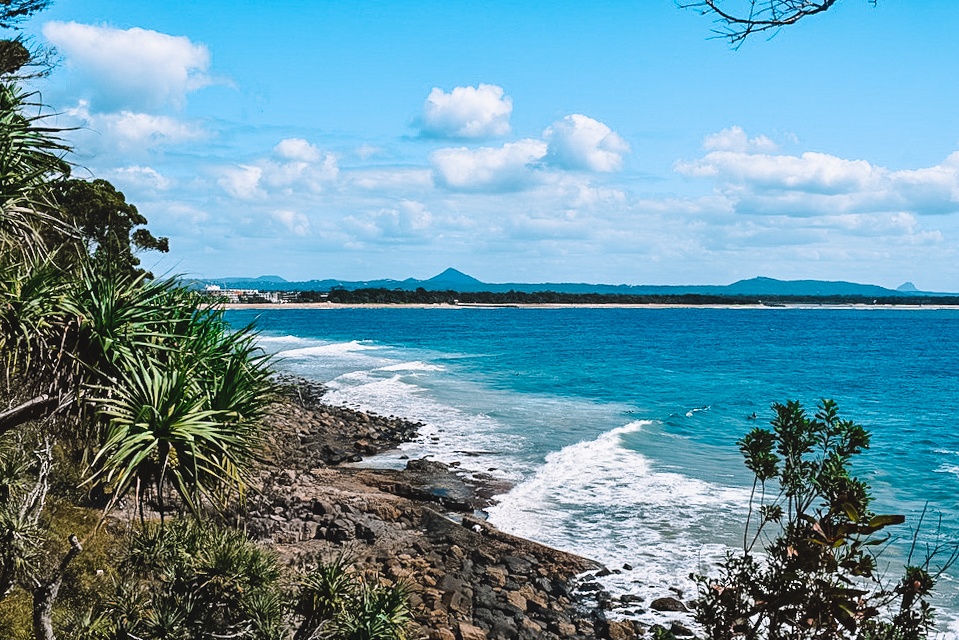 Epic views over the sea from the Coastal Walk in Noosa National Park, Australia

Plan it according to the tides

Admittedly this isn’t something we had planned for, but if you want to make sure you have a perfect visit at the fairy pools, you should check what the tide is going to be like.

In the morning at low tide the water in the rock pools will be very still, with minimal influence from external waves coming in.

In the evening at high tide instead there will regularly be waves crashing over the rocks and washing into the pools, creating a current that will move you around in the pools.

Both are fun but in different ways, it’s up to you whether you want to visit a relaxing pool or a more tumultuous natural Jacuzzi.

We were there in the middle of the day when there were some waves crashing into the pools but not excessively. 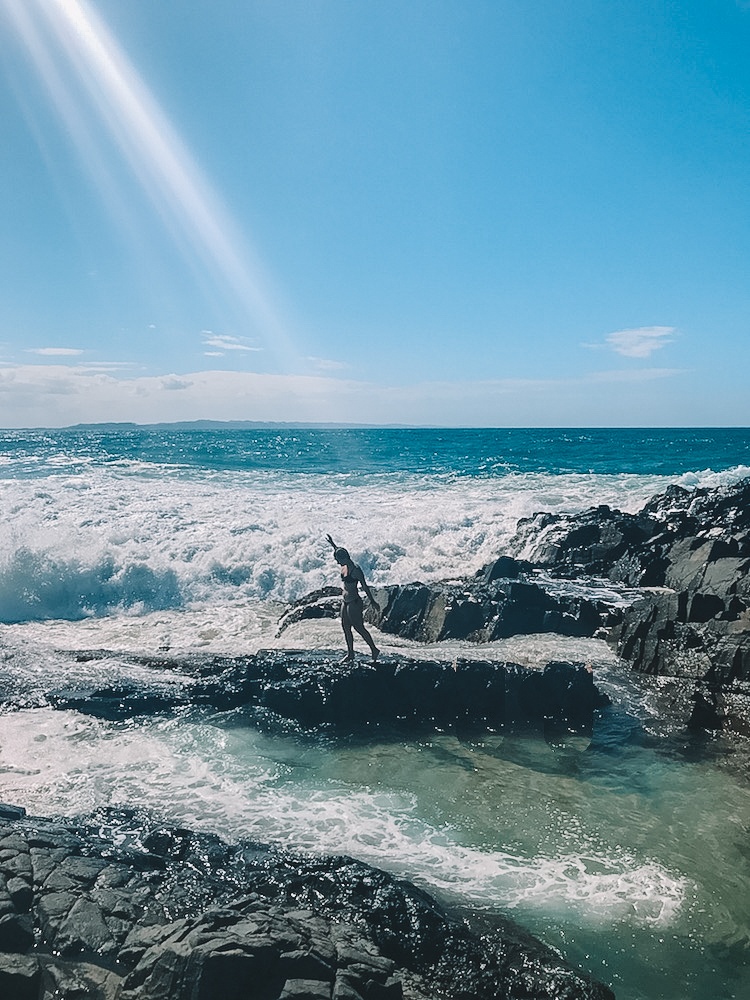 Ocean waves coming into the fairy pools at Noosa Heads

Bring plenty of water and snacks

The fairy pools are a short walk away from Noosa Heads, however there aren’t really any services by the rock pools themselves so make sure to bring anything you might think you’ll need.

The walk from Noosa Heads isn’t particularly challenging but in the Australian heat you might get thirsty and hungry, so bring plenty of water and snacks.

You don’t want to have leave the fairy pools early because you need to go back to buy food and water.

Go to the toilet before setting off from Noosa

As I’ve just said, there are no services by the fairy pools, so make sure to use a toilet in Noosa Heads before starting the coastal walk to the fairy pools. 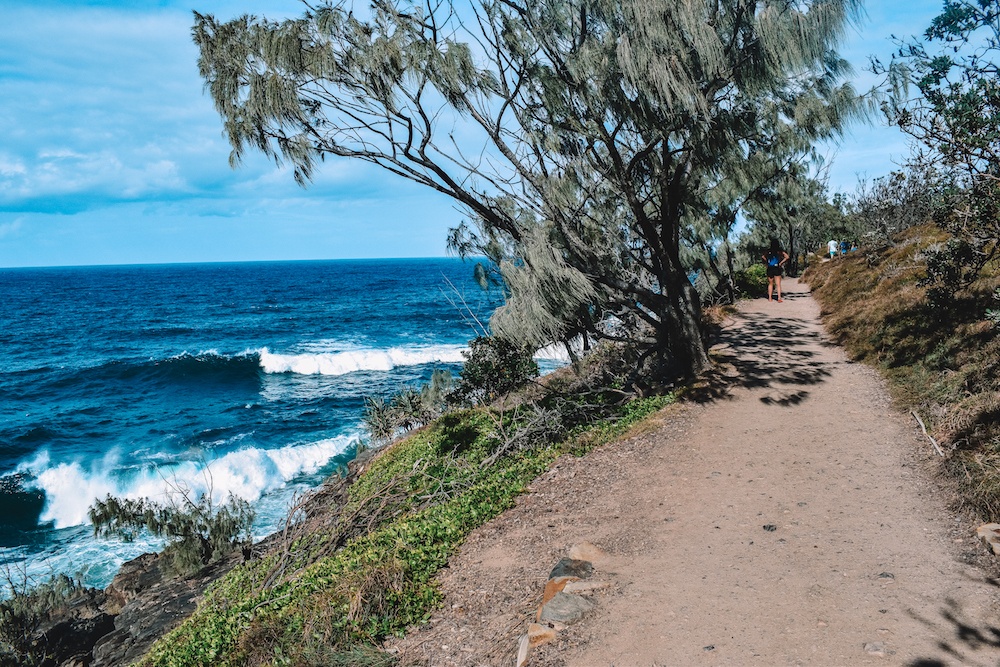 Bring appropriate footwear with you

To comfortably explore the fair pools you’ll need footwear that you can comfortably walk in but also climb over rocks with.

The terrain of the walk is very easy; all throughout, being mostly paved at the start and turning into dirt tracks towards the final sections close to the rock pools and Hell’s Gate, but the ground will still be fairly flat and without major obstructions.

The only part that is somewhat tricky is when you go off the track and have to climb over the rocks to reach the pools.

I was wearing flip flops because I didn’t think it would be bad and I struggled a bit, and I ended up having to take off my flip flops and walk on the rocks barefoot which isn’t great.

On the other hand one of my friends was wearing Timberland boots because she thought it was going to be a proper hike and she had hot feet all day. So don’t be like us, be more sensible and pick more appropriate footwear.

Australian sun can be very damaging to your skin so if you’re planning on being at the fairy pools all day, exposed to the sun without shade, make sure to pack high factor SPF with you.

Somewhere along the Coastal Walk in Noosa National Park, Australia

So you’ve just spent the day at the fairy pools and you’re wondering whether to drive on to another town or if it’s worth spending some time in Noosa Heads.

If you have the possibility, I highly recommend spending some time in Noosa Heads.

I personally loved the chill surfer vibe of the town. There are plenty of shops, bars and restaurants that you can explore, and if you wan to learn to surf, lots of beaches and opportunities to do so.

Noosa Heads is also a popular starting point for tours to Fraser Island, so if you’re planning on heading there next, just schedule some time in Noosa Heads around it.

There is also much more to Noosa National Park than just the fairy pools. If you have longer you can go on beautiful coastal walks around the park and to famous viewpoints like Hell’s Gate. 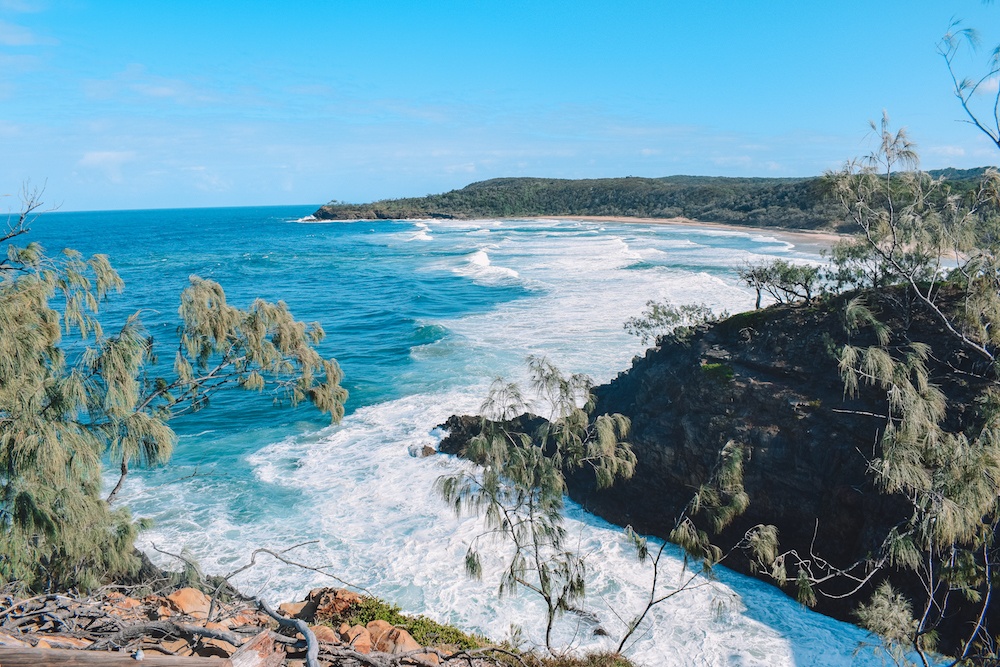 Where to stay to visit the fairy pools of Noosa Heads

If you want to spend a night in Noosa Heads (great choice!) there are plenty of options for accommodation, both close to the Main Beach and slightly further out. Here are some options for every budget.

Budget: Nomads Noosa Backpackers – This is where I stayed and I loved it. The dorms are clean and spacious, and they have lots of communal spaces. It can be a bit of a party hostel so be ready for that!

Click here to book your stay at Nomads Noosa Backpackers!

Mid-range: Little Cove Court – These lovely apartments are the perfect solution for those looking for something a bit nicer than a hostel, without breaking the bank.

Click here to book your stay at Little Cove Court!

Luxury: The Sebel Noosa – If you’re looking to treat yourself, this is a great place to do so! Located right by the Main Beach of Noosa, this hotel has a beautiful pool where you can relax after exploring the fairy pools!

Check out the latest prices and availability at the Sebel Noosa! 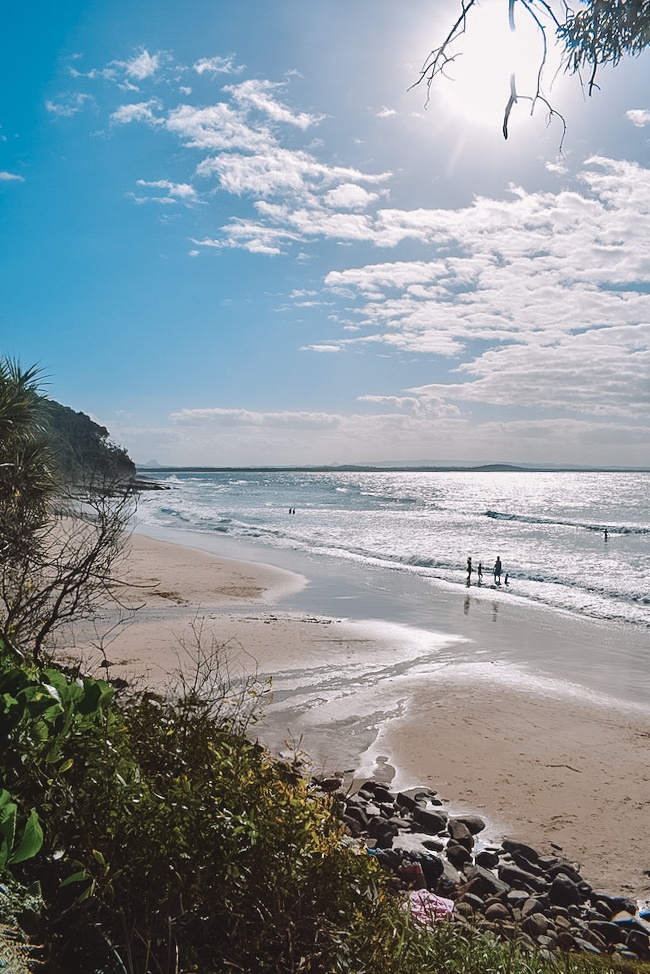 One of the beaches in Noosa National Park, Australia

While they’re becoming an increasingly popular tourist attraction it didn’t feel like they were too busy just yet.

Adventuring along the Coastal Walk of Noosa National Park, climbing over rocks and swimming in the fairy pools made for a perfect day to break up our Brisbane to Cairns road trip.

I highly recommend visiting Noosa Heads and the fairy pools when you’re in Australia.

Looking for more Australia travel tips? Check out my other guides:

Enjoyed reading about the fairy pools of Noosa Heads? Pin it! 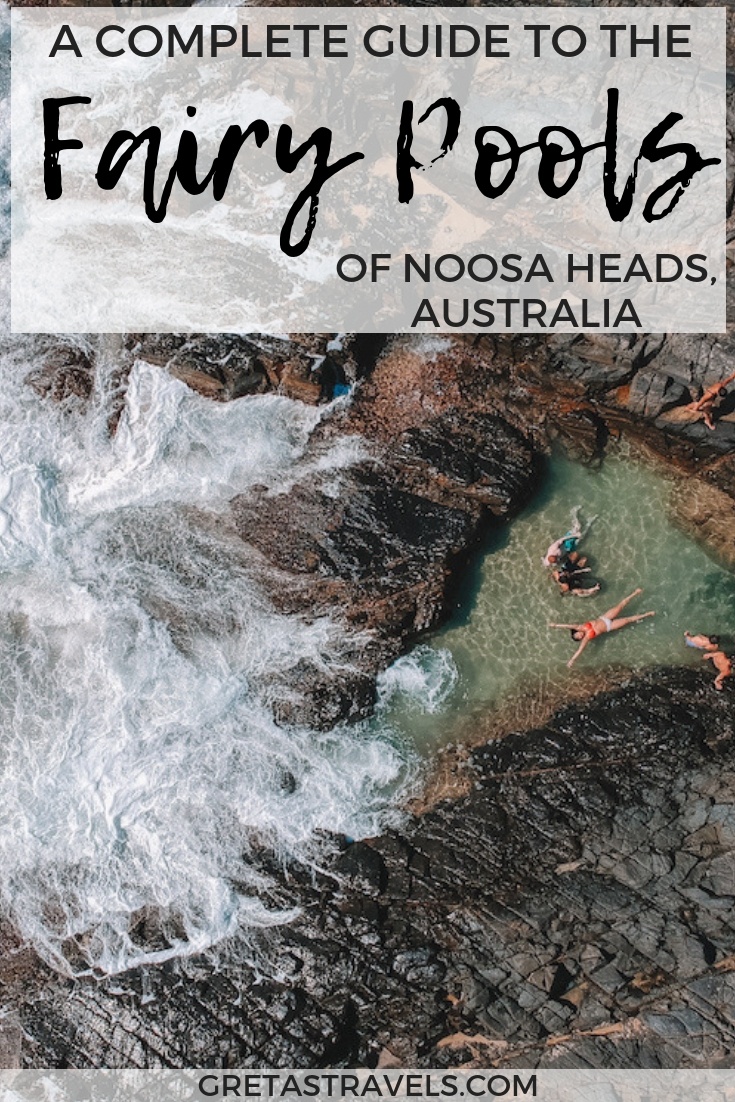 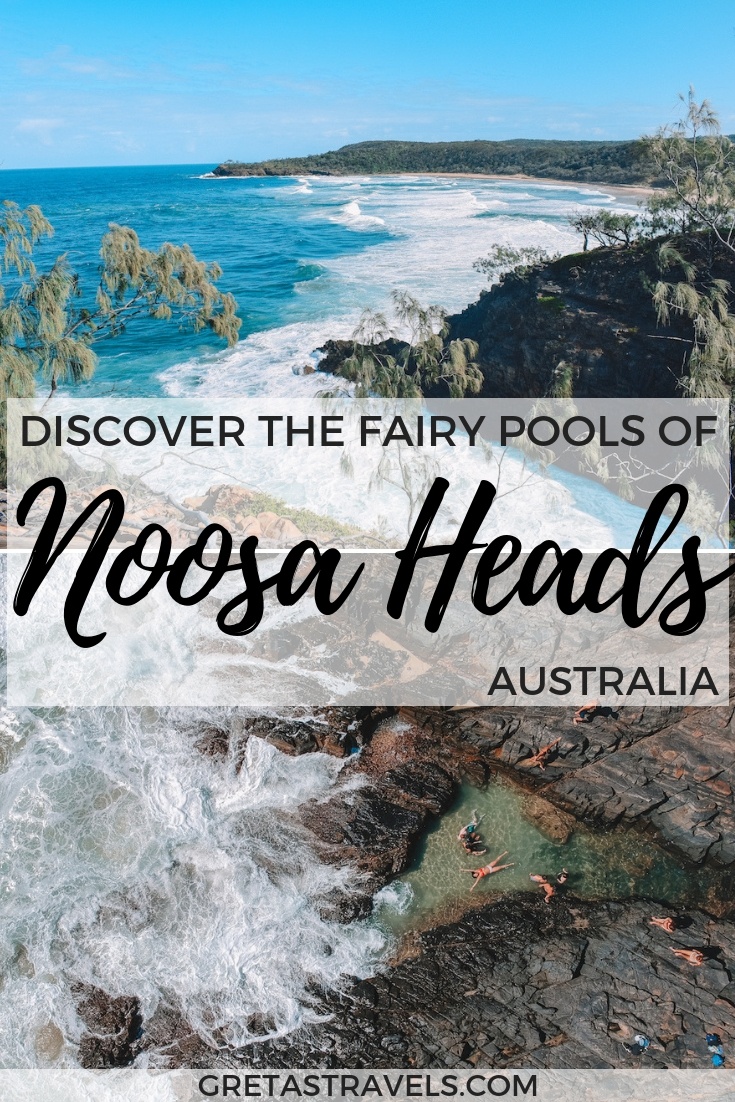 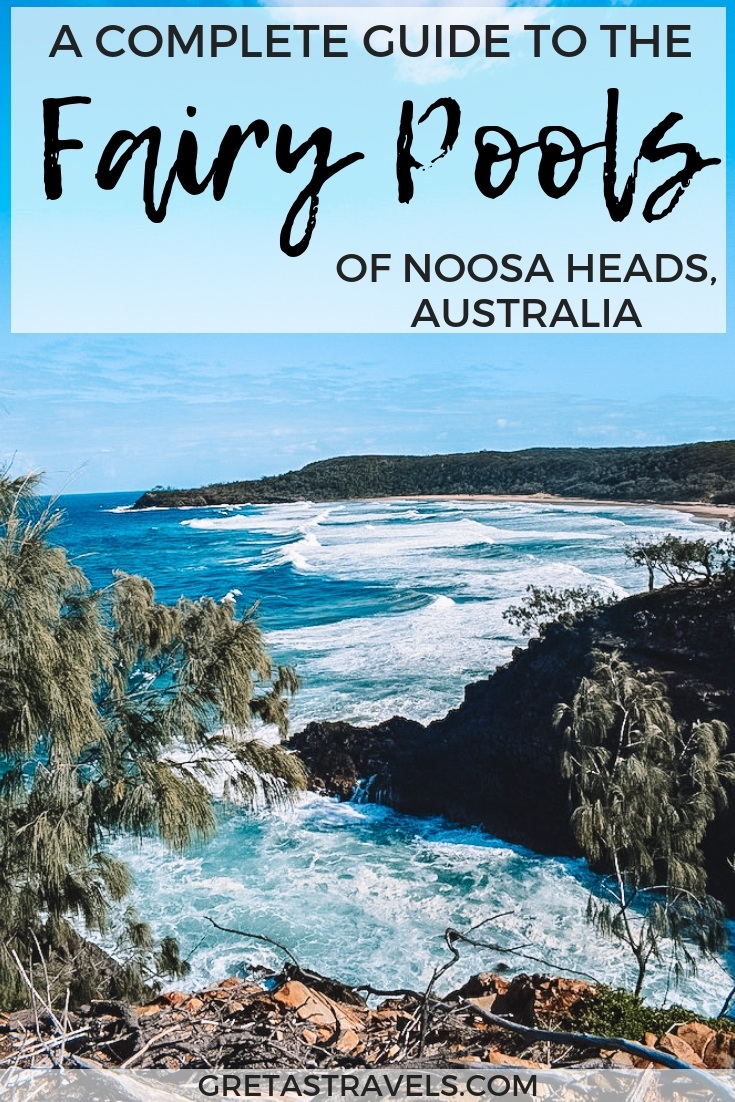 I am so blessed to call this place home now!