Himeji castle is a wonder of medieval architecture. The palace, which is sometimes referred to as the “White Castle of Japan” is meant to resemble the majestic birds taking flight.

It is located in the city of Himeji, Japan. The original fortress was built back in the early 14th century to protect the surrounding lands.

The building has been remodelled many times throughout its rich history. Completely changing in both appearance and height. It has however remained largely the same during the past century. 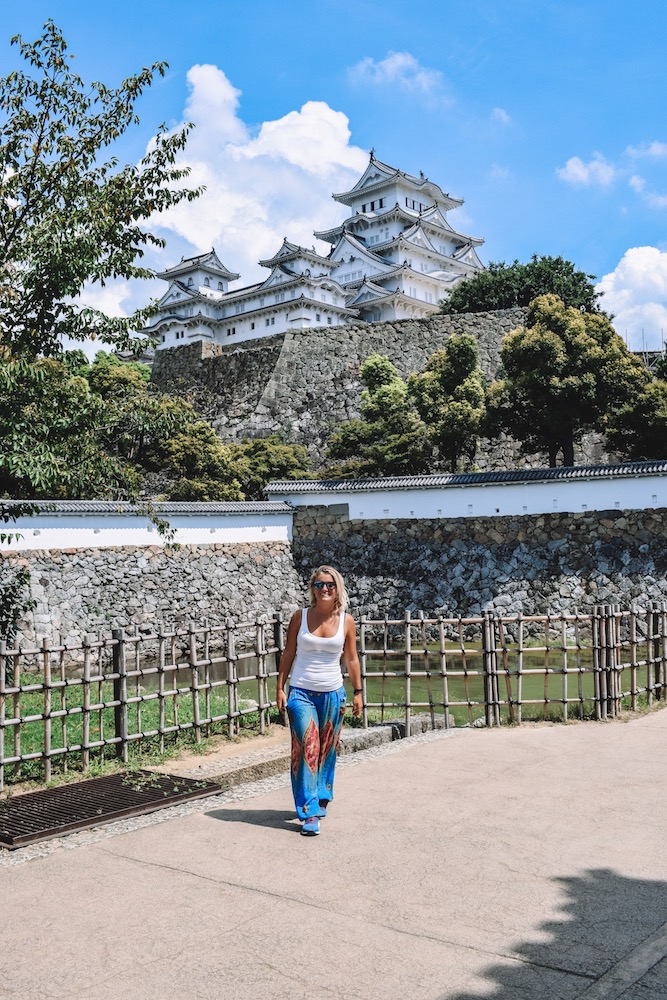 Himeji castle is the largest in all of Japan and amongst the most visited attractions in Japan.

The castle has many beautiful shrines and feudal carvings engraved into its wooden interior as well as peaceful gardens to explore during your trip here.

Himeji castle can easily be visited on a day trip, either from Kyoto or Osaka. If you don’t have time to spend in the city of Himeji, this Himeji Castle day trip guide is just what you need!

Let’s jump in and look at some of the interesting facts about this fortress, its grounds, and how to have an incredible Himeji day trip. 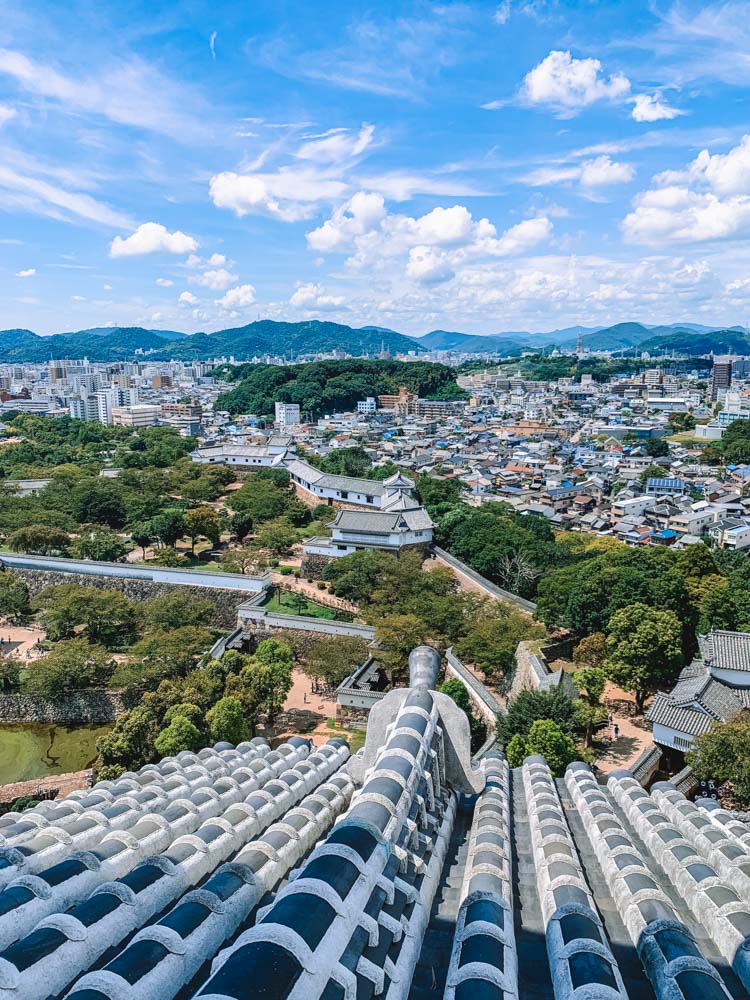 The view from the top of Himeji Castle

The history of Himeji Castle

Himeji Castle has had a fairly interesting history. Over the years, it has been remodelled, demolished and completely renovated multiple times. Back in the 14th century, it looked vastly different from what it does today.

Moats, gardens, shrines and an extra two stories were slowly added to the castle as time and ownership of it passed. Its ownership was mainly passed down through the Kuroda clan that was stationed here during the 14th and 15th centuries. 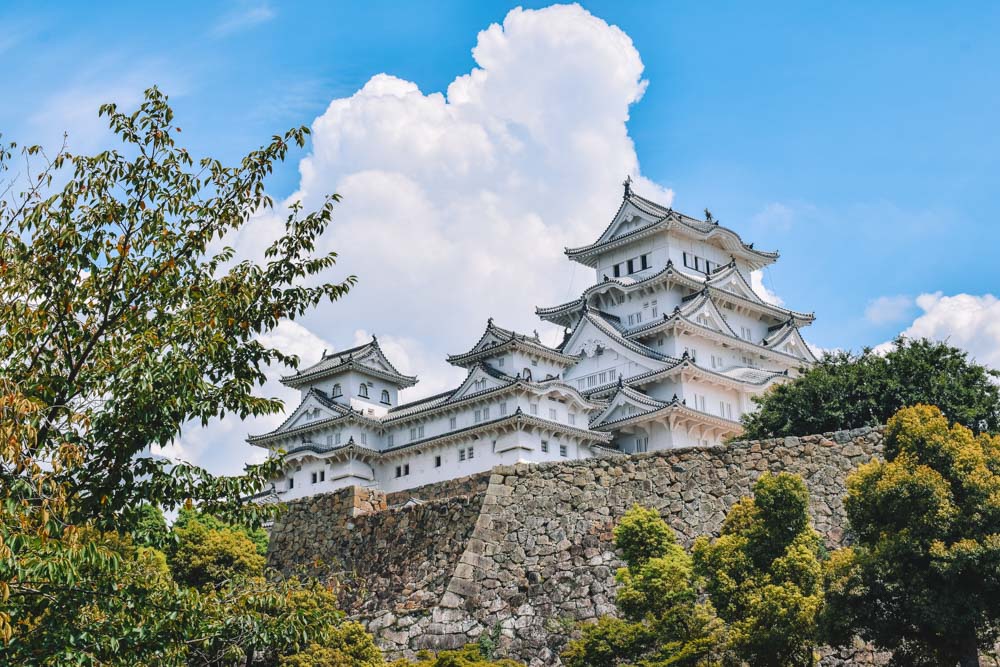 The outside of Himeji Castle

After a few years, the castle was gifted to a man known as Toyotomi Hideyoshi who decided to expand it, adding the three-story keep.

However, after a major war in the early 1600s, the castle was rewarded to Ikeda Terumasa for his help in a battle.

Ikeda completely demolished the original structure of the castle and expanded it – building moats surrounding the complex as well as a new keep. Himeji has stayed the same since then seeing no significant remodelling or change.

It was one of the first registered UNESCO world heritage sites in Japan, originally being named one back in 1993. 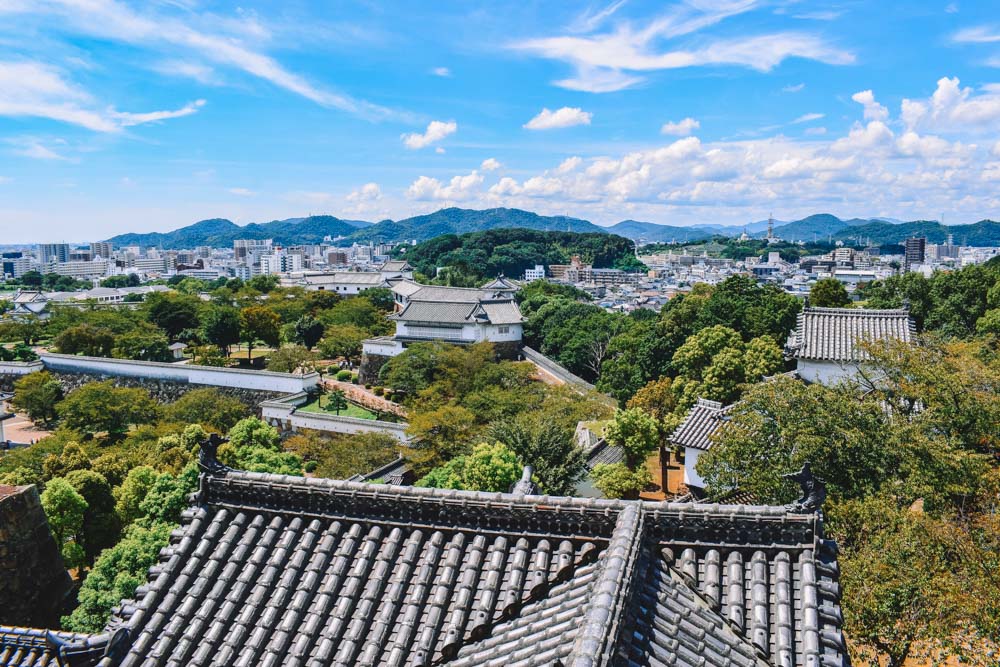 The view from the top of Himeji Castle

The Japanese government goes to great lengths to ensure its feudal era castle remnants, which are spread throughout all of Japan, remain preserved.

Restorations at most of the Japanese castles happen every decade or so to remove any dirt and blemishes on the castles and their exteriors.

The conservation of these buildings helps preserve the culture of a bygone age and keep them pristine for many years to come. 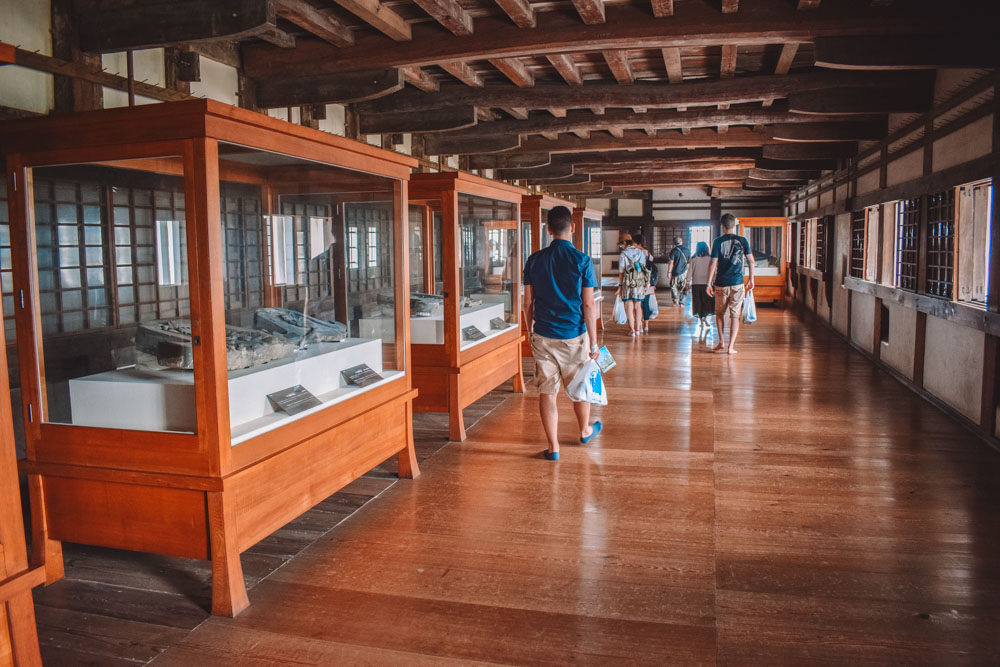 The inside of Himeji Castle in Japan

There is a beautiful garden located outside the main castle complex named the Koko-En Garden. It was originally created to celebrate the 100th anniversary of Himeji city. The total size of the garden is around 3 hectares.

There are nine significantly different sections to the gardens with different plant species and trees. Autumn or spring are the best times to visit the garden when the trees either change to hues of orange and red or bloom with splendour.

Wandering the gardens is one of the best things to do in Himeji Castle. When the flowers are in bloom the area is bathed in a variety of colours and pleasant scents. 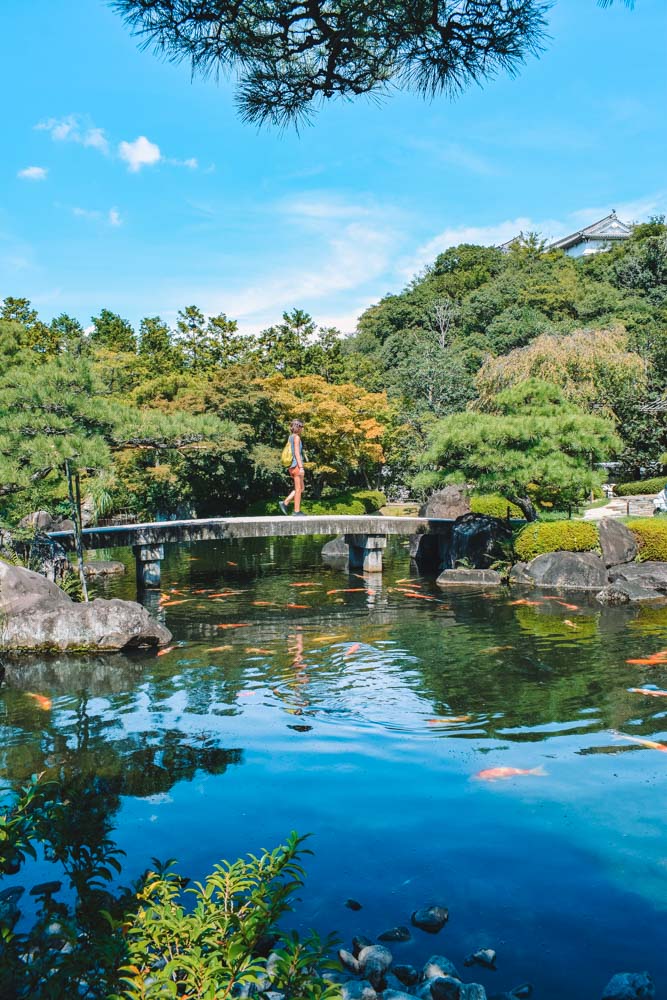 The beautiful gardens of Himeji Castle

Getting to Himeji Castle from the nearby cities

There are many cities spread out around the castle’s location. The best mode of public transport to use in Japan is the railway system. It’s fast, clean and efficient allowing you to get where you need to very quickly and easily.

I highly recommend getting a Japan Rail Pass. The main use for these passes is that they allow a traveller unlimited access to the trains without tickets and can save you lots of money during your trip here!

Let’s look at the options of travelling to Himeji from some of the nearby cities. 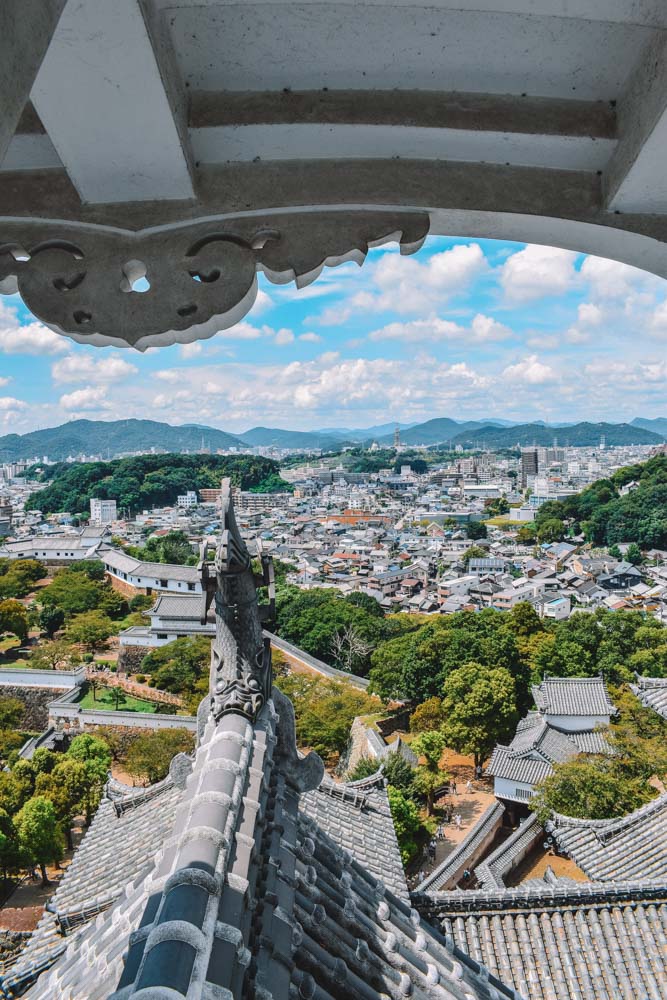 Getting to Himeji Castle from Osaka

Travelling to Himeji Castle from Osaka is a relatively short trip of one hour (94,8km) if you’re planning on driving there. However, taking the train is also a valid option.

The train service in Japan is incredibly well-developed and spans the entire length of the island nation. There are many large train stations in Osaka and two separate lines that will take you to Himeji Castle.

The first is the Shin-Osaka via Shinkansen line and the second is the JR Kobe line. Both of these trains will take you to the castle from Osaka in less than 30 minutes.

If you have a Japan Rail Pass both these journeys are included in the pass. 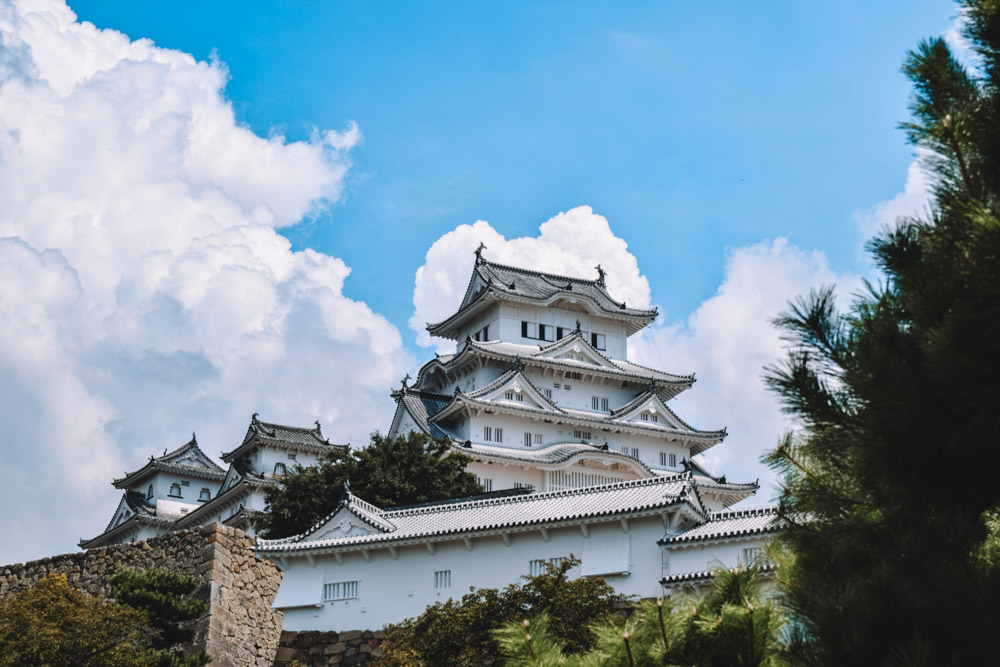 The outside of Himeji Castle

Travelling to Himeji Castle from Kyoto

Travelling to Himeji Castle from Kyoto will take a bit longer. This trip is around two hours if you plan on driving (122,5km).

However by train it’s much quicker, around 45 minutes with either the JR Tokaido and Hikari Shinkansen.

| READ MORE: WHY YOU NEED THE JAPAN RAIL PASS | 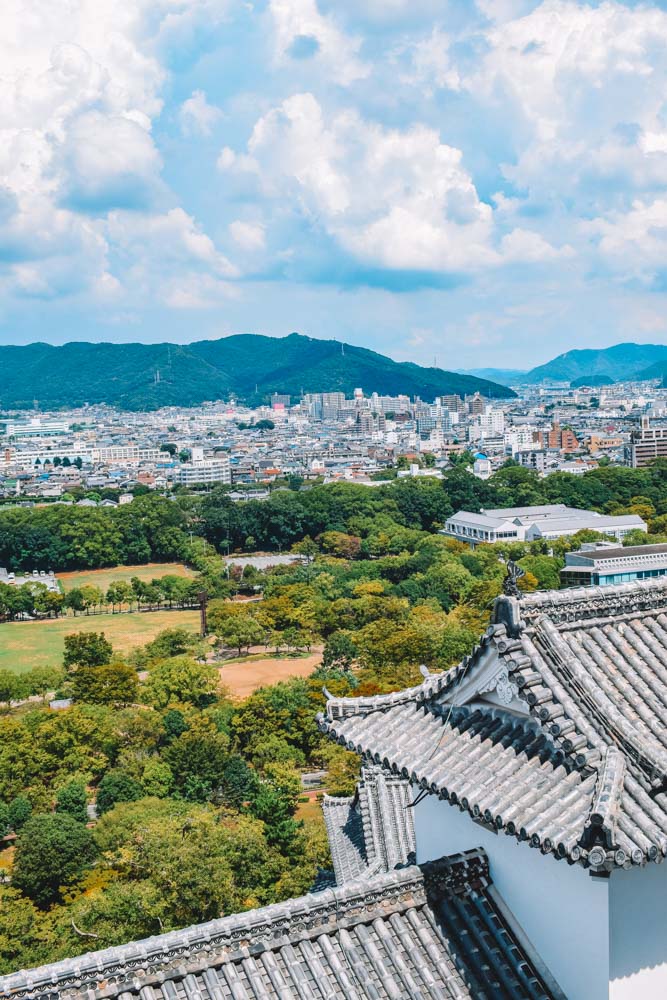 What to know before you visit Himeji Castle

Himeji Castle has many names, the “White Heron Castle” and “White Egret Castle” are the most well-known.

The interior of the castle is quite empty, but there are beautifully carved clan markings inside which tell the story of those who owned the castle.

The roof of the castle is accessible to tourists and there are beautiful views of the surrounding countryside mainly due to Himeji Castle’s location high up on a hillside.

All of the castle walls are a magnificent sight to see from this aerial perspective. 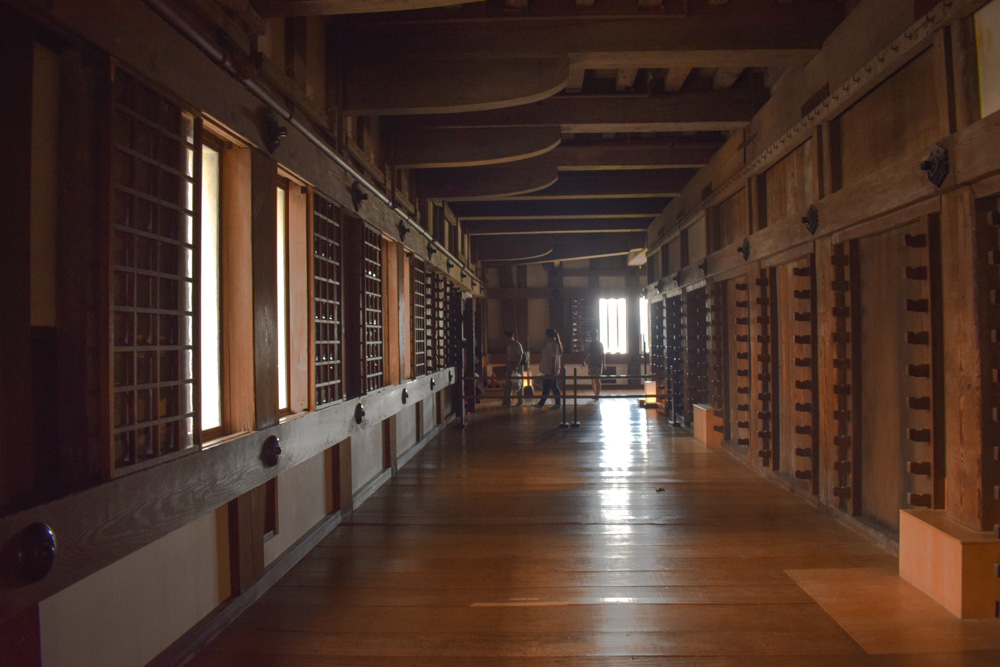 The inside of Himeji Castle in Japan

Entry to Himeji Castle costs 1,000 yen, or 1,050 yen if you want access also to the castle gardens. This will give you entrance to the castle and a brochure, but with the inside of the castle being so bare, it can be a little boring.

If you’re a history fan you should look into doing a Himeji Castle tour. There are many guided tours that take you throughout the entire complex whilst explaining the history and pointing out significant places there.

These tours include access to the entire castle as well as the gardens.

These will be a bit pricier than the entry only ticket, a whole day tour will usually cost about $67 dollars, but you will learn much more than just enjoying the pretty views from the top floors of Himeji Castle.

Open hours are from 9 AM to 4 PM every day of the year except for December the 28th and 29th where it is closed to the general public. 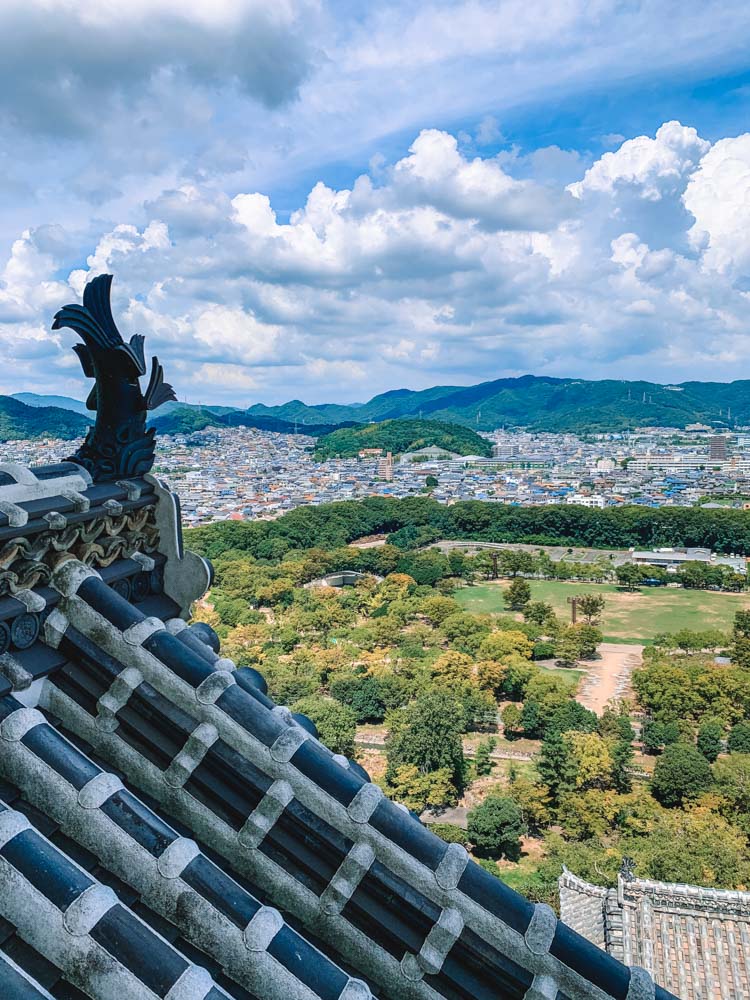 Where to stay to do a Himeji Castle day trip

Whether you’re visiting Himeji Castle on a day trip from Kyoto or Osaka you should aim to stay somewhere close to a train station, so that you can minimise travel within Kyoto and Osaka before even getting onto a train to Himeji.

In Kyoto I was staying at Hotel Elcient Kyoto, which was right across from the main train station in Kyoto.

The staff were always helpful, the rooms clean and fairly spacious, and besides the convenient location next to the train station to visit Himeji, it was conveniently located also to explore Kyoto.

Click here to see the latest prices and availability at Hotel Elcient Kyoto!

If you want to know where to stay Osaka, look no further than Hotel Monterey La Soeur Osaka. I stayed here and loved it, especially for the position, as it was close both to a train station and Osaka castle.

After our day trip exploring Himeji Castle we were close to one of the main attractions in Osaka, as well as being connected to everything else we wanted to see in the city. 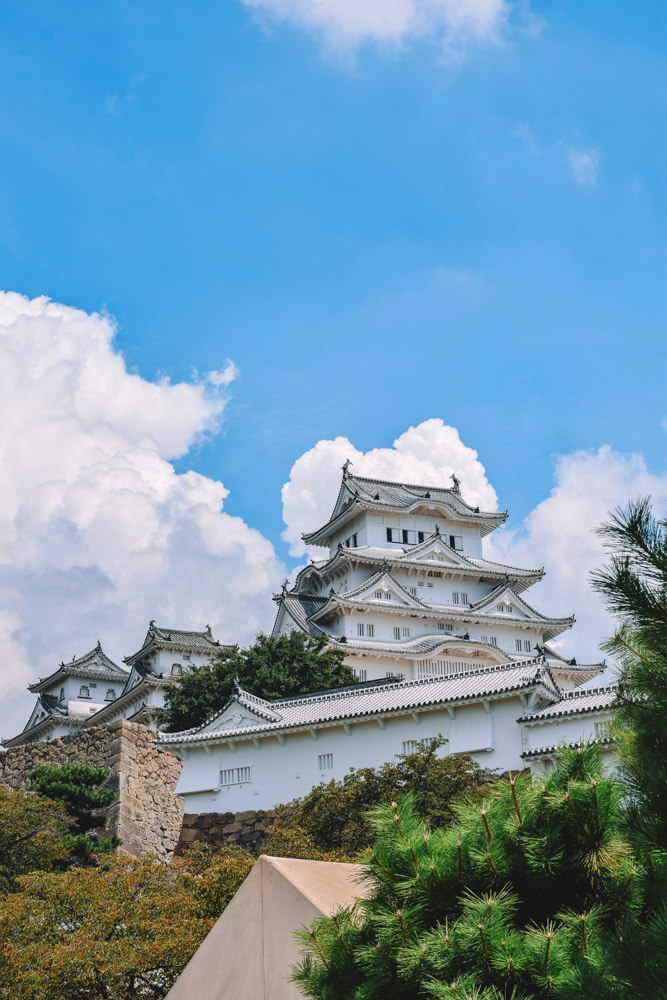 The castle is a beautiful work of architecture that has withstood the test of time for hundreds of years. The scenery around the castle grounds is utterly breathtaking and truly a one of a kind experience.

The gardens close to the castle are the best place to relax and unwind after a day of exploring the castle’s interior and many shrines.

If you’ve been wanting to visit Japan for a while and were unsure of what attractions to look for be sure to place Himeji Castle high on that list! You’re certain to have an amazing time here.

While in Japan we did day trips also to Nara, Miyajima and Kamakura, but the day trip we did to Himeji Castle was probably my favourite.

Enjoyed reading about doing a day trip to Himeji Castle in Japan? Pin it! 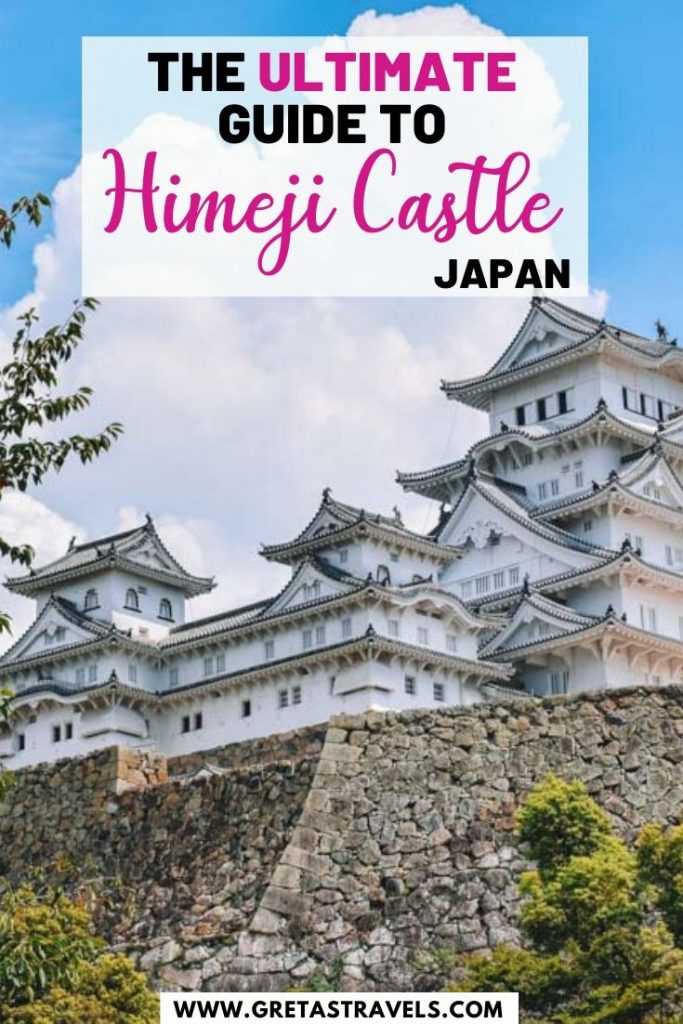 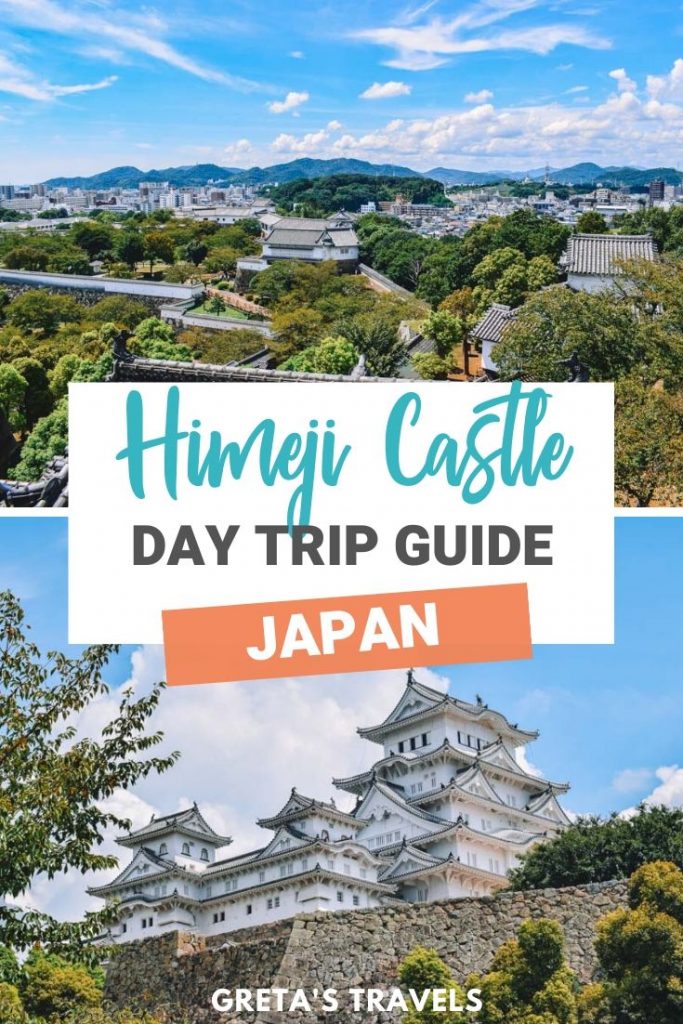 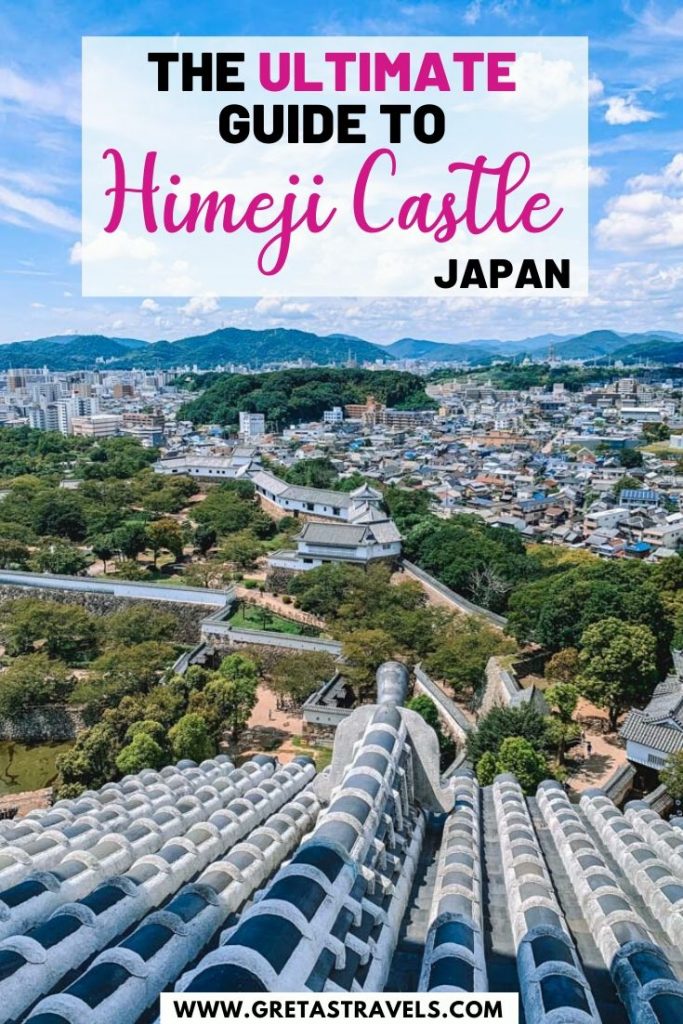