Last updated on Mar 27, 2019 It's pretty likely that this article contains affiliate links. If you click on them I might receive a small commission, at no extra cost to you.

Like every twenty-something I grew up watching a bit too much Lion King, which made a safari a long standing item on my bucket list. I finally fulfilled this African dream when I went to Kenya and did a safari in the Tsavo East National Park, one of the most amazing experiences of my life. Read on to find out everything you need to know about doing a safari in Kenya, specifically in the Tsavo East National Park.

About the Tsavo East National Park

With its 13,000+ kilometres squared the Tsavo East National Park is one of the largest and oldest parks in Kenya. Access to the park costs 65 USD for adults and 30 USD for children. There are three entry gates to the park and once inside you can only drive on the set paths, bush driving isn’t allowed so as to not disturb the wildlife. In the Tsavo you can see a wide variety of wildlife, from the “Big Five” to smaller mammals and birds. Its rich biodiversity are what make it such a popular destination for safaris. 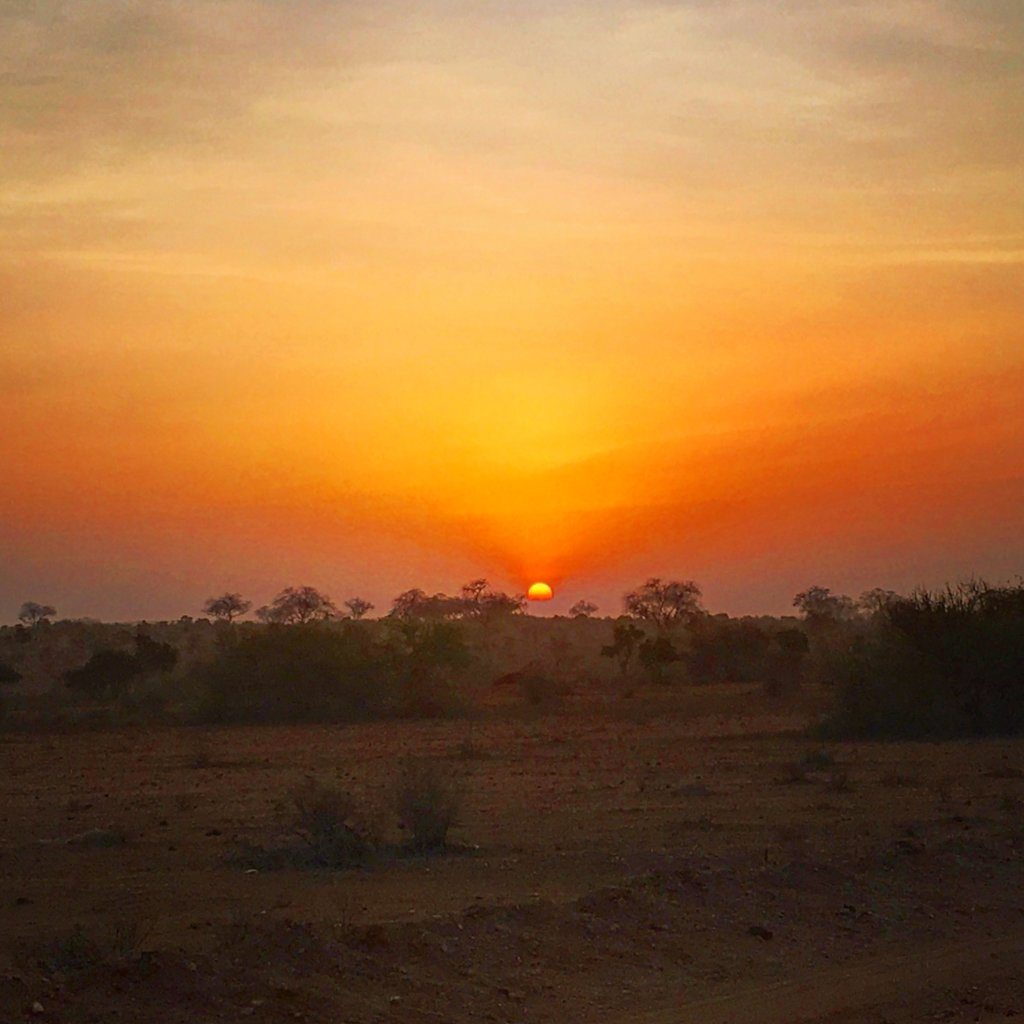 Sunrise over the savannah in the Tsavo East National Park

How to get to the Tsavo East National Park

We were staying in Malindi before heading to the Tsavo East National Park. From Malindi it is approximately a 4-hour car drive depending on the road conditions. The road is only up to a certain point outside Malindi, with the rest of it being a dirt road which takes considerably longer. If you are travelling to the Tsavo from further away eg. Nairobi you can probably get a plane to the small airstrips that are close to the park. As I was driving I can’t really comment on how expensive or not they will be, but I imagine your camp or lodge you are staying at will organize this for you. 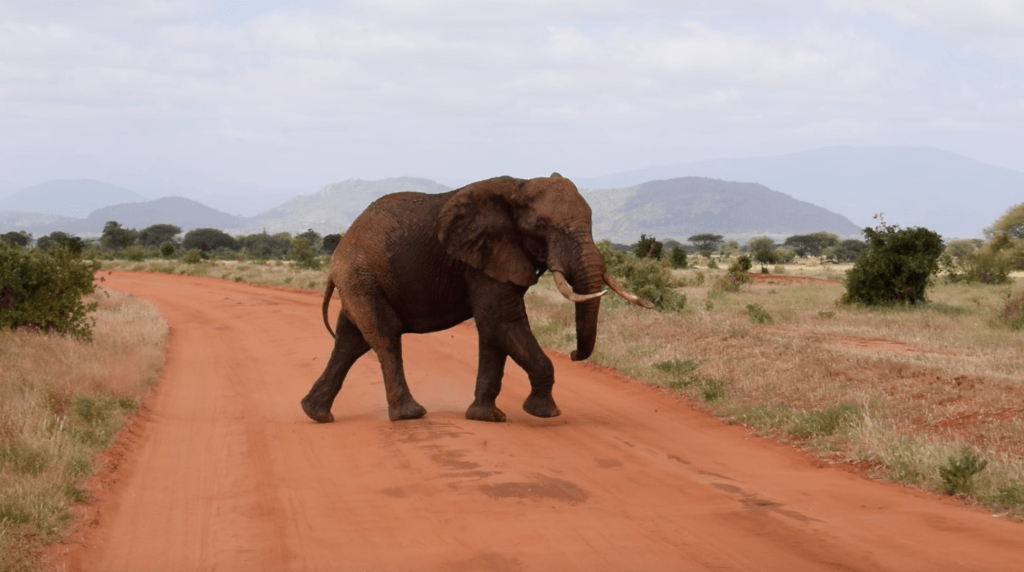 Elephant crossing the road during our safari in the Tsavo East National Park.

Where to stay during your safari

The convenience of doing a safari in the Tsavo compared to say the Masaai Mara is that if you wanted to it could be done as a day trip from Malindi. This however would be pretty intense and a very long day, so I recommend staying a night in a lodge or camp closer to the park, even if just for the experience. We stayed at a camp just outside the park called Swara Osteria Camp and it was an incredible experience. 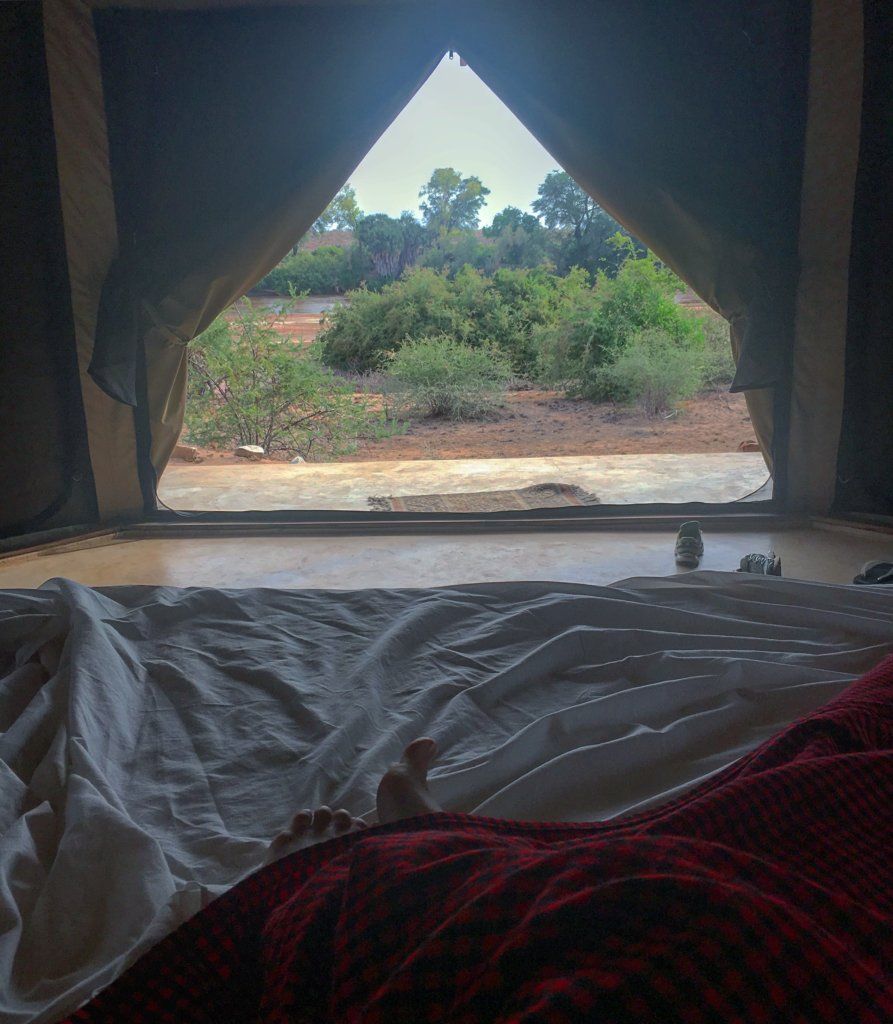 Our safari in the Tsavo East National Park

After a long afternoon of driving we arrived at the Swara Osteria Camp in the evening, where we were greeted by Maasai with refreshing drinks and towels. We were also greeted by the most amazing starry sky, since the power generators don’t kick in till later at night, we got to sit around the pool and the fire and enjoy the star and candle lit atmosphere. Before having dinner we decided to head out for a night safari, which was incredible. Driving around the savannah under the stars, surrounded by all the sounds of animals getting ready for the night was magical. We didn’t see big cats, which we were hoping to see as they usually come out to hunt at night, however we did see a group of elephants with their babies. We also saw a rabbit, who ran away as soon as we approached, can’t lie when I say it was pretty unexpected. 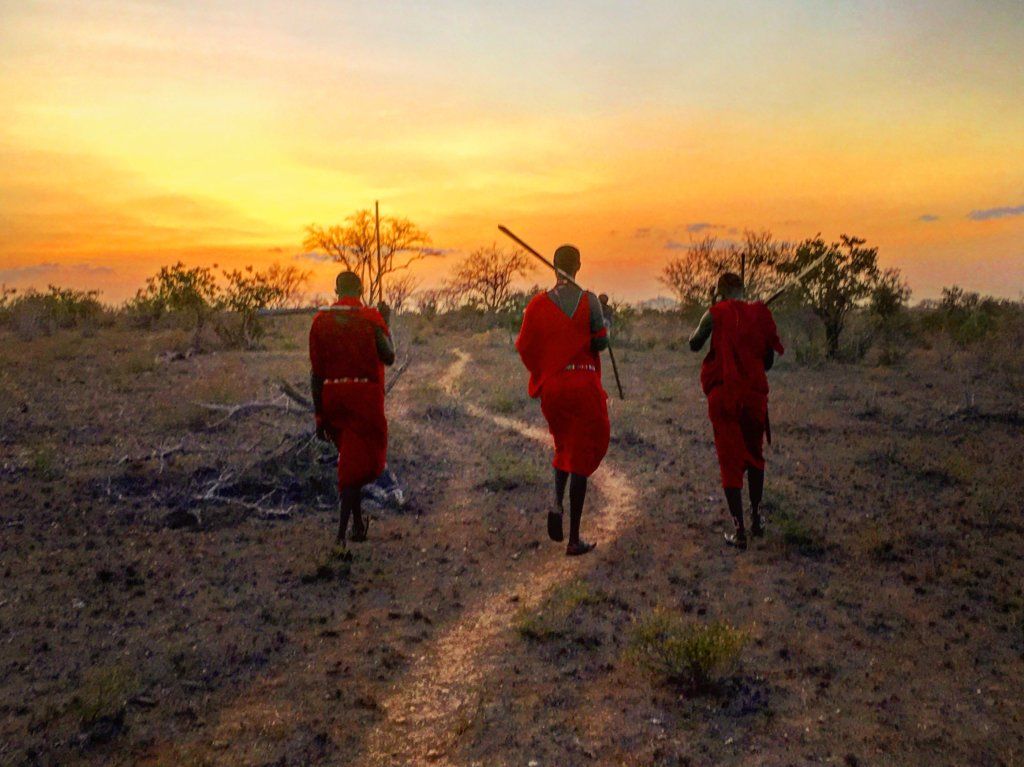 Sunset walk in the savannah with the Maasai

The morning after we woke up at 5am, and had the best breakfast while watching the sun rise over the river in front of our camp. We set off nice and early, so that we could have a full day searching for animals, and watch the sun rise over the savannah. I had a very Lion King moment when the big red sun rose in all it’s beauty. My safari companions didn’t appreciate my singing moment as much. 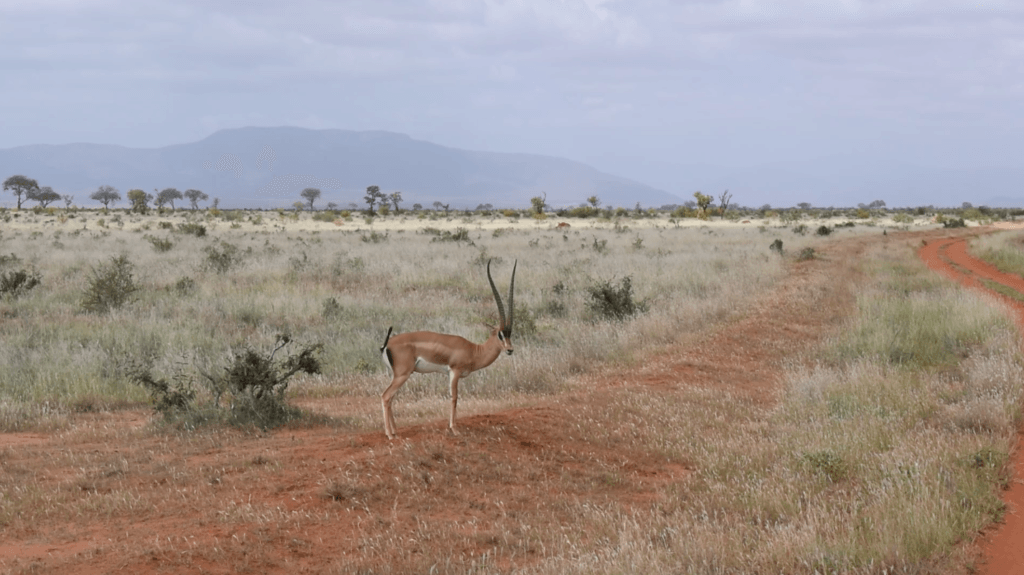 Antelope chilling on the side of the road

We had an adventure packed day, featuring mostly a lot of driving, interrupted very often by a yell of “I see something!” or “Look there ahead!”, which was usually an animal, but sometimes just turned out to be a funny shaped rock. Seeing our first elephant in daylight was quite the encounter, the power and size of a mother elephant with her cub have a way of making us feel small. After that we saw lots of elephants, playing in muddy rivers or simply walking around. One even almost charged at our land rover! 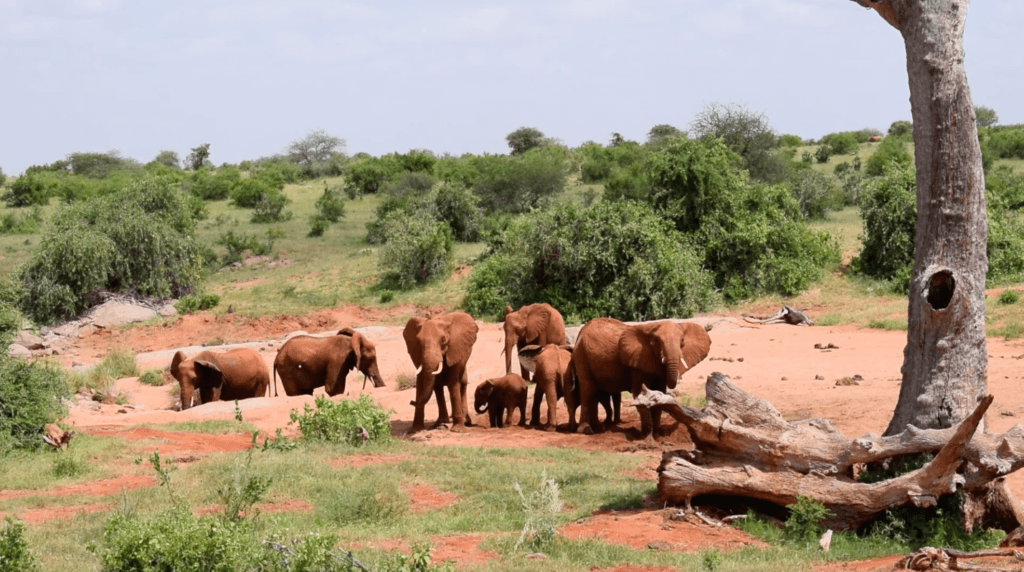 A group of elephants look for water

At one point we got to a block up in the road, with three or four cars parked on the side of the road, we were wondering what they were doing when our guide explained they had spotted lions. I got super excited about this. The lions were resting in the shade under some bushes, but we saw them move around and walk from one to the other. I can happily say I saw Simba. Although I still need to find Pride Rock. 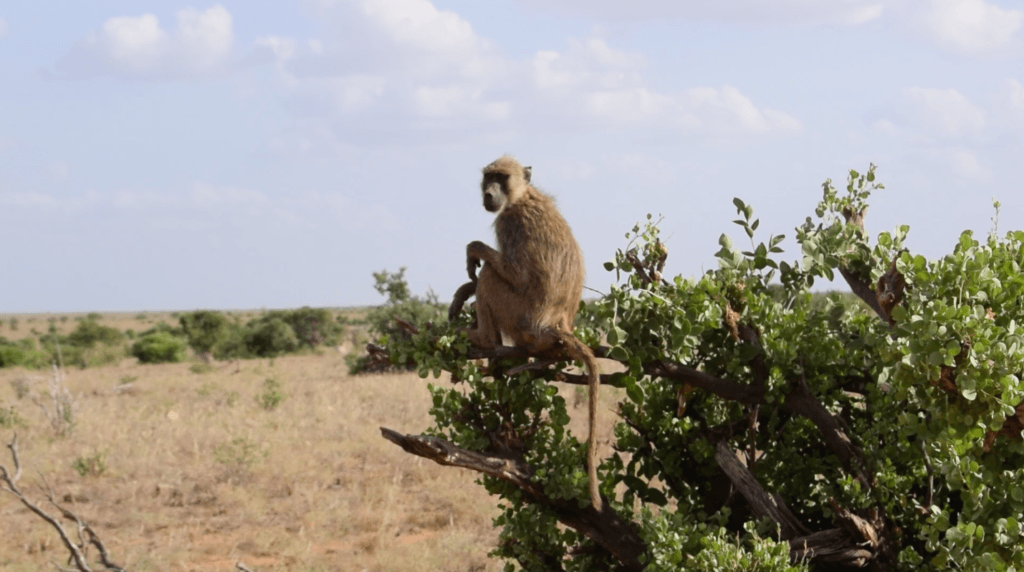 A baboon seems surprised to see us

After that we saw an abundance of zebras, antelopes, monkeys and giraffes. Driving along the river our guide told us to keep an eye out for hippos, for those with an untrained eye however this is really hard. We stopped a few times with the driver pointing out at what looked like shallow rocks, but when you look at it long enough realise it’s moving and it’s a hippo! We got to get out of the car at a “Hippo Point”, where you could walk down to the river to look at the hippos, we even saw a couple walk out of the water. Not going to lie, after all the stories of how hippos are more dangerous than lions, I was actually really scared. Fortunately it was all fine, we walked down to the river, saw the hippos and then back to the car.

A group of zebras grazing by the water

On return from the safari we went on a sunset walk along the river, accompanied by the Maasai from our camp. Walking in the savannah, compared to driving, was an even more magical experience, especially when accompanied by expert Maasai, who were pointing out all the traces of animals and told us stories of the area. If you want to find out more about the Maasai check out this article about life in a Kenyan Maasai village. We then closed the day with a lovely dinner under the stars. 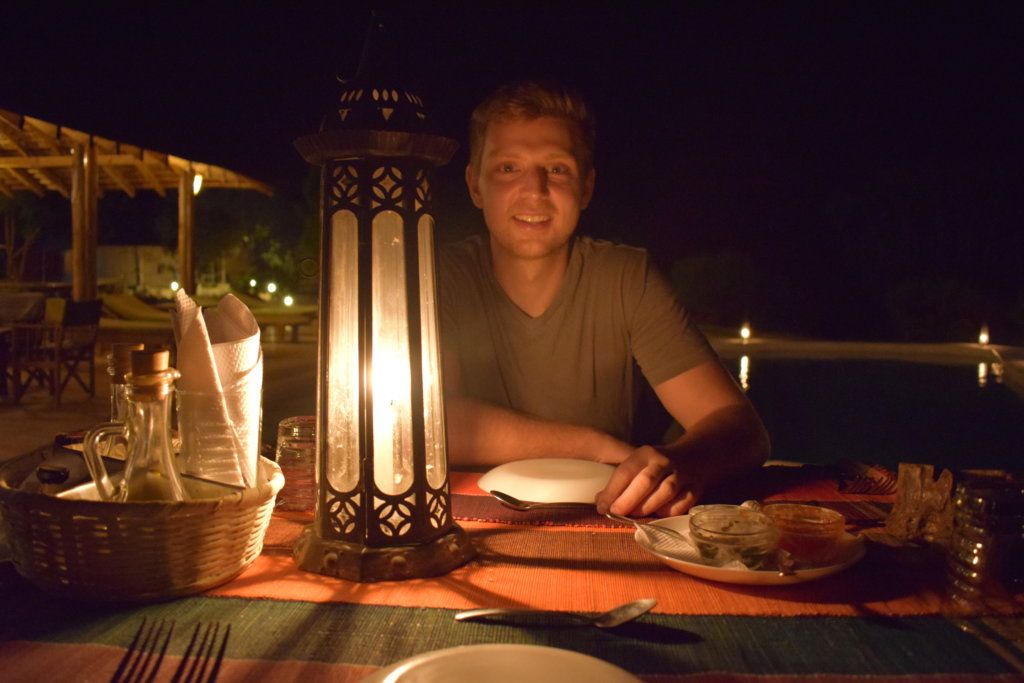 Dinner for two under the stars

Thank you Swara Osteria Camp for making it possible! Have you ever been on a safari? How did you find it? Let me know in the comments below! We spent the rest of our Kenya trip chilling at the beach in Malindi, where we were surprised to find white sandy beaches, beautiful clear water and reefs for scuba diving! If you need help planning your trip, make sure to check out this Kenyan safari packing list.

Enjoyed reading about our safari in the Tsavo East National Park, Kenya? Pin it! 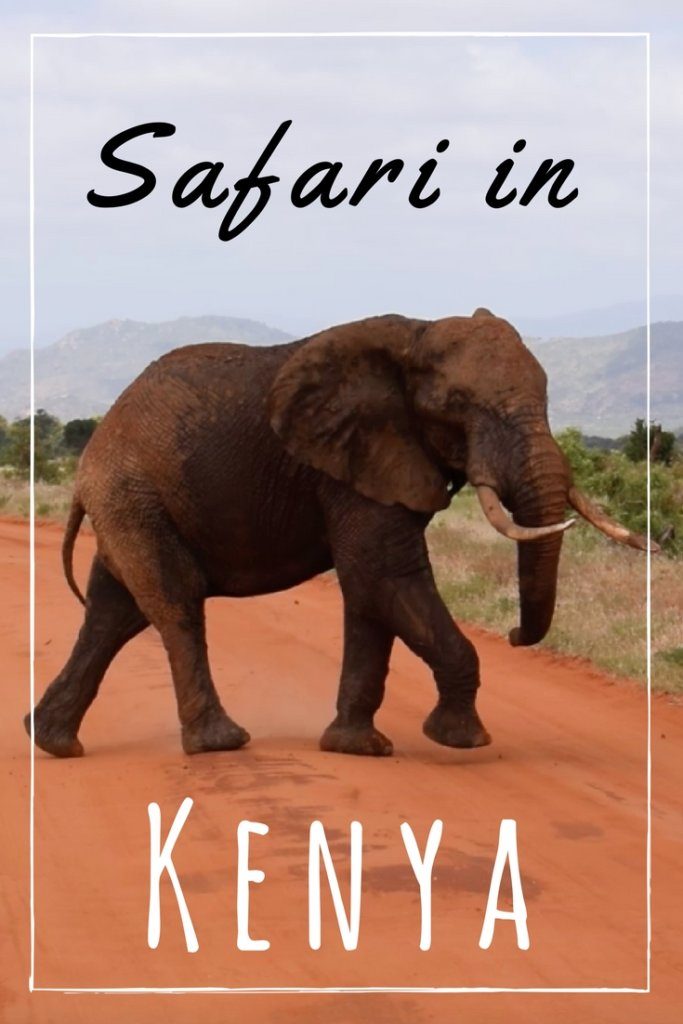 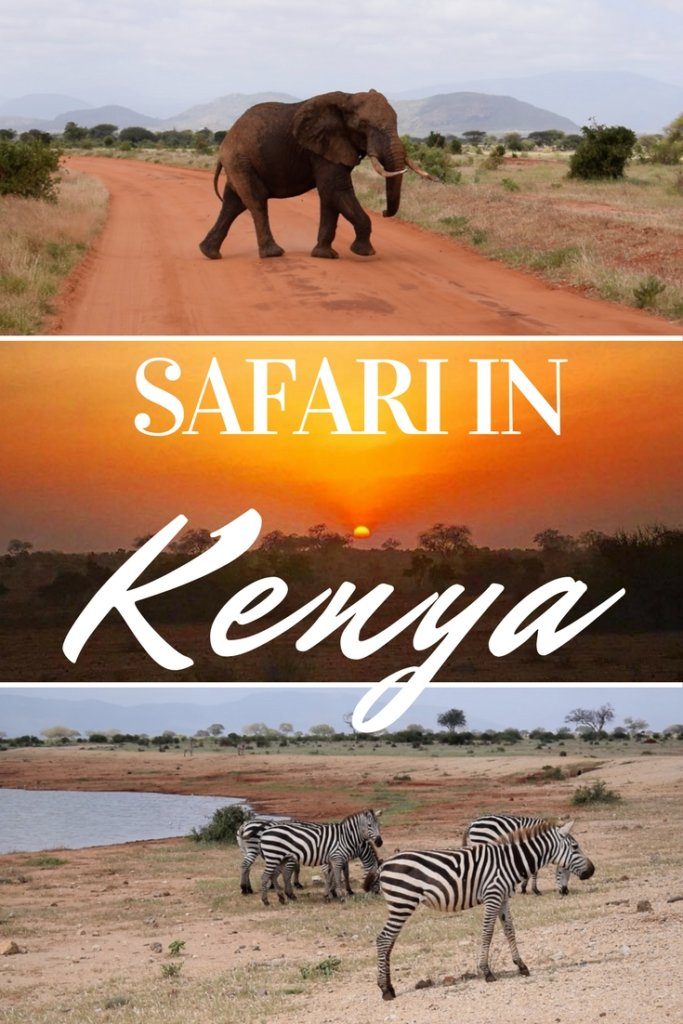 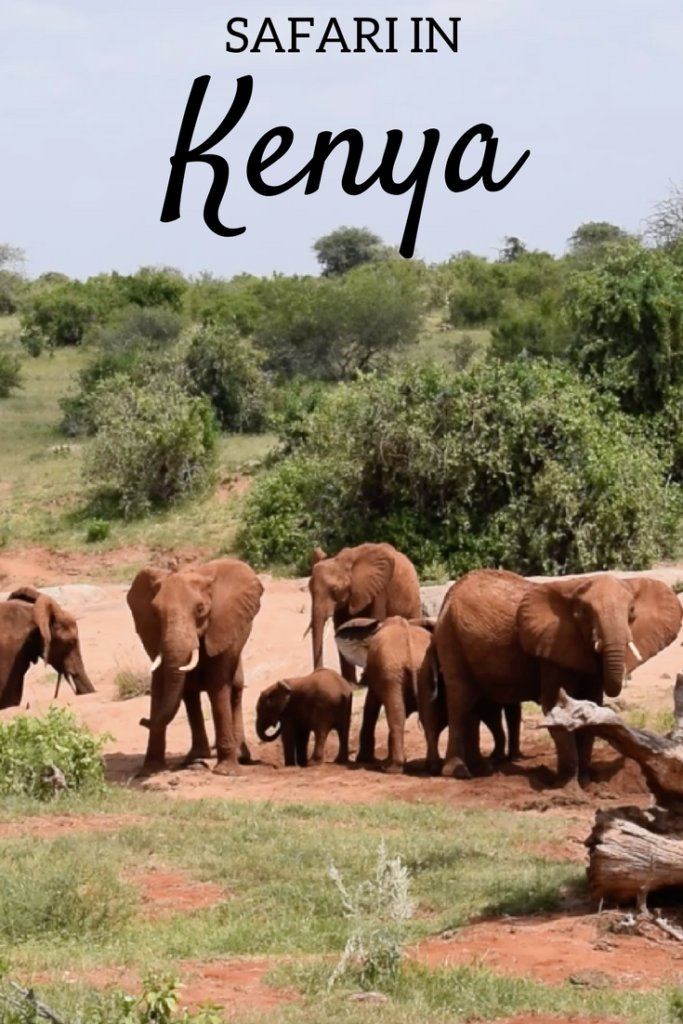