In the beautiful vastness of the Atlantic ocean lies the Azores archipelago. This cluster of volcanic islands belongs to Portugal and is made up of nine islands.

Characterised by crystal-clear waters, it’s regarded as one of the best places for whale watching in the world.

Many fascinating cetaceans (aquatic mammals) swim freely around the islands. Some are resident species, while others pass through on their yearly migration.

If you’re travelling to the Azores, this guide contains everything you need to know about whale watching. 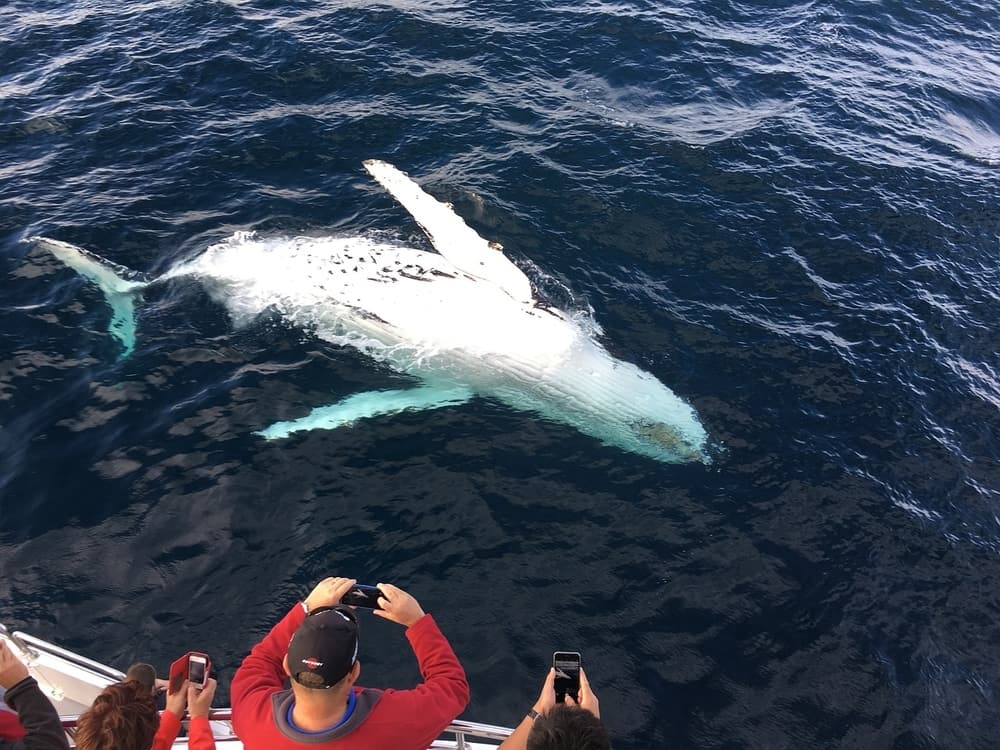 Whale watching season in the Azores archipelago is from April to October. This is when many different whale species pass through on their annual migration.

The months of April and May yield the highest number of whale sightings, while October is the best month for spotting humpback whales.

With that said, you have a great shot at seeing whales any time of year. I was there in August and had little hopes of seeing whales out of season, but I was pleasantly surprised!

Even in August we were able to see loads of dolphins and even some big sperm whale tales poking out of the water and splashing about. 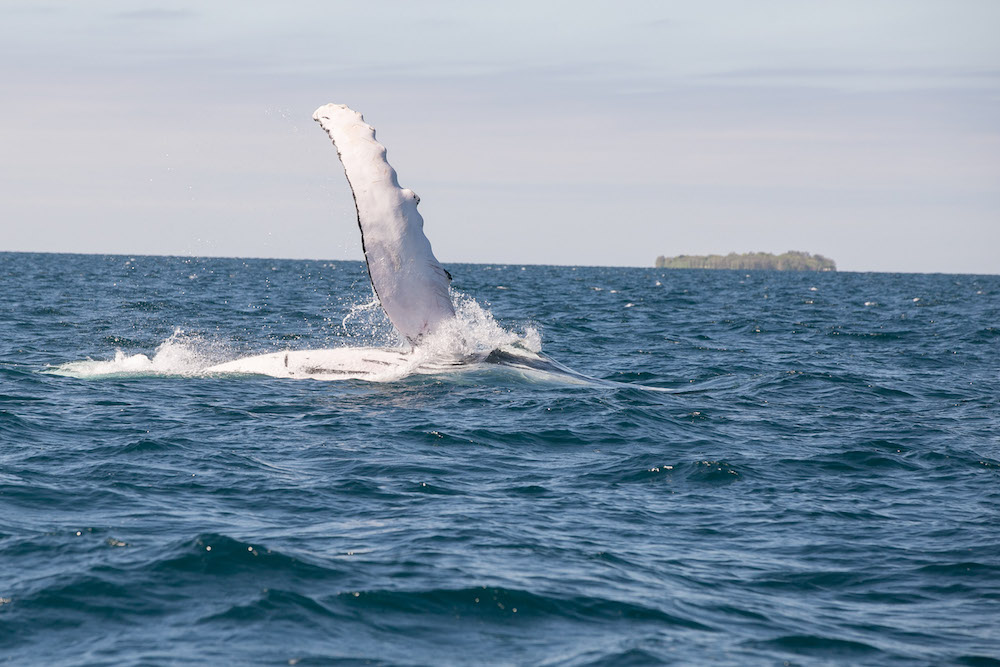 The most frequently spotted Azores whales

The Atlantic ocean surrounding the Azores is home to many captivating whale species. Here are the most common types to keep an eye out for, and the best months for spotting them.

Sperm whales live in the waters around the Azores islands year-round. They are the resident species and are frequently sighted, especially during the warm summer months (June – August).

These large creatures hold some pretty impressive records. They’re the largest toothed predators in the world and have the biggest head and brain of any mammal in the world.

Sei whales (pronounced ‘say’) are regularly seen from March to July as they make their northern migration. They usually travel alone or in small groups.

Their dorsal fin is tall and located at the lower two-thirds of their body. They also have two blowholes instead of just one. 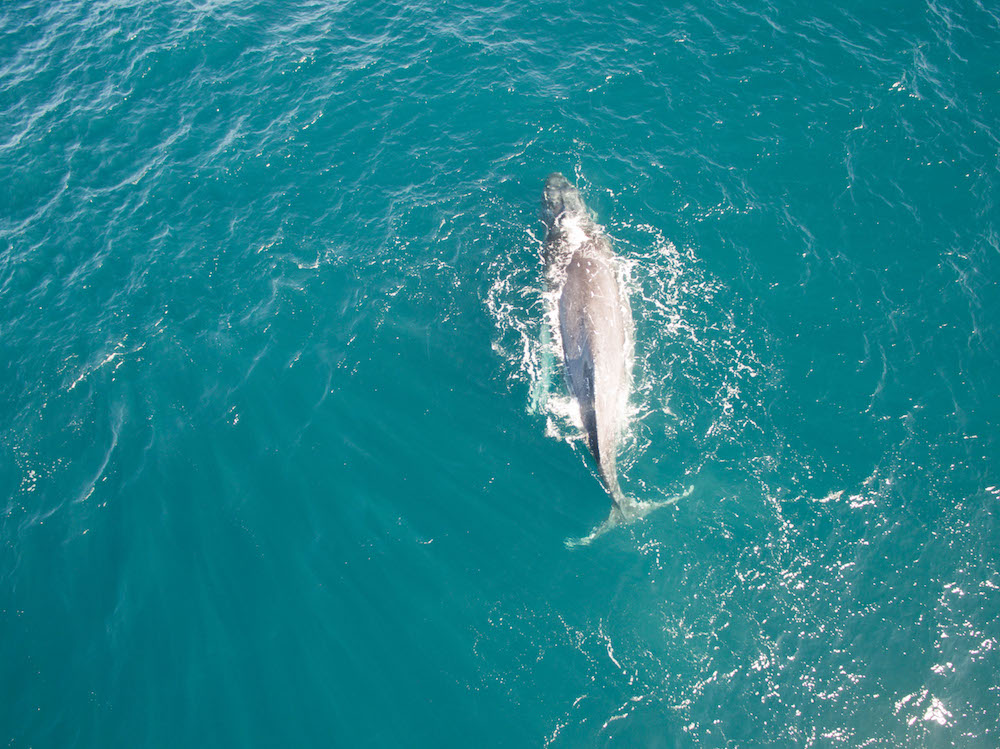 Drone shot of a whale – Photo by Matt Hardy on Scopio

Fin whales are one of the fastest whale species. They’re able to reach speeds up to 47 kilometres per hour. Because of their speedy swimming abilities, they’ve earned the nickname “greyhounds of the sea.”

They’re also the second-largest whale species on earth, after the blue whale. Fin whales are most prominent in the Azores from March to June.

Pilot whales are commonly sighted from April to October. They mostly reside in deeper waters and are often spotted near sperm whales and dolphins.

They’re very social creatures and form strong permanent bonds. They like to hang out in larger groups of 15 – 50, or sometimes even hundreds! 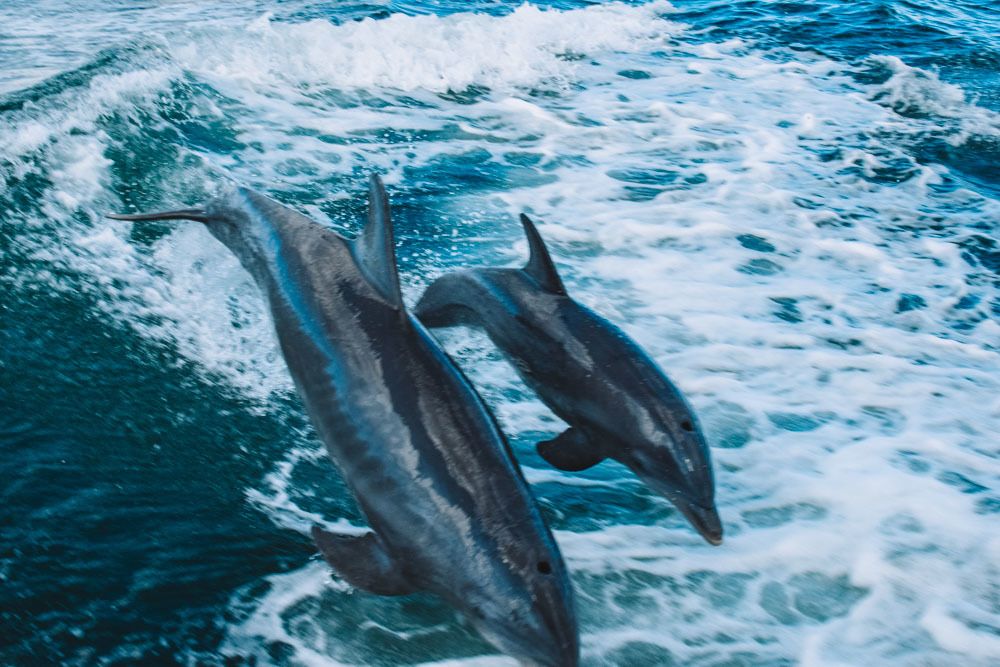 Popular islands for whale watching in the Azores

There are nine main Azorean islands. Whale watching is possible from most of them, but the most popular are São Miguel, Terceira, and Pico Island.

São Miguel is the largest and most touristy Azores island, followed closely by Terceira island.

Pico island is less touristy than the other two and offers a more rugged and unspoiled landscape. It also contains Ponta do Pico, the highest mountain in the Azores.

We did our Azores whale watching tour in Pico Island and can highly recommend it. 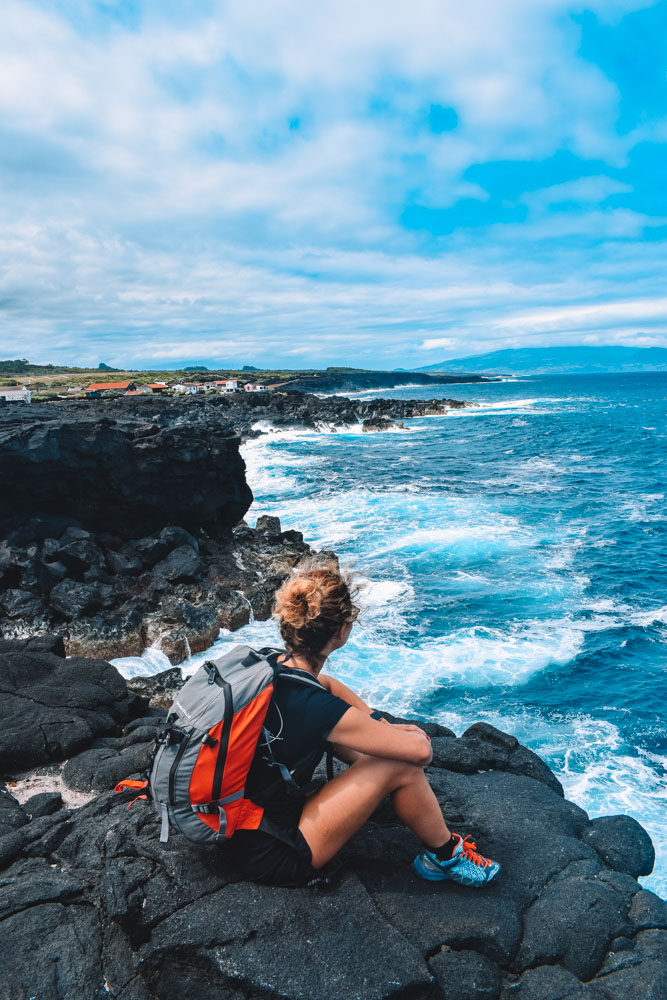 The Azores is one of the best places to witness cetaceans in their natural habitat. Although nature makes no promises, you’ll have a great shot of seeing whales with a whale watching Azores tour.

Cruise around the Azores on this exciting marine wildlife expedition from São Miguel. Keep your eyes peeled for sea creatures, including whales, dolphins, turtles, fish, and bird species.

Your professional guide will provide commentary about the incredible biodiversity of the archipelago.

The boat trip includes a tour around the breathtaking Princess Ring Islet of Vila Franca do Campo. Admire this unique volcano up-close and see if you can spot the terrestrial wildlife that inhabits the area. 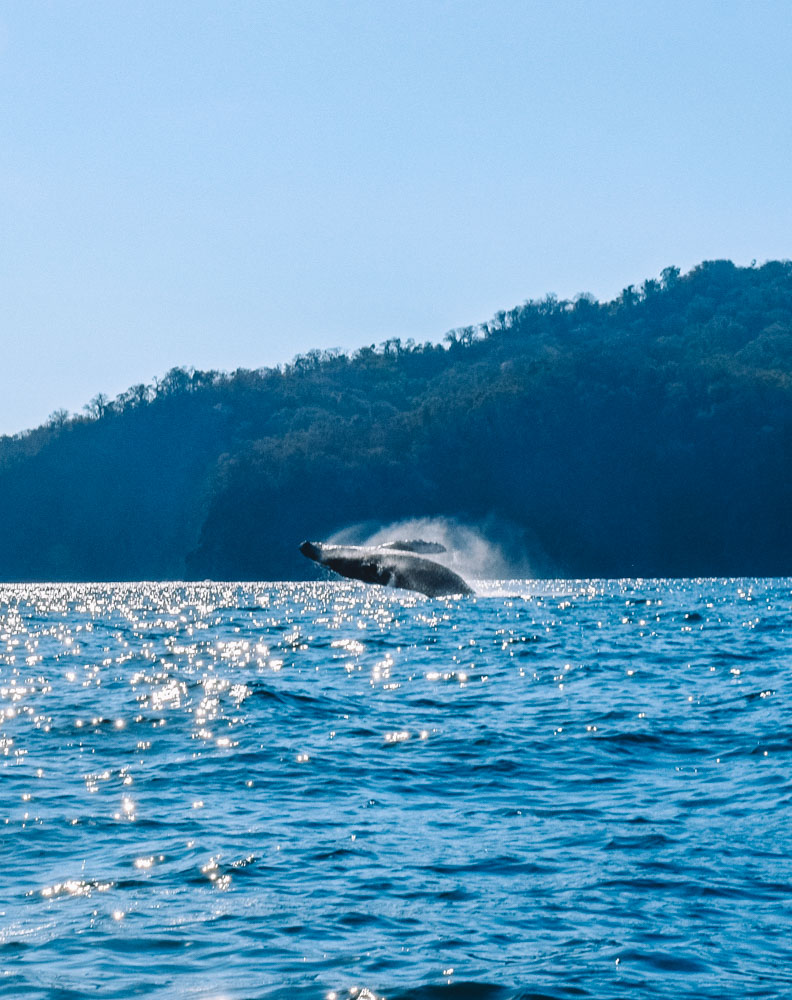 One of the whales we spotted during our whale watching tour

If you’re visiting Ponta Delgada, the capital of the Azores archipelago, this whale and dolphin watching trip is for you. Set off on an ocean excursion and see if you can spot some of the sea’s most magnificent mammals.

Keep your eyes peeled for whales, dolphins, turtles, and more.

Your marine biologist tour guide will make your trip both fun and informative. You’ll gain a whole new perspective on the fascinating Azores whale species.

Click here to book your whale and dolphin watching trip from Ponta Delgada! 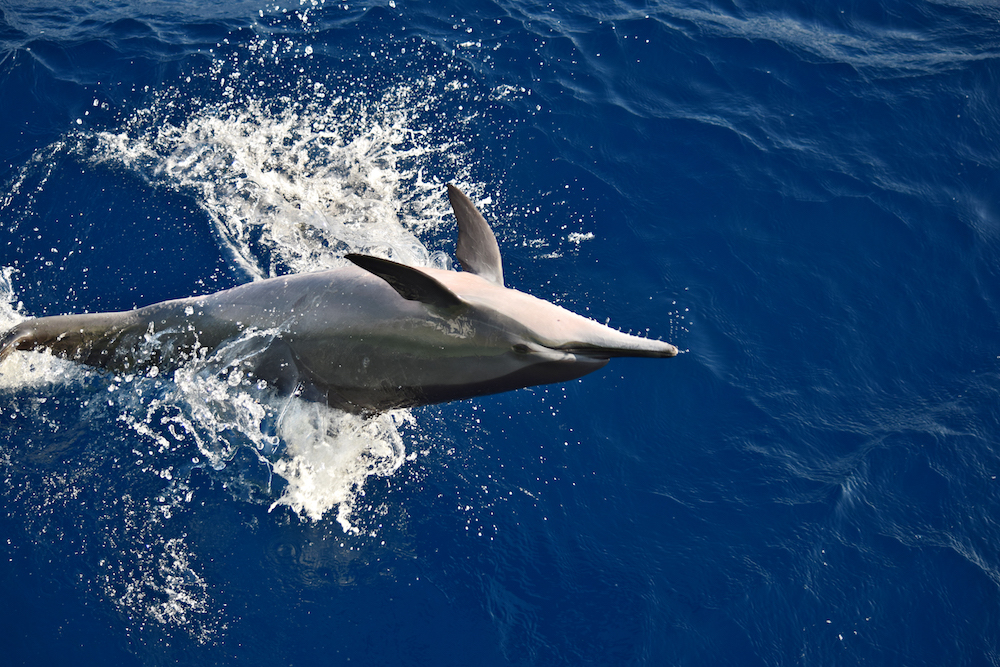 Enjoy a full day experience exploring the highlights of São Miguel, the biggest island in the Azores archipelago.

Start your morning on land. Visit the scenic hot springs of Ribeira Grande, the calming São Brás Lake, and other natural sights. You’ll also visit the Gorreana Tea Factory for some locally grown tea and a picnic lunch.

In the afternoon, head out to sea for your whale watching activity. Whales and dolphins are commonly seen during the tour, as well as turtles, seabirds and other marine life.

If you’re visiting Terceira Island, this exciting whale watching and jeep tour combo offers the best of both worlds.

Start the day whale watching in the middle of the Atlantic ocean. Next up, see the real Terceira as you travel through the island’s rugged terrain by jeep. Go off the beaten track and pull over for a tasty outdoor BBQ lunch. 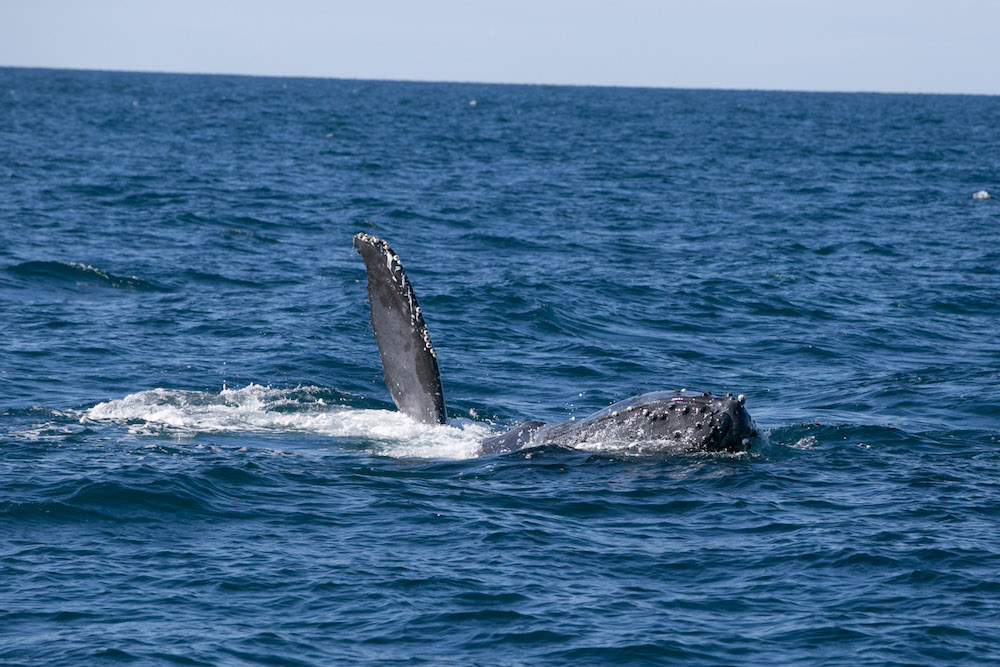 What to bring whale watching

Whale watching tours tend to be on fairly small boats, so as to not disturb the whales. The boat we did it with was a rubber speed boat, meaning that depending on the season and sea conditions, you can get quite wet.

Our tour gave us water proof jackets so that we could keep our clothes under dry. That said, here are some things you might want to think about bringing with you to make the most of your Azores whale watching trip.

Camera with zoom lens – How close you get to the whales ultimately depends on the captain. If you want to capture epic shots even from a distance, you will need a proper camera and zoom lens. 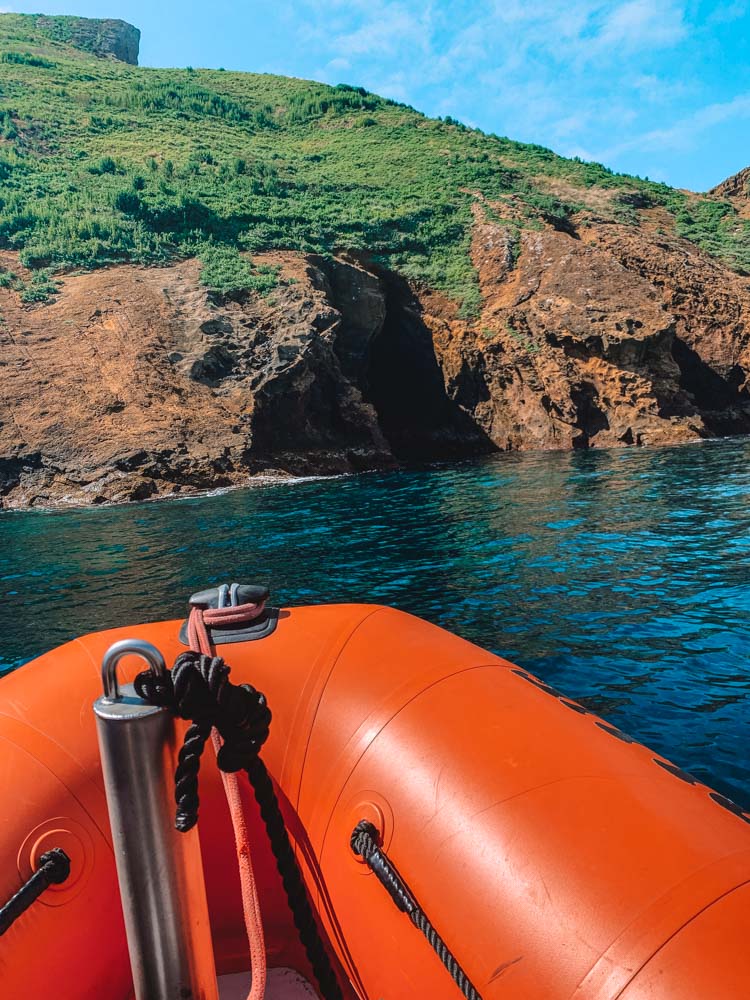 A whale-watching excursion is a must for any nature lover. Imagine being out in the middle of the Atlantic ocean and spotting a graceful whale casually swim by.

It’s an indescribable experience, and one you don’t want to miss when visiting this beautiful Portuguese archipelago.

Even though the Azores whale watching season is from April to October, there are resident species that call these waters home all year long. Make sure you pack a video camera; this is an adventure you’ll want to capture on film!

I loved hiking in the Azores, but getting up close to these gentle giants was an even more marvellous experience.

Looking for more Portugal travel tips? Check out my other travel guides!

Enjoyed reading about whale watching in the Azores? Pin it! 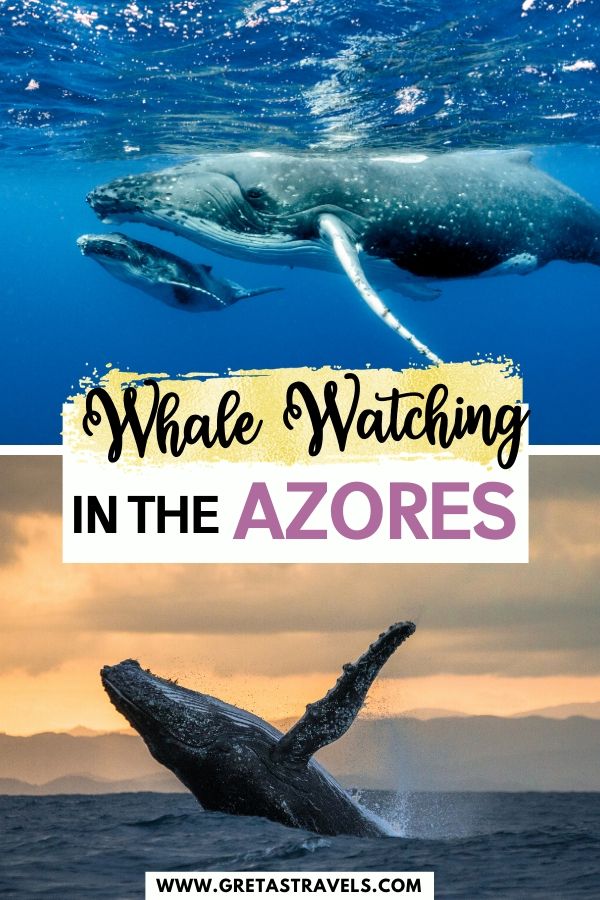