Ever since I got a GoPro I have wanted to take split half underwater photos.

After numerous failed attempts trying to balance my GoPro exactly on the water line I decided to properly look into it and I discovered I was missing an essential piece of equipment for over / under photography; a GoPro dome.

If you already own a GoPro purchasing a GoPro dome is the cheapest and best way to get those epic half underwater shots.

If you’re looking for advice on which is the best GoPro dome you should purchase, plus helpful tips for over / under photography, you’ve come to the right place. 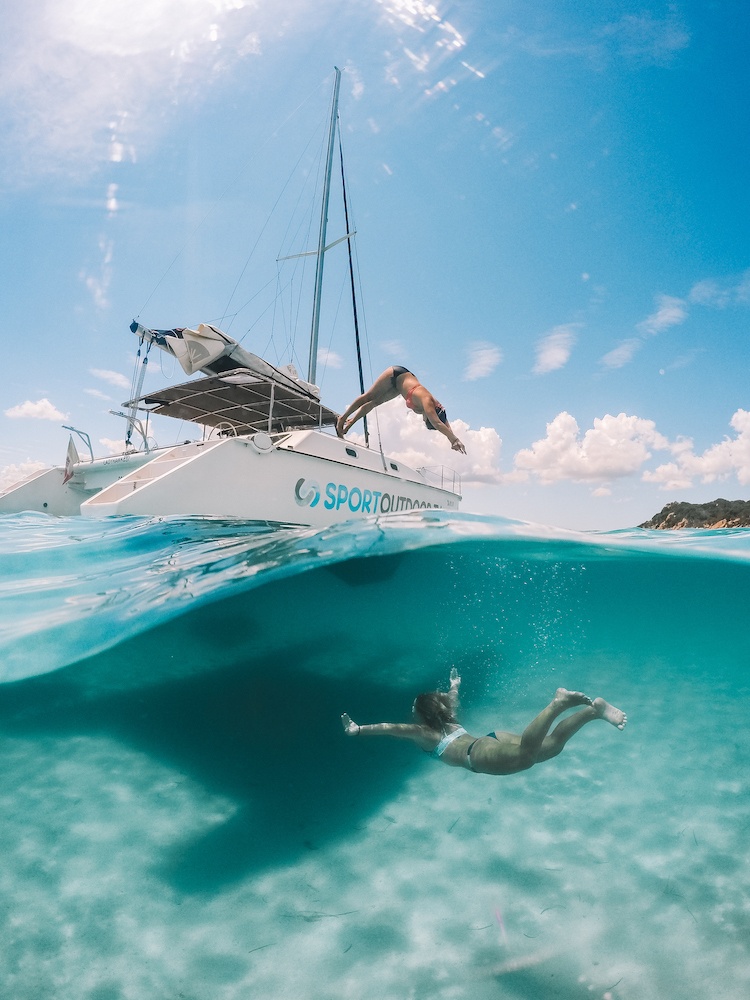 Choosing the best GoPro dome for you

GoPro dome ports are the cheaper alternative to waterproof cases for DSLRs, which are usually very expensive. They’re a great option for those looking to take epic 50 / 50 shots without breaking the bank.

Most GoPro domes are around the same price (check Amazon for the latest prices) so when you’re deciding which model to go for, price isn’t the only factor you need to take into account.

Compatibility – I’m not planning on changing GoPro any time soon so this isn’t a big one for me, however if you’re planning a GoPro upgrade you might want to get one which will work also for your next model. 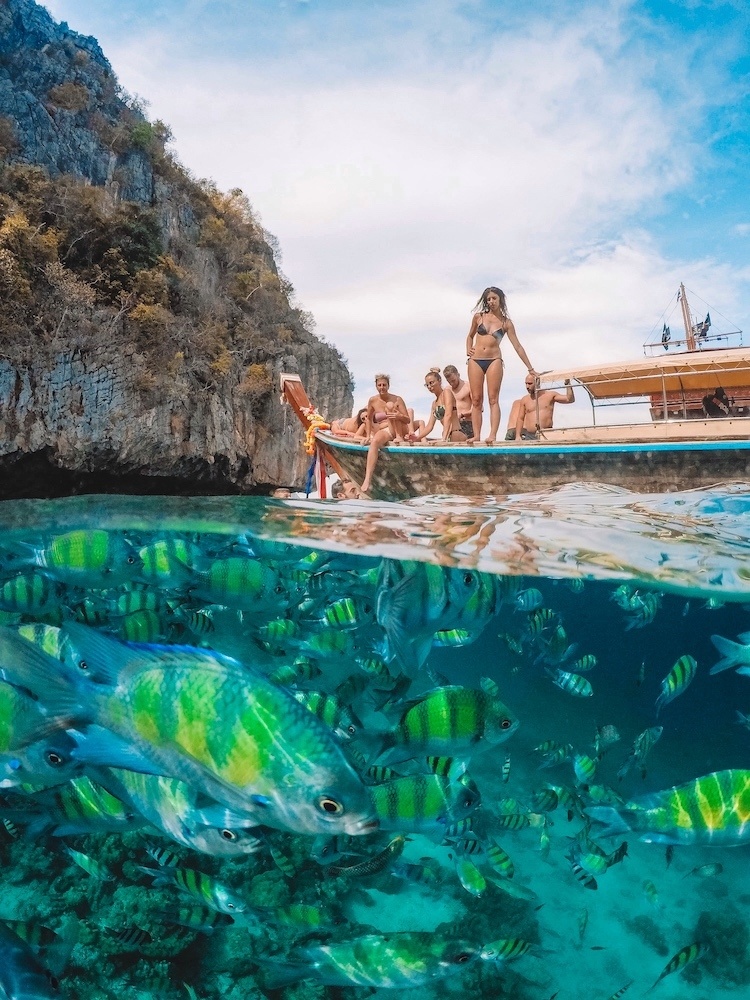 A half underwater shot taken in the Phi Phi Islands

Durability – How resistance is it really? Is it going to break after a couple uses and you’ll have to buy a new one or is it built to last?

Reviews by other users – Ultimately reading the reviews on Amazon is the easiest way to see if other people think it’s a valid product or not.

Can you see / touch the screen? – Because of the way some domes are built you might be unable to see and touch the screen. This can make it very hard to figure out what you’re capturing and mean you have to take loads of photos to ensure you have at least one good one. 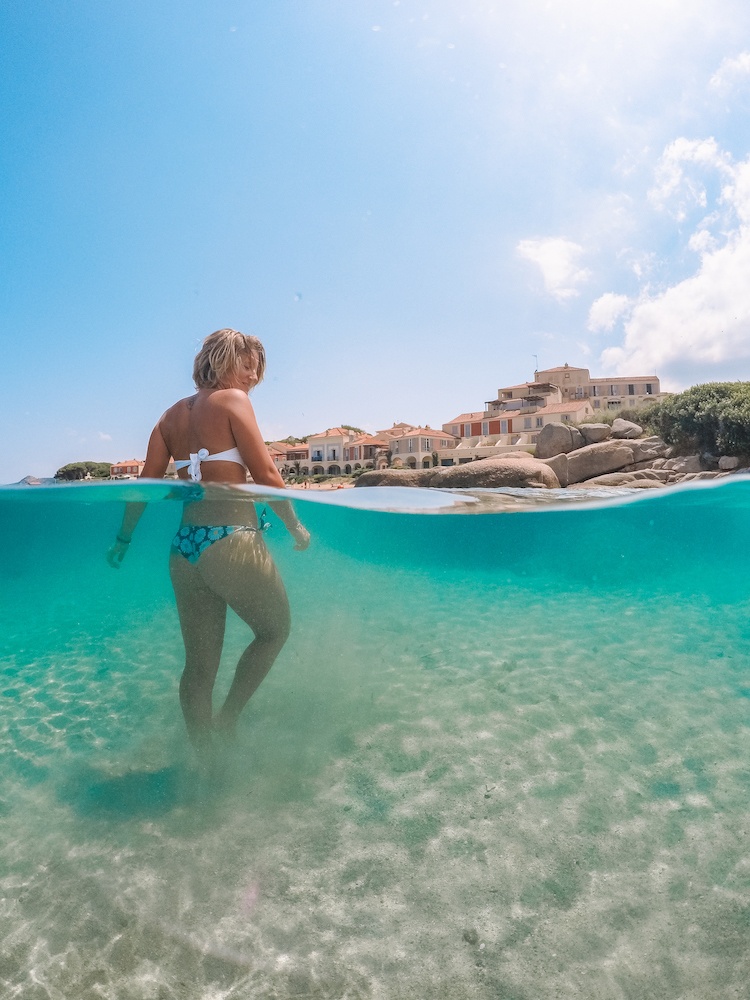 I personally use the Telesin 6 ” T03 GoPro Dome and I think it’s the best investment I’ve made in terms of GoPro accessories and camera gear.

The photos that you can take with a GoPro are fun, unique and give you a different perspective to an otherwise average shot.

All you need is a cliff, a friend with good diving skills, another friend that can swim underwater for at least 3 seconds, moderately clear water and you’ve got an epic photo right there.

I’m happy with the Telesin bundle I purchased since for roughly the same price as the domes from other brands it already included some of the extras I would have wanted to purchase anyway (e.g. a soft protective case and anti-fog inserts). 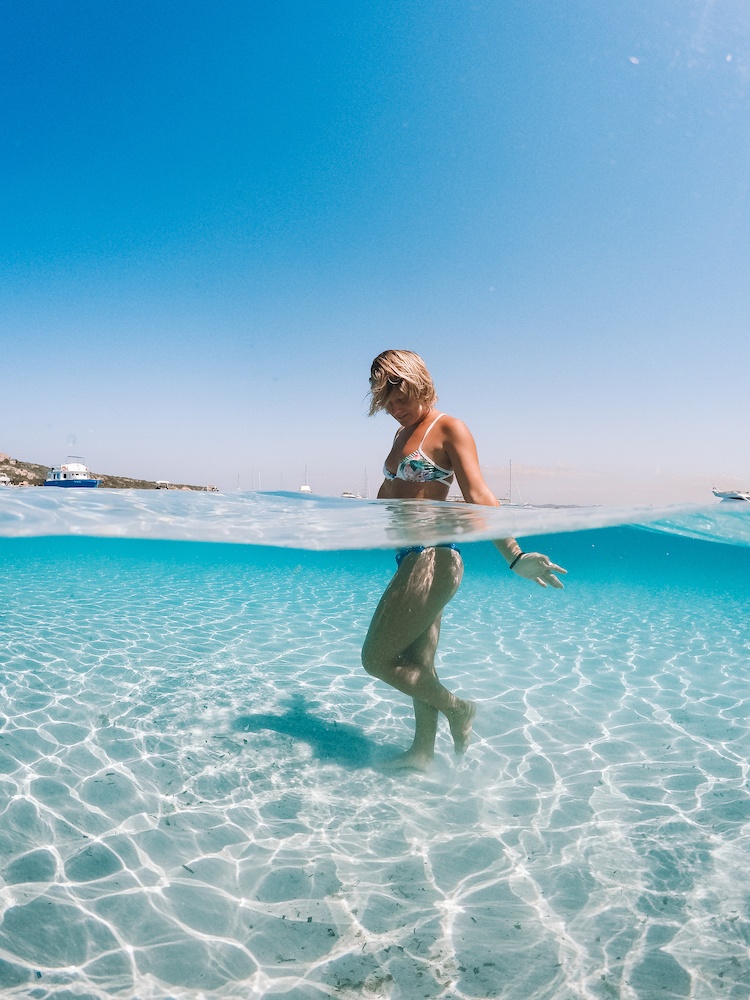 I also like that it’s got the option of shooting with the trigger pistol but also of using the simple floating stick.

I chose the GoPro Hero 4 Silver because it has a screen and I want to be able to see what I’m shooting, I don’t want to cover it up with a pistol.

I also like that it already comes with a waterproof case, unlike some other domes where you attach them around the case that is usually around your GoPro.

It’s a small thing but I’d rather only have one thing to carry around instead of multiple small pieces to put together. You can check out the latest prices on Amazon and purchase my same Telesin GoPro dome here. 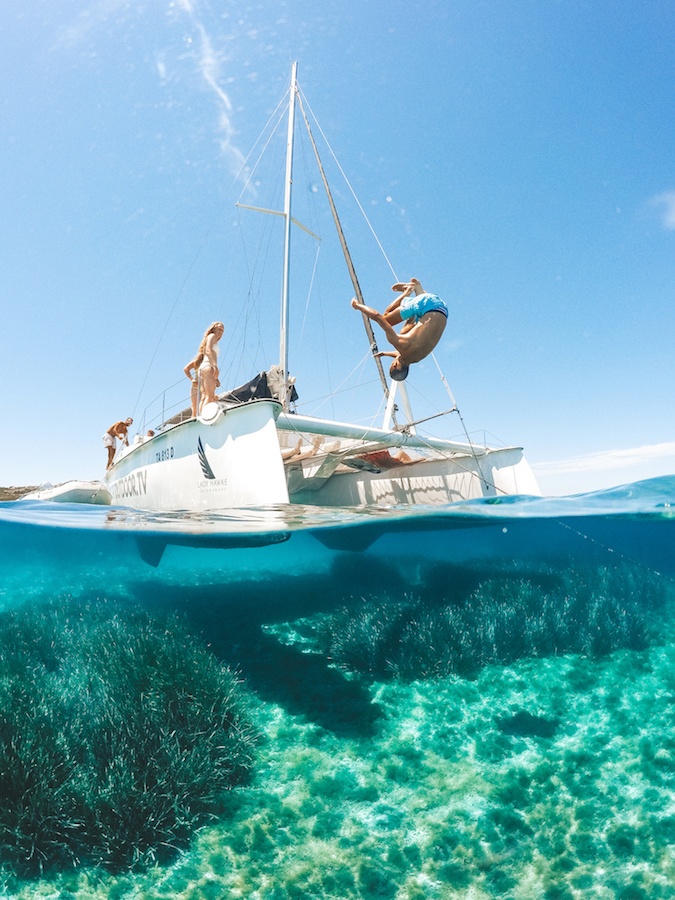 Using your GoPro Dome: Over / Under photography tips

Now that you’ve read my Telesin GoPro dome review it’s time to move on to the juicy stuff; my personal tips on how to actually use a GoPro dome to take epic over / under photos.

Set your GoPro on burst

With the Telesin dome you will have to get all your GoPro settings ready before placing the camera in the dome, as the main button on the front is no longer accessible after.

I always set my camera on burst and select the option to take 30 photos in 3 seconds.

Yes you will end up with a lot of bad photos you don’t need but setting your GoPro on burst is possibly the single most effective thing you can do to take good over / under photos. 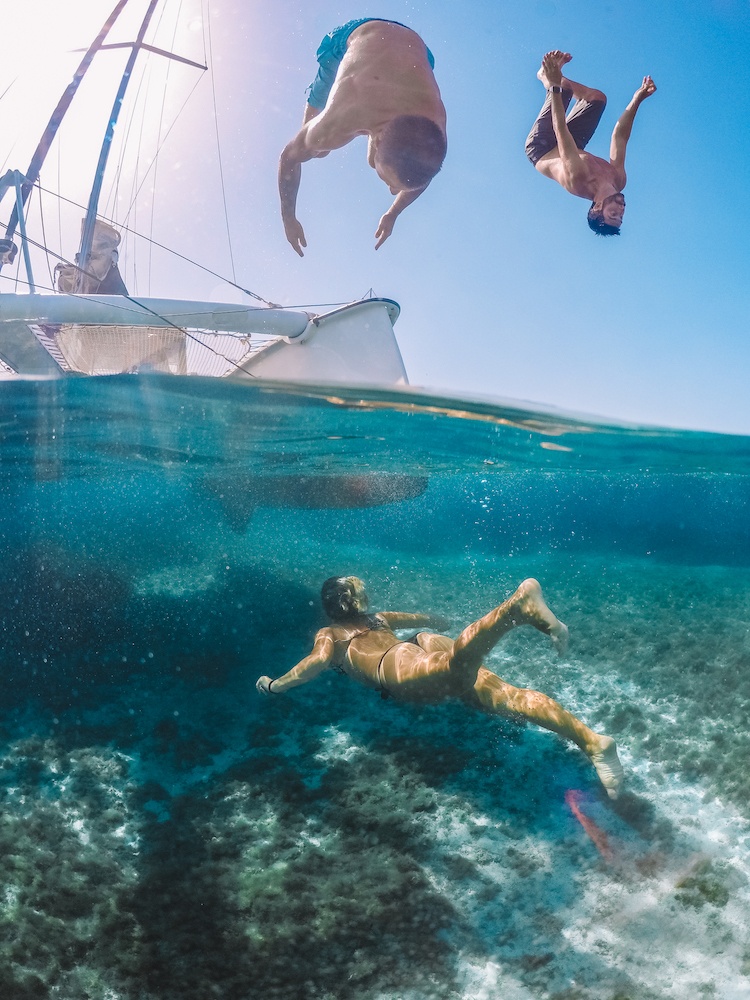 If you’re trying to coordinate a photo, for example with people diving over the surface and other people swimming below the water line, you’re more likely to get one good photo out of 30 instead of hoping in that one shot turning out good.

This is especially the case if you’re using it as sea, where moving waves can change the water line constantly and you can’t see what you’re capturing.

You can always delete the extras later. Your friends will never forgive you if you miss their epic back flip because it’s covered by a wave and you only took one shot. 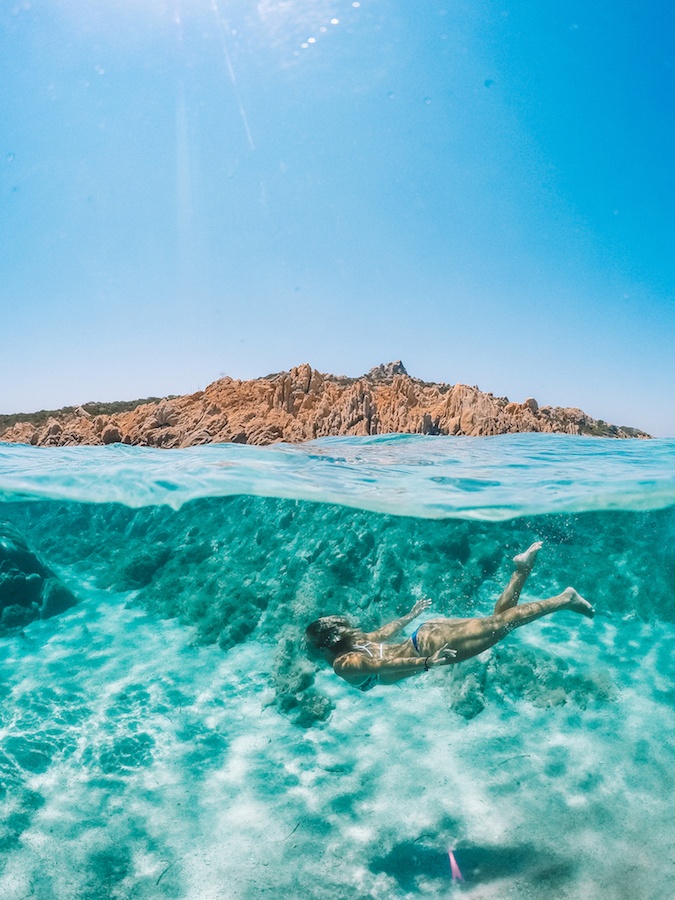 Use Rain X to remove water bubbles from the top half

I can’t think of anything that yells self-absorbed photo fanatic more than carrying around a water repellent spray to make sure your photos are spotless but hey, you’ve got to do what you’ve got to do (especially when it’s for the ‘gram)!

Water drops on the dry part of your dome are simply going to ruin your picture.

You can either try and hold the dome perfectly still so as to not get any water drops on the top half, or get yourself a Rain X (or similar) water repellent spray to remove the majority of the water drops.

A few drops will remain but nothing too big that can’t be removed in post-edit.

After all, you wouldn’t want to the person to ruin a perfectly choreographed shot like the one below just because you wanted to save money on a water repellent spray. 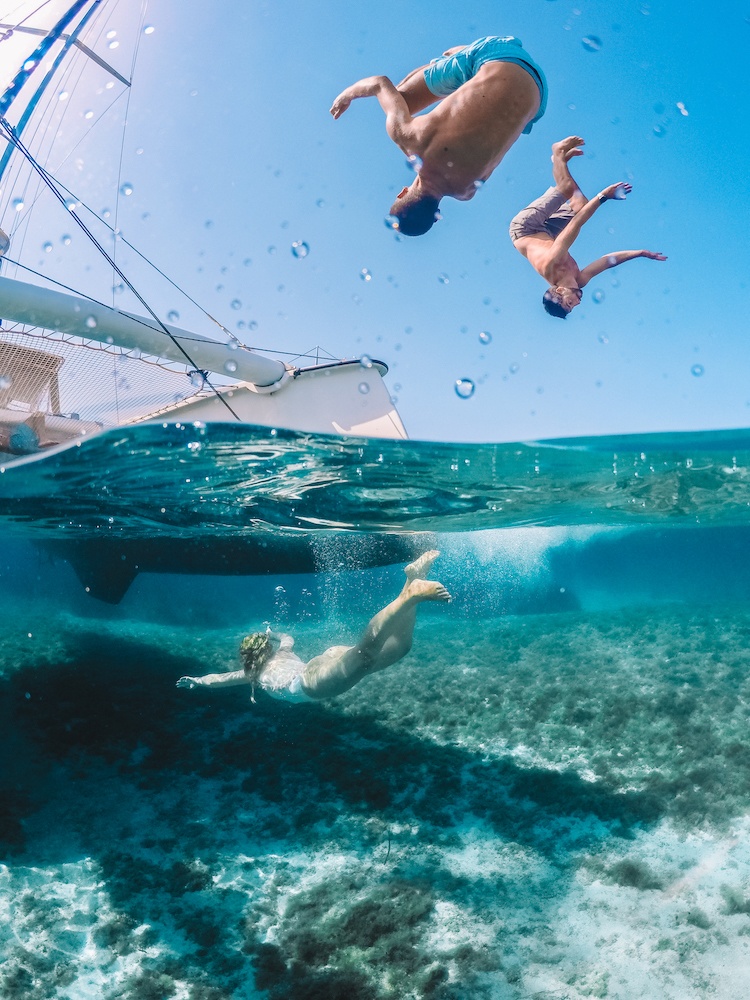 A perfectly timed over / under diving photo ruined by water drops

Shoot vertical instead of landscape

From a personal photographic point of view I prefer shooting over / under photos vertical instead of landscape.

This is purely my own preference but I find you can capture more of what is both above and below.

Landscape photos will show you more of the view and what’s around, but to see more of what’s under the water and above the water line you need to shoot vertical.

I have included below examples of the same shot in vertical and landscape so that you can see what I mean. 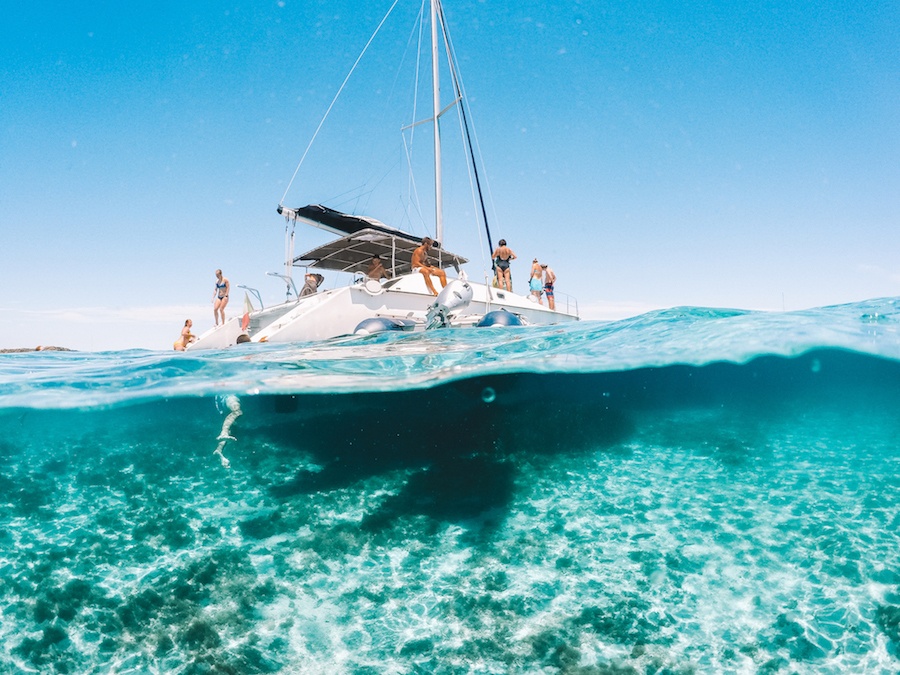 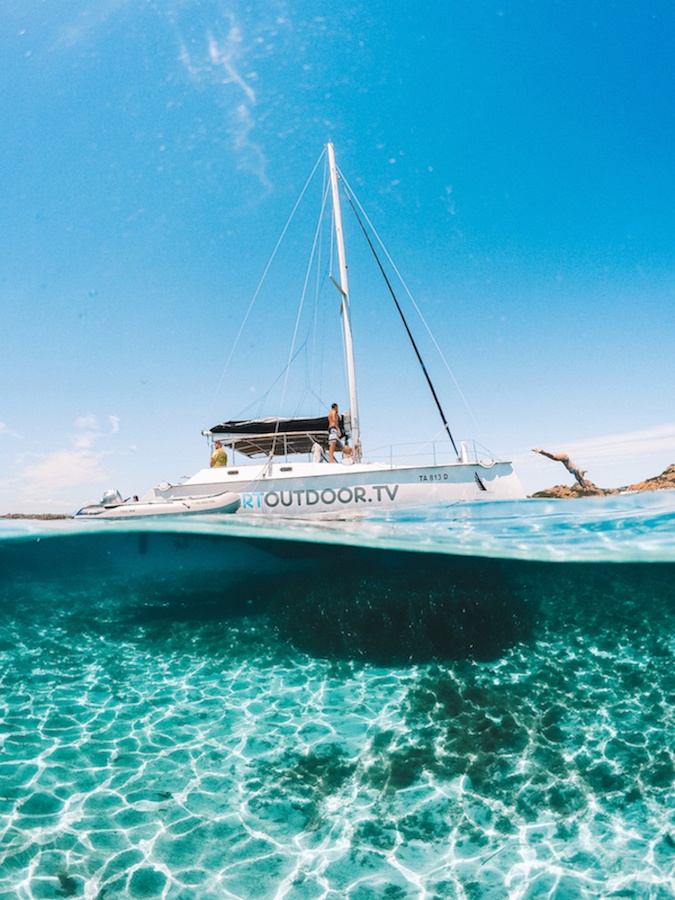 A vertical half underwater photo taken with a Telesin GoPro dome. Don’t you agree with me that it’s much better??

I haven’t actually done this one myself as I am not using the GoPro dome in a particularly hot or humid country.

However if you’re planning on using it in a tropical destination, make sure to add moisture strips to prevent your dome from fogging up.

Nobody likes foggy photos or having to unscrew the whole dome to clean it.

The Telesin GoPro Dome package I bought on Amazon included anti-fog strips, or you can purchase them separately here if you’re choosing a different GoPro dome. 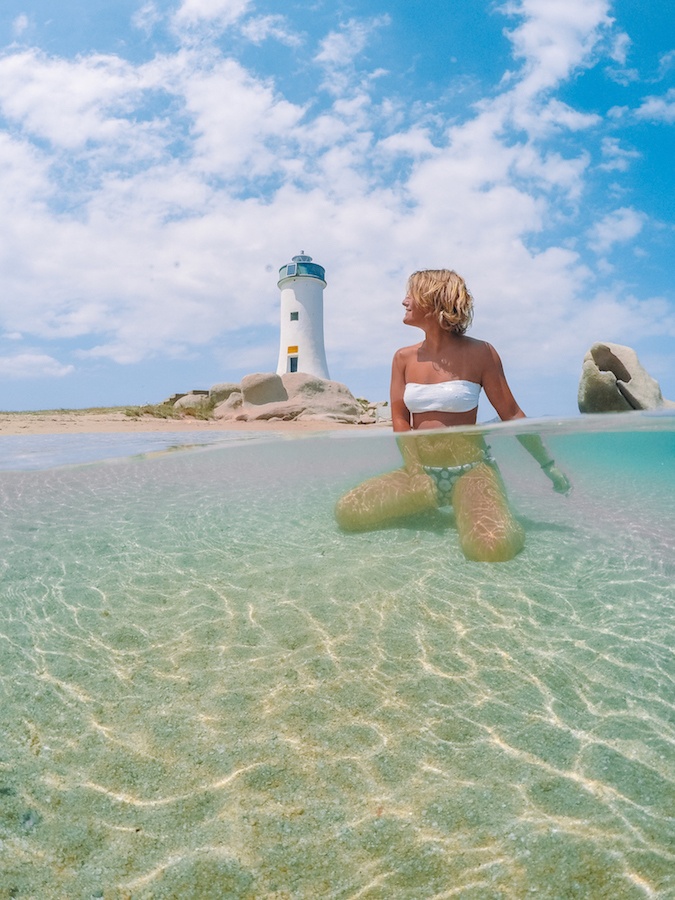 Post edit to remove water drops + brighten below the water

Despite the Rain X you’re bound to get some water drops on the top half of your dome, but worry not, it’s nothing that Adobe Lightroom or Photoshop can’t fix!

Besides removing water drops I always edit my over / under GoPro photos as I find the GoPro doesn’t always capture the clarity and definition you see in real life.

I have included a before and after shot below. I edit all my photos on Adobe Lightroom with my own presets that you can check out here. 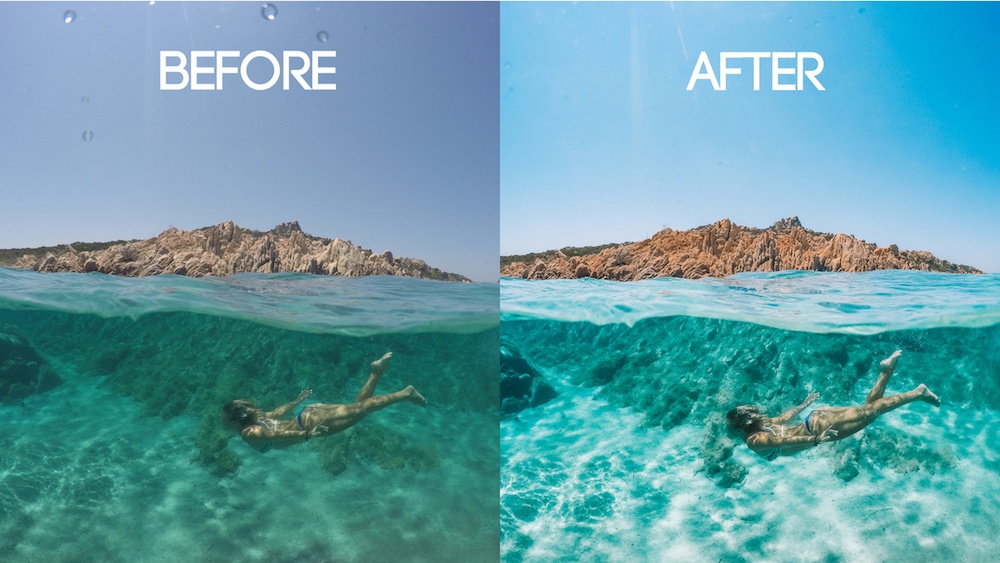 Always store your GoPro dome in a soft cover

When you’re done taking epic split photos make sure to rinse your dome and put it away wrapped up in a soft and protective cover.

Don’t just chuck it in your backpack. That’s how you end up with permanent scratches that will show up on all your photos from then on.

Similarly to the anti-fog strips the Telesin GoPro Dome package I purchased came with a cover but you can also get cheap ones on Amazon separately. 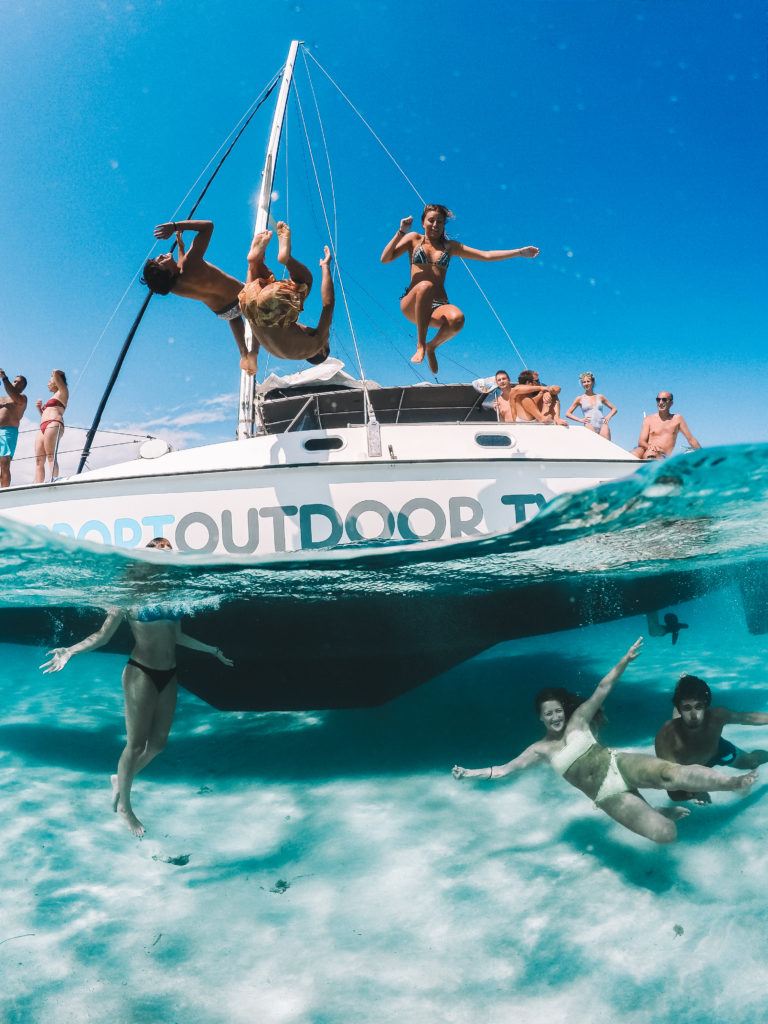 Coordinating 50/50 shots with my friends and a GoPro dome

Do you also use a GoPro dome to take photos over / under water? Let me know in the comments below!

If you have additional tips for split photography please comment below, I’d love to hear them! I tried to include all my top GoPro dome photography tips based on my experience, but there might be things I missed.

I hope you have found this post useful in helping you identify the best GoPro domes and decide which one to purchase, and that it will get you started with over / under photography.

Enjoyed readying my guide to the best GoPro domes for taking over / under photos? Pin it! 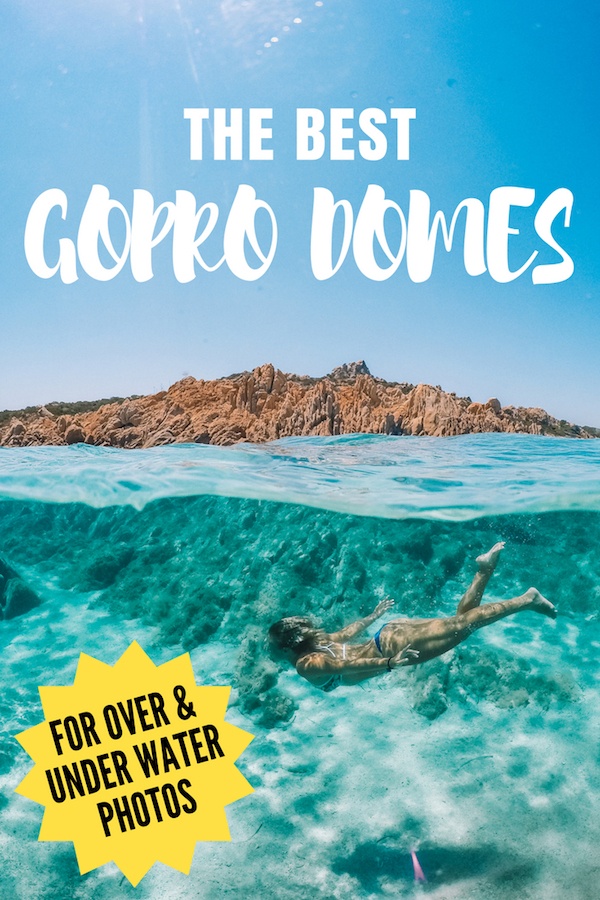 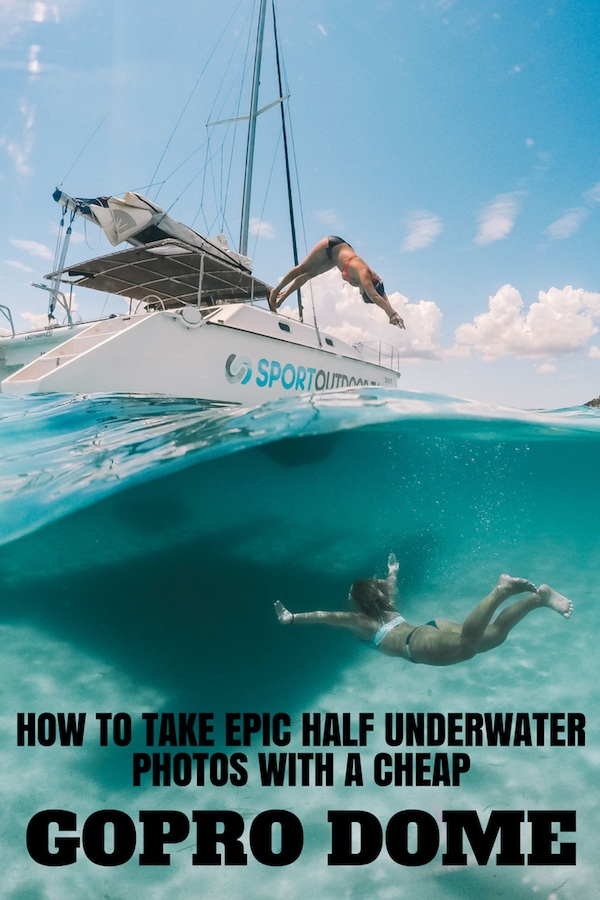 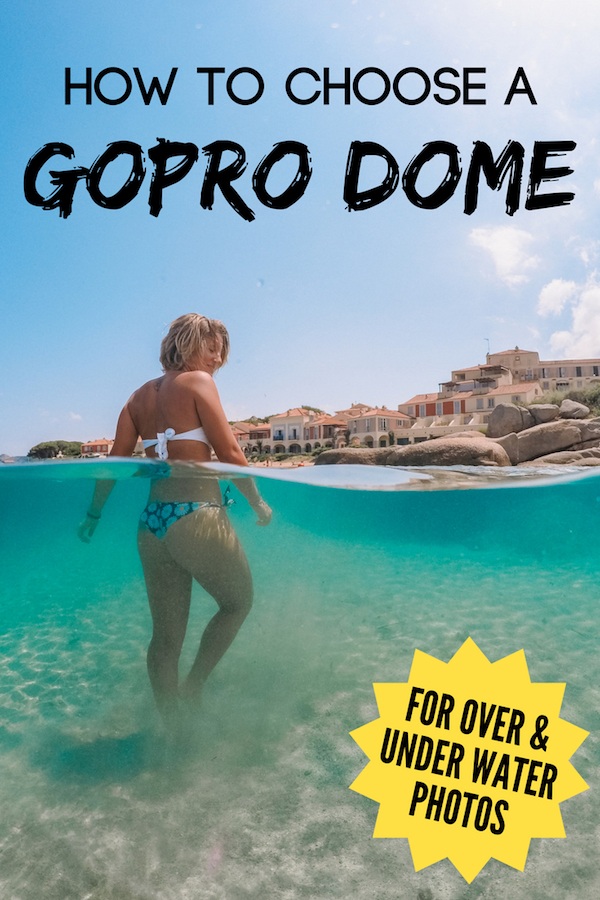 Do you use the rainx plastic or rainx glass?

Hi, just wanted to know during travel do you put the Dome with your carry on bags or in your checked in luggage at the airport?

What about a dome that fits a Hero 8?

Many thanks for your sweet review and advice.

Hello good day. First I would like to thank you for the tips. In this post In the part where you talk about "Post edit to remove water drops + brighten below the water" you inform that edit all you photos on Adobe Lightroom with your own presets. but the link redirects to a singapore post. could you tell me which link to check your presets?