With the continuous improvements in drone technology, which are making them increasingly cheaper and easier to carry around, there has been an increase in drones as the latest travel accessories.

After all, if you’re travelling to a beautiful destination it’s just natural that you would want to capture it from as many angles as possible.

With so many drones on the market though, how do you decide which one to go for?

I’ve teamed up with other travel blogger to bring to you a compilation of the best travel drones, reviewed by travellers that actually use them and travel with them.

I hope you find this guide useful in helping you decide which one is the best travel drone for you. 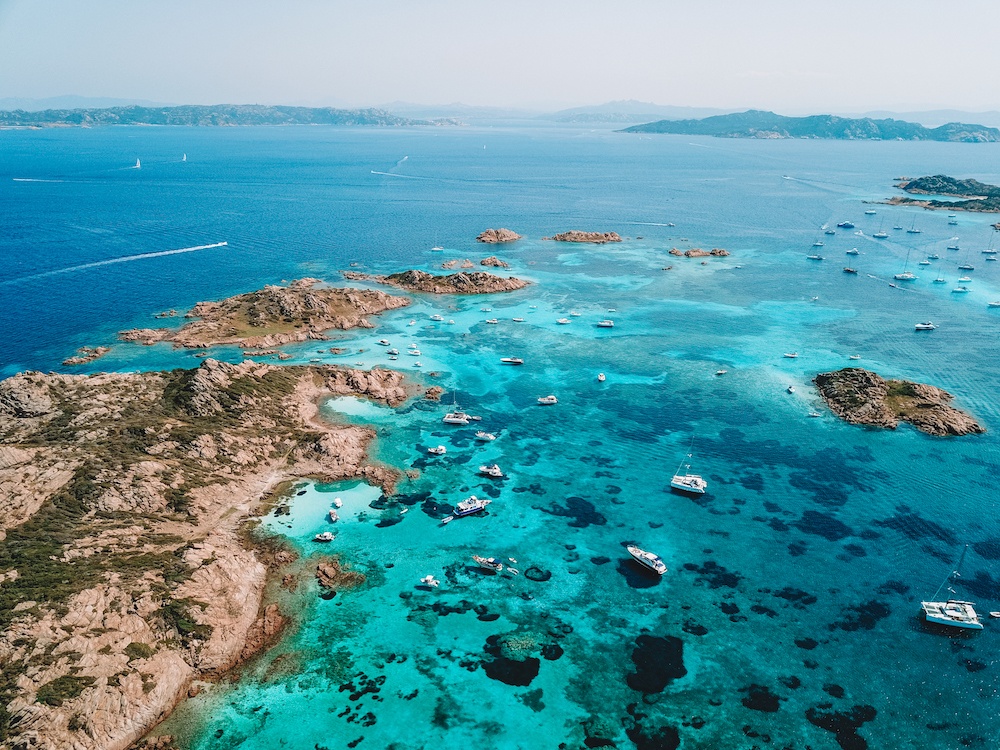 The natural pools of the Archipelago of Maddalena in Italy, shot on DJI Mavic Pro

What to look for in a travel drone

Before we jump straight into the review of the best camera drones for travel, I wanted to go over some essential information that I think you need to take into account when selecting your travel drone.

This is an extremely big factor when it comes to purchasing a travel drone, which you might not need to take into account if you’re just planning to use your drone at home.

I usually only travel with one carry-on suitcase and one backpack.

For me, it was pretty essential that my travel drone fit in my usual packing method, without taking up too much space or becoming an inconvenience to carry around. This might be different for everyone 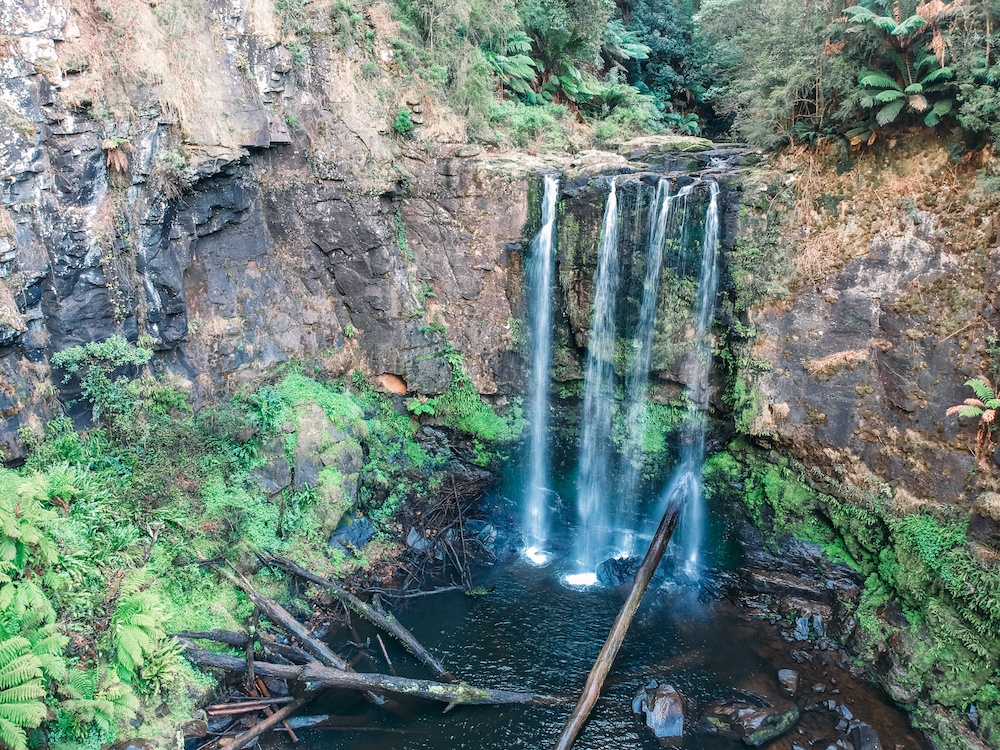 How much flight time you have actually have is pretty essential when selecting your travel drone.

Assuming that you’ll be using it on the road, you want something that will last a decent amount of time, and not that will die while you’re just about to capture your mate jumping into a waterfall.

You can always purchase more than one battery and bring spares with you but it’s better if the initial battery life is good in itself.

If you’re purchasing a drone to take with you while travelling, I’m guessing you want it to capture epic photos and videos of the beautiful places you’re visiting, not just for flying around and pretending you’re a pilot.

In the former case you will want one that has a good photo and video quality so that you can show off the places you travel to at their best. 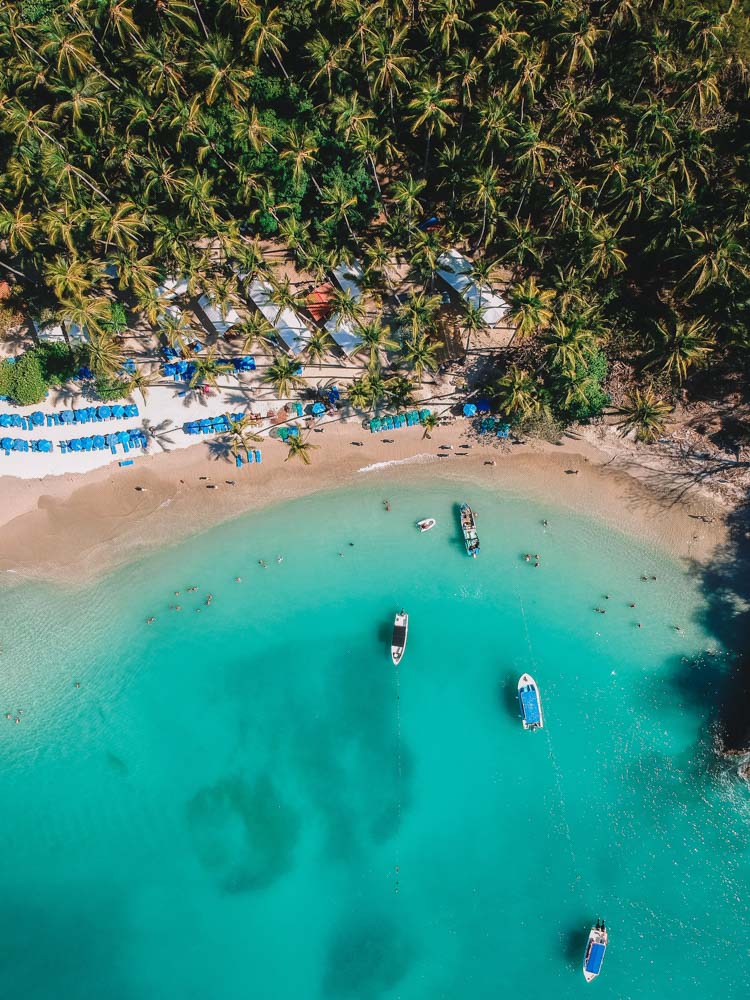 The photo and video quality requirement leads me on to the next item on my drone checklist; is the camera included in the drone?

This might seem like an obvious one but not all drones come with an incorporated camera. For example the GoPro Karma can be purchased as just the drone flying structure, and you then attach your own GoPro to it.

I’m not saying that one is better than the other, but just something you should take into account in your budget if you then need to also purchase a camera separately.

Drones are becoming cheaper but they are still quite an investment.

I know it took me forever to pick one I was sure about because I didn’t want to spend loads of money for something I didn’t know how to use, would most likely crash one day, and that couldn’t take the footage I wanted.

Once you find a model that ticks all the boxes for the previous requirements, you need to make sure it fits the price tag too.

If you’re a beginner at drone flying I would recommend going for an older model, which will usually have most of the functionalities of the new ones but will be slightly cheaper, so you don’t feel like you wasted your money if you crash it. 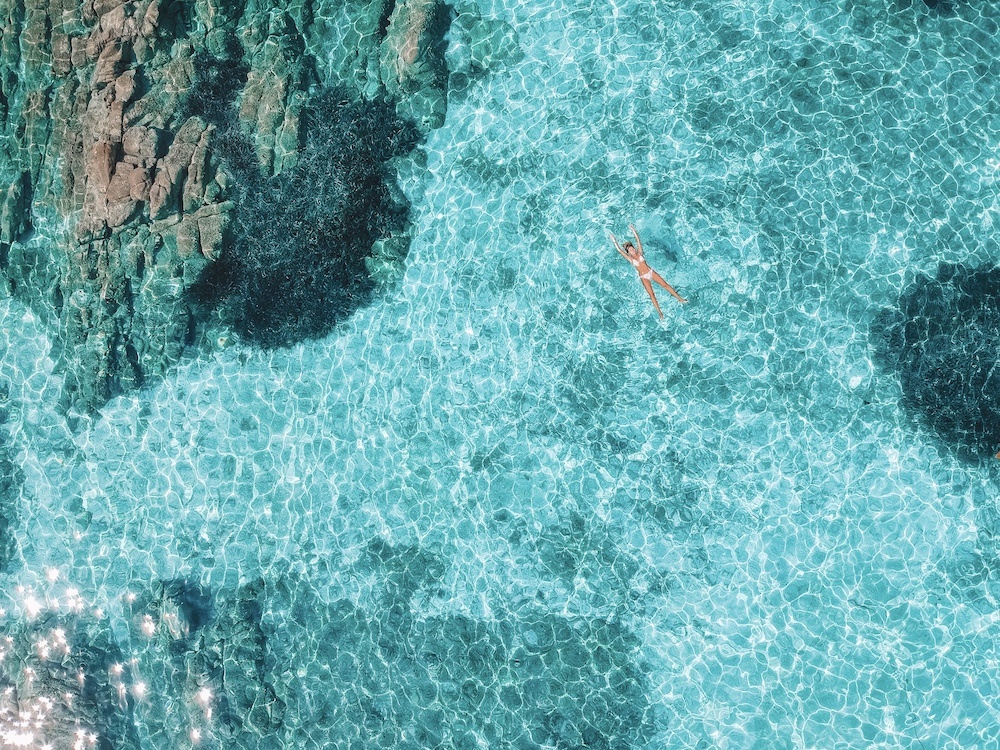 I personally travel with the DJI Spark. For me it was essential to have a drone that would easily fit in my backpack and not add too much weight to it.

I often take it with me when I’m hiking or out and about all day and didn’t want to be carrying something bulky and heavy.

The battery life of the DJI Spark isn’t the best, but I always carry a spare battery with me so that I can use it more than once during the day.

I also avoid using it on very windy days since it’s so small and light that I’m scared it won’t be able to hold the wind and get swept away.

The DJI Spark doesn’t film in 4K but other than that it has a very good quality camera and can be used for cool cinematic footage or epic photos.

The only downsides of this drone are the short battery life and light structure that make it hard to use on windy days. Other than that for me it’s the perfect drone for travel.

See the latest prices and all the specs for the DJI Spark here! 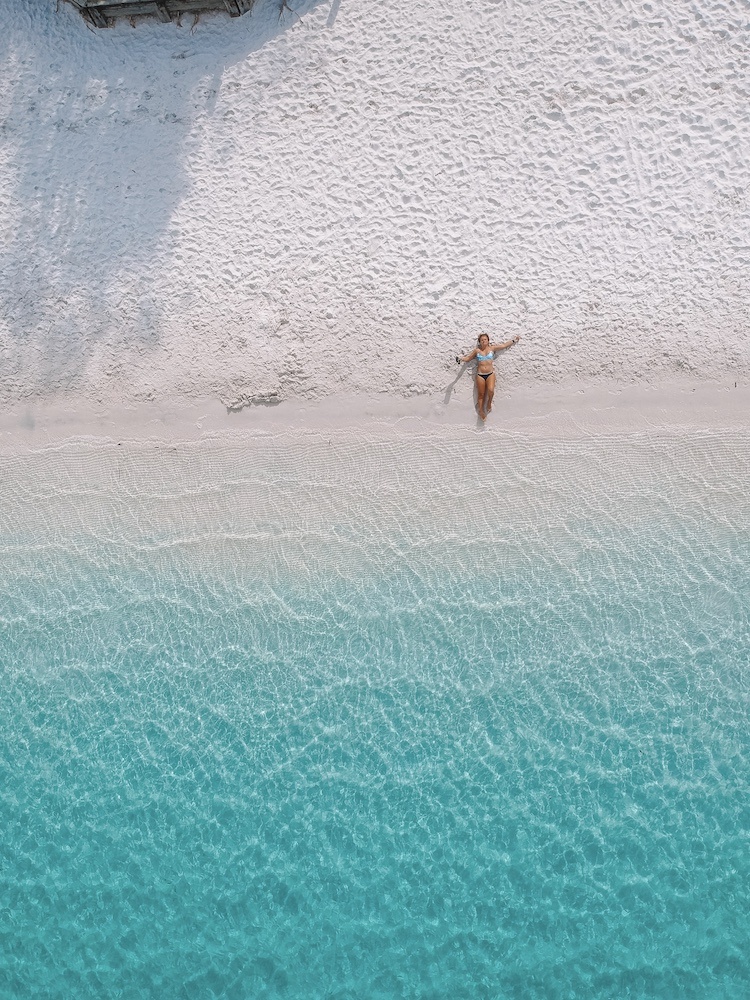 “The standard for a high-end but packable drone was set in 2016 when DJI released the original Mavic Pro. That drone packed full size features into a palm of your hand chassis and was instantly a hit amongst travellers!

Now, DJI has taken it a step further. The Mavic 2 expands on the already impressive specs of the original Mavic Pro.

Offering two versions of the flying camera, one with a zoom lens and one with a larger sensor (for better image/video quality) DJI is making you choose sides; but that’s not all that has changed!

New collision avoidance sensors bristle from all sides making sure you won’t be able to crash your new toy without really trying and longer flight times while flying more quietly are just a few of the amazing new additions.

As a previous Mavic Pro owner I did some hard math the justify putting the upgraded Mavic in my camera bag but I’m glad I jumped in feet first, the images are simply superb!” “The drone I use to capture photos for OutWithRyan.com and videos for my YouTube Channel is now the DJI Mavic 2 Zoom for the following reasons:

The Mavic 2 Zoom and Pro have higher image quality, stabilization, and longer flight times than almost any other consumer drone available today.

Since both are similar, the reason why I choose the Mavic 2 Zoom over the Mavic 2 Pro is for the ability to capture drone videos and photos more creatively.

With the Mavic 2 Zoom, you can film objects far away with the Zoom option!

If you plan to take or make travel videos with a drone, the DJI Mavic 2 Zoom is the best choice. “The drone we use for travelling is a DJI Mavic Air. We love it – it’s compact, folds into itself, light and ideal for travelling. It fits snugly into our backpacks.

In terms of quality, we’ve been super impressed. It has a 3-axis gimbal to stabilise the footage so what we take looks smooth, whether video or photo.

Flight time is 21 minutes which has been absolutely fine for our purposes so far. But we always carry a spare battery, which we strongly recommend.

This is probably the only downside, but given the cost (around $1,000), the high quality of images taken and compatibility, we’re very impressed.

To get around the battery issue you can purchase it as a “combo” which comes with a spare battery included.”

– by Stefan & Sebastien of Nomadic Boys

Click here to see all the specs and prices of the DJI Mavic Air! “I use the DJI Mavic Pro for two reasons. It’s small enough to fit nicely into a day pack or even a large coat pocket.

That’s important because, even if it is completely legal where you’re flying it, a drone is sure to attract attention – some of it negative. More importantly though, the Mavic Pro takes stunning photos and footage.

It’s light, easy to control, has several “modes” you can use to create amazing footage, and sensors keep it from hitting things in front of it or below it.

With the exception of it being quite low to the ground, which you can fix that by adding “feet” to it, I’ve seen little downside to using it.

– by Michael of The Round The World Guys

Click here to get your DJI Mavix Pro drone! 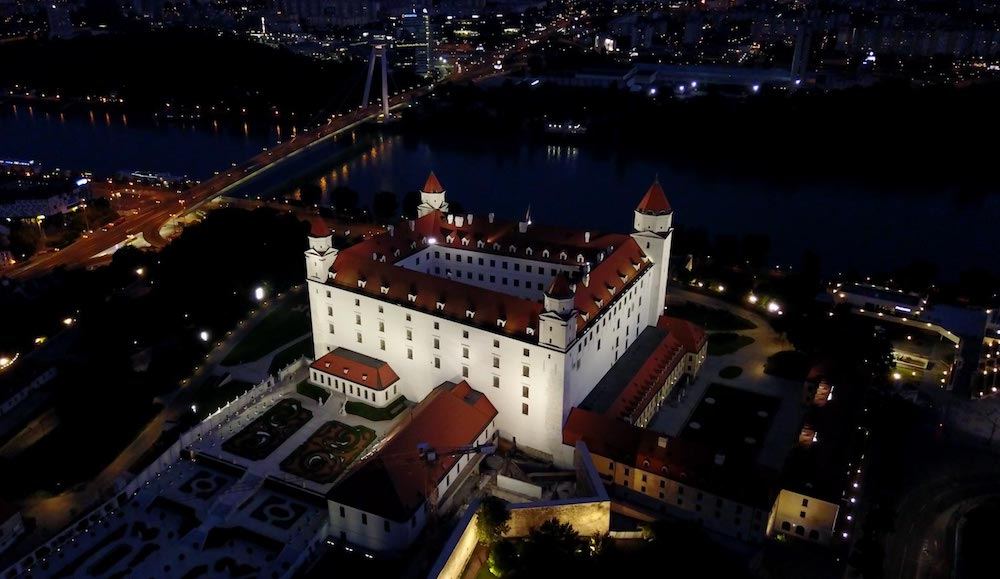 Taken with DJI Mavic Pro, photo by The Round The World Guys

“We purchased a Parrot Beebop drone and while we are very happy with the product and footage that it takes is excellent, I don’t think its the best drone for travel.

It is larger than others and it doesn’t fold down to a more compact size. The controller for it is large and bulking but it can also be controlled by an app on a smartphone or iPad which is really handy.

When generally always use the smartphone function for operating it especially when travelling. It is also not waterproof at all which means it can only be used during fair weather days.

However, the footage we have got from the drone is excellent as we have had ours a few years now so hopefully they are considering a model that folds up to a better size for travelling.”

– by Sally of Our 3 Kids Vs The World

Click here to see prices and specs of the Parrot Beebop drone! Park Hyatt Maldives Resort, taken with Parrot Beebop, photo by Our 3 Kids Vs The World

Do you travel with a drone? Which one is it and how do you find it? Let me know in the comments below!

I teamed up with other travellers to bring to you a comprehensive review of all the most popular travel drones, and some guidelines on the factors you should consider when purchasing your travel drone.

I hope you find this useful in helping you decide what drone to purchase for travel.

Enjoyed reading about the best drones for travel? Pin it! 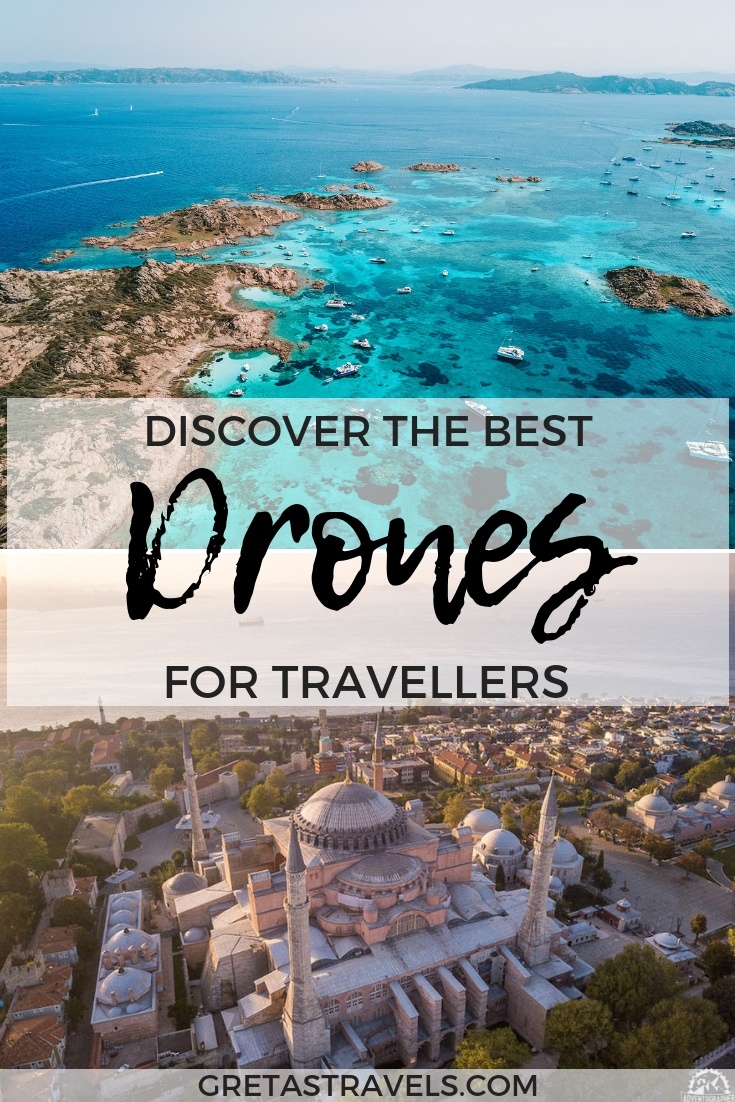 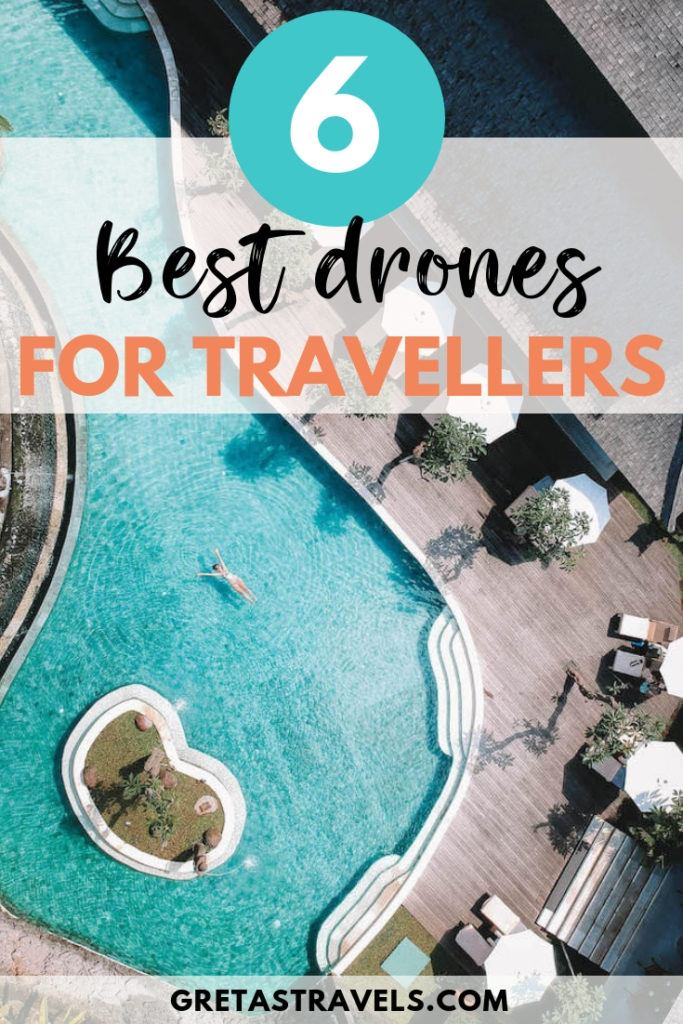 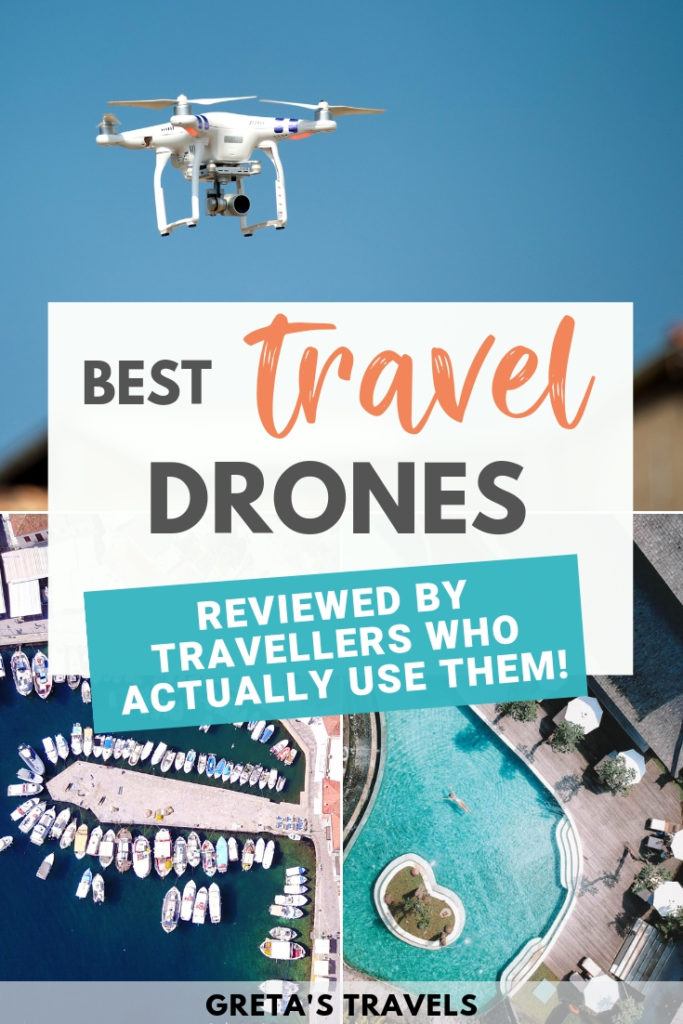 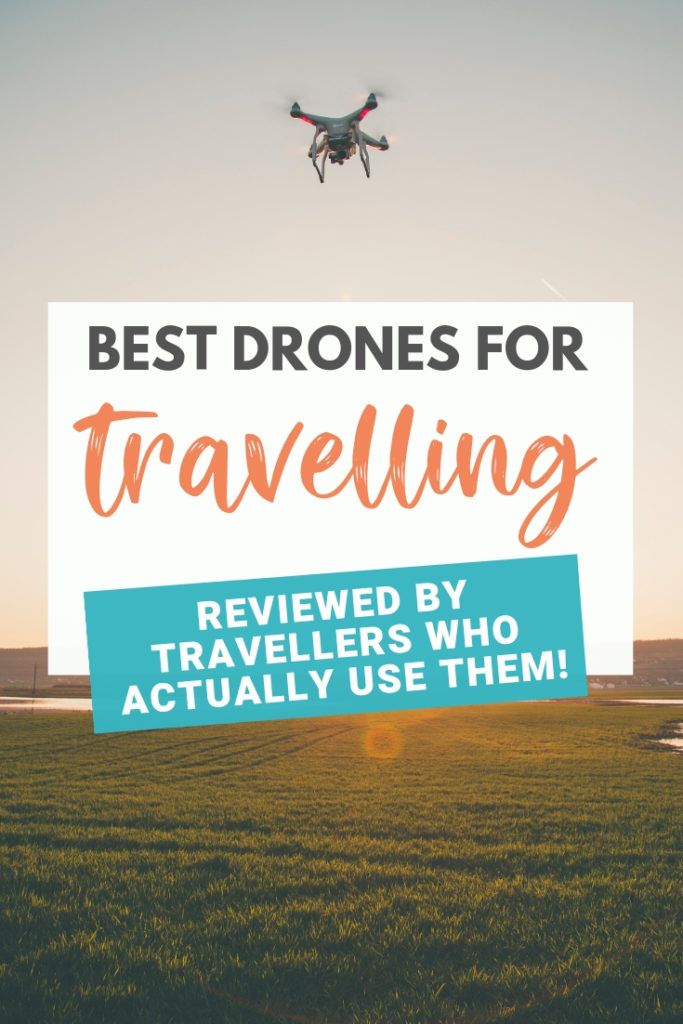 Interesting post, btw, I’ve been searching on the net for the best travel drones, and I’ve recently found a very helpful article about choosing a drone here: https://dronetechnews.net/best-drone-for-backpacking-and-hiking/

I felt like a free bird and I never looked back at life the same way. Gay travel changed my life!

10 Incredible Things To Do In Easter Island: The Essential Guide 🗿

[…] and if you are thinking of bringing a travel drone to make the most of this incredible scenery, you can forget it! Operating a drone on Easter Island […]

Nothing on the Anafi ? Can be charge by usb on the go, a lot quieter than all mavics, lighter 300gr, can look up at 180 degres. What do you think ?

Ciao Greta! I recently upgraded to a Mavic Air and SO excited to use it but I'm not sure yet how to use it like you had whilst in Sardinia...no controller in your arms! Any tips on how to achieve that kind of photo? Love that I found your blog-excited to read more.

Hi Talia, thanks for the comment, glad you like my blog! Do you mean the one floating in the water? That's my friend posing, I was actually on the beach flying it. I wouldn't risk it with the phone and remote in the water haha I think the only way to get that shot is to trust someone else to fly the drone