Being able to surf has always been a big dream of mine. Maybe the fact that there are no good surfing beaches in Italy made it even more of a dream, something that one day on the other side of the world I would be able to do.

I tried surfing in Bali, Costa Rica and Australia but for the first time in my life last week I attended a proper surf camp in Fuerteventura.

I teamed up with Planet Surf Camps to experience life in their surf house in Corralejo, in the Canary Islands, and learn how to surf.

If you’re looking for an awesome surf camp in Europe to learn how to surf, Fuerteventura is the perfect location.

Read on to find out everything you need to know about surfing in Fuerteventura and other cool things to do in Corralejo. 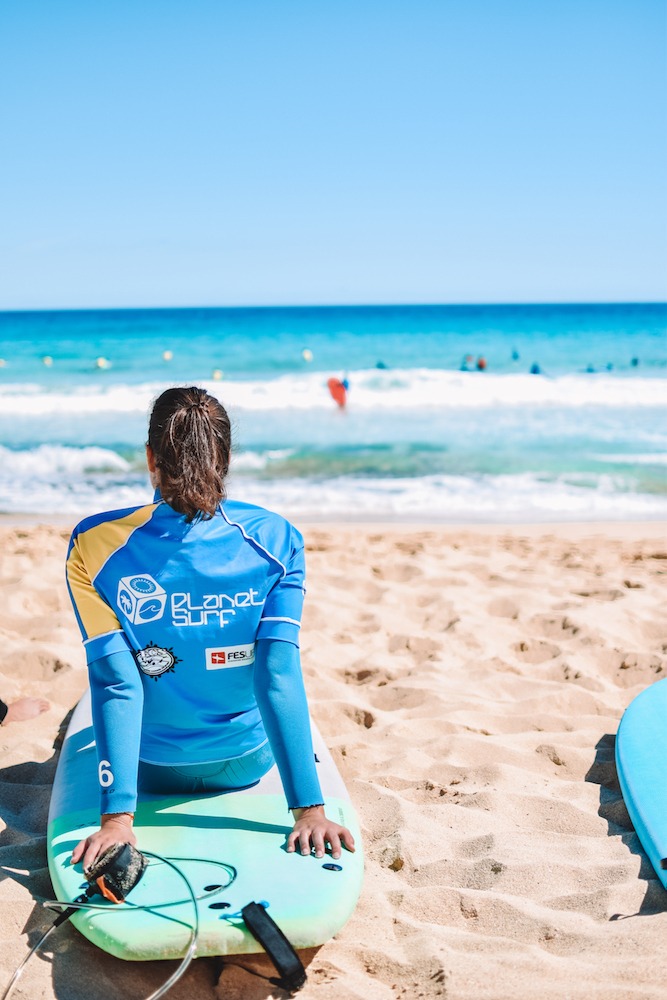 About Fuerteventura & the Canary Islands

Fuerteventura is the second largest island in the Canary Islands, a group of islands 100km off the north coast of Africa that are actually part of Spain.

Fuerteventura, like the other Canary Islands, is a popular tourist destination thanks to its beautiful beaches and nice weather year round. It’s considered a must-see on many Spain bucket lists.

The Canary Islands are actually a very popular European winter destination for those looking for beach and sunshine holidays.

We were there in October and were comfortable in a t-shirt and shorts all day, just make sure to pack a hoodie for the evenings or after surfing as it can get chilly when the wind picks up.

Fuerteventura is especially famous for water sports, such as surfing, wind surfing and kite surfing, thanks to the good wind and ocean conditions. 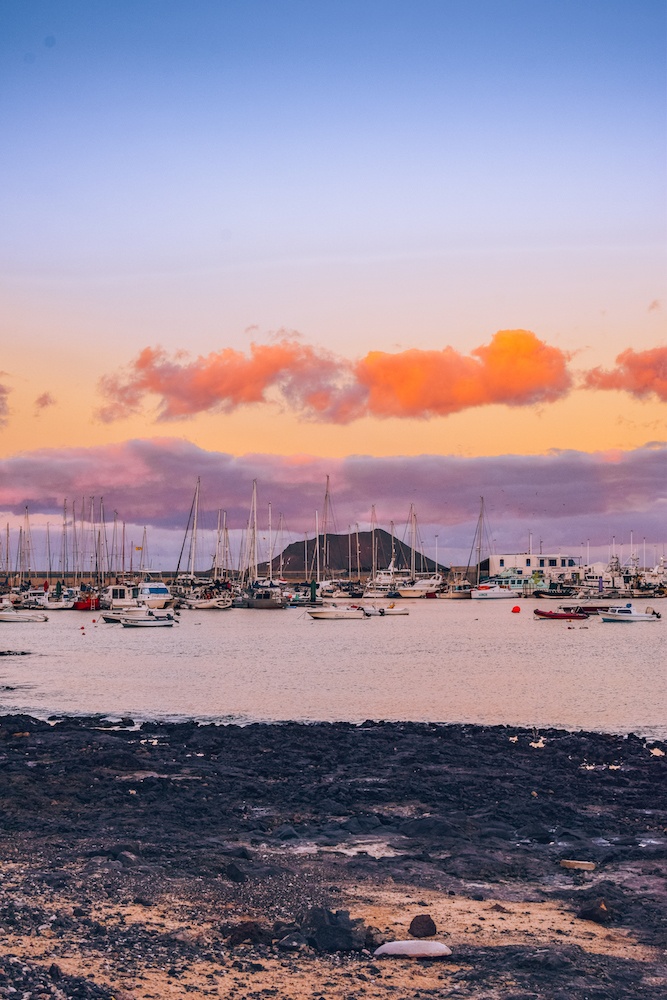 Sunset over the harbour of Corralejo, with Lobos Island in the distance

I had been previously been surfing in Tenerife, but only for a one off class, so we did the beginner surf classes with Planet Surf Camps.

We did around 3 hours of surf classes every day for five days, and had access to renting boards at the surf house if we wanted to do additional practice alone (although if you’re a complete beginner like us, you’ll find 3 hours a day is more than enough). 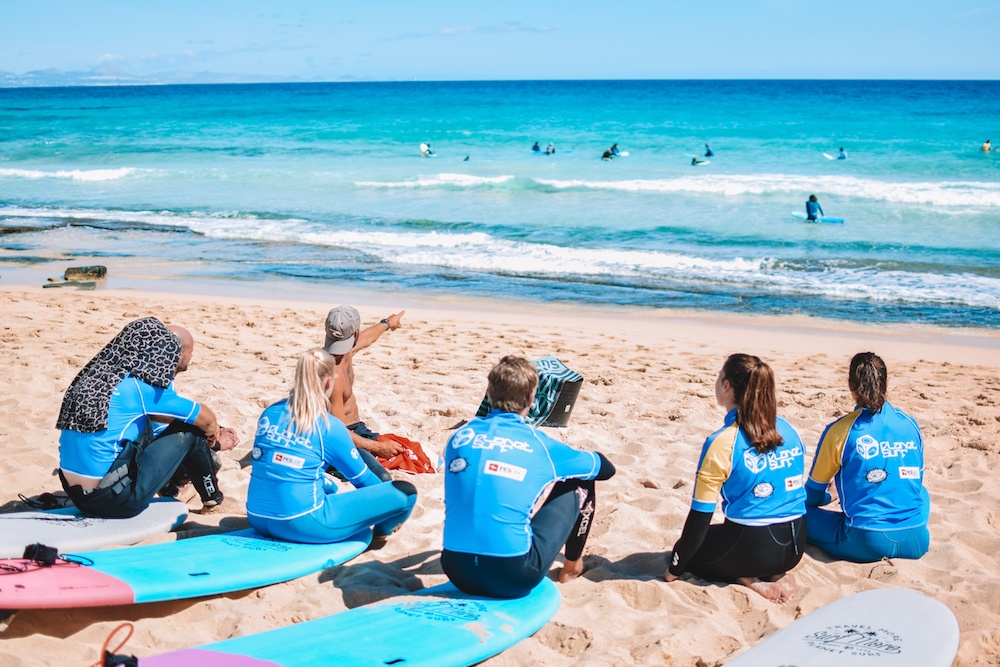 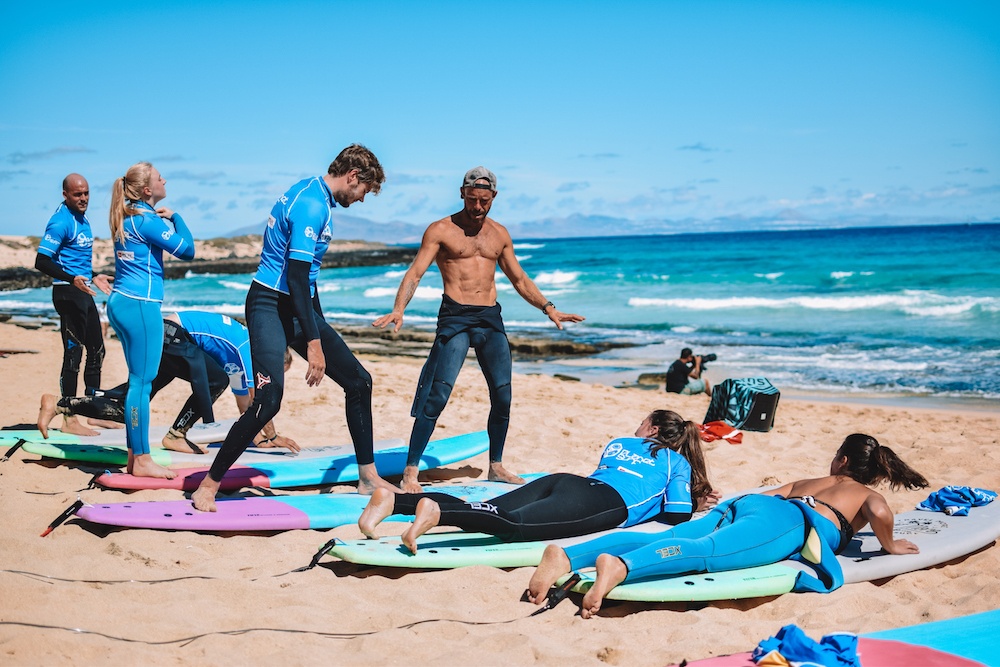 All our classes were in groups of 8 or less, which is great since our instructor (Nuno, really great guy!) was able to follow each of us individually and help us out in the water.

The time of the classes changed every day depending on the tides and waves of the specific day, which made it a bit hard to plan what other things to do around Corralejo, but it’s obviously better to be surfing in good conditions than at a specific time each day.

You’ll find out the time of your class from a blackboard in the surf house kitchen the previous evening. 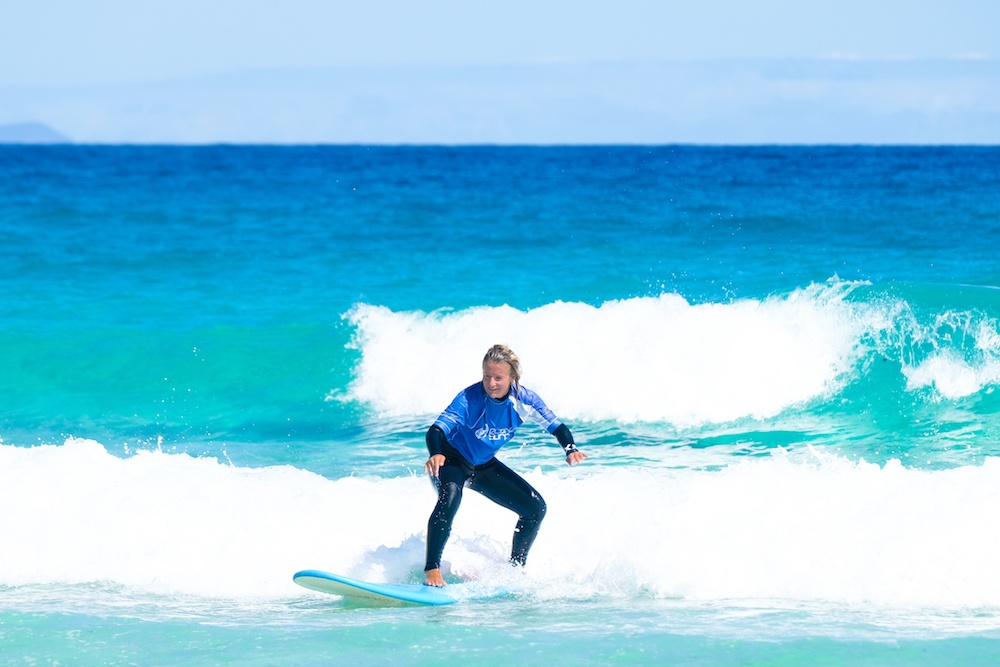 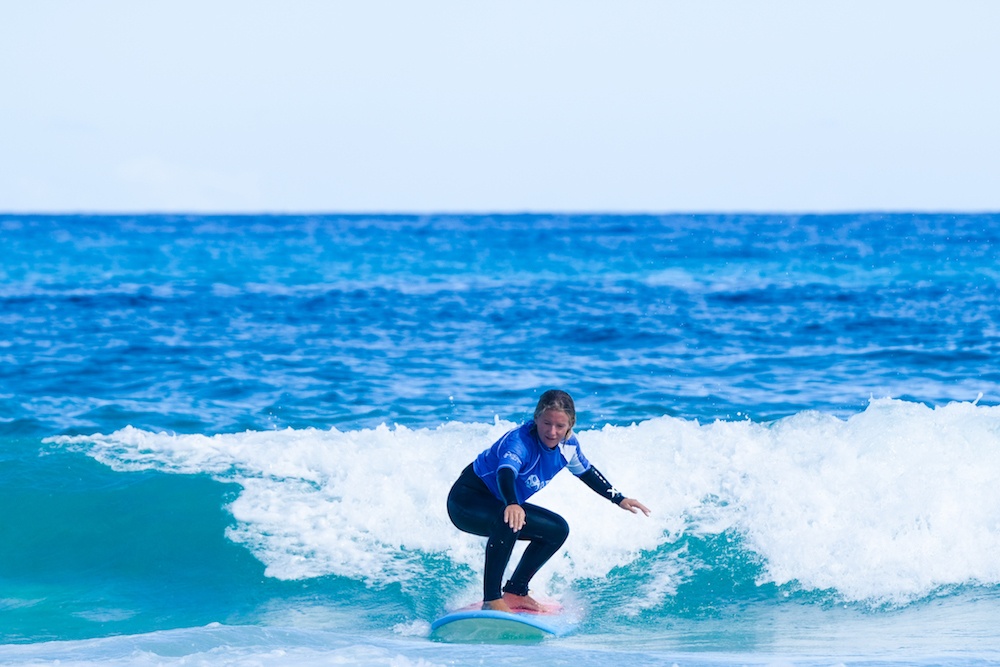 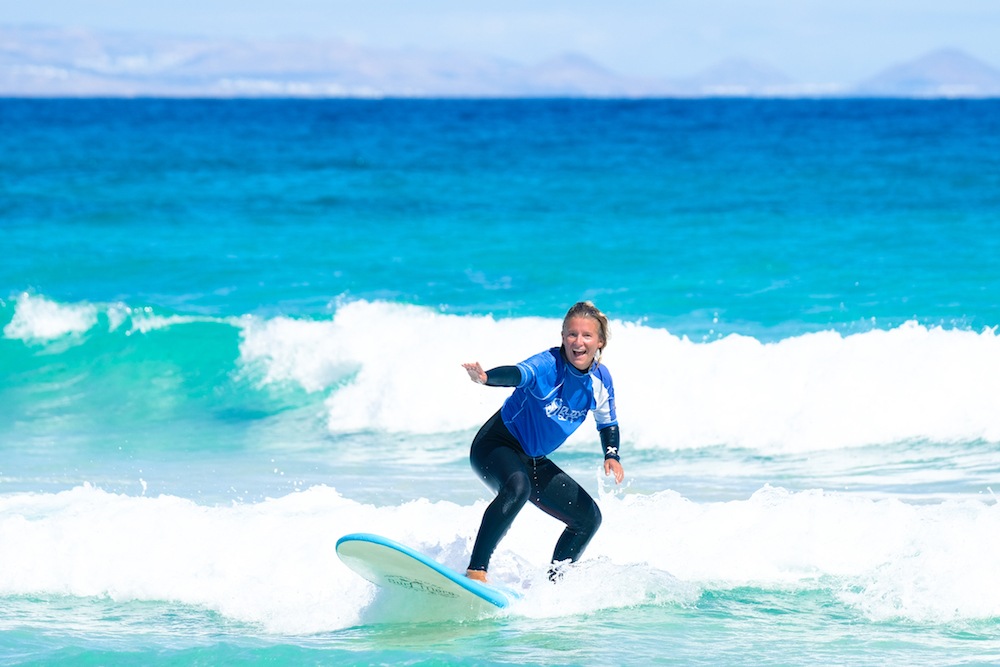 We surfed every day at Playa del Moro, but know that other groups were taken to other surfing spots like Rocky Point (which you can reach on foot from the surf house) and other beaches around the island.

Our instructor Nuno was very knowledgeable and good at explaining the basics to us.

After driving to the beach together from the surf house we did some warm ups and practice on sand, before all jumping into the sea and attempting to catch some waves.

Nuno helped us out and always had a good spot for us to practice with good waves.

Overall there are pretty good surfing conditions in Fuerteventura for beginners, and Planet Surf Camps are great at teaching and making sure you go to the right beaches and catch the right waves.

The atmosphere at the Planet Surf house is also great, relaxed and friendly we always felt welcome hanging out in the communal areas. 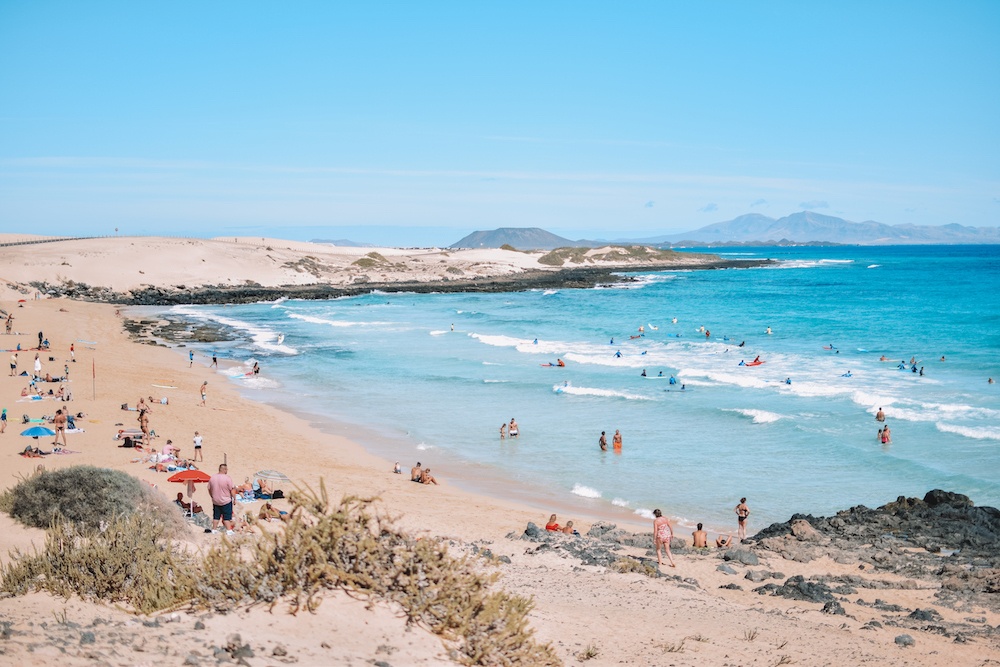 Playa del Moro in Fuerteventura, where we did our surf classes 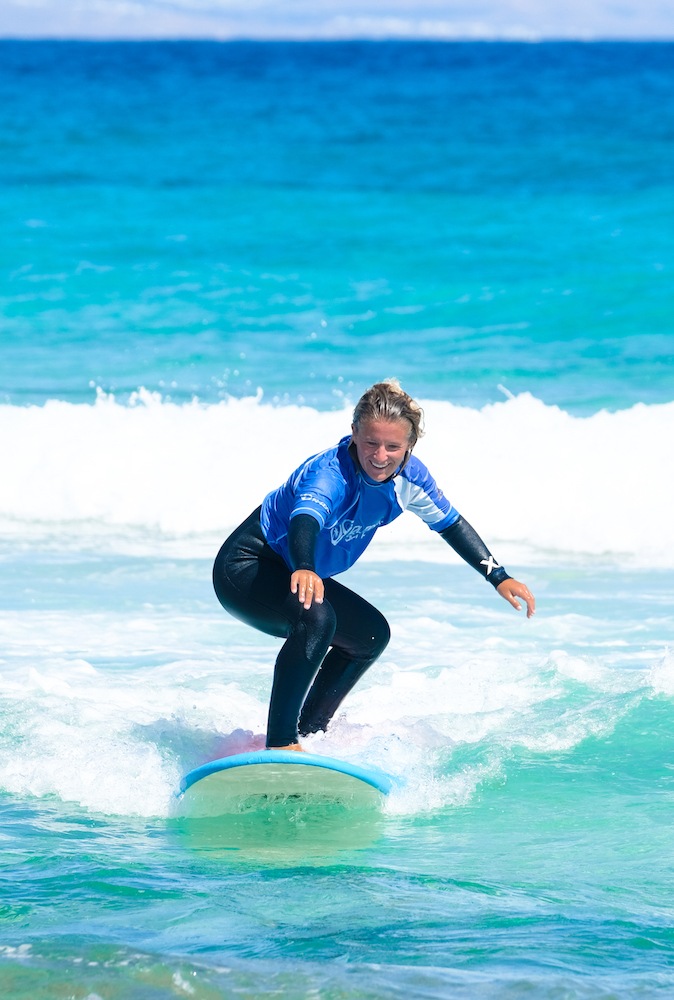 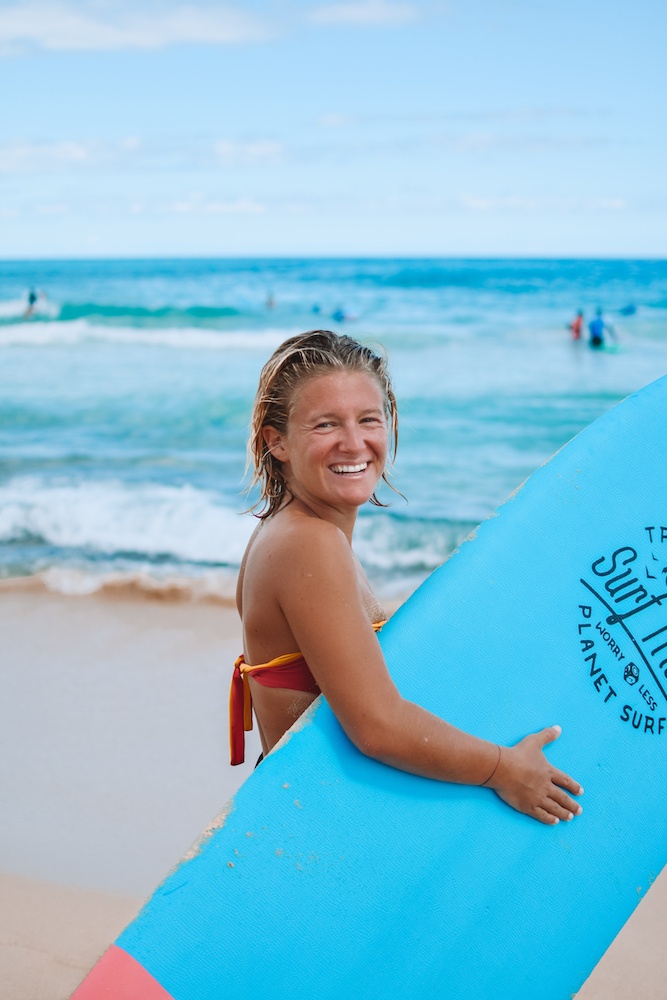 Learning to surf in Fuerteventura

Other cool things to do in Corralejo, Fuerteventura

Surfing is one of the main attractions in Corralejo, however once you’ve done three hours of surfing in the morning I can understand you might want to do something not water based in the afternoon.

There are tons of fun things you can do both in Corralejo and around Fuerteventura; the following are some of my favourites.

Corralejo Natural Park covers 24km squared of sand dunes, volcanic rocks and pristine beaches. It’s a wild and beautiful area that you can explore on foot, cycling or driving.

We rented bikes from the Planet Surf house and cycled to the sand dunes. As we later found out cycling on sand is rather complicated so we just left our bikes by the side of the road and ventured on the dunes on foot.

This vast desert is very different from anything I had seen before, and we had lots of fun just wandering around and getting lost around the sand dunes.

Just make sure you remember where you left your bikes or car, the sand dunes all look very similar and you don’t want to lose them! 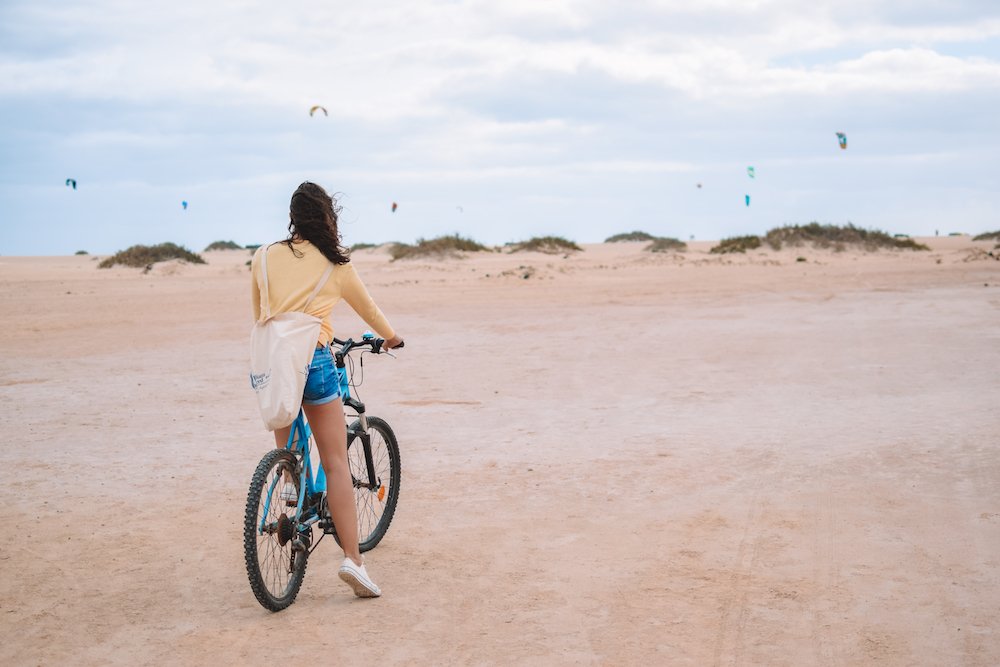 Cycling around the sand dunes of Corralejo Natural Park, Fuerteventura 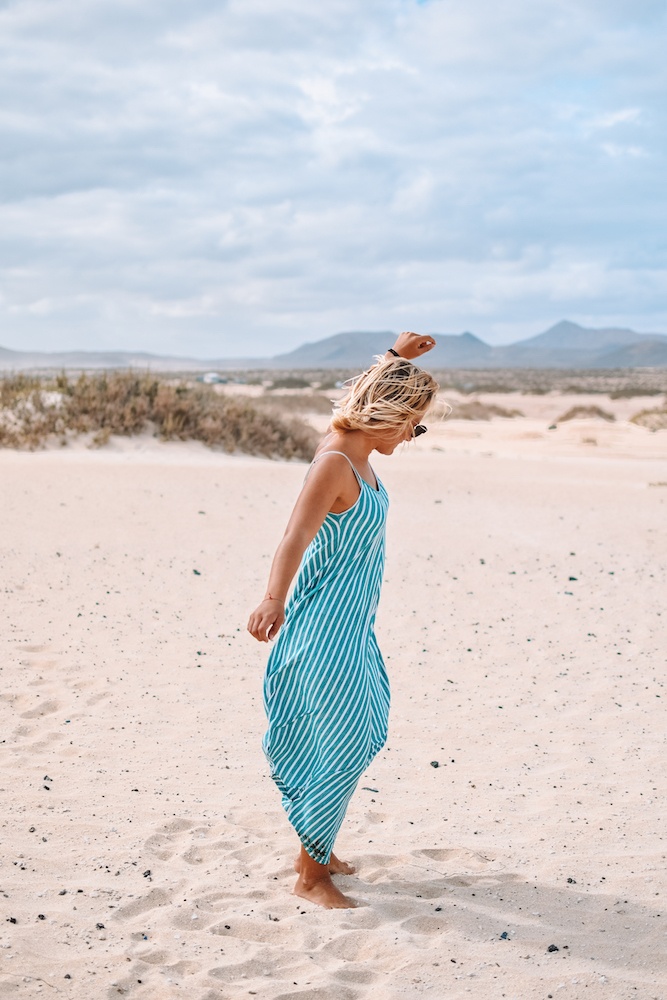 Dancing around the sand dunes of Corralejo Natural Park, Fuerteventura

Do a day trip to Lobos Island

A short 15-minute boat trip from the main harbour of Corralejo is the island of Lobos. Lobos is a volcanic island comprised mostly of a largely uninhabited nature preserve that’s home to rare birds.

There are a two options for visiting Lobos Island; you can either get a water taxi and then explore the island alone or do an organised day trip.

You can book both directly in Corralejo; there are a huts all along the harbour and shops on the main street of Corralejo where you can book the day trip to Lobos and a number of other excursions around Fuerteventura.

We personally decided to take a water taxi and explore Lobos alone, since with 3 hours a day of surfing we never had a full day to do the organised day trip, plus we felt we already spent enough time in the water and didn’t want to do snorkelling which most of the tours included. 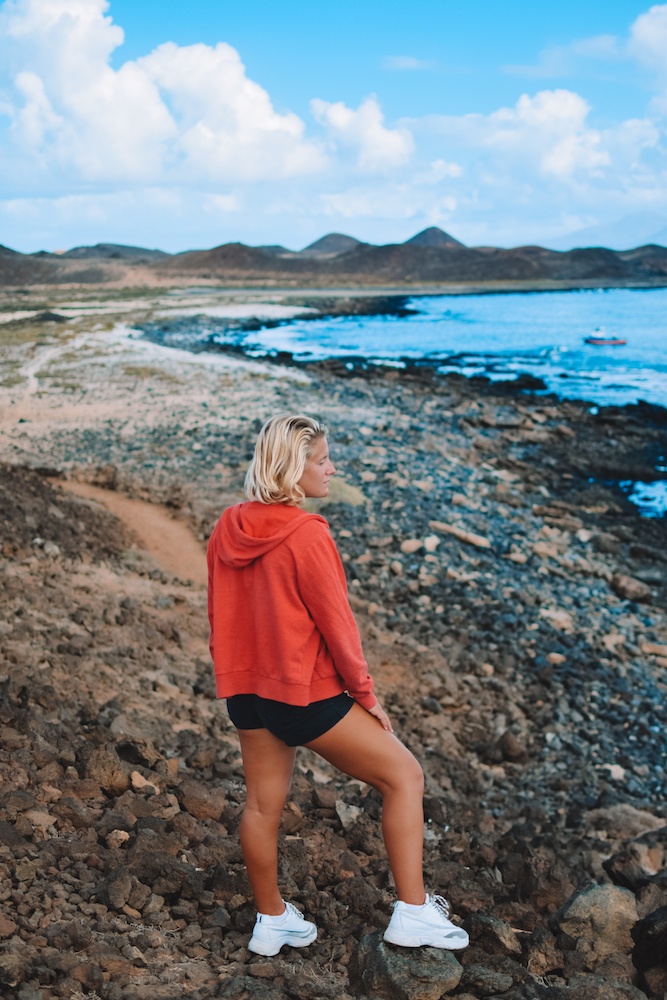 If you get a water taxi they will drop you off at a small harbour where they will also pick you up later in the day.

They will either have a pick up and drop off schedule (eg. every half hour) or you can arrange directly with the captain the pick up time.

There are clear paths that you can walk along on the island and signs that point you to all the main attractions on the island, with timings of how long it should take to get there.

We found these very helpful as it helped us decide how realistic or not it was to see something before our water taxi pick up. On Lobos there is also a small volcano that you can hike up.

We gave it a miss as we didn’t have enough time and didn’t feel like the view was going to be considerably different from the other smaller hills.

There isn’t much on Lobos Island but we found the desert island to have an almost eerie beauty to it, walking around alone with just the sound of waves and birds in the distance was a great way to disconnect from real life. 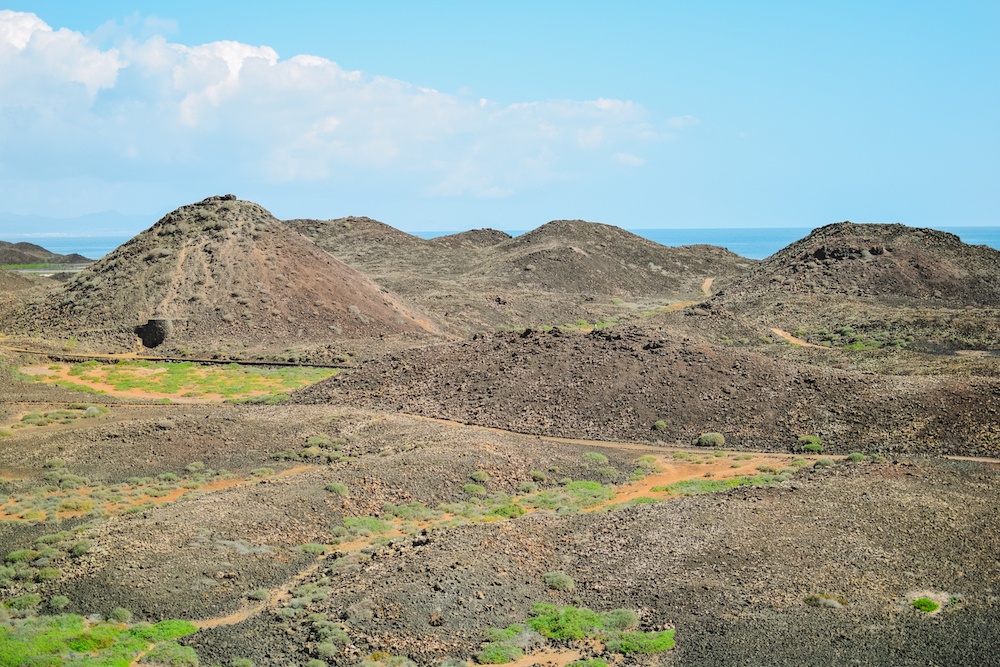 Walk along the harbour of Corralejo

The town of Corralejo has one main shopping street surrounded by smaller streets dotted with bars and restaurants.

The main street is perfect for some souvenir shopping on a cloudy day when you might not be hitting the beach.

All along the harbour you will also find cute bars and restaurants where you can sit outside to enjoy food and drinks with a sea view. 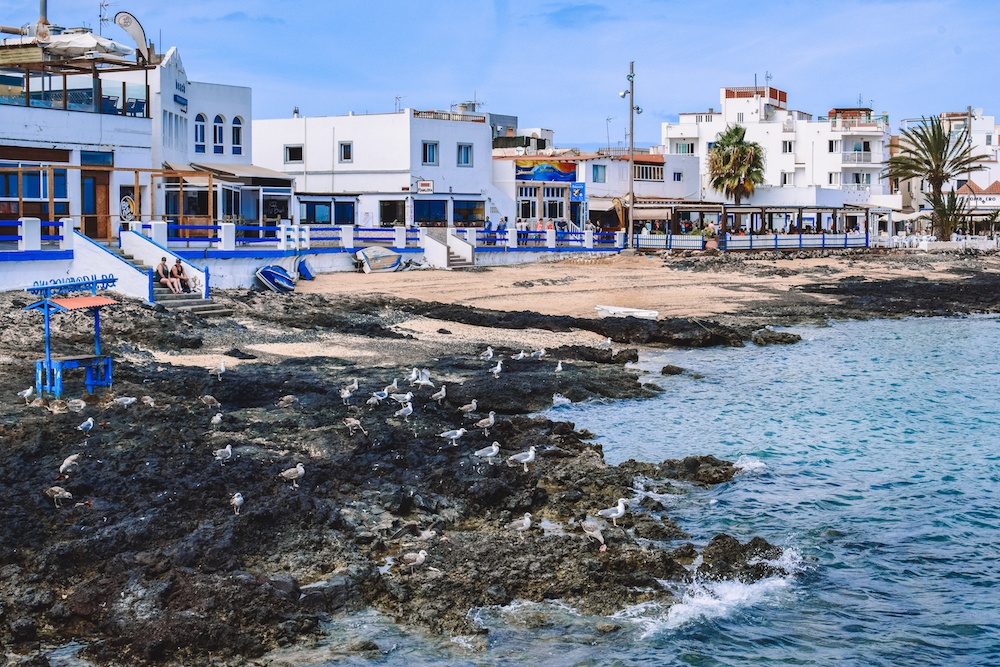 Cute white houses along the harbour of Corralejo, Fuerteventura 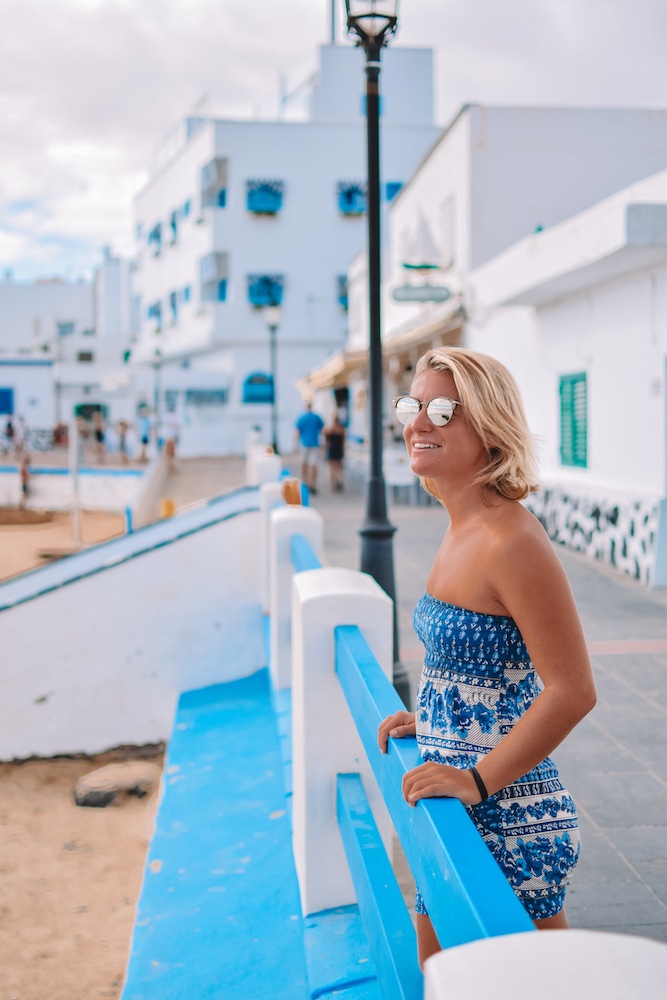 Wandering around the harbour of Corralejo, Fuerteventura

Quad biking on the sand dunes

We didn’t actually do this activity, but saw signs and shops everywhere in Corralejo offering it as an excursion.

Given our failed attempt at cycling on the sand dunes if you want to spend more on the dunes or see more of Corralejo Natural Park you might consider a quad bike instead. You can both rent one and go alone or book a tour. 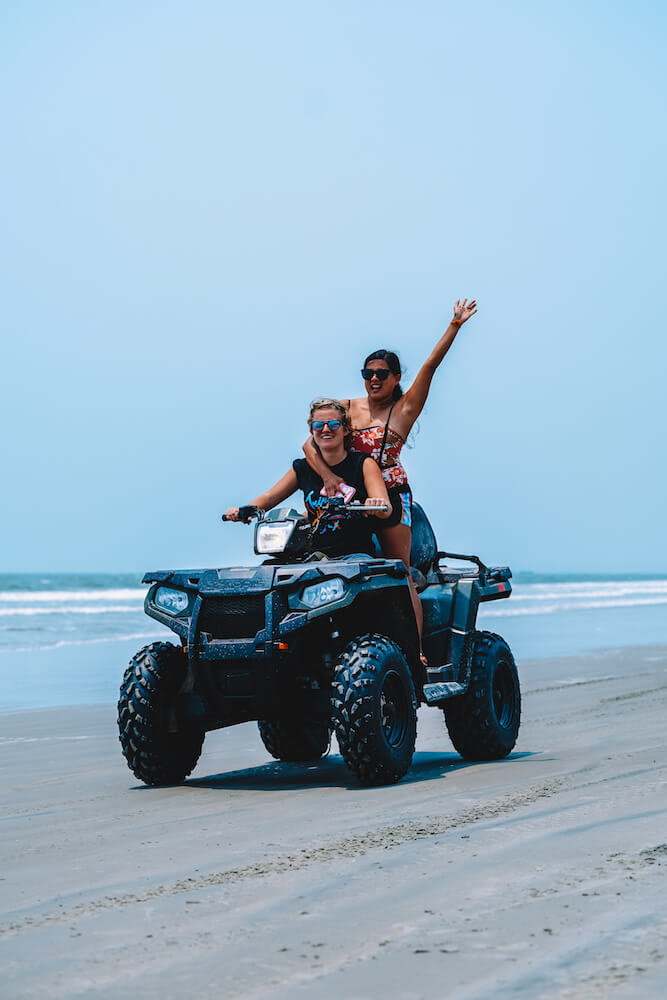 Me and Karla from @karlaroundtheworld quad biking in Kannur. Photo by Jinson Abraham @jinsabraham @keralatourism

Do a day trip to Lanzarote

We didn’t have the opportunity to do this either as it required a full day and we always had a half day of surfing scheduled.

However Lanzarote is a less than an hour ferry away, and easy to visit for a day. We saw in town shops offering both organised all-day excursions or just ferry tickets so that you can go alone and do your own thing. 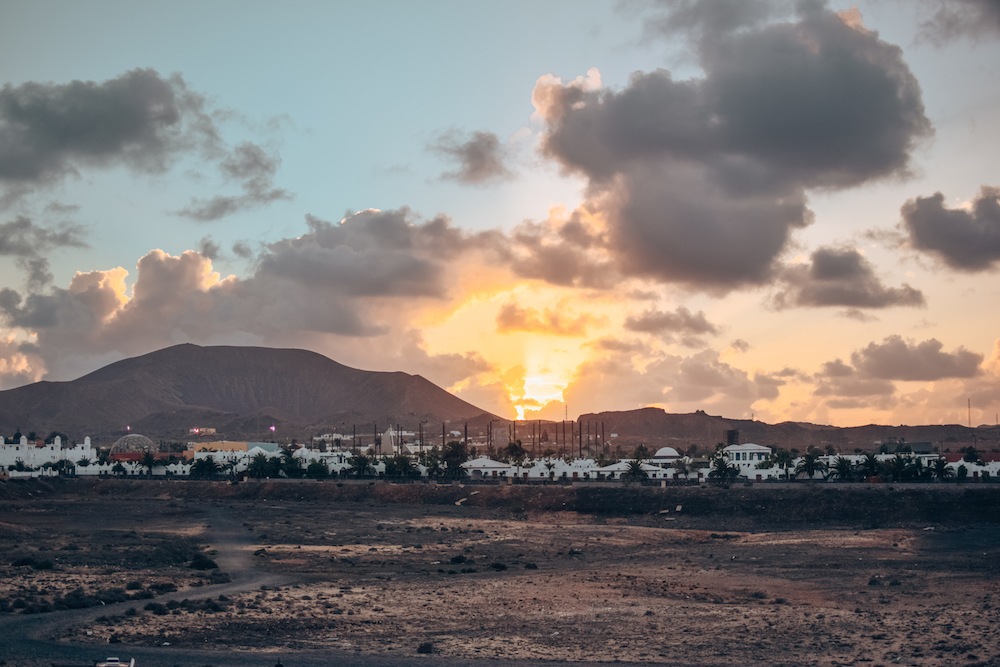 Final thoughts on learning to surf in Fuerteventura

Have you ever been surfing in Fuerteventura? How did you find it? Let me know in the comments below!

I had been to Tenerife and Gran Canaria before, two of the other islands in the Canary Islands group, but it was my first time in Fuerteventura.

I personally found it more appealing than both the other islands; even if Corralejo town is smaller I found it had a much more relaxed and pleasant vibe.

I loved it so much I’m considering spending autumn and winter there next year.

The perfect surfing conditions are an added plus. I hope I’ve convinced you to do a surf camp or visit Fuerteventura this winter, and that you’ll find this post useful in planning your trip!

Looking for more Spain travel tips? Check out these guides:

Enjoyed reading about doing a surf camp in Fuerteventura? Pin it! 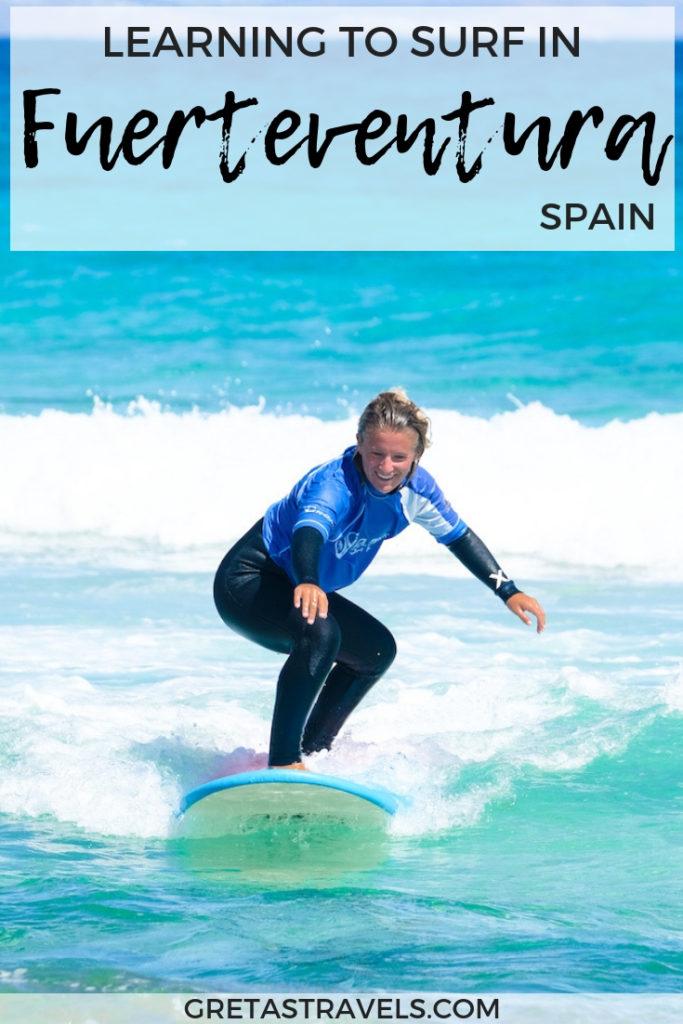 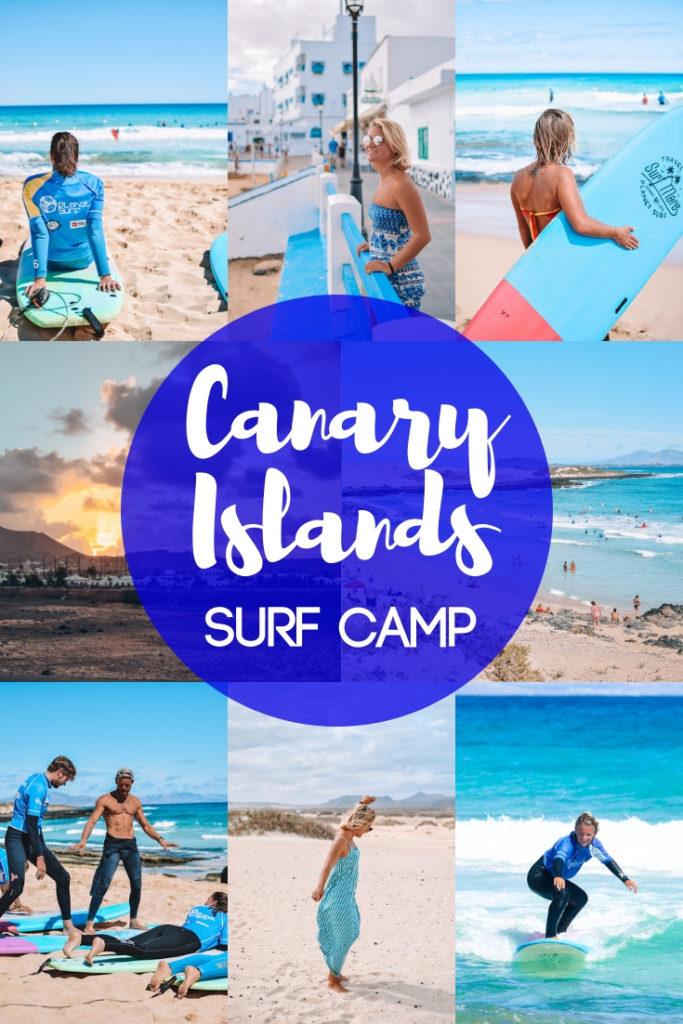 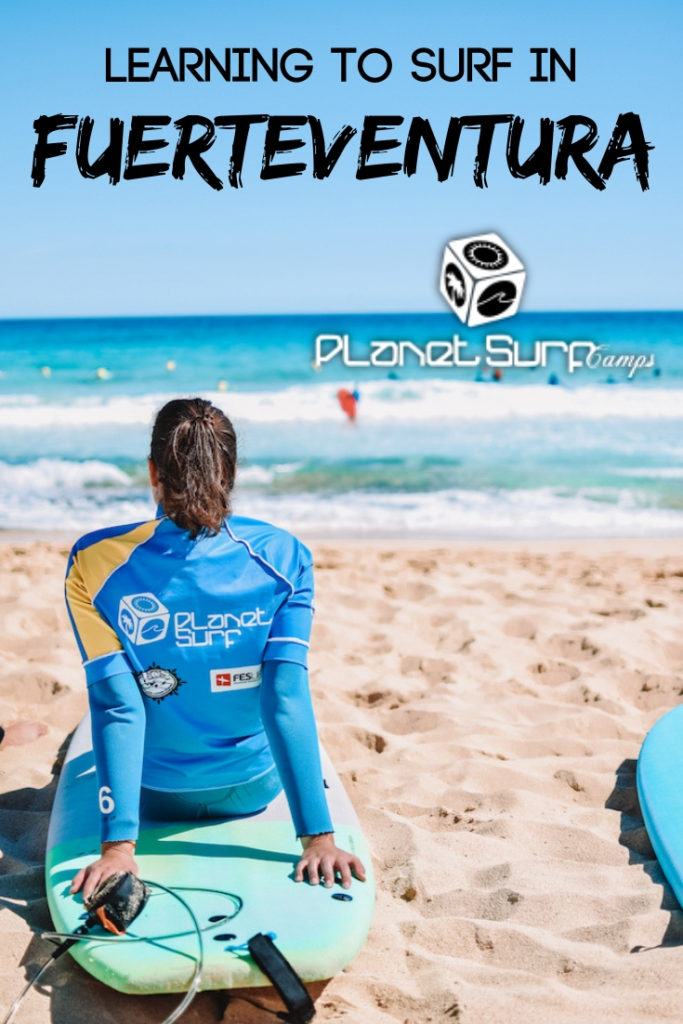 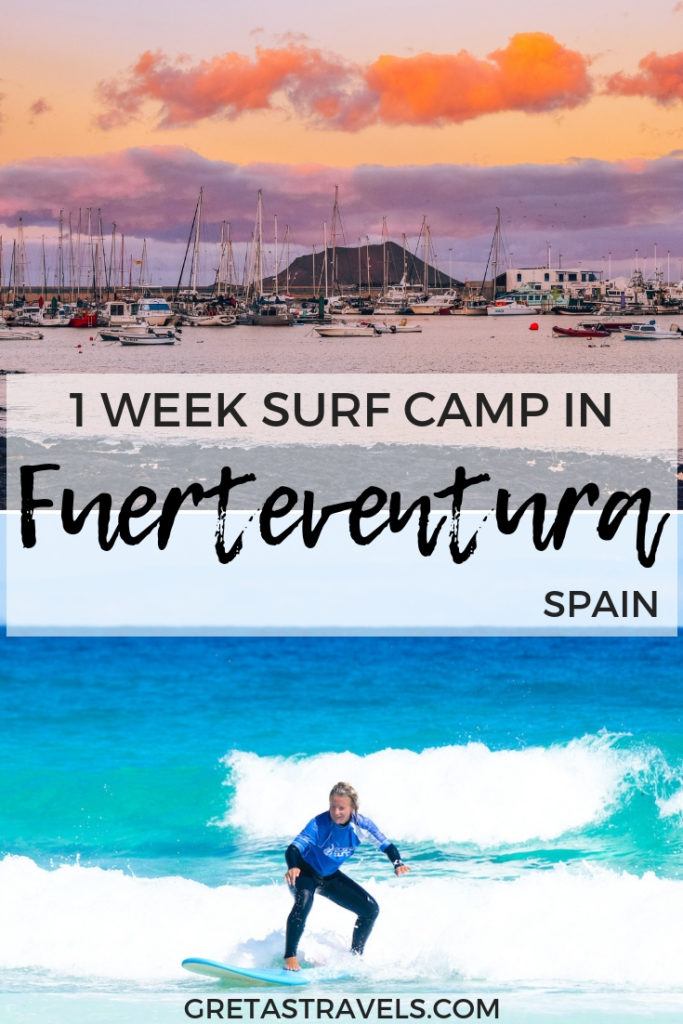 Disclaimer: This post was created in collaboration with Planet Surf Camps. All thoughts and opinions are my own.

[…] had been to Fuerteventura before, but the green landscapes of Tenerife took me completely by surprise. The drive to Benijo is […]

[…] you’re looking for the best things to do in Spain in winter, you should add surfing in the Canary Islands to your list. It’s not a typical winter activity, which is what makes it so […]

22 Holiday Destinations Spain Has Waiting For You - Robe trotting

[…] Corralejo in Fuerteventura, in the Canary Islands, is one of my absolute favorite places in Spain. Corralejo is a small town in the north of the island, with a lovely harbor, cute white houses, beautiful surfing beaches and sand dunes all around it.  […]

Hi Greta, I really like your post. You did fantastic adventures in Fuerteventura thanks for sharing your experiences and you inspired me a lot to do such beach adventures.

[…] Greta’s post on where to go surfing in Fuerteventura […]