Map Of The Golden Circle, Iceland: 4 Places You Must-See

Last updated on Oct 23, 2019 It's pretty likely that this article contains affiliate links. If you click on them I might receive a small commission, at no extra cost to you.

Iceland is known as the Land of Ice and Fire, and for good reason. I recently spent a week in Iceland with the Italian travel agent Giver Viaggi e Crociere. This post is all about the best things to do and places you have to visit along Iceland’s famous Golden Circle. This is one of the most touristy and visited parts of Iceland, but also one of the most impressive. When you see the waterfalls and geysers of the Golden Circle it’s easy to see why they call it the Land of Ice and Fire. You can easily drive around the Golden Circle in one day and have plenty of time to see all the main attractions. I included a map and 1-day itinerary to show you everything you need to know about visiting the Golden Circle in Iceland. 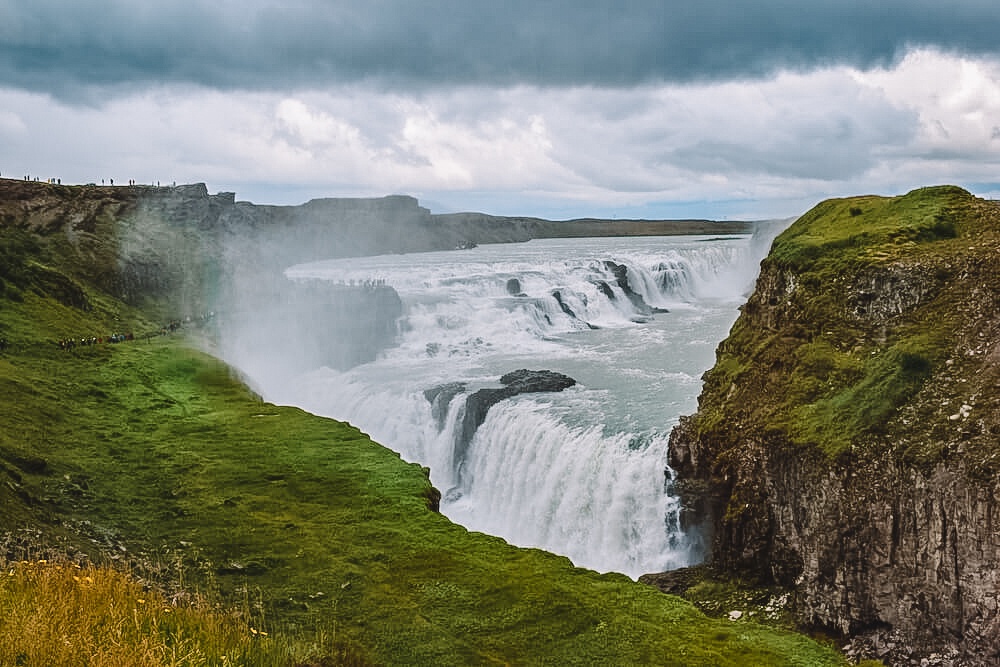 Gullfoss waterfall, one of the main attractions in the Golden Circle, Iceland

Map of the Golden Circle, Iceland 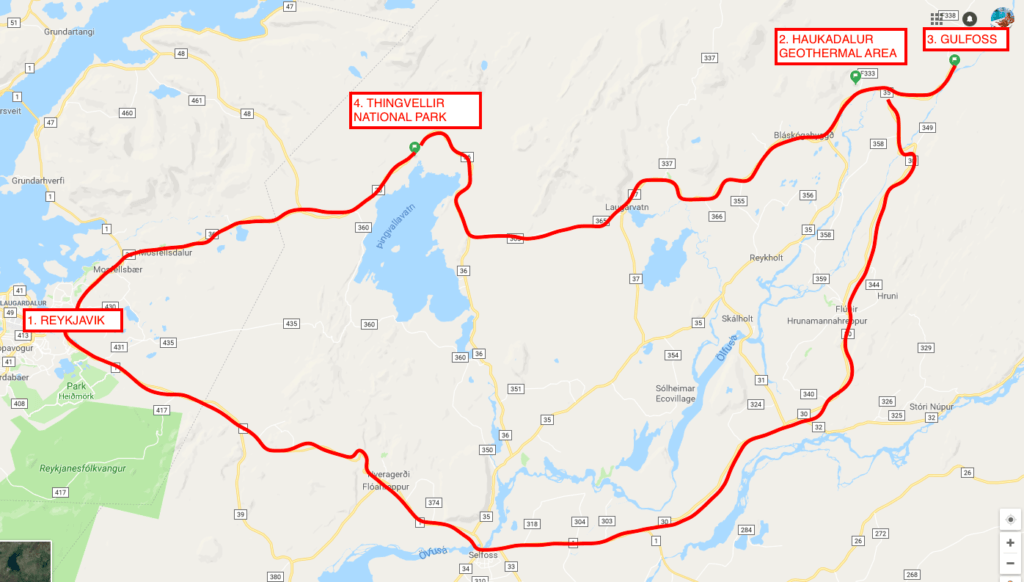 Map of the driving route we followed in the Golden Circle, Iceland

What to see in the Golden Circle

Since I was visiting Iceland on an organised trip I didn’t have to worry about driving or booking a tour. You can visit the Golden Circle on an organised day trip from Reykjavik, or rent a car and do it yourself. Below you can see the map with the best route to follow on your one day Golden Circle tour.

We started the first day of our trip by setting off from Reykyavik, and heading to the Haukadalur geothermal area. During the drive there you can admire some beautiful landscapes, and you will see smoke coming out from the ground. These are due to the geothermal activity below the ground, which result in the smoke being released above ground that we can see. The climate in Iceland is already variable enough, but especially when you get close to the geysers, which release hot smoke. If you need help packing for Iceland, check out my packing list and advice here. There are two main geysers in the Haukadalur geothermal area; Geysir and Strokkur. 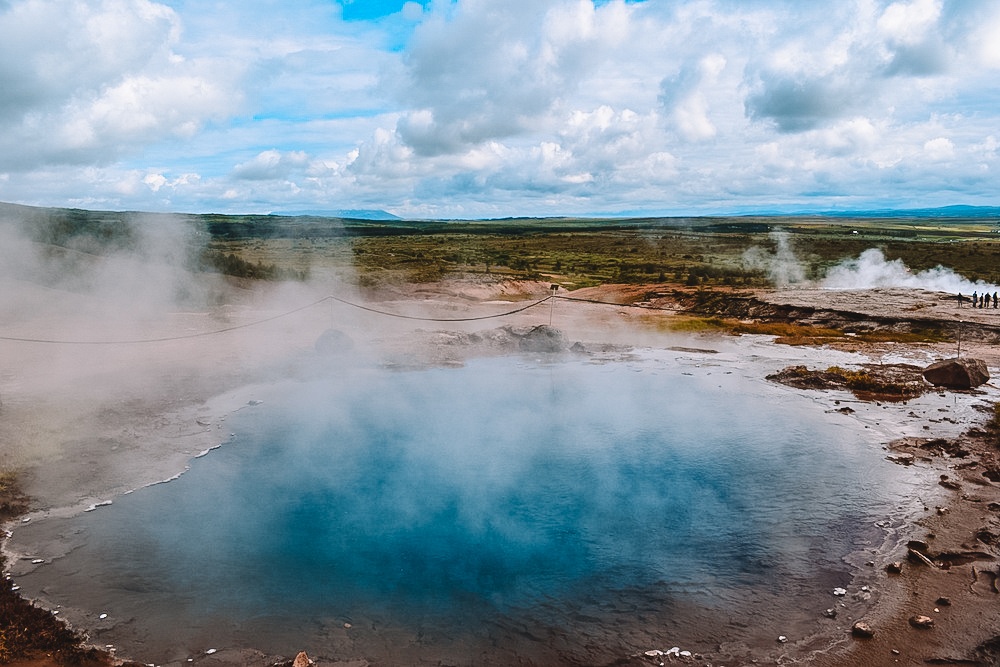 The Great Geysir, now dormant, in the Golden Circle, Iceland

Geysir used to be known as The Great Geysir, however it has been dormant for many years now, due to rocks being accumulated over it over the years. Scientists believe that it will start erupting again after the next big seismic activity, since an earthquake has the potential to remove the clog over it and revive it. Strokkur instead erupts quite regularly every 5-10 minutes. There is no way to exactly predict when it will erupt, so you will often find crowds gathered around Strokkur, behind the safety lines waiting with their cameras out, in the hope to capture the burst of water when it comes. I had my camera on a tripod and filming for 12 minutes waiting for that moment, and when I finally turned it off as my group was going to leave without me, it did a huge burst. Goes to show you can’t control or predict nature. This was one of the busiest stops in our tour of the Golden Circle, however not in a way that bothered me like crowds normally do. Geysers are also very different from anything I’m used to, so I was very excited to see them, regardless of it being a touristy spot. 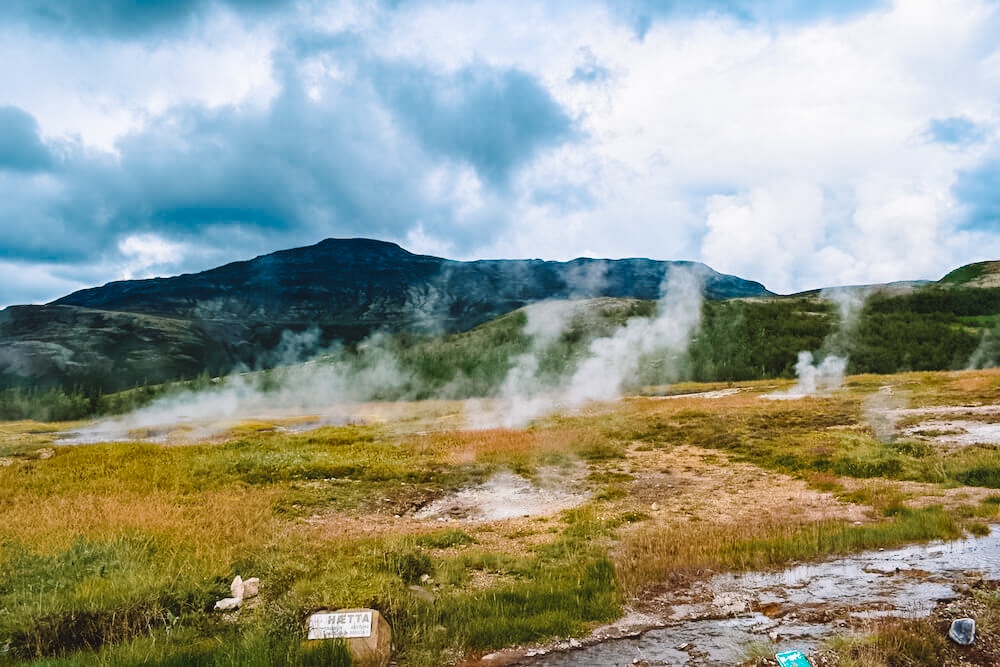 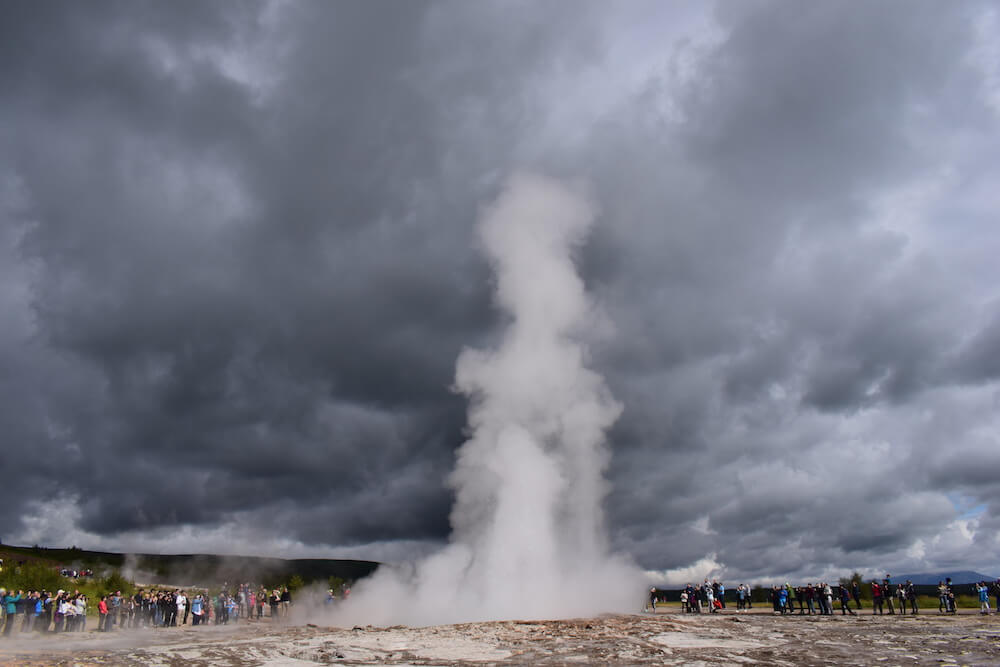 Strokkur geyser just after erupting (I wasn’t quite fast enough to catch it in photo, but I did get it on video!)

The second stop of the day was Gullfoss. This is a huge waterfall on three layers, also known as the “Golden Falls”, located in a gorge of the Hvìtà River. As you approach by car it’s hard to miss, thanks to the big and busy parking lot, since this is considered a must see stop on pretty much every tour. After you park there is a wooden path that leads you to a viewing platform over the waterfall, and a number of smaller paths that can lead you either upriver of the waterfall or under right next to it. The paths from above give you the best view over the waterfall, and the three separate layers over which it falls from. However the path right next to it is the most impressive, as you can get really close to the river, and really feel the power of nature as the water rushes past you. Check out the video to see the real power of this huge waterfall! 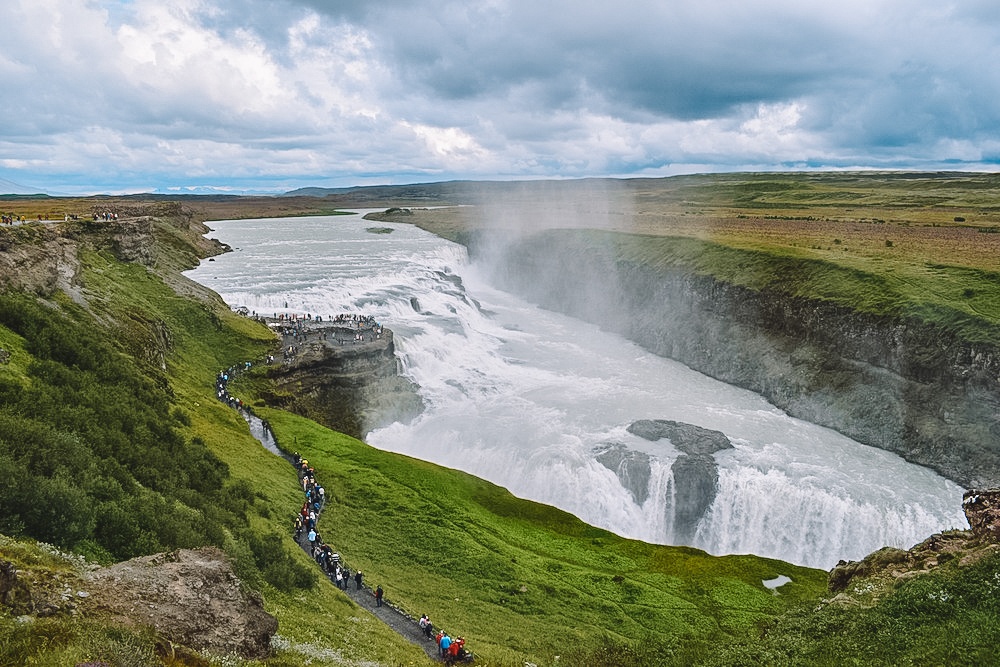 Gullfoss waterfall, one of the main attractions in the Golden Circle, Iceland 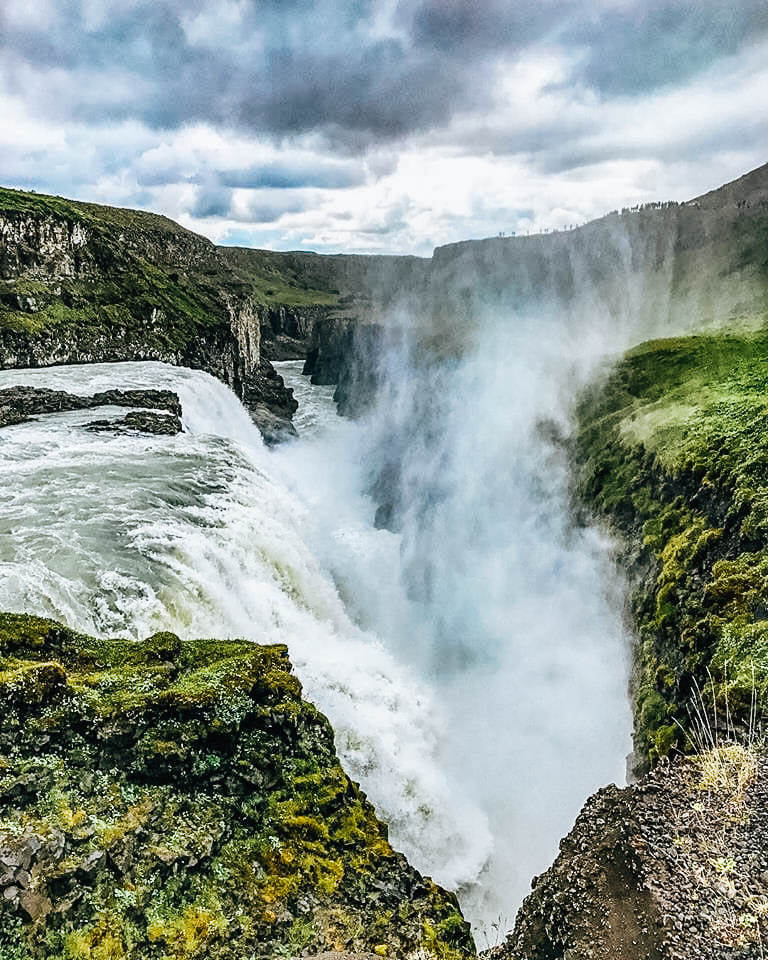 Despite not being an epic waterfall or geyser, the Thingvellir National Park was one of my favourite stops in the Golden Circle. It’s a huge area and historic site, that lies on the rift valley that marks the ridge between the Eurasian and North American tectonic plates. From 930AD to 1798, this was where the Icelandic parliament used to gather. I enjoyed visiting it because, even though there were a lot of people, it is a much bigger area than the geysers or Gullfoss, with people wandering around the paths and enjoying the views, so it doesn’t feel as crowded. There is also a cool geological formation, that looks like a one sided canyon. This was strategic for when they had parliament gatherings, since they could ensure that they had one side protected by attackers, and a slightly higher viewpoint over the surrounding countryside. Nowadays, it’s just a very cool park with paths that you can walk along. 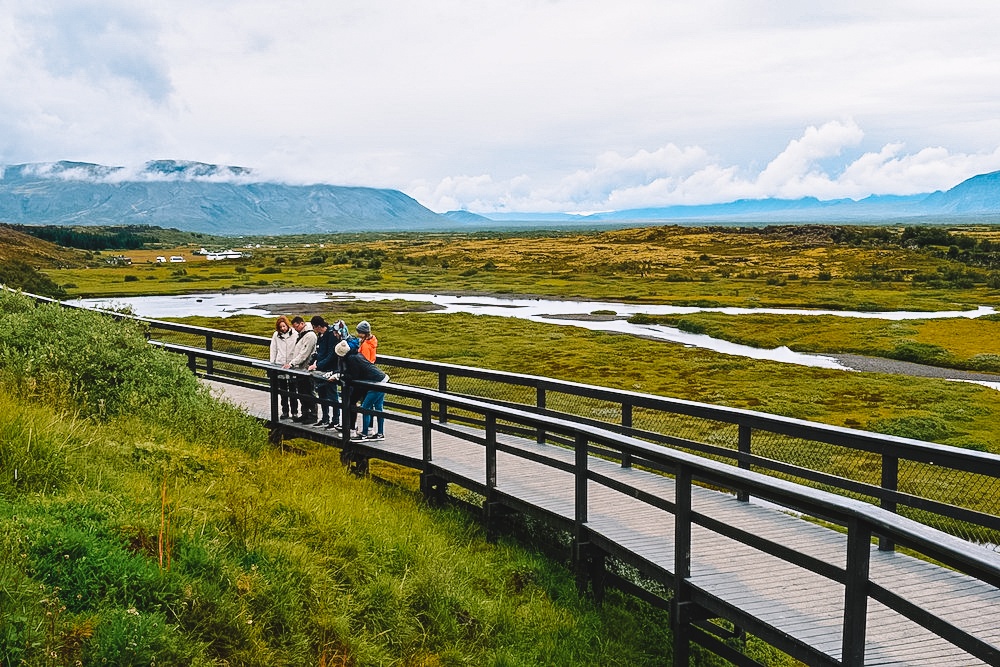 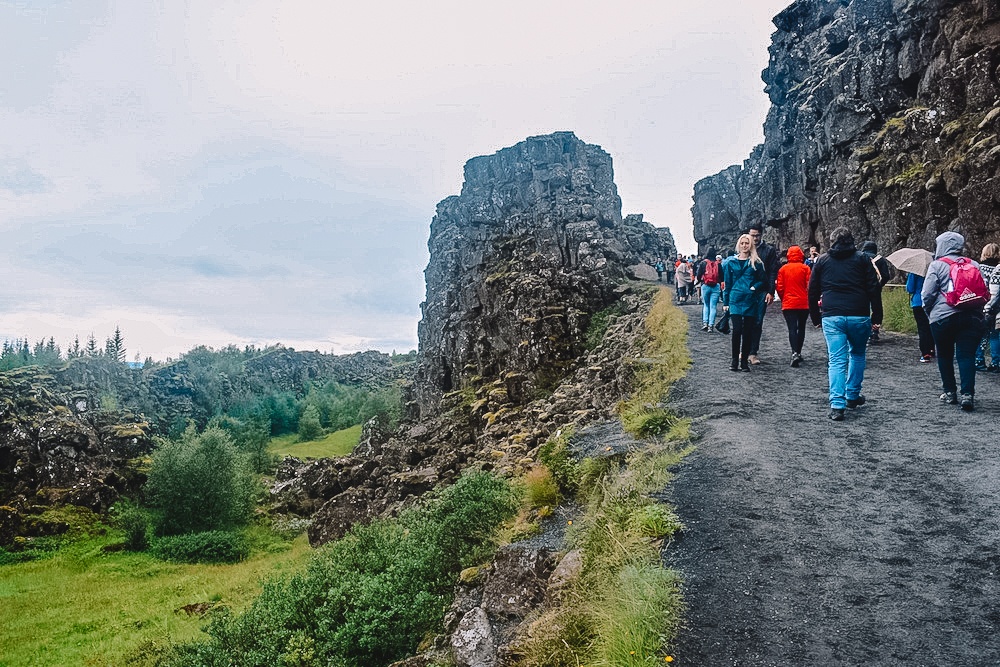 Despite being smaller than Gullfoss and not actually in the standard Golden Circle tour, I preferred the Barnaffoss falls. Gullfoss is one gigantic waterfall that makes you feel small when you look at it, whilst Barnaffoss is made up by lots of smaller waterfalls. It’s very impressive to see when you first arrive, since you walk up to a viewing platform that overlooks the river, where lots of small waterfalls trickle into it. The water comes out from the black side of the gorge, without a visible river as its source. This because the black rock is actually an old lava field, and the river is underground within the rocks, and only comes to light where the falls join the bigger river. For those that may not know that yet, I have a degree in Geography, I find things like underground rivers that become waterfalls over a lava field pretty cool (if you very loosely define the word cool). Similarly to Gullfoss there is a viewing path and platform that goes around the river and waterfall, so that you can admire it from different sides and the surrounding area. These were considerably less busy when we visited, probably because we got there around 6pm when most of the day tours have already left. I didn’t find it as crowded and touristy as the previous stops, although I know that this can be very different at earlier times of the day. The Barnafoss falls, trickling in the river from within the lava field

Where to stay in the Golden Circle

Where you should stay depends on where you want to go next. If you’re visiting on a short trip and plan to stay in Reykjavik, a hotel there which I personally stayed at and really liked is the Fosshotel Raudara. Since you can visit the Golden Circle in one day staying in Reykjavik as home base from which to do day trips can be an effective way to do it. After the Golden Circle we travelled onwards to the Westfjords so we stayed at the Hraunsnef Country Hotel, a hotel in the middle of nowhere but on the road towards our next destination. Similarly if you want to spend more time in or around the Golden Circle you should be able to find accommodation there too, however I can’t recommend anything personally. 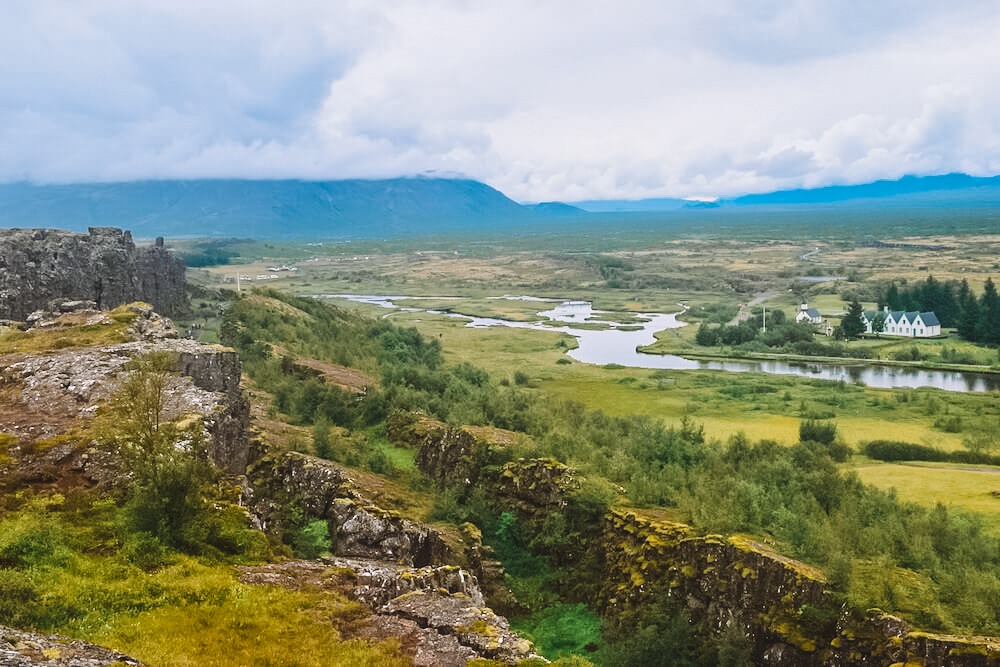 Have you been to Iceland and the Golden Circle? How did you find it? Let me know in the comments below! If you’re looking for more information on the Golden Circle check out this guide to the top highlights of the Golden Circle. I hope you found this 1-day tour map to Iceland’s Golden Circle useful. If you’re planning a trip to Iceland, these are the main stops that every online guide or travel agent will tell you to visit. They are some of the most impressive, with the explosive geysers and the big waterfalls. The fact that they are touristy and somewhat busy doesn’t make them any less beautiful, although just bear in mind that you will have to deal with crowds when you visit them, especially in summer.  However, if you want to see Iceland off the beaten track, check out these posts about Iceland’s Best Kept Secret and Iceland’s most scenic region!

Enjoyed reading my Iceland Golden Circle map & best things to do? Pin it! 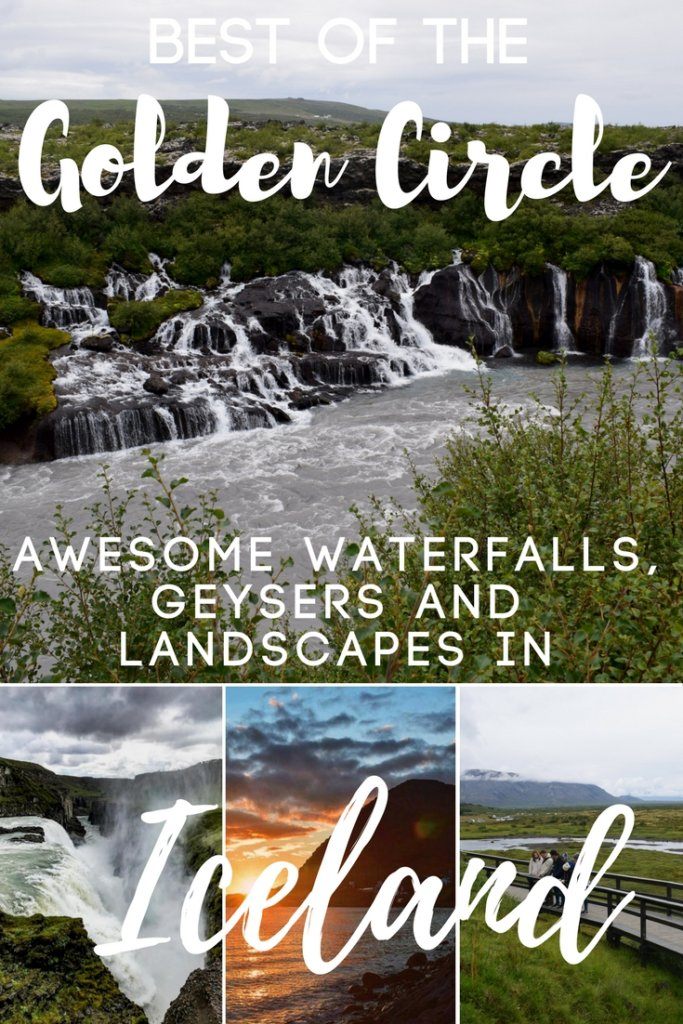 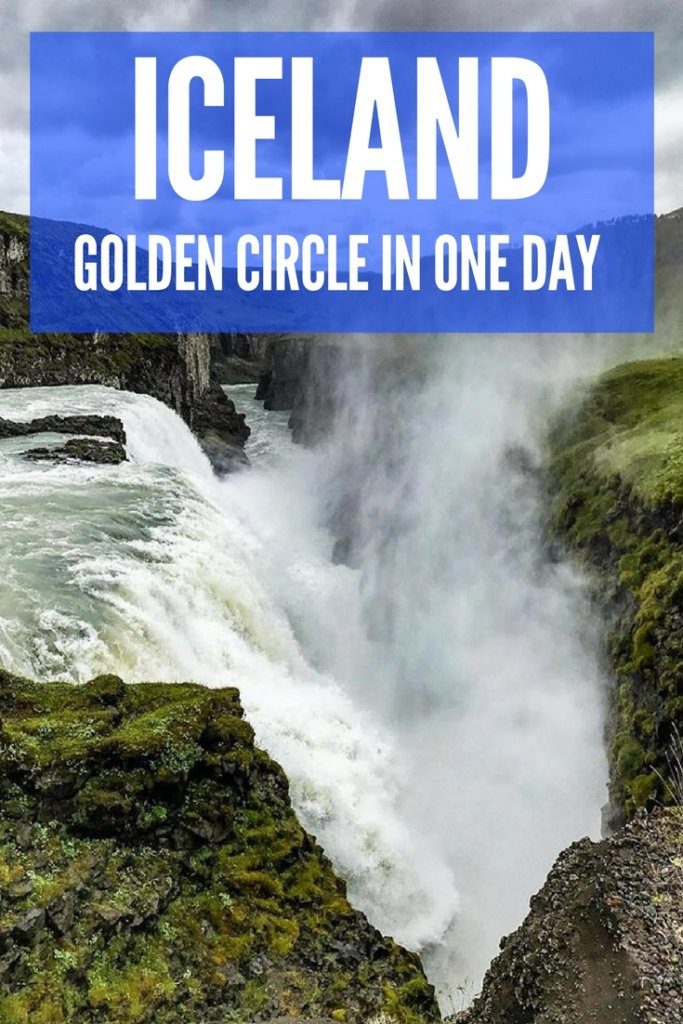 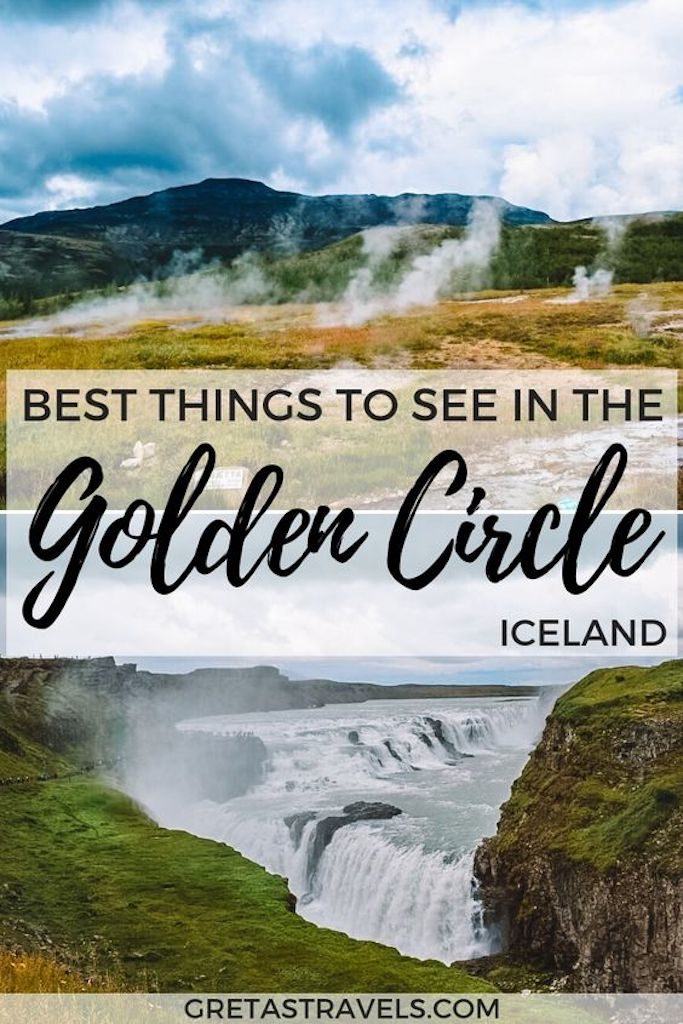 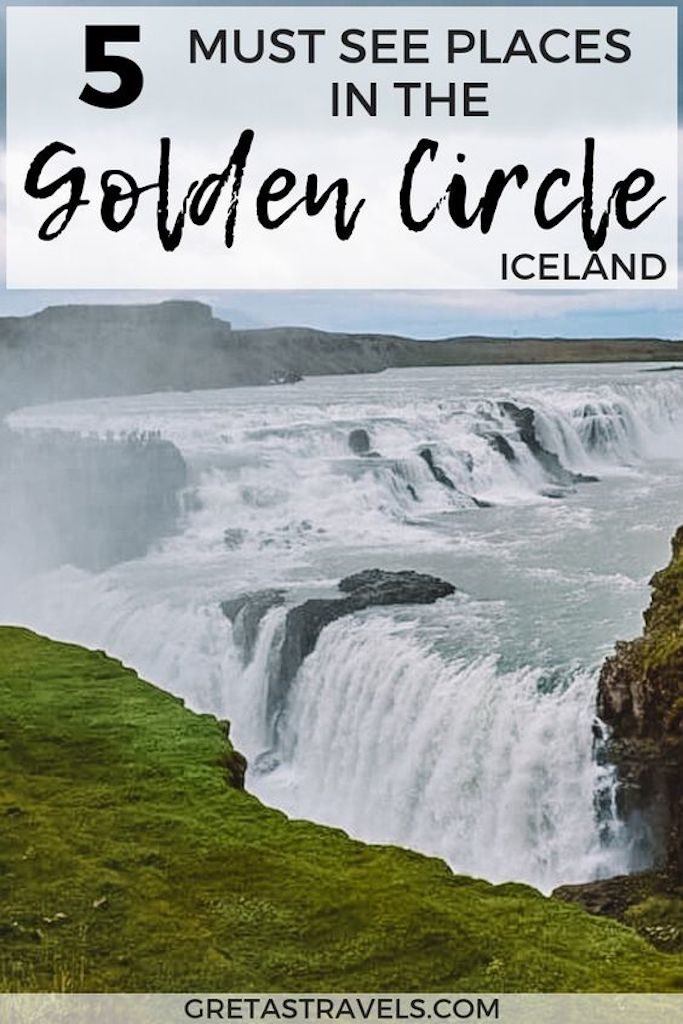 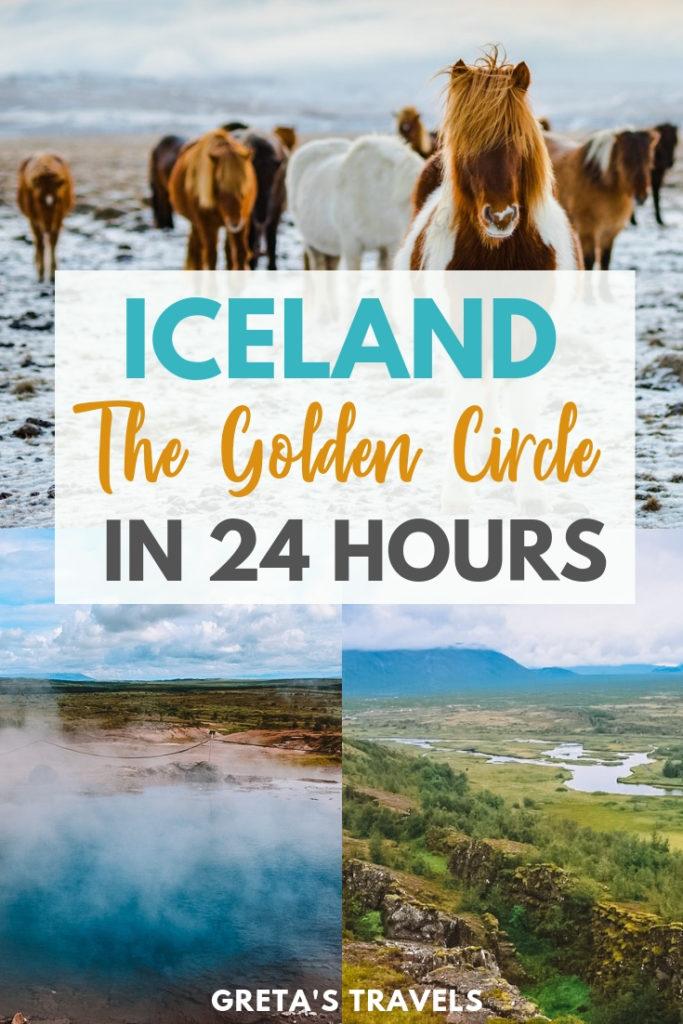 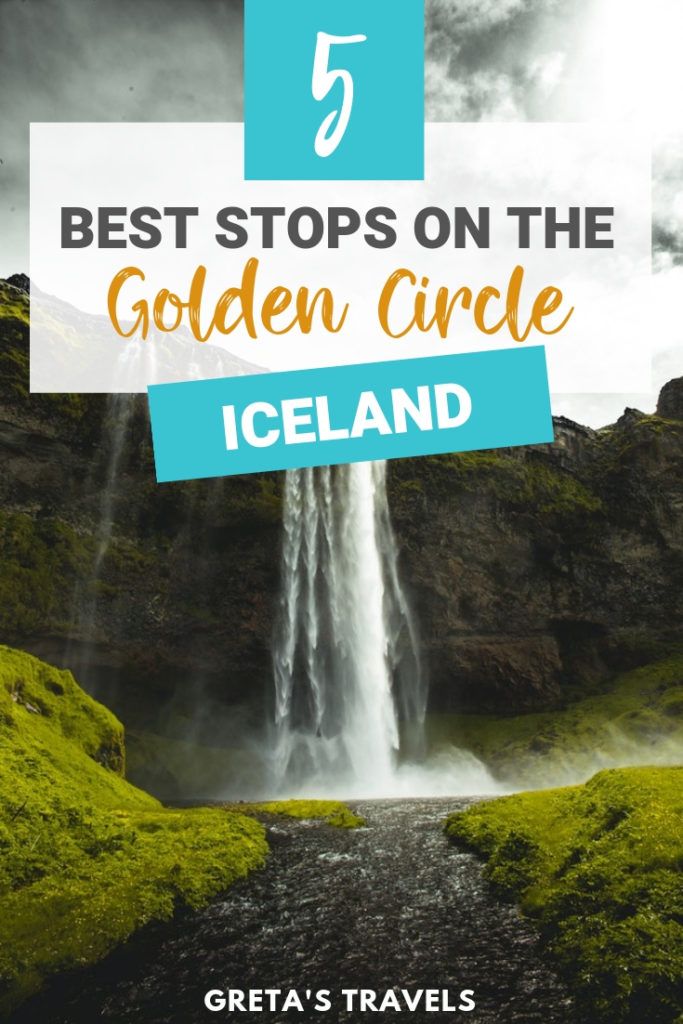 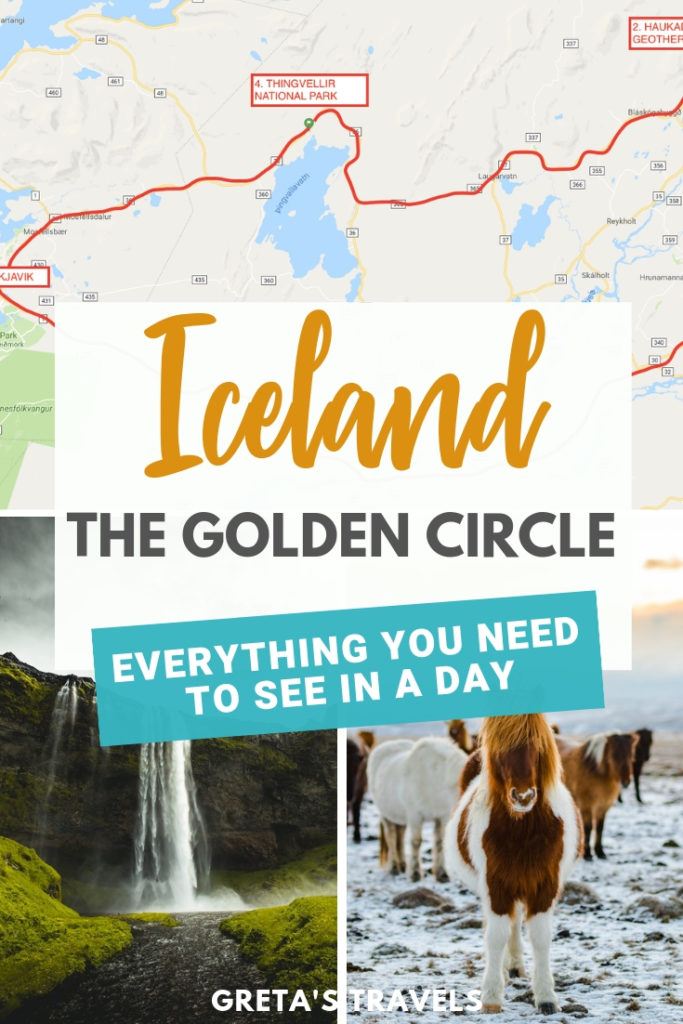 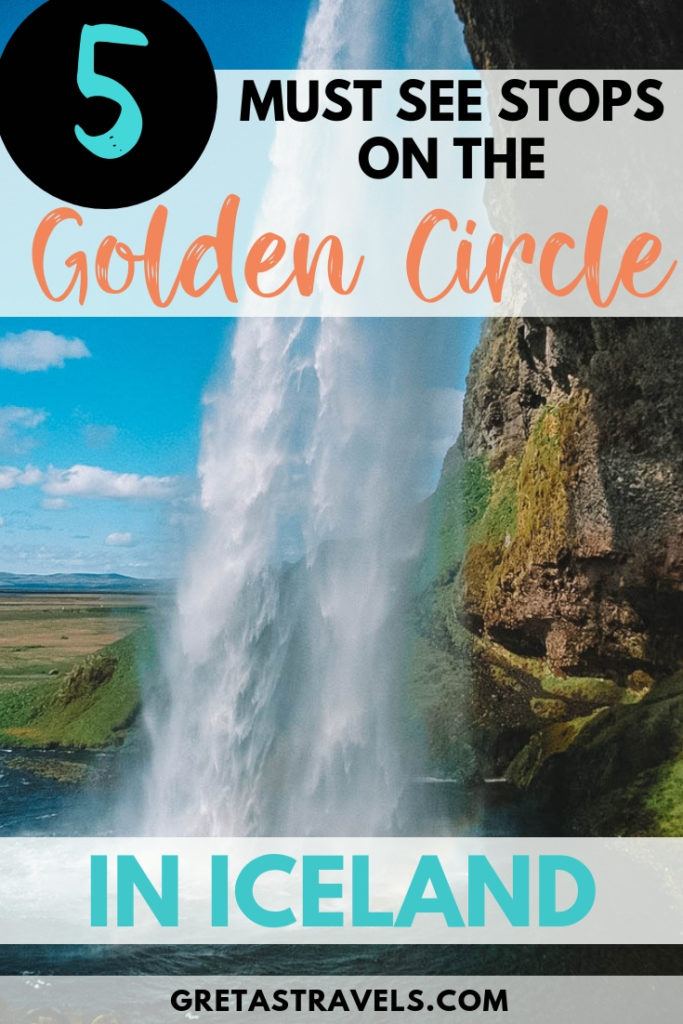