Westfjords Iceland Itinerary: 5 Places You Must Add To Your Westfjords Road Trip

Last updated on Oct 23, 2019 It's pretty likely that this article contains affiliate links. If you click on them I might receive a small commission, at no extra cost to you.

After exploring the Golden Circle, we set off on an epic road trip to the Western fjords of Iceland. The Westfjords are also known as “Iceland’s Best Kept Secret”, since it is so rural and off the beaten track. The Westfjords is one of the most beautiful regions of Iceland, with some stunning natural landscapes. If you’re planning your own road trip around the Westfjords this ultimate guide and itinerary is for you. I’ve included everything you need to know about getting around and what to do to have an amazing time in the Westfjords. 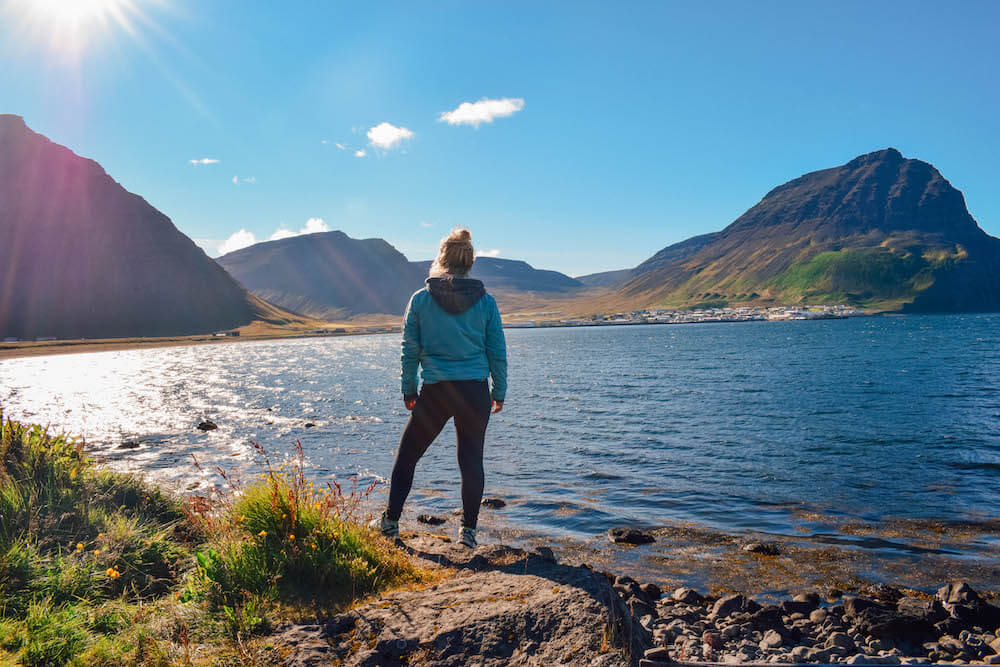 Driving break in the Westfjords, enjoying the view over the fjords

Basic information about the Westfjords of Iceland

The Westfjords is a large peninsula in northwestern Iceland, it covers approximately a 22,000 square kilometre area, with a population of around 10,000. This is due the very mountainous and jagged coastline, which make communication by land very difficult. The lack of flat land also limits the potential for agriculture, which makes fishing the primary industry and vital for the local economy. The weather in the Westfjords is very variable, ranging from sun, rain, wind, heat and cold all in the same day. You can check out here my packing list for advice on what to bring. 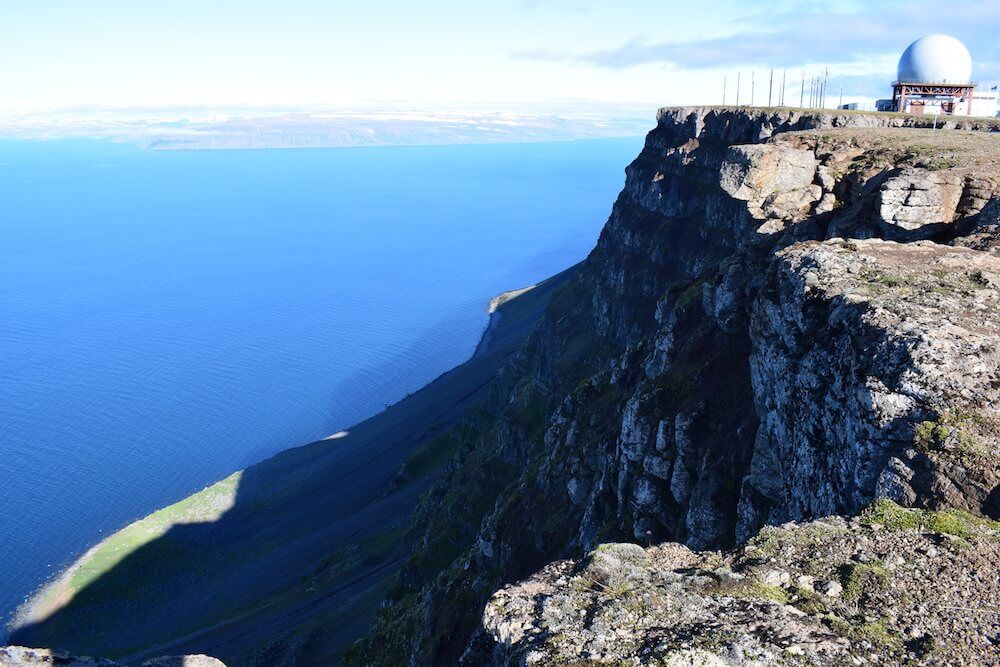 Standing on top of the cliffs of the Westfjords; feels like the end of the world

Westfjords itinerary: How to get there

We spent an entire day driving from our accommodation close to the Golden Circle to Isafjordur, where we stopped for a night and used it as base to then explore the rest of the fjords. The drive in itself is very scenic, changing from wide open landscapes to tiny gravel roads on the edge of the cliffs. We did a lot of stops along the way to break up the driving, and every stop was more impressive than the one before it. We stopped at small towns, small cafes and even just along the road wherever there was a scenic landscape that we could enjoy for a while as break from being sat down all the time. Considering I’m not a car person, the views were so beautiful that I didn’t mind too much being sat down for so long. 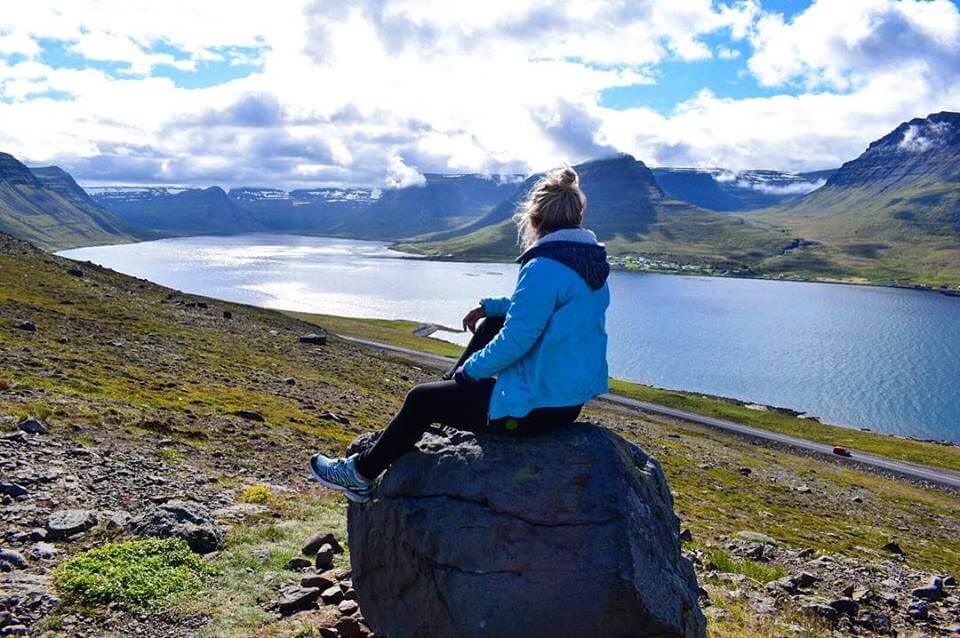 Enjoying the view during one of the many stops we did while driving in the Westfjords.

Westfjords itinerary: 5 places you must see

After the first day of driving we arrived in Ísafjörður, where we stayed one night before setting off to explore the rest of the Westfjords. With a population of 2,600 people Ísafjörður is the largest town in the Westfjords (gives you an idea of how scarcely populated the rest of the region is)! The town is located on a flat piece of land, surrounded by the mountains of the fjords. To get to Ísafjörður you can either drive over the mountains on gravel roads, or through really long tunnels. One of the tunnels especially was both impressive and scary at the same time. 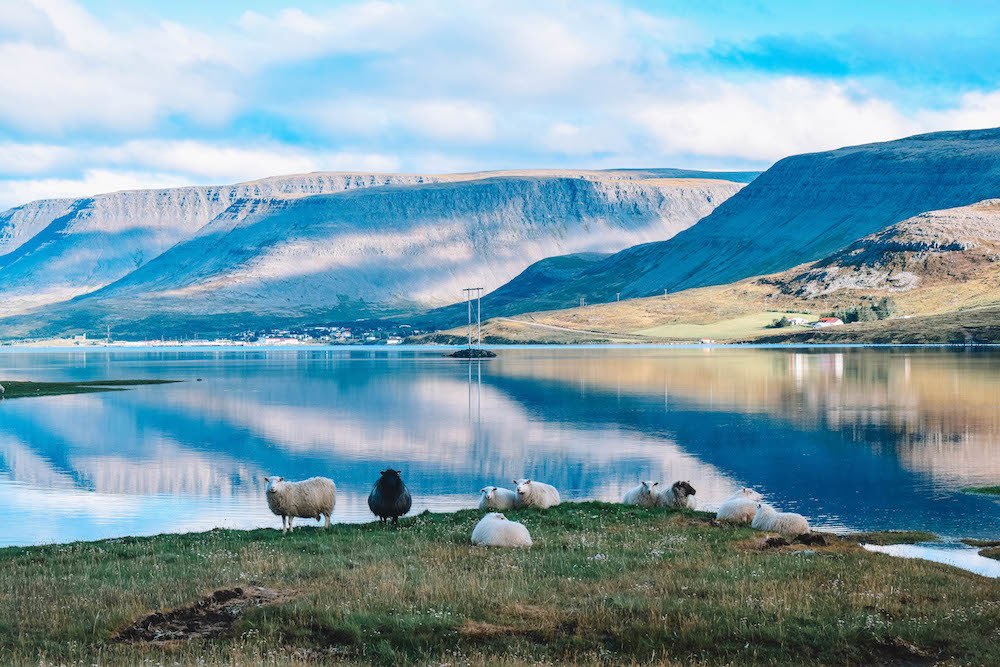 Reflections in the Westfjords in Iceland

When leaving Ísafjörður we drove for a whole nine minutes inside a one way tunnel, with multiple recesses along the way, where we had to stop every time we met a car coming from the opposite way. We spent the other nights in the fjords at Patreksfjörður, a small village with 650 inhabitants. Patreksfjörður is an adorable town, there might not be much to do but it’s a cute town to walk around, explore the harbour and a great place to base yourself from which to adventure around the Westfjords. 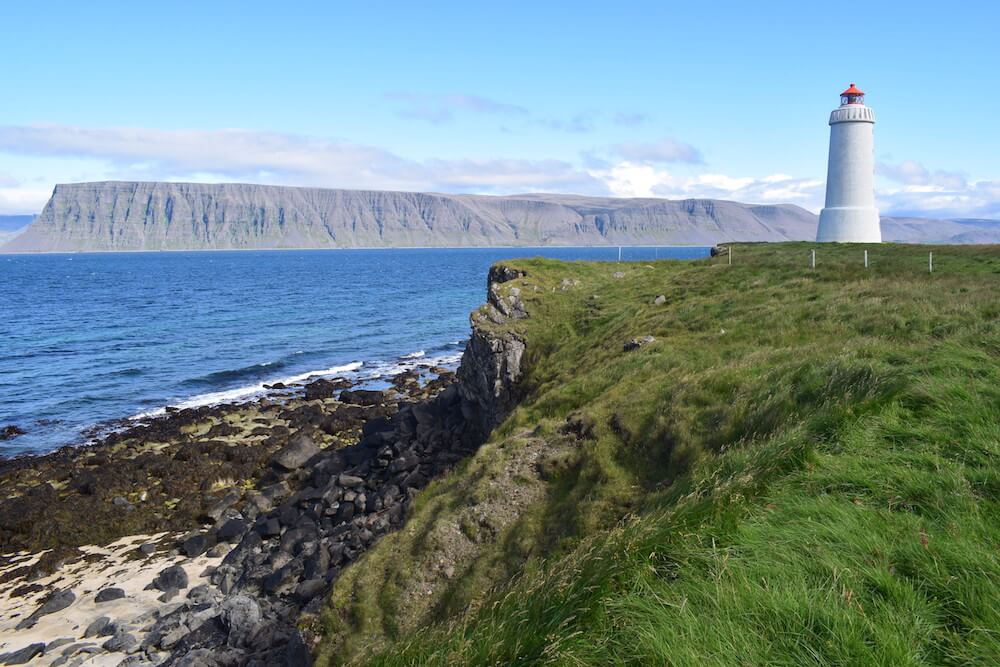 A lonely lighthouse at the edge of the Westfjords

The amount of waterfalls in Iceland was one of the things that impressed me most about my trip. Dynjandi was one of the most impressive waterfalls I’ve ever seen, not just on this trip. It’s a series of seven waterfalls, with a combined height of over 100 metres. Dynjandi is the main big one, that then flows into the smaller river and falls (that have other names) before reaching the sea. When we arrived it was raining, but as you get closer to Dynjandi there is so much spray and mist from the waterfall, that we could barely notice the difference between raindrops and waterfall spray. Standing close to the waterfall, hearing the power and rush of the water really makes you realise how small you are. 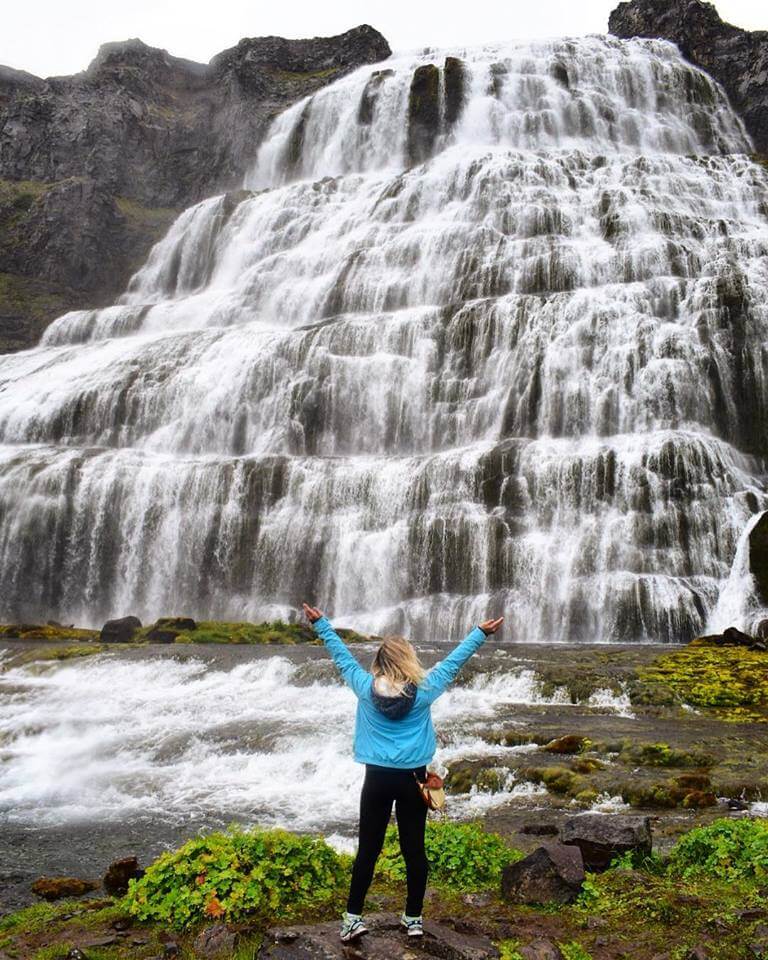 Admiring Dynjandi Falls in the Westfjords 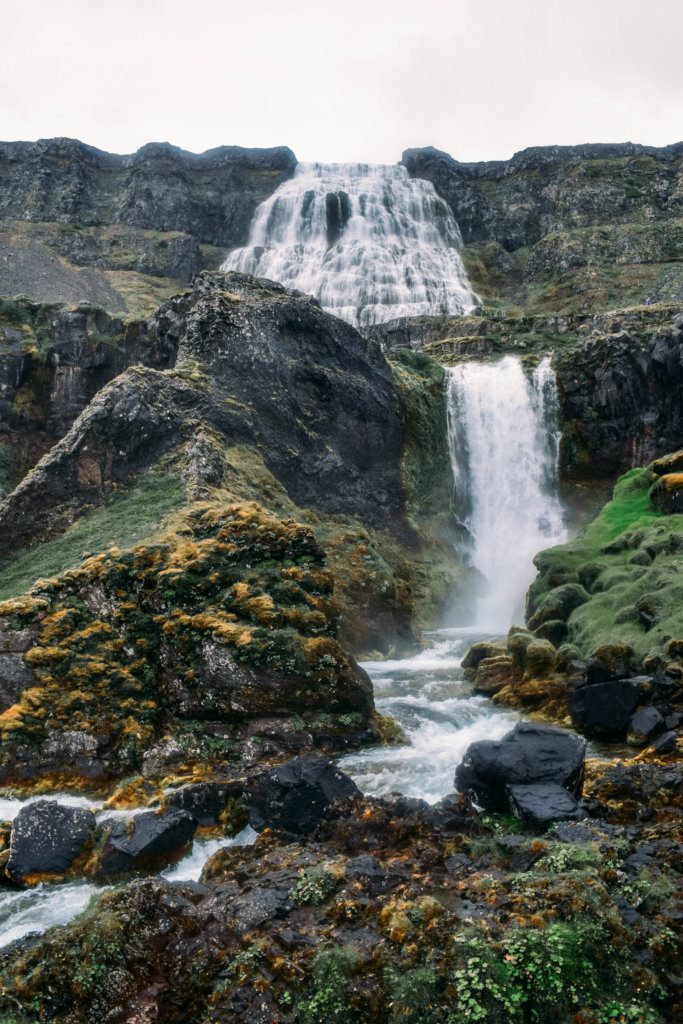 Two of the seven waterfalls at Dynjandi

Látrabjarg is the most western point in Iceland and Europe, and a great spot for seeing puffins. It’s a very scenic destination, with huge cliffs that fall vertically in the sea. From the moment you step out of the car to when you get back in to leave, the one thing you will notice predominantly is the wind. The wind is really strong along these cliffs, to the point that there are signs dotted all along the coast warning people to be careful. You are recommended to lie on your belly and slide along if you want to see the puffins below, as it can be dangerous to stand too close to the edge. All along the cliff edges you can see seagull and puffin nests, and you can admire them flying overhead (the seagulls anyway, puffins aren’t very graceful when flying). The steep cliffs of Látrabjarg 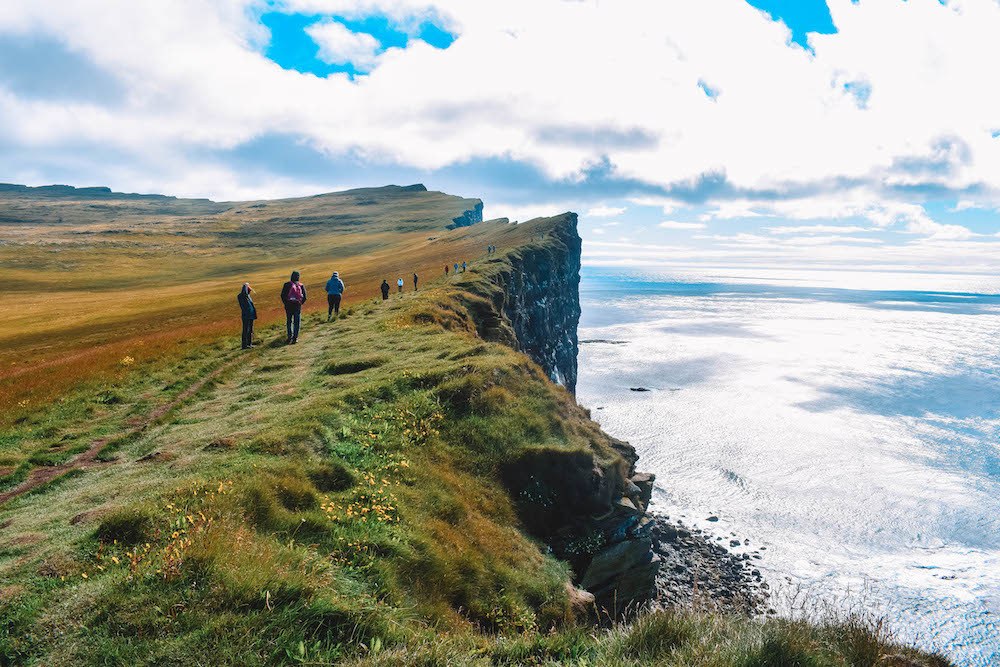 The cliffs of Latrabjarg

This is Iceland’s famous red beach. It’s a ten-kilometre stretch of beach, surrounded by mountains on three sides and the turquoise sea in front. It’s in one of the most remote regions of the area, and to reach it you have to drive up and down a steep gravel road with tight turns. The views are stunning, however it is a little scary to drive there! Once we got there we were the only people there, and went for a walk along the beach, enjoying the peace and quiet of being alone on a ten-kilometre beach. They said that there are often seals relaxing close to the sea, so we walked for a while in the hope to see them, but weren’t lucky enough. 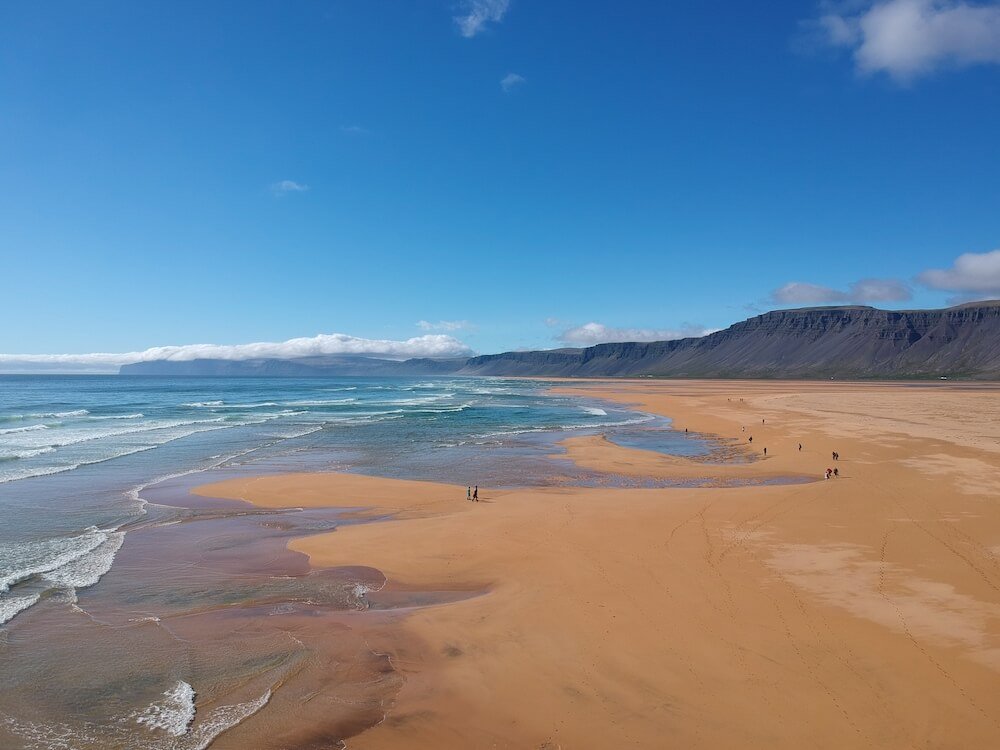 Where to stay in the Westfjords, Iceland

While exploring the Westfjords we moved around a lot, using first Ísafjörður then Patreksfjörður as home base. In Patreksfjörður we stayed at the Westfjords Fosshotel and in Ísafjörður at the Hotel Ísafjörður. Both hotels were lovely, offering typical Icelandic breakfast and dinners. They are centrally located so that you can go on walks to explore the towns, with pretty views over the fjords. 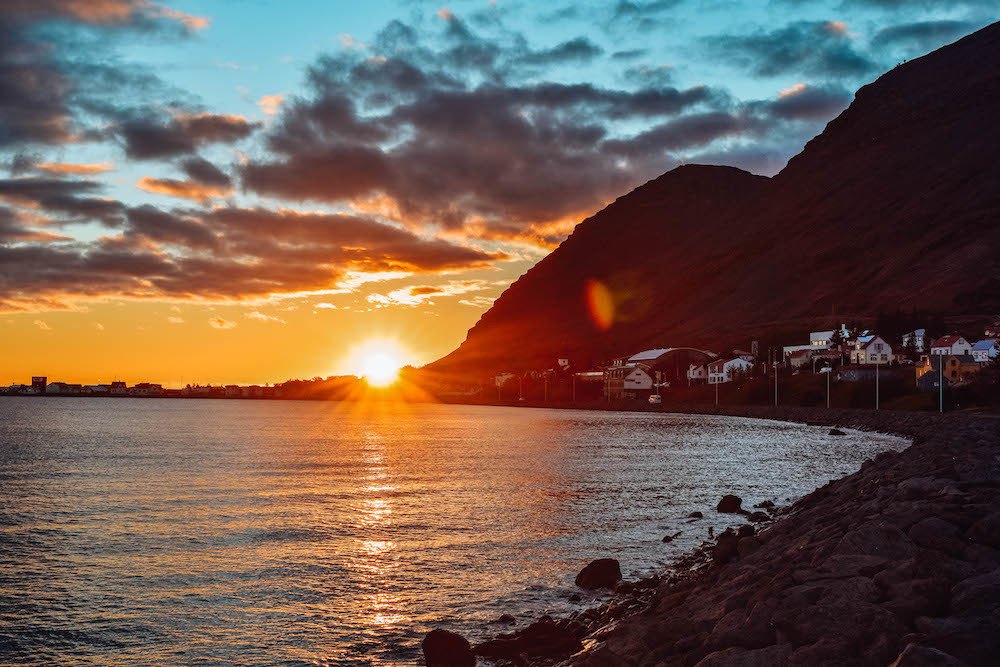 Sunset over Patreksfjordur in the Westfjords of Iceland 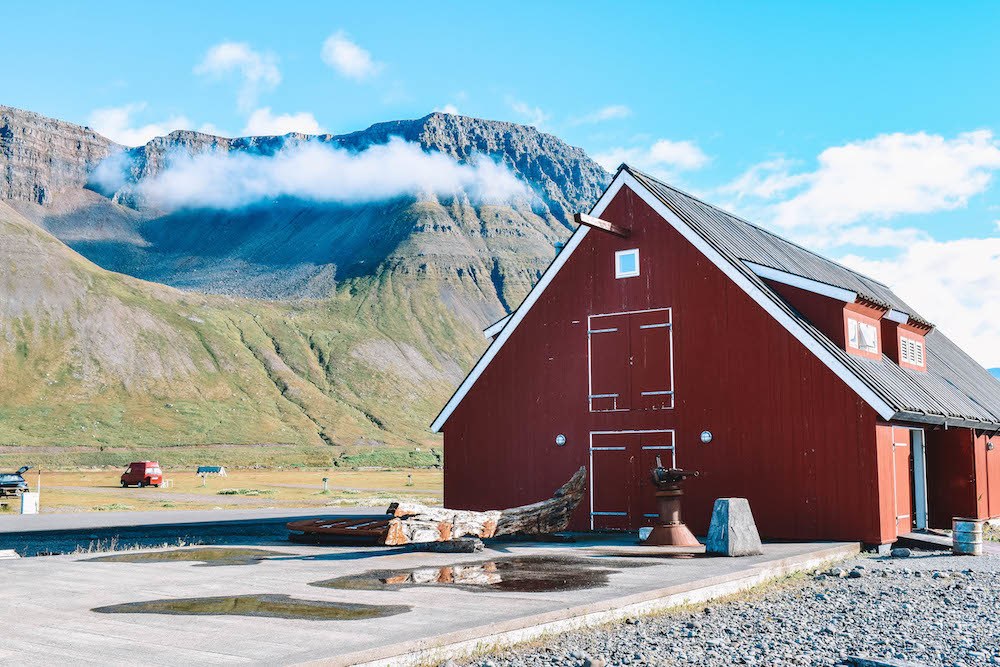 A red house on the outskirts of Patreksfjordur

You now know about Iceland’s best kept secret, don’t tell anyone! Visiting the Westfjords was the highlight of my trip to Iceland, as it was an area completely different from Reykjavik, Snaefellsnes or anything else I had seen before. The vast landscapes, dotted by waterfalls, fjords and cliffs, with very little human presence, made for an incredible adventure. Have you been to the Westfjords in Iceland? What did you think of them? Let me know in the comments below! I hope you will find this Westfjords itinerary useful in planning your own road trip to the Westfjords of Iceland. 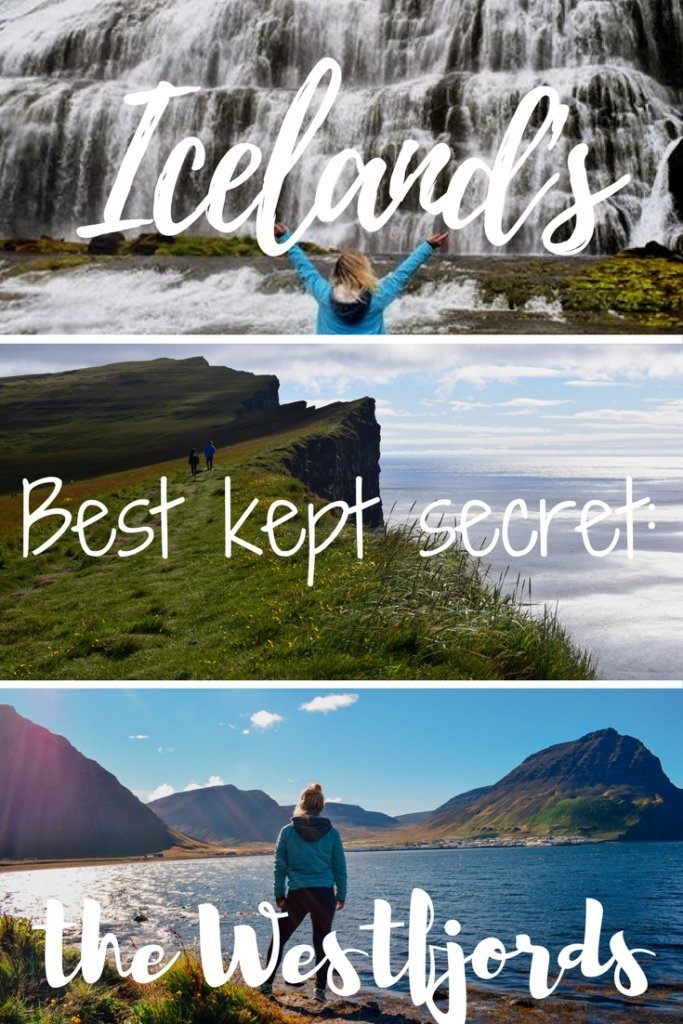 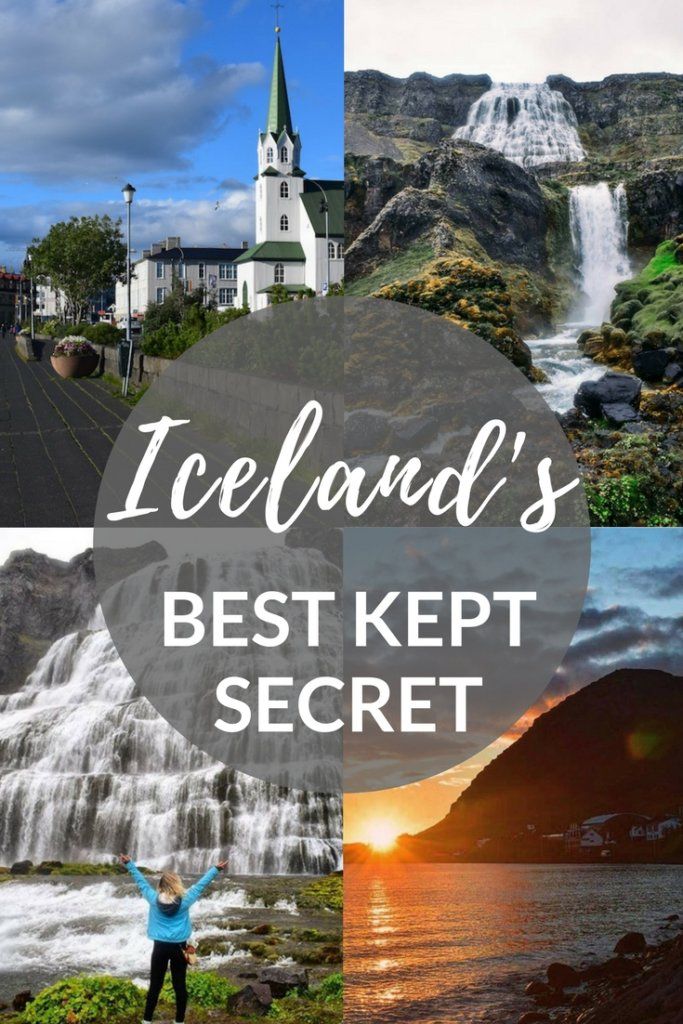 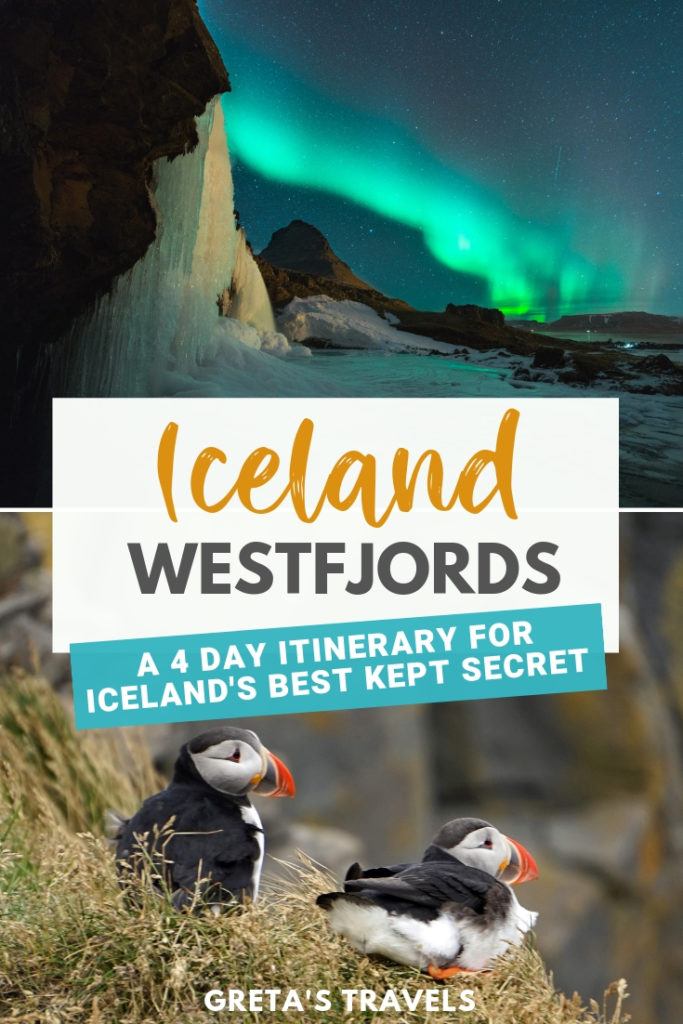 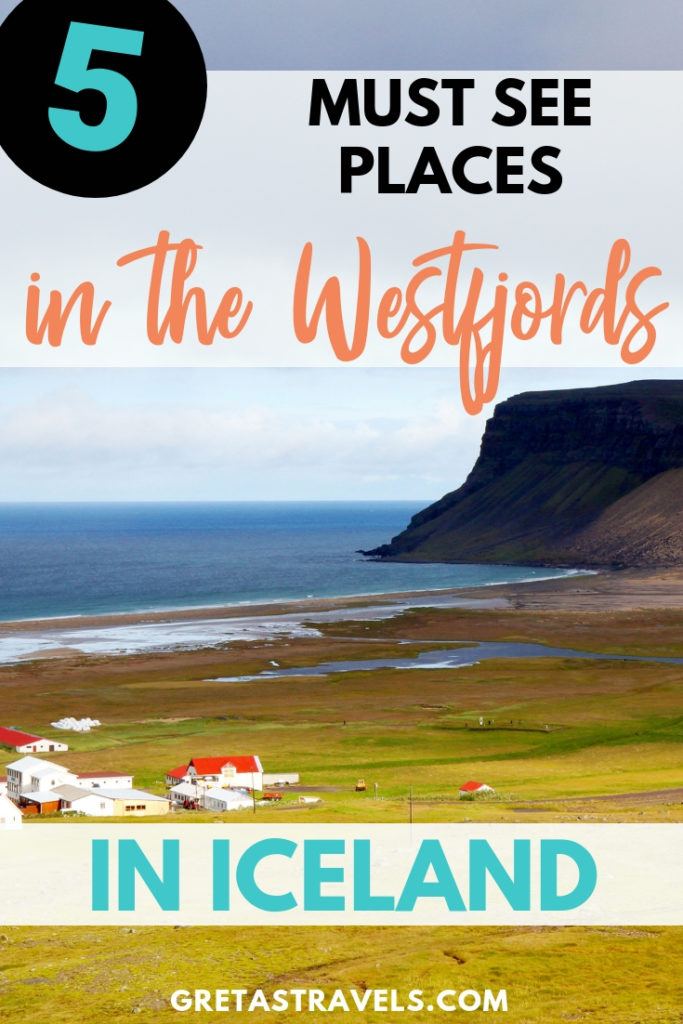 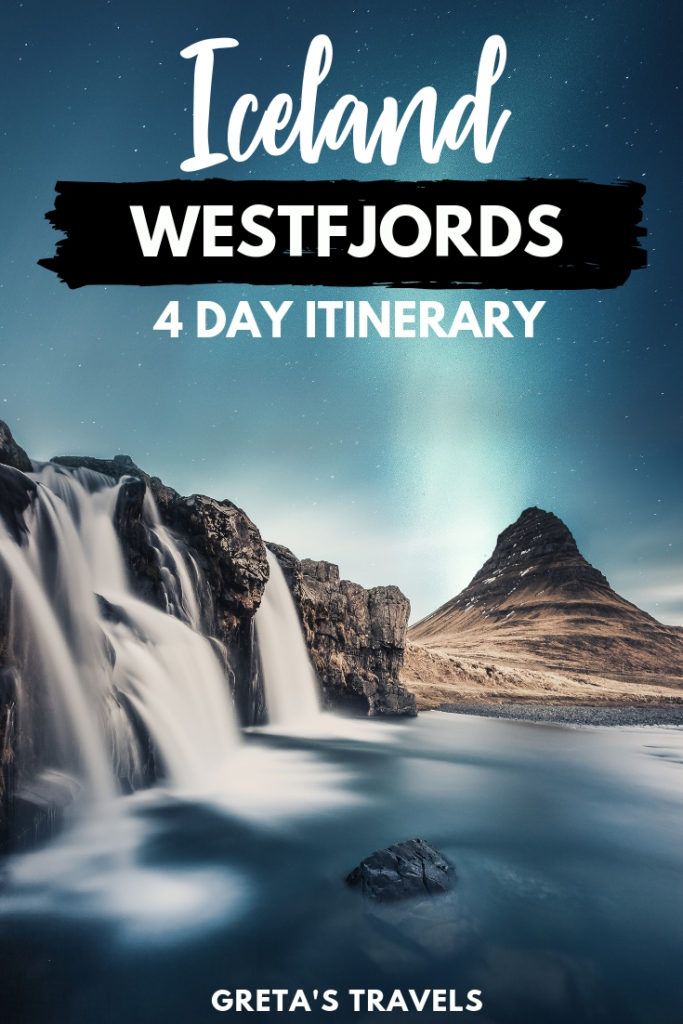 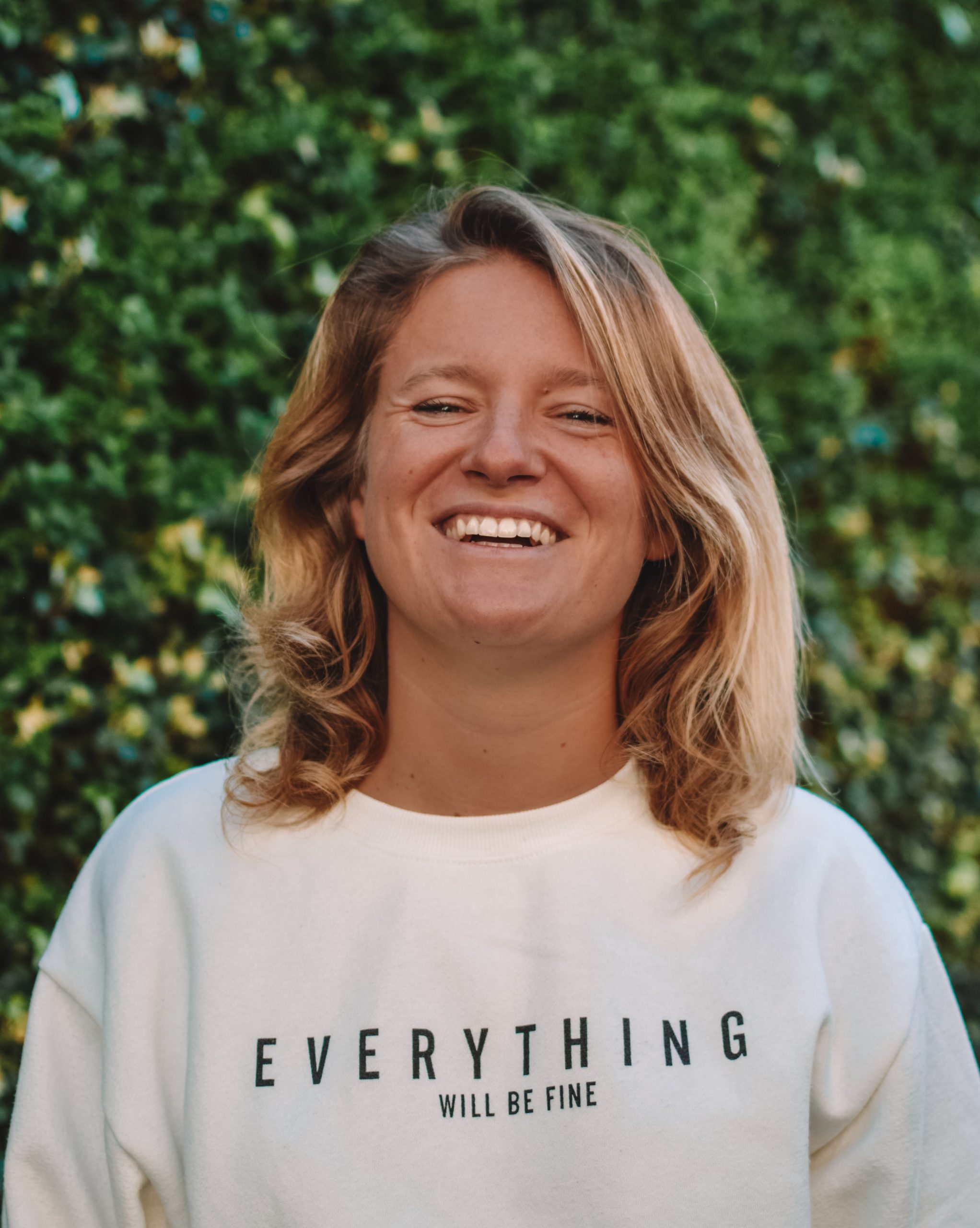