The city of San Francisco is pretty small for a ‘big city’, but it’s packed with fun things to do, diverse people, different cultures, and spectacular foodie scene.

Having lived in the Bay Area for the majority of my life, I love showing people around the city and creating unique itineraries for those who are visiting San Francisco – whether they’re a first time or repeat visitor.

In this post, I’m going to give you some tips on how best to navigate the city and include a few “must-sees” to add to your itinerary for a weekend in San Francisco. 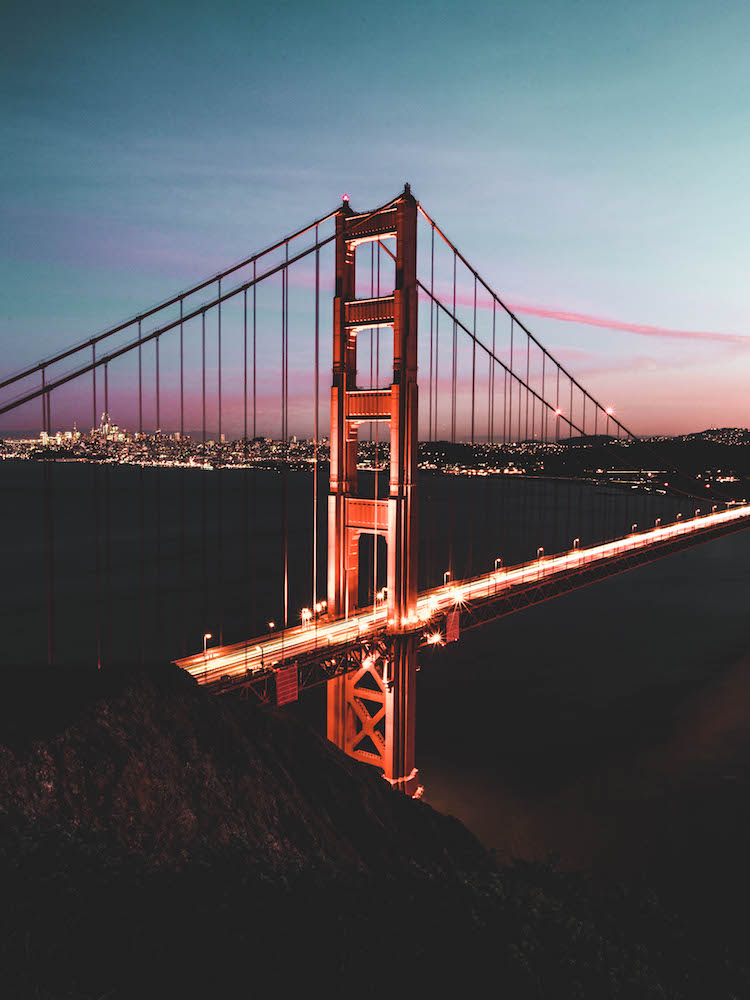 Getting to San Francisco

San Francisco is a city in Northern California.

No matter where you’re coming from, almost every flight will take you into San Francisco International Airport (SFO) located in South San Francisco, or alternatively into Oakland Airport (OAK) which is just across the Bay from SF.

You can also get to San Francisco quite easily by car, driving from nearby cities. Many travellers do road trips from Los Angeles to San Francisco, enjoying all the beautiful spots along the way.

Getting around San Francisco

Now that you’re here you have a few different options for how to get around.

From the airport, you can either take a BART train (San Francisco’s version of the subway) to make it to the more central part of the city, or you can hail a cab/rideshare service which will likely cut your time in half and drop you right where you need to be. 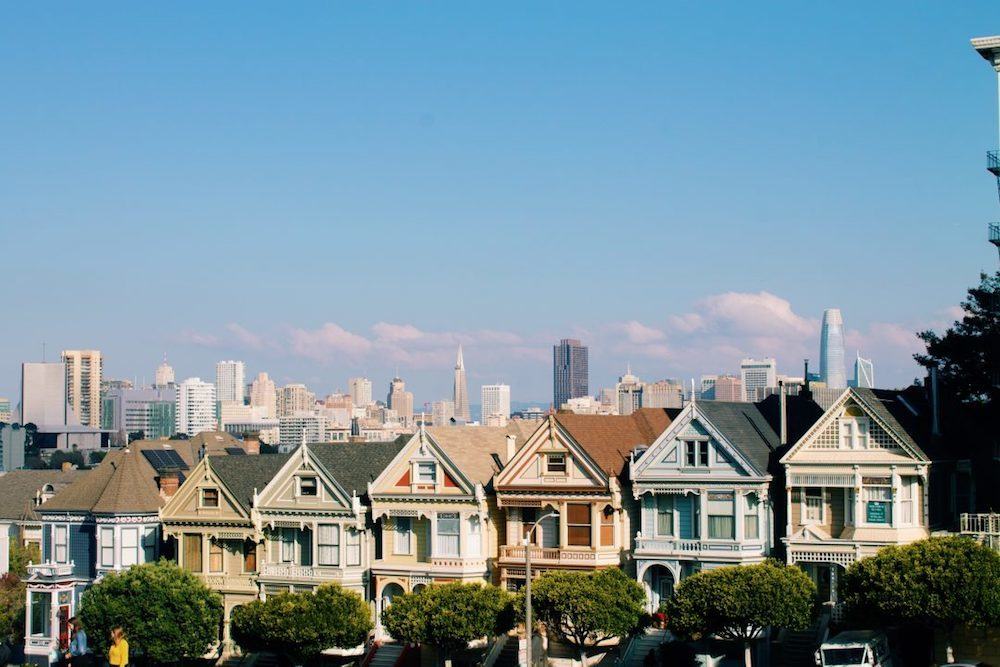 The only downside is that the taxi/rideshare option is likely to be 2x (or more) the cost of BART.

Once you’re settled and ready to explore the city you can navigate throughout San Francisco a few different ways.

BART, taxis, or rideshares are always an option, but using San Francisco’s bus system, MUNI, is going to be one of the cheapest options and can get you to pretty much anywhere you need to go.

Not looking to spend any money?

San Francisco is a very walkable city because it’s so compact – you can walk to most nearby places within 30 min-1 hour. 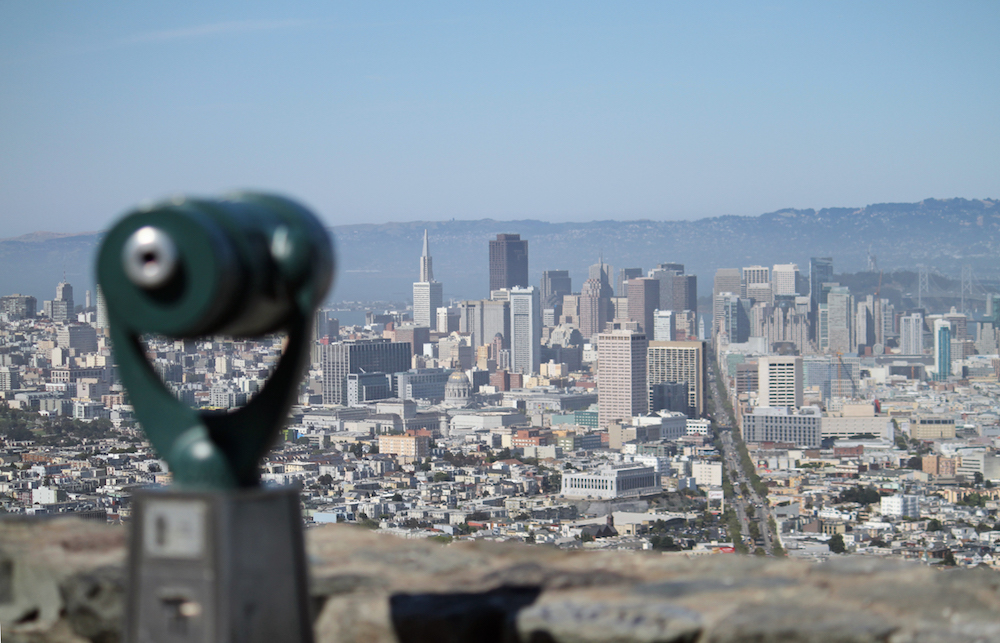 One of the best things to do when you first arrive is to simply go for a walk and get lost around the city to get your bearings.

There aren’t that many dodgy areas, and if you do come across one it’s usually pretty obvious right away and only lasts for a few blocks at the most.

I always recommend this as the first thing to do in the city because the streets are where you get a feel for the ‘real’ San Francisco and the vibrancy that it’s so well known for.

Just watch out for the notorious hills that will probably leave you out of breath at least once or twice. 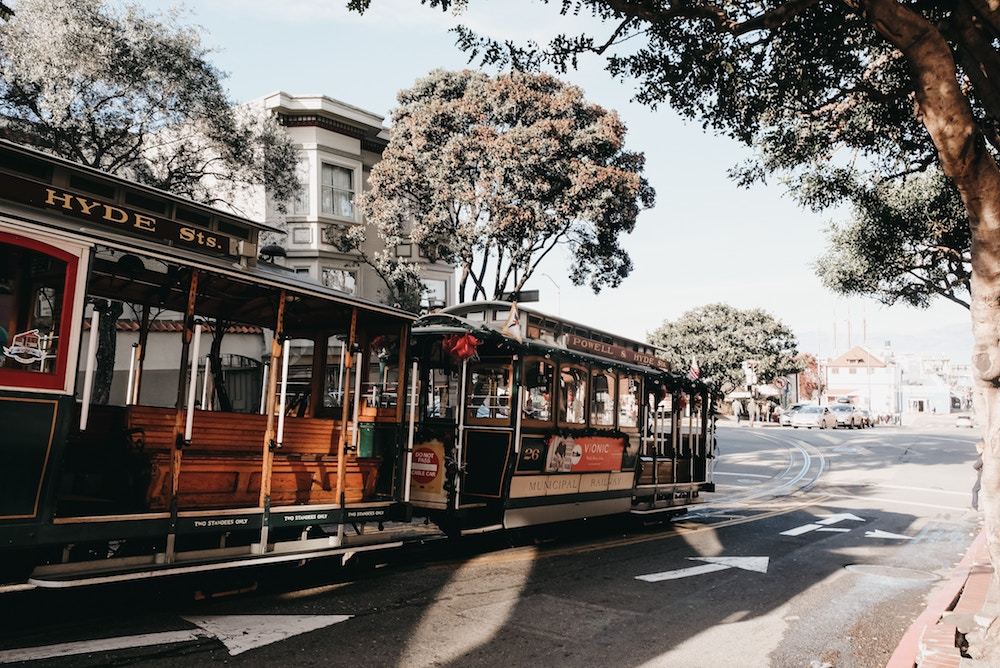 The cable car in San Francisco, United States of America – photo by the Atlas Heart

Walk through Chinatown and North Beach

Two of San Francisco’s most charming neighborhoods are Chinatown (the 2nd largest in the world) and North Beach (aka Little Italy), and they’re literally right next to each other!

It doesn’t matter where you start with these two since they border one another but they are entirely unique neighborhoods. When you walk through Chinatown, you’ll feel transported to another time and place.

There are street markets and vendors lining most streets in Chinatown with the smaller alleyways being occupied by hidden restaurant fronts and apartment entrances.

I don’t think I’ve ever experienced a quiet moment in Chinatown, and I mean that in a good way. It’s a neighborhood that is known for its energy.

For a truly authentic experience, stop in to Bow Bow Cocktail Lounge for some cheap beers and exquisite karaoke, or stop into the Fortune Cookie Factory to learn about the famous cookie and grab a sample. 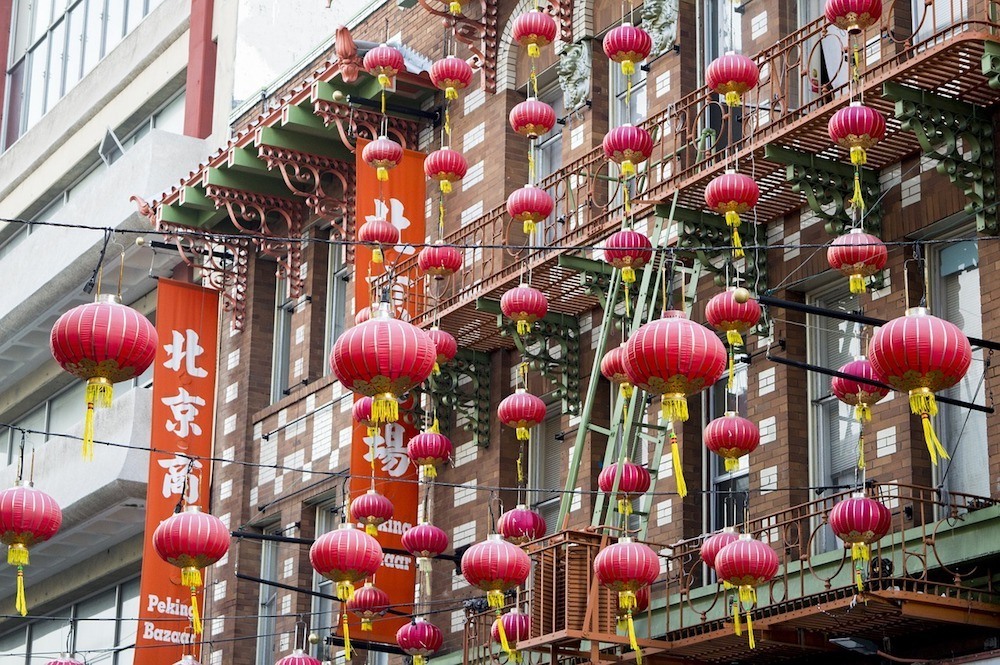 Chinatown in San Francisco – photo by the Atlas Heart

Nearly every week the popular San Francisco startup, Off the Grid, hosts a gathering of food and beverage trucks in a hot spot location.

Off the Grid is a great lunchtime or nighttime activity for people of all ages – you’ll see families, friends, dates, dogs, and more at Off the Grid events.

But, obviously the best part is the food trucks! These trucks are usually local businesses that are offering their best sellers in a fun, outdoor environment.

Most of these events also have some sort of live entertainment there too, in the form of bands, solo acts, acrobats, and magicians. You can find their schedule of local pop-up markets around San Francisco here. 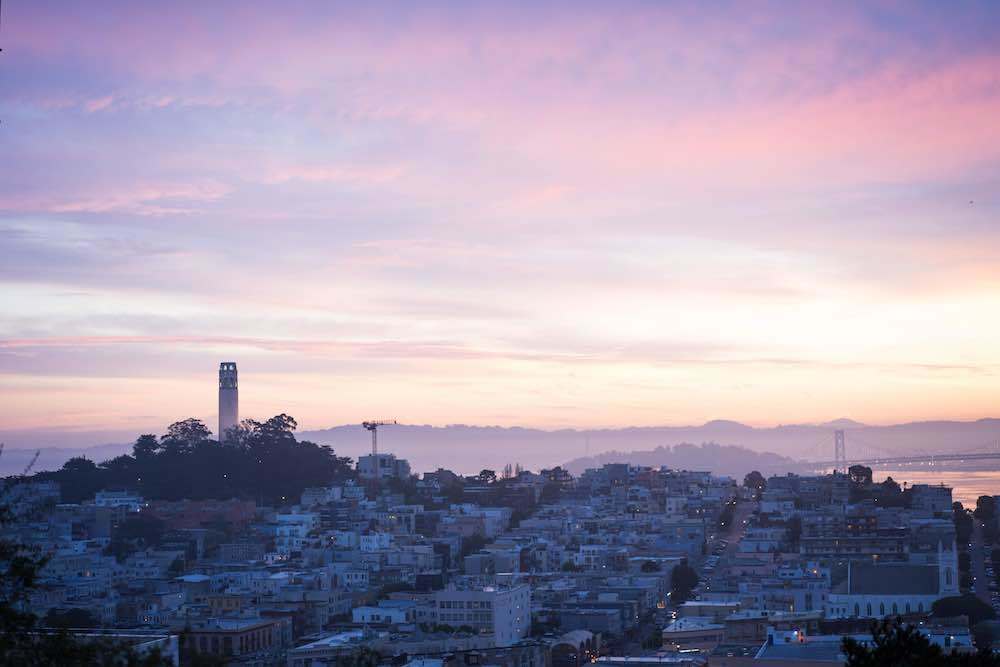 Embrace your inner tourist and head to the second largest tourist destination in the city – Fisherman’s Wharf. This historic district in San Francisco used to be the primary port and dockyard for local fishermen.

In fact, there are some that still use it today. However, the popularity of the Wharf is now mainly due to Pier 39, Ghirardelli Square, and the sun bathing sea lions.

Pier 39 has small amusement park rides and attractions, along with fun and kitschy restaurants.

Ghirardelli Square is public plaza surrounded by luxury hotels, restaurants, and the Ghirardelli Chocolate Company that stands out because of a massive light-up sign overhead – you can’t miss it!

Nor should you the chocolate sundae is absolutely mouth-watering. 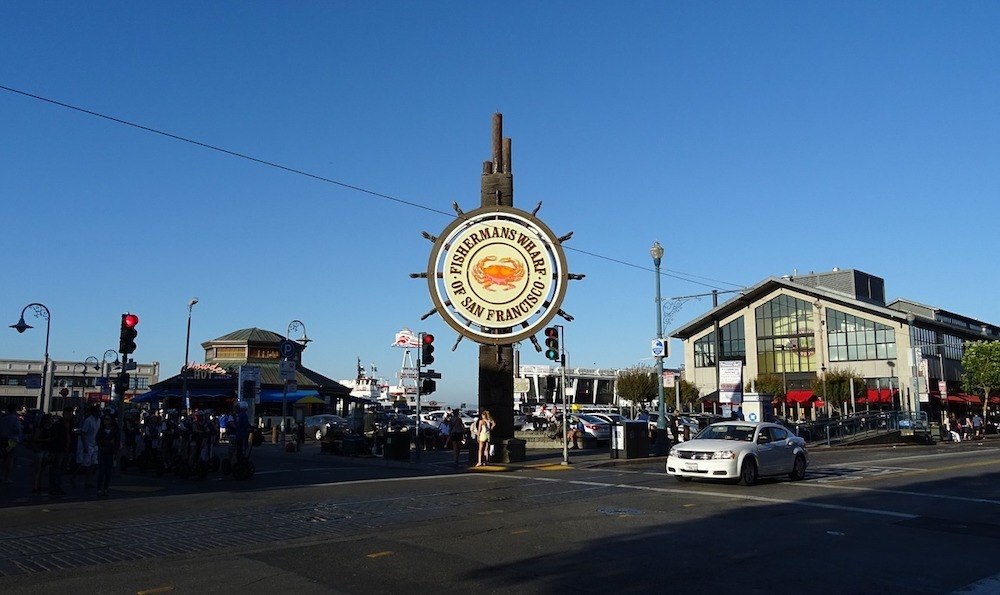 Fishermans Wharf in San Francisco – photo by the Atlas Heart

The Haight-Ashbury neighborhood is one of the most fun, funky, weird, and welcoming places in San Francisco. It has its roots as the birthplace of the hippie counterculture movement of the 1960s and clings to that image today.

Some of the best thrift stores in California are in the Haight. You can find the practical, costume, over-the-top, and plain cool fashion accessories – and necessities – at these thrift stores.

Popular thrift stores to note in the neighborhood are Wasteland and Buffalo Exchange. 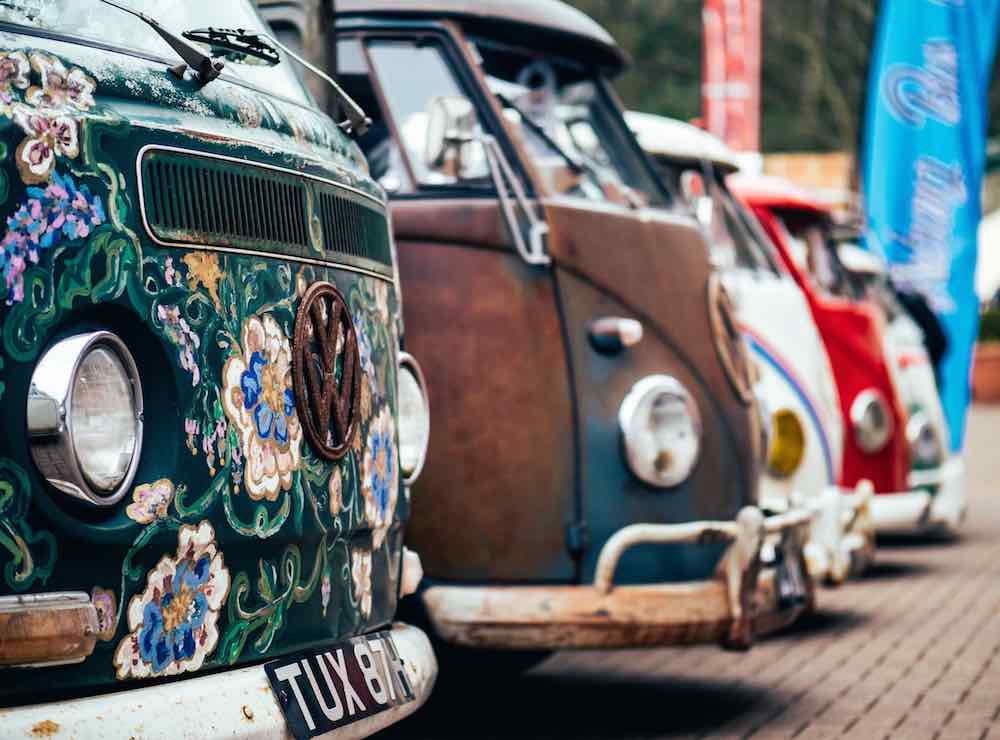 Haight Ashbury in San Francisco – photo by the Atlas Heart

See a Sing-a-Long in the Castro

Speaking of fun neighborhoods, San Francisco’s Castro district is one of the most exuberant.

The Castro was one of the first gay neighborhoods in the world and today the district remains a symbol for LGBT activism and awareness world-wide. The Castro also hosts one of the most fun events in San Francisco, sing-a-longs!

They usually host a sing-a-long once a month and rotate their movie selections each month. Past events have included The Sound of Music and The Little Mermaid, with costume contests as the show openers.

It’s a hoot and you should go for the experience even if musicals aren’t your thing. 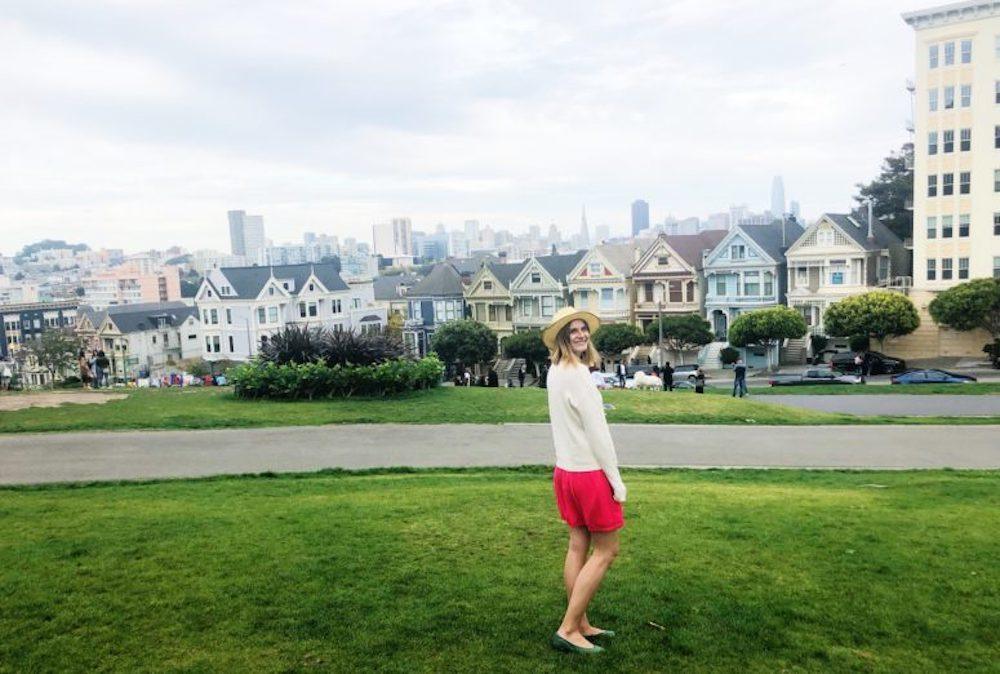 The Painted Ladies in San Francisco – photo by the Atlas Heart

Grab a Burrito in the Mission

The Mission District in San Francisco is another neighborhood that lets you get a taste of a different world.

The neighborhood has had Mexican influence since the 1700s and that culture is cemented in the district to this day. The music, smells, and sights in the Mission are unlike any other neighbourhood in the city.

Grab some of the most delicious burritos you’ll ever taste in California, and take yourself on your own walking tour of the many elaborate murals that line the walls, fences, and sidewalks in the Mission. 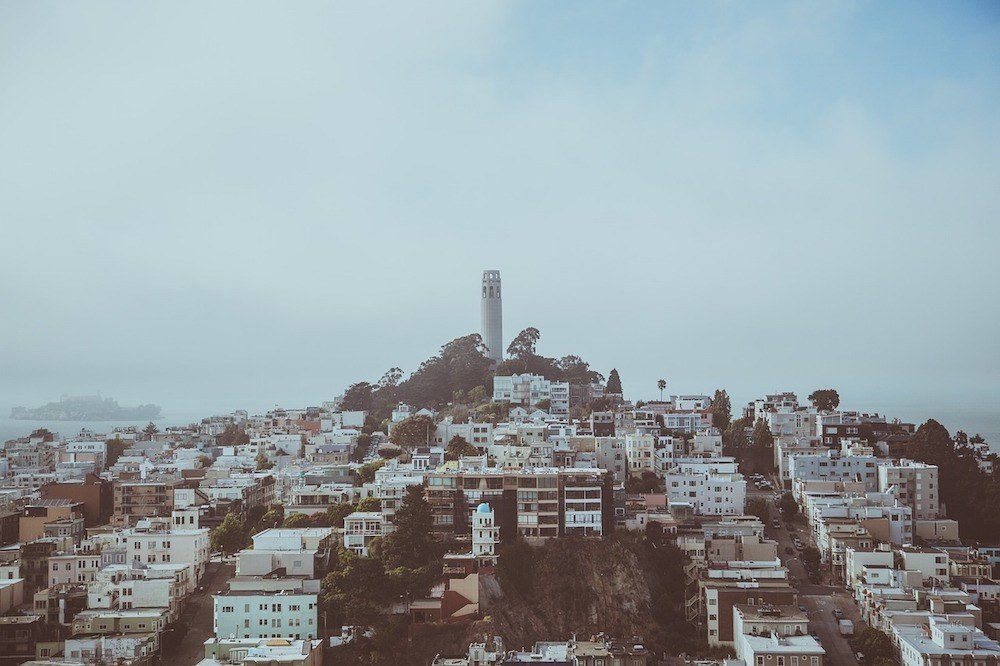 Where to Stay in San Francisco for 2 days

Ready to call it a day? Almost as diverse as the city itself are the accommodations you can find in San Francisco.

Live in the lap of luxury and stay at one of the many 5-star, luxury hotels in Nob Hill or Union Square; the Intercontinental Mark Hopkins, the Fairmont, or the Westin St. Francis are all great choices.

Something a little less spendy can actually be found most anywhere in the city. Union Square has more affordable options in addition to the swanky hotels and Fisherman’s Wharf is known more for its quirky boutique hotels.

For a true San Francisco experience though I would recommend checking out the Airbnb’s.

You might find yourself in a quintessential Victorian townhouse, a converted warehouse-turned-music-venue and communal living space, or a fancy penthouse apartment in the upscale Presidio district.

To be honest, it’s way cooler than any hotel you could book, especially since Airbnb actually started in San Francisco so the options here are endless.

Check out the latest prices and availability in San Francisco here 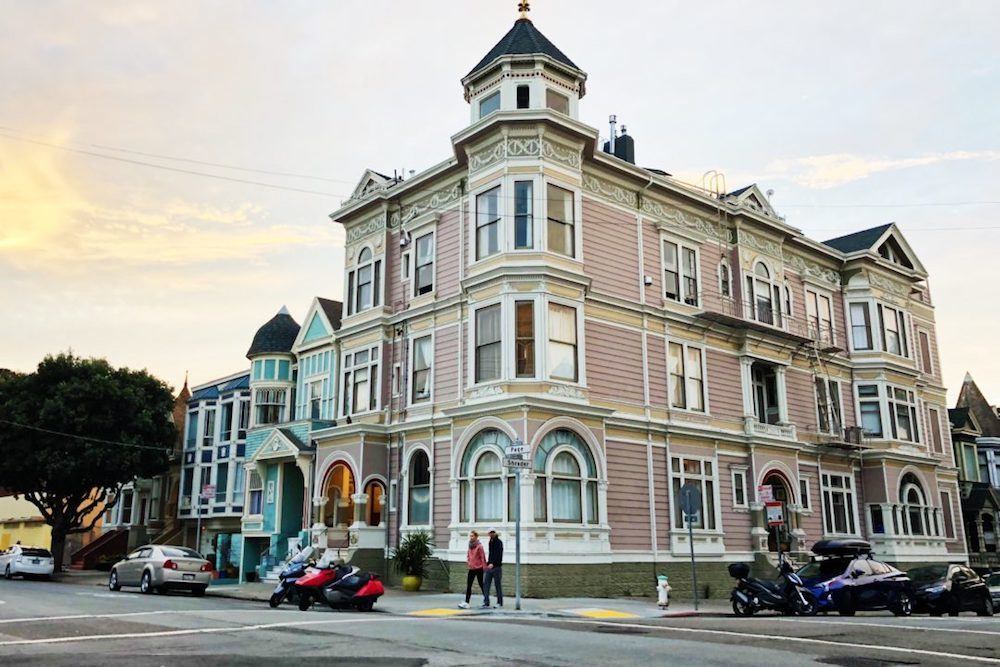 Thanks for reading! I hope this DIY itinerary helps make your trip to San Francisco a little smoother, more exciting, and more unique so you can explore the city like a local. Cheers and welcome to the City by the Bay!

Looking for more California inspiration or travel advice ? Don’t forget to also check out my bucket list post on the top 101 things to do in the Golden State and this San Francisco packing guide.

You’ll never run out of things to do in the Golden State.

Looking for more US travel tips? Check out these guides!

Enjoyed reading how to spend a weekend in San Francisco? Pin it! 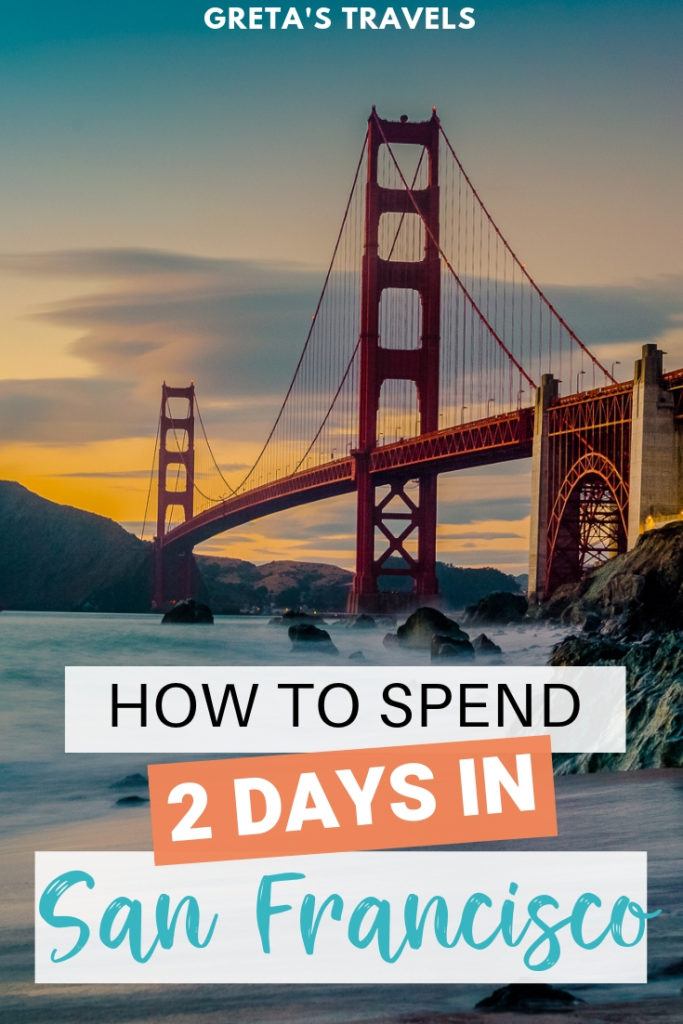 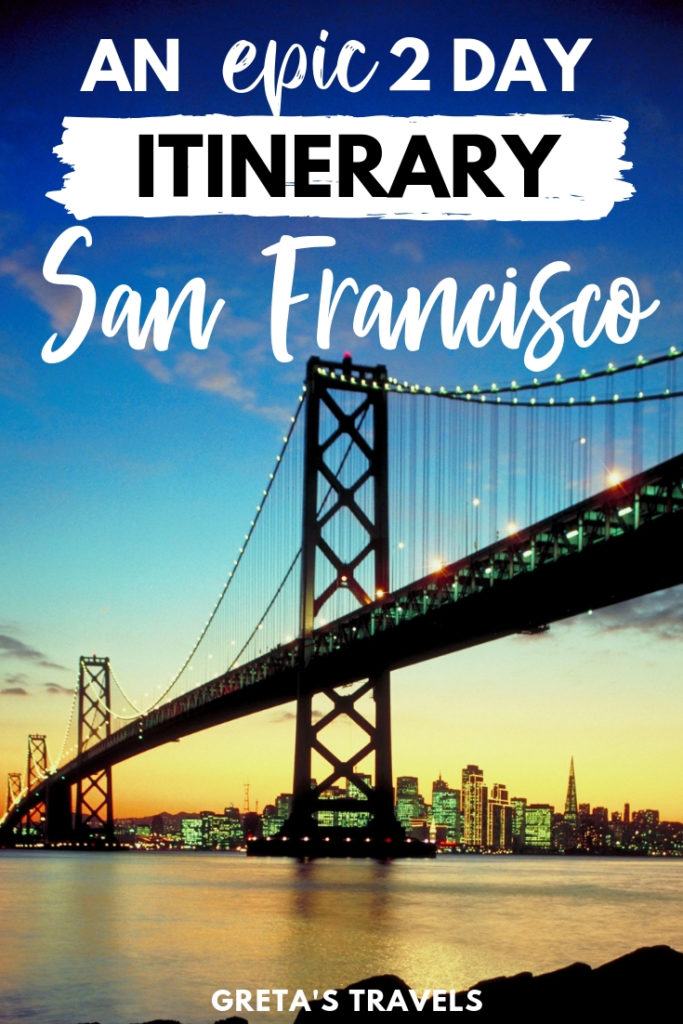 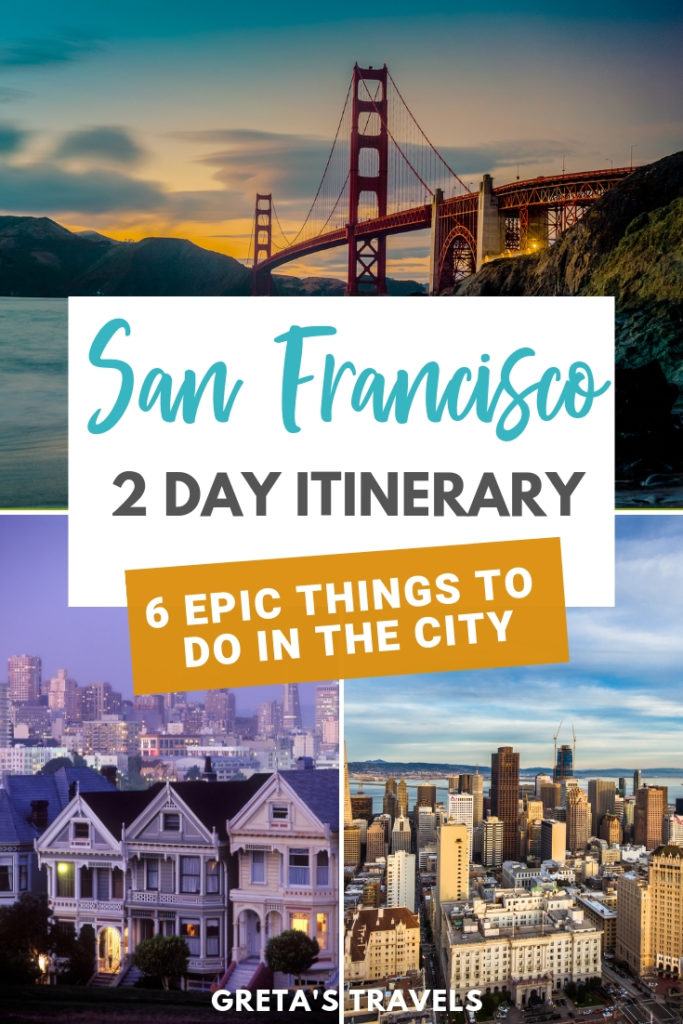 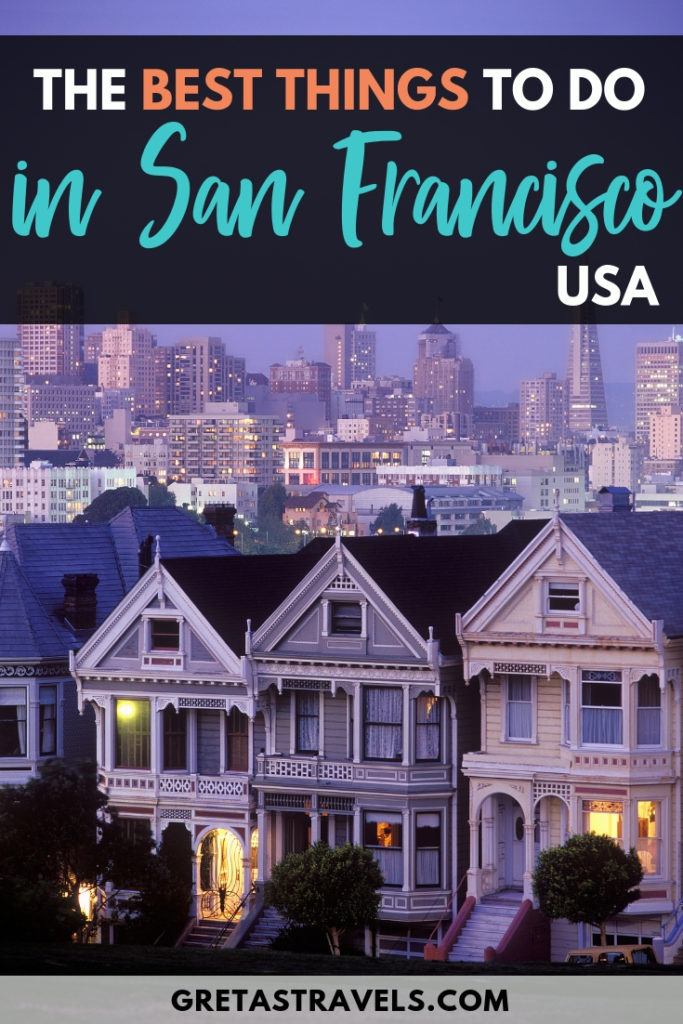 Mimi McFadden is a travel blogger and freelance writer. Originally from California, she has been slow traveling the world since 2013. When she’s not writing, you can probably find her sipping on a pint of craft beer, chasing waterfalls, or planning her next adventure in a foreign land. After living abroad for five years in Australia, New Zealand, Thailand, Greece, and Portugal she has finally found a home in San Francisco, California. 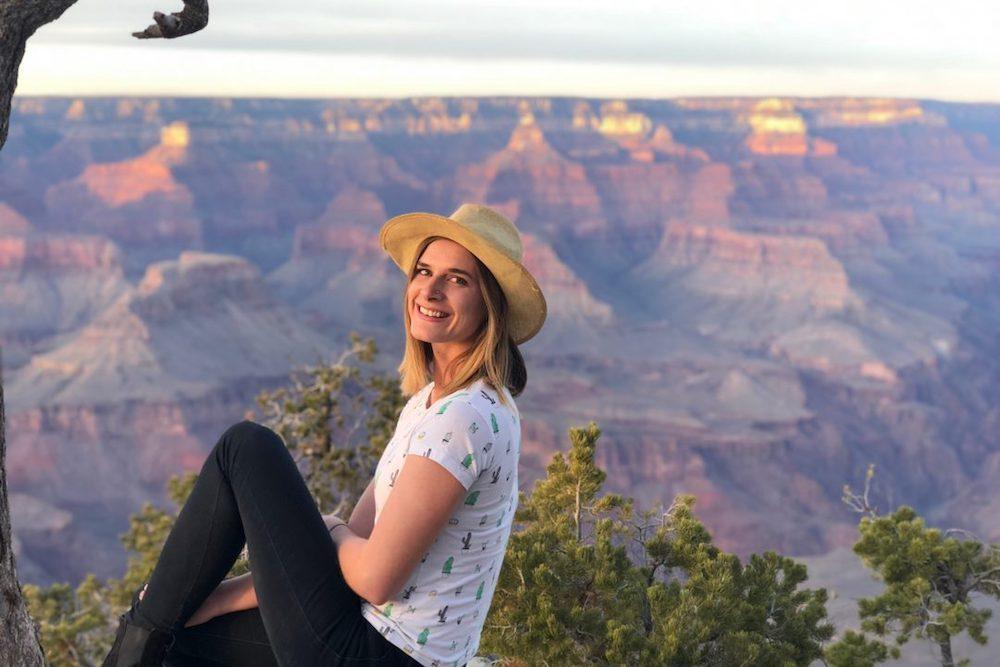 You've played out an awesome work. I'll unquestionably Digg it . It was most certainly instructive and the post is truly productive for me, keep up posting such posts.

Thank you for amazing insight, it was very helpful. I'll be spending just three days here and plan on tackling a lot of this blog. CHEERS!

Great 2 days itinerary and informative guide. Thanks for sharing. Travel to SF without any hassle using luggage storage services check out: https://vertoe.com/luggage-storage/san-francisco

Amazing article. Liked how you mentioned even the minutest of details. Thank you for sharing. Keep up the good work!