USA West Coast Road Trip: 6 Places To Visit In The West Coast Of The United States Of America

Let me set the scene: I’ve just returned from a 6-month stint in California and all I get from friends is the sarcastic quip, ‘Mate, did you go to California?’ YES MATE I DID.

Why were all my friends being annoying? Because I couldn’t stop talking about it; California truly is amazing. You can ski, surf, hike, swim and do it all in the same week.

Last year was a blast so I decided to return this year to see what I missed out on. So, here’s your ultimate road trip guide to the West Coast.

California’s pretty big so where do you start? There’s a bunch of different routes you could take to cover all the best places to visit on the West Coast, but here’s my top 3. 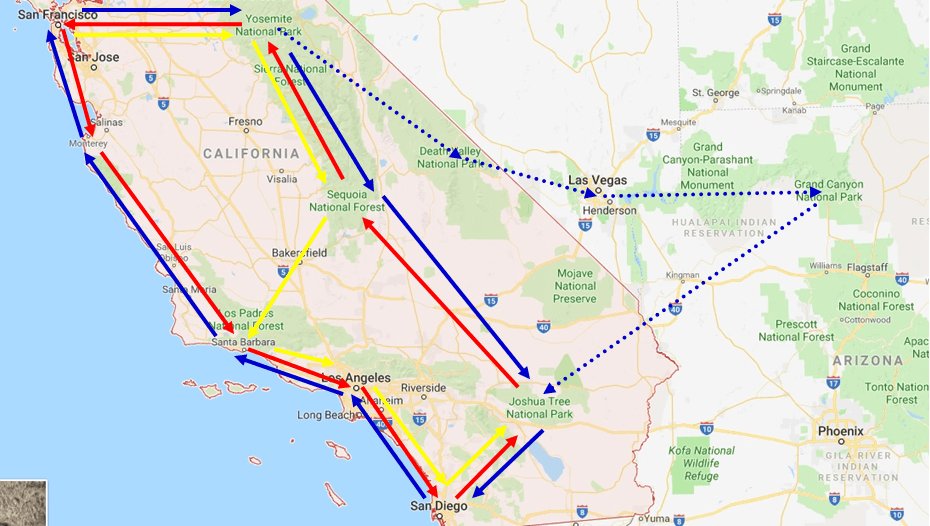 San Fran was weird. Boy it was so weird. The city has a kind of unique, relaxed energy that makes it addictive to stay in. Every corner has something and someone different.

Daytime San Fran is very different to night-time San Francisco and they both have a lot to offer. Ya girl can’t ride a bike so had to drive this bit but it is well worth renting a bike and cycling across the Golden Gate Bridge.

It’s definitely one for the bucket list and does not disappoint. Lots of places offer bike tours and it’s a great way to see the tourist attractions and get a base for your first day.

Whilst travel writers always promote walking as a sure fire way to get to know a city, why not try a boat taxi as an alternative? When I first read boat taxi I thought major ship, fifty seats but it’s actually a small, yellow boat like the size of a big dinghy.

Waves can be a little choppy but you’ll get to see the whole bay and stop off at popular places like Pier 39 to see the infamous sea lions who reside there.

It’s a hop-on/hop- off type thing with a flat rate of 10 USD per person. If you ask nicely enough, you might even get to drive the boat.

If you’re after a more ‘authentic vibe’ walk up some hills and check out Mission Dolores Park. San Francisco is known for its liberal, hippie counterculture of the 60s. In the park you’ll find people playing the bongos, walking on tight ropes and smoking weed.

Top tip: Return your rental car to the same place that you picked it up so you don’t get hit with extra fees. 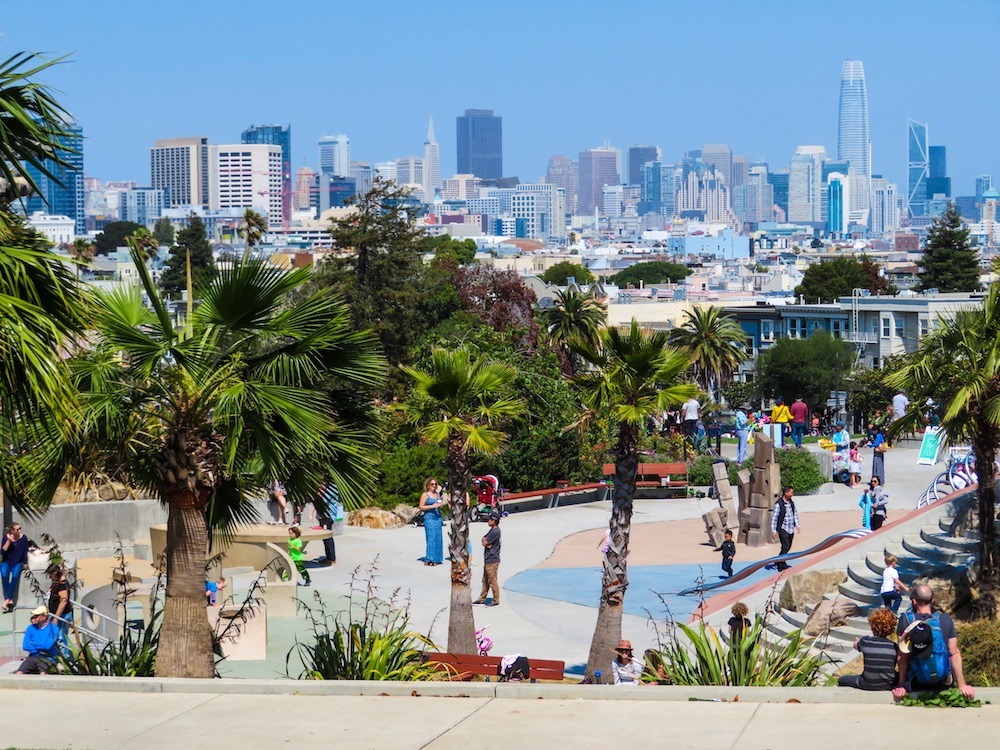 Santa Barbara is the next major city on the coast but if you want you could stop by Monterey on the way down; it’s famous for its aquarium and the bay’s rock formations.

As for Santa Barbara, it hasn’t got much that the rest of California can’t offer you but if you’re after the image of a ‘typical’ Californian lifestyle you’ll find the embodiment of that in Santa Barbara. The city is known for its party school along with its serene beaches and great seafood.

Top tip: On your way down to the next location, take the slightly longer route down Pacific Coast Highway so you get views of the ocean all the way down. 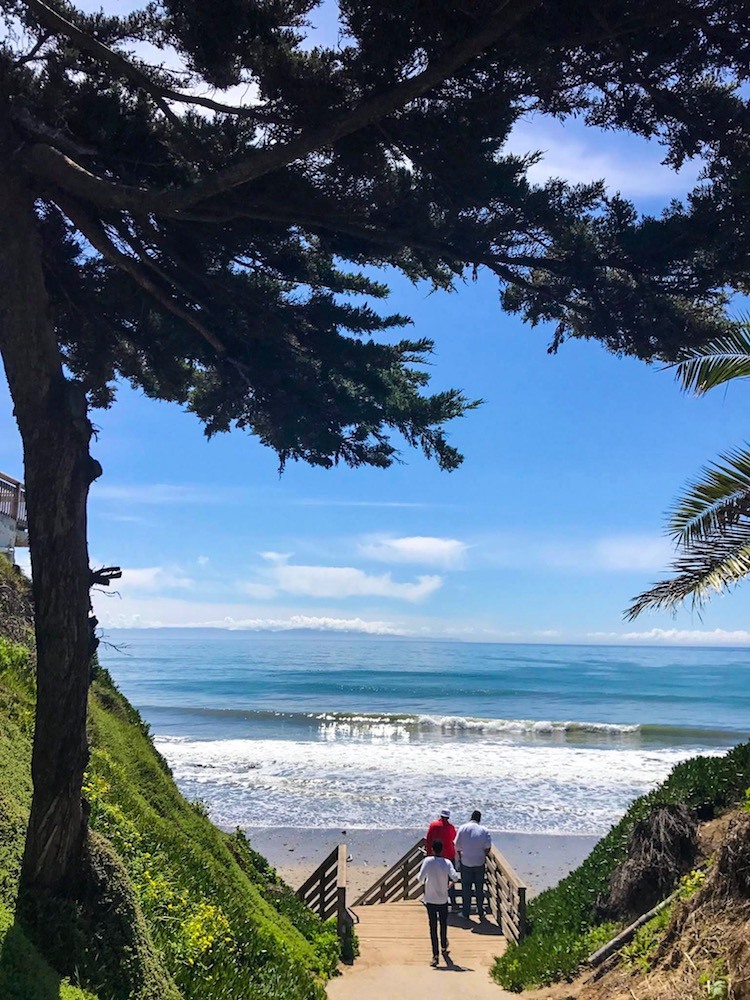 Los Angeles is a monster of a city. The traffic is no myth but suck it up. Unfortunately, there is no easier way than to drive in L.A. because of its vast expanse.

There is SO much to do in L.A. but the peak for me was a literal peak. The Hollywood sign is a must see but why not see it whilst getting a great view of the whole city?

Careful with this one though, we spent ages driving around the Hollywood hills looking for the trails. Plan which route you want to take. For the most rewarding hike take the Brush Canyon Trail.

If you don’t fancy a 6.4 mile hike you can always drive up part way, find somewhere to park and walk the remainder up Mount Lee. L.A. and the surrounding areas of Malibu and Long Beach are known for their beaches. Kick back and relax on Venice or Manhattan Beach. Perfect time? 10am on a Tuesday.

L.A. has a lot of neighbourhoods but if you’re after ‘edgy’ fun then go to Korea Town. You’ll indulge in some of the best Korean food you’ve ever tasted as well as treating your ear buds to dulcet tones in a karaoke bar.

BUT, if you’re looking for something more off the grid try Break Room 86. I won’t ruin it for you but it’s a speakeasy with hidden doorways in the most unexpected places; retro decor in the cool way, not the try-hard way.

Top tip: If you’re single, get on a dating app and ask for recommendations for local hot spots but just be careful they don’t follow you to the location…

If you’re not single, anytime you get in an Uber ask for recommendations, they ALWAYS know. 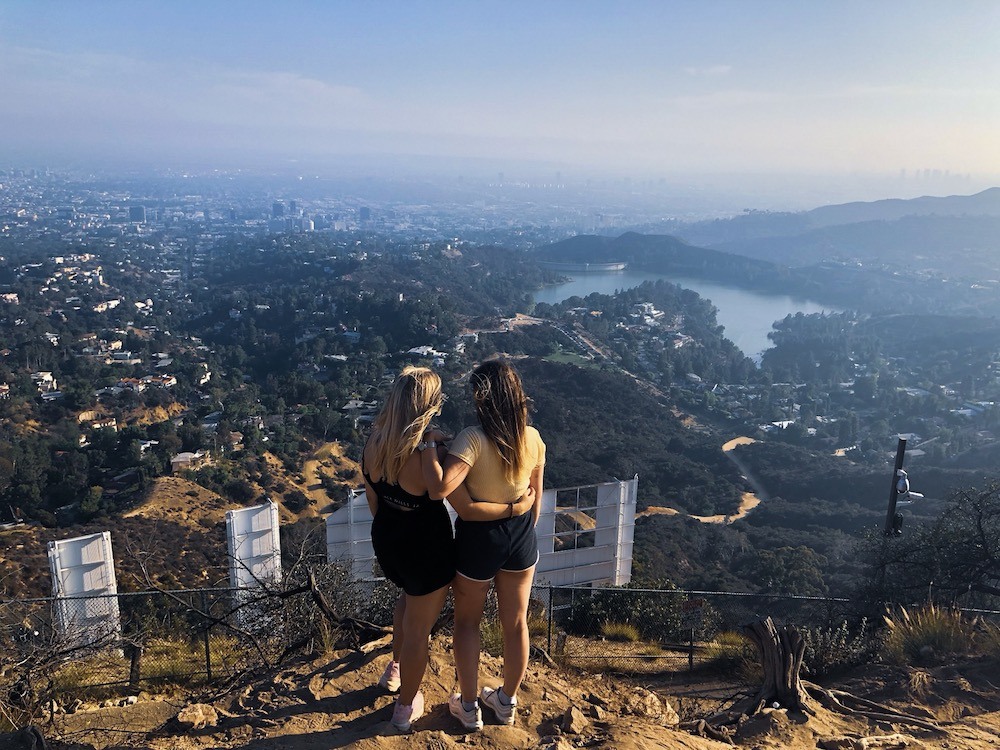 The view over Los Angeles from behind the Hollywood sign, photo by Just Jenny Lamb

San Diego is known for its miles and miles of white sand beaches, so make the most of it. La Jolla Cove is a small, picturesque beach enclosed by the cliffs. La Jolla has a rich marine life making it a popular destination for snorkelers. It gets quite busy but make sure you stay for sunset.

Ok, so you’re reading the word park up there in my top 3 and you’re wondering why would I go all the way to California to sit in a park? Balboa is no ordinary park.

There’s museums, performances, shopping, art and the world famous San Diego Zoo. The zoo is home to over 3,700 different animals.

After a day of exploring everything the park has to offer, take a night-time stroll through the Gaslamp Quarter. Tucked into 16.5 blocks, the quarter is packed with restaurants and bars where you can have fun as you immerse yourself in Victorian architecture.

Top tip: As with any major city there can be problems with homelessness. Be careful with Airbnb as I ended up staying in a homeless heavy district. 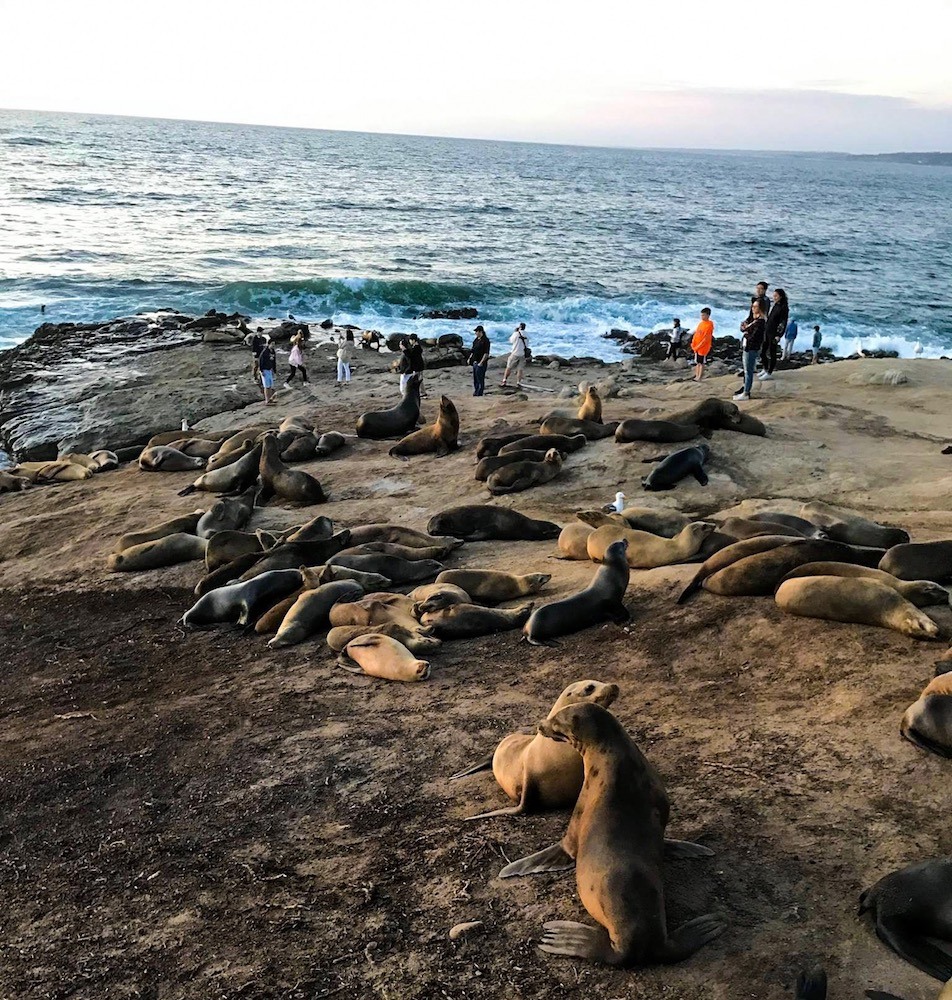 If there’s one thing you know about Joshua Tree it’s either that they are famous for their weird looking trees or that it’s the place people go to ‘get away’ and ‘be at one’ in the desert.

Whichever one you’re after make sure you check out the National Park. You drive to the different viewing spots because the heat is simply unbearable in the summer.

Joshua Tree is in the middle of nowhere so what is there possibly to do in the evening? Go to a drive-in movie theatre.

There aren’t many left in the US which is why Smith’s Ranch in the neighbouring town of Twenty-Nine Palms is perfect. Just remember to take 5 USD cash as they don’t accept card.

After the movie, if you’re in the mood for a drink then head over to Pappy and Harriet’s Pioneertown Palace. Expect BBQ food, live music and drinks in mason jars.

Top tip: When you enter the national park, make sure you buy an annual park pass as it works out cheaper for you if you want to visit other national parks in the country.

I’ve combined these into two because you could theoretically drive through one and stay in the other. Sequoia comes first and if you’re interested in big trees then WOW, you’re in heaven. Sequoia and King’s Canyon National Park are right next to one another so you can smash them out in a day.

Though, the most impressive landscape I’ve ever seen has to be in the next national park along the route, Yosemite. For those who don’t know, Yosemite is home to the tallest waterfall in America and around 300-500 black bears.

3.5 million people visit every year to witness its magnificent landscape. Still don’t know what I’m talking about? You know that massive rock on the default background of a Mac? Yeah, that big boy.

There are numerous hikes you can do but always check with the park rangers to find one suitable for your ability. Glacier Point is by far the best viewing point but Nevada Falls is also impressive.

Glacier Point is also accessible by car so if you feel you can’t do a 4.8 mile hike with an elevation of 3,200 feet then consider driving. However, you’ll miss out on plenty of stop-offs for pictures on the hike.

Lastly, experience something LOCAL. Stepping into central California is how you might imagine stepping into the South of North America is like. Thick, lazy accents and ‘cowboy feels’, pick-up trucks everywhere and American flags.

Top tip: If you want to witness the impressive waterfalls in the parks go in the spring as there is no water in the valley during the summer and many paths are closed in the winter. 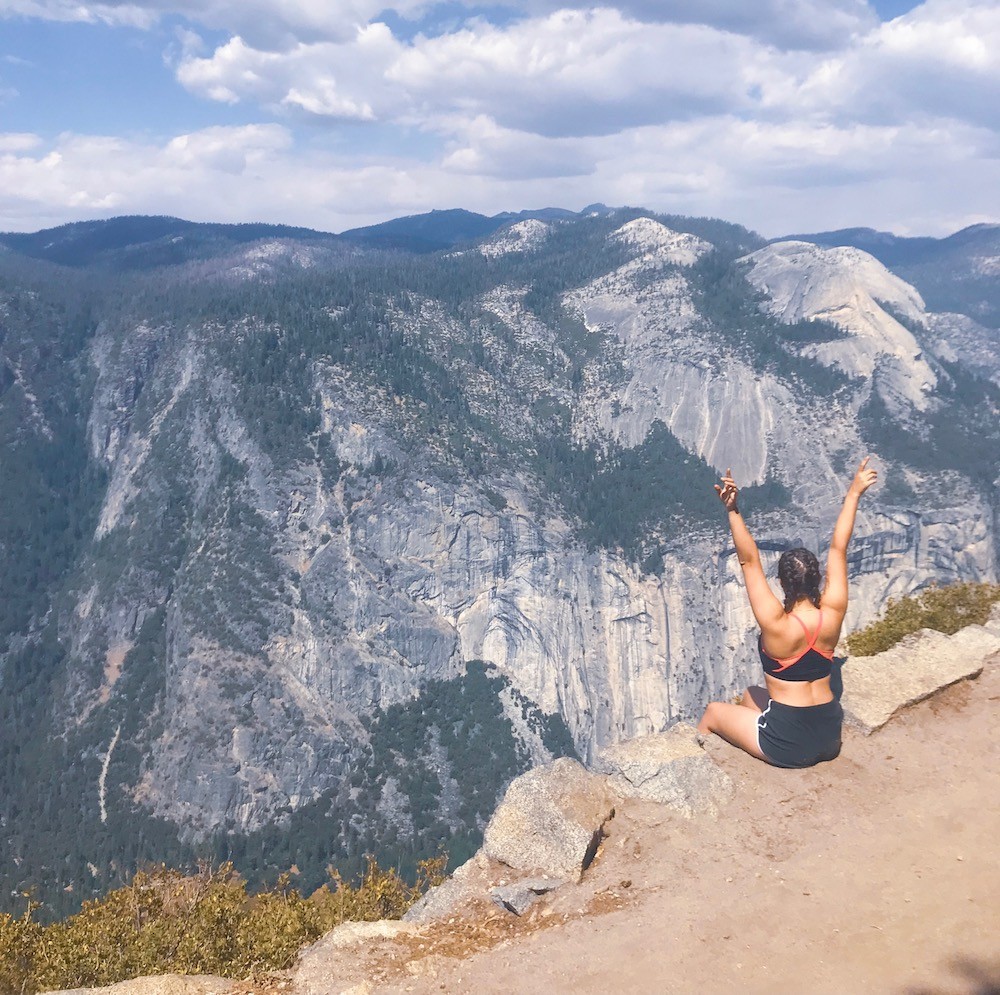 So, there you have it: my ultimate guide to a USA West Coast road trip.

If you’re feeling adventurous and want to extend your trip then you can see even more in the neighbouring states by going through Death Valley to Vegas to the Hoover Dam and finishing in the Grand Canyon.

As always let me know where your travels take you! 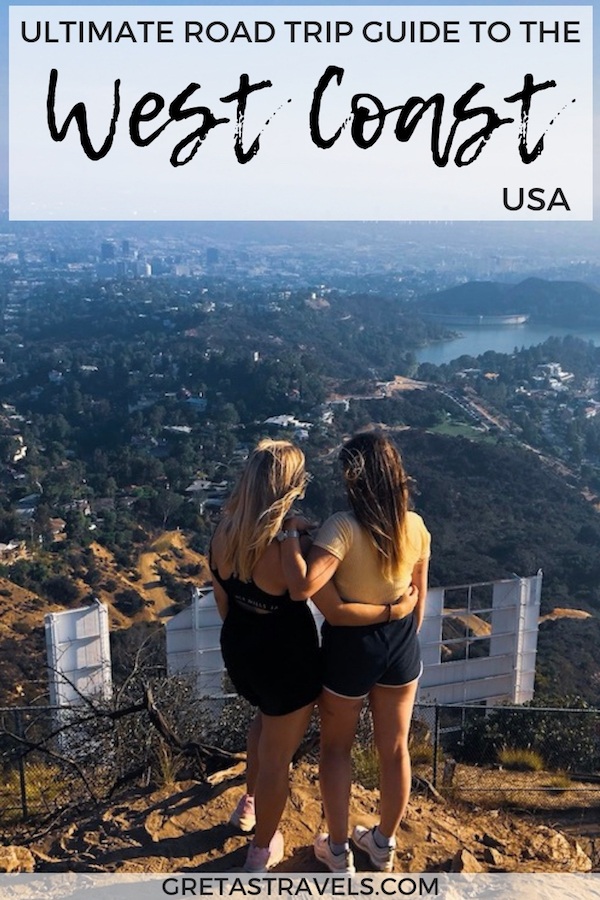 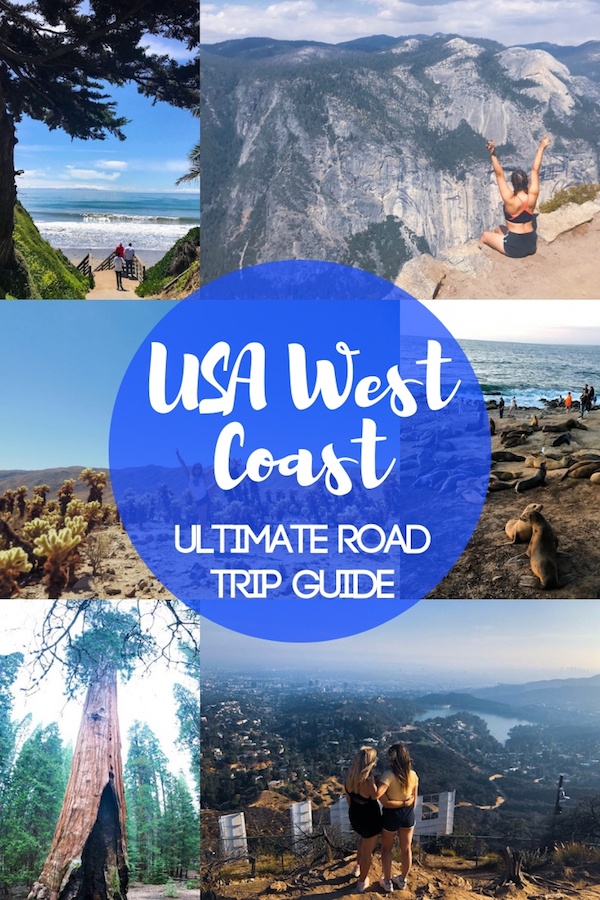 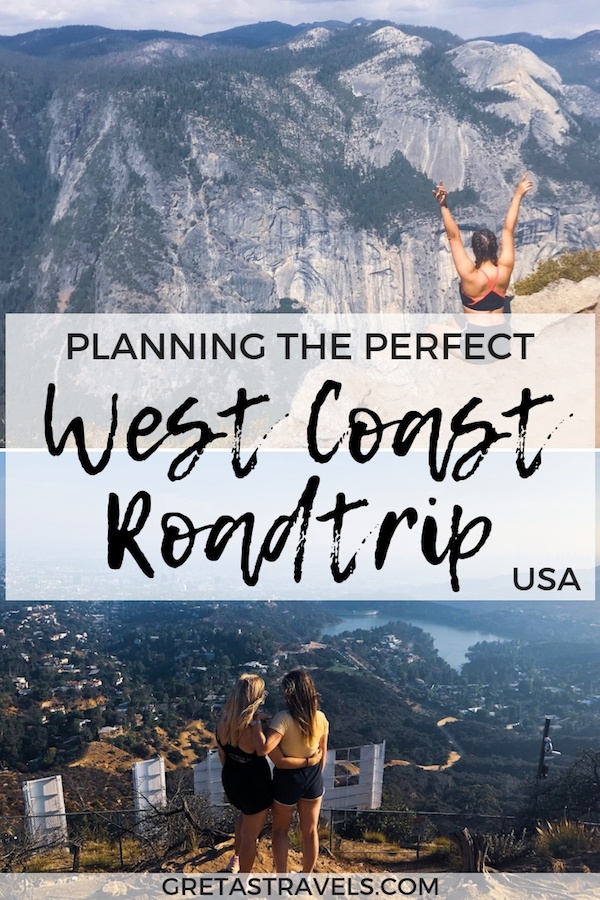 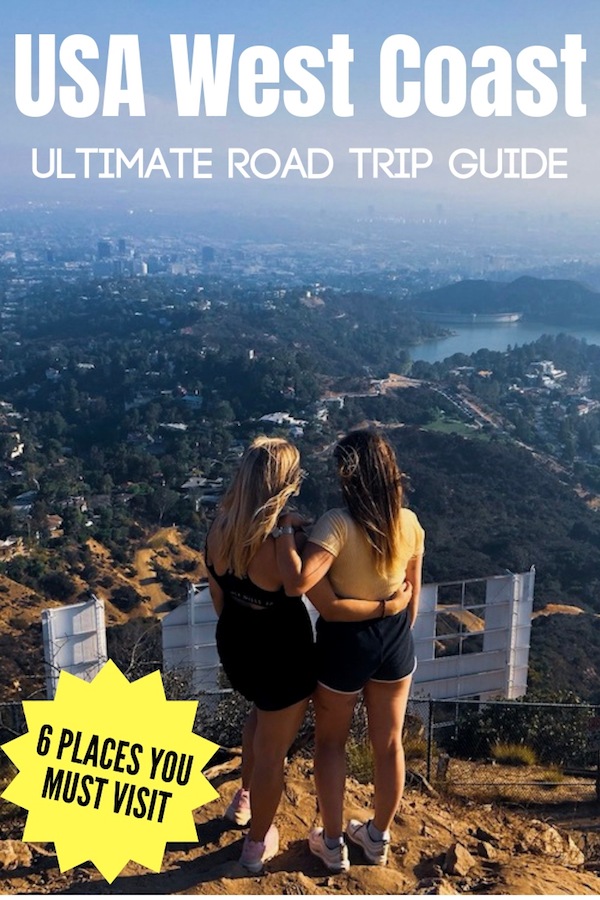 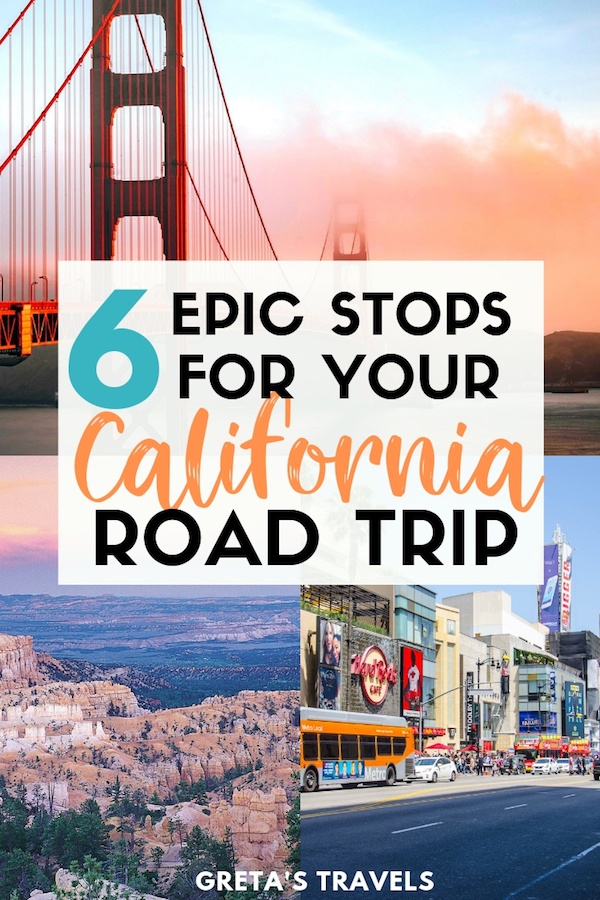 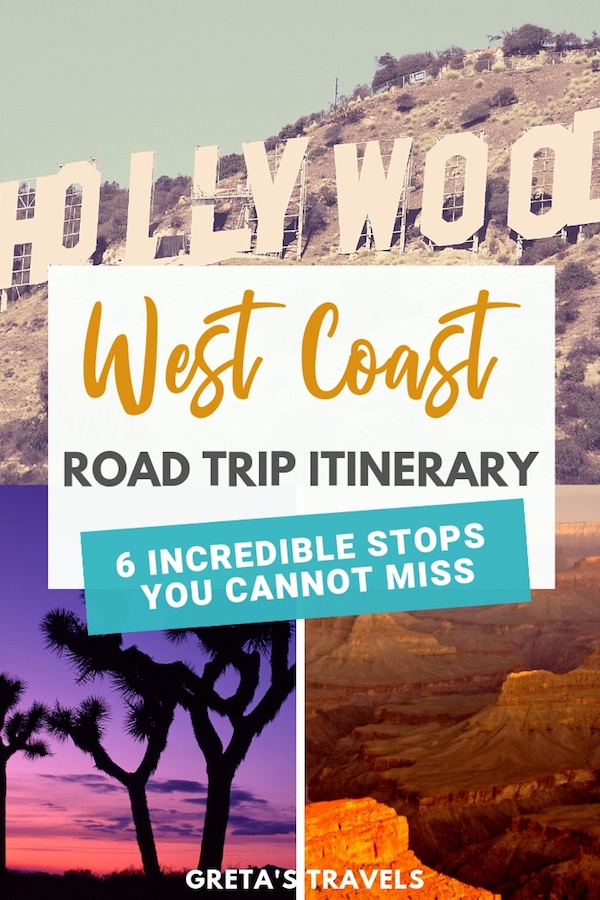 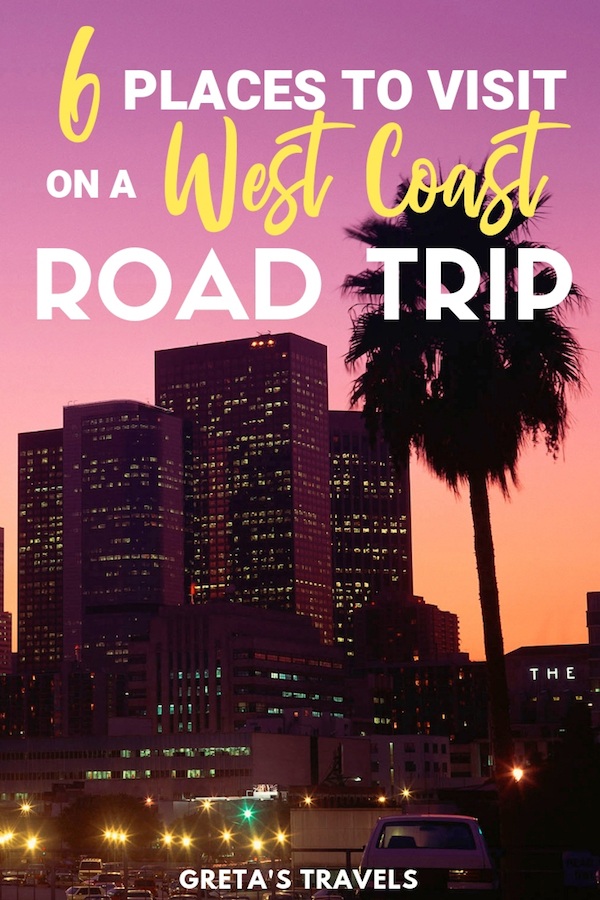 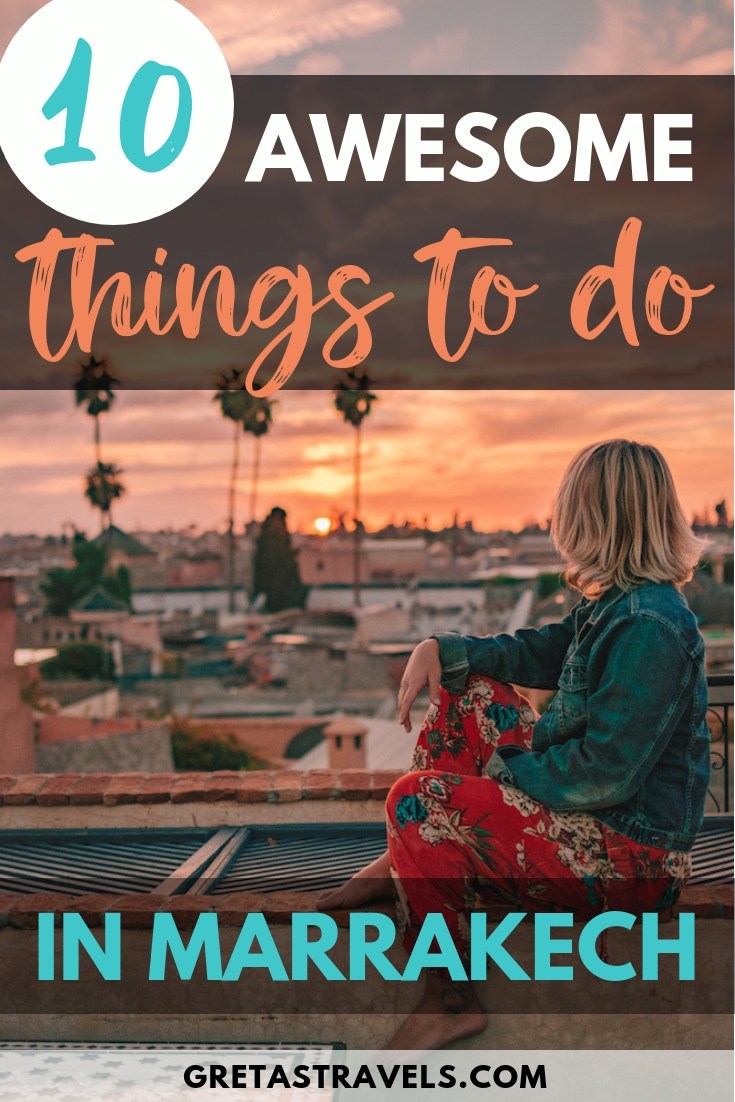 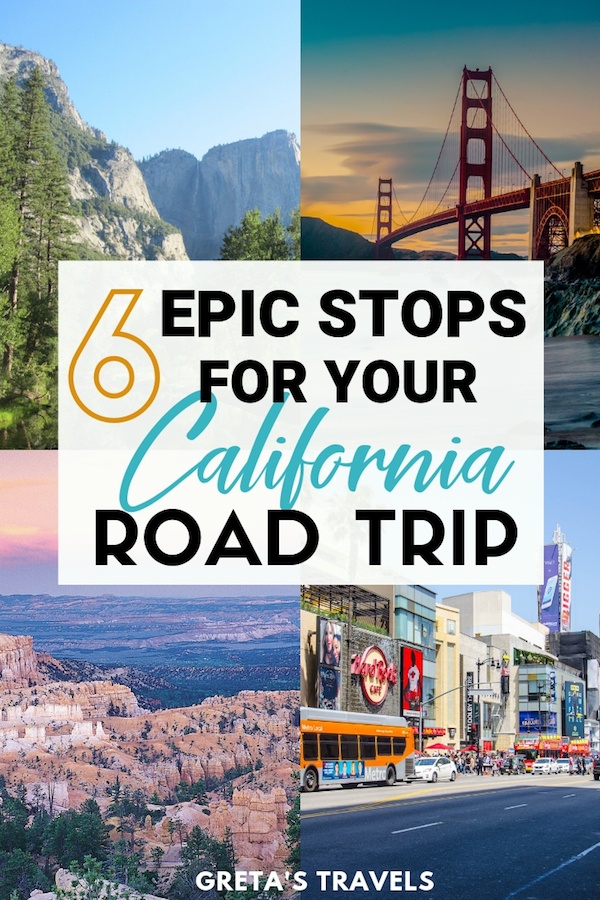 Jenny is a 21-year-old writer from London who recently decided to escape real life and travel the world for the next year. Fed up with ghost writing about mundane topics for other people she created her blog, JustJennyLamb in the hope of creating a ‘non-pretentious’ and relatable travel blog. Expect a brutally honest version of events, a lot of sarcasm and some witty prose. If you’re looking for a light bed-time read, you’re in luck. 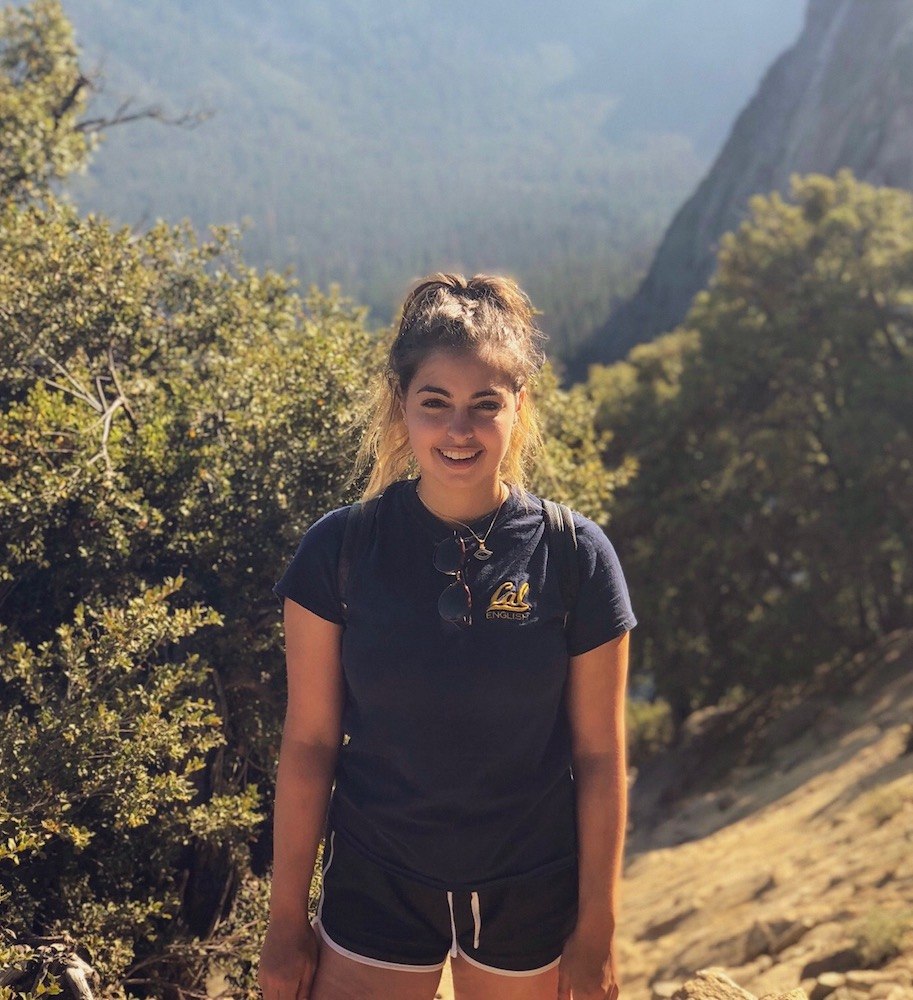