A hidden gem in California, and often referred to as “America’s Riviera”, Santa Barbara lies between Los Angeles and San Francisco and is at times overlooked by the two cities.

Santa Barbara is a quintessential beach town, packed with outdoor activities and brimming with wine tasting rooms and restaurants spread out around town.

Sandwiched between the San Ynez Mountains and the Pacific Ocean, Santa Barbara is an ideal vacation for people of all ages.

This 2-day Santa Barbara itinerary will give you a feel for the town and allow you to maximize your 48-hours there.  You’ll be guided on how to get around, where to stay, and activities to do while visiting. 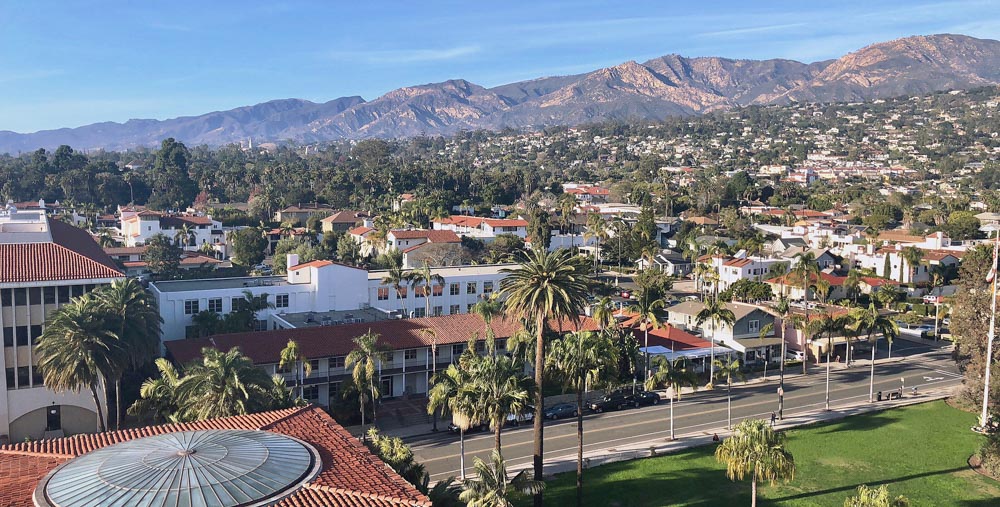 Some key travel info for 2 days in Santa Barbara

How to get to Santa Barbara

Once you’ve landed at the airport you can easily catch an Uber or Lyft to get to town, with the drive taking only about 20-minutes. However, because the Santa Barbara Airport is small, it’s also expensive.

If you’re looking to save money you can fly into Los Angeles (LAX), and rent a car or take a bus.

You can rent a car from LAX directly and drive up the 101 to Santa Barbara. Without traffic, this drive will take about an hour and a half.

If instead, you don’t want to deal with the hassle of a car, you can opt to take a bus. The Santa Barbara Airbus drops you off near downtown Santa Barbara and costs $55 for a one-way trip or $100 roundtrip.

Getting around Santa Barbara

Once you’ve arrived in town, getting around Santa Barbara is the easy part! An easily walkable city, most of Santa Barbara can be accessed on foot.

Otherwise, you can easily get an Uber or Lyft or rent a bike. Bike rentals are available at Wheel Fun Rentals.

If you plan on doing day trips from Santa Barbara I’d recommend renting a car from the airport when you arrive, so that you have maximum flexibility. 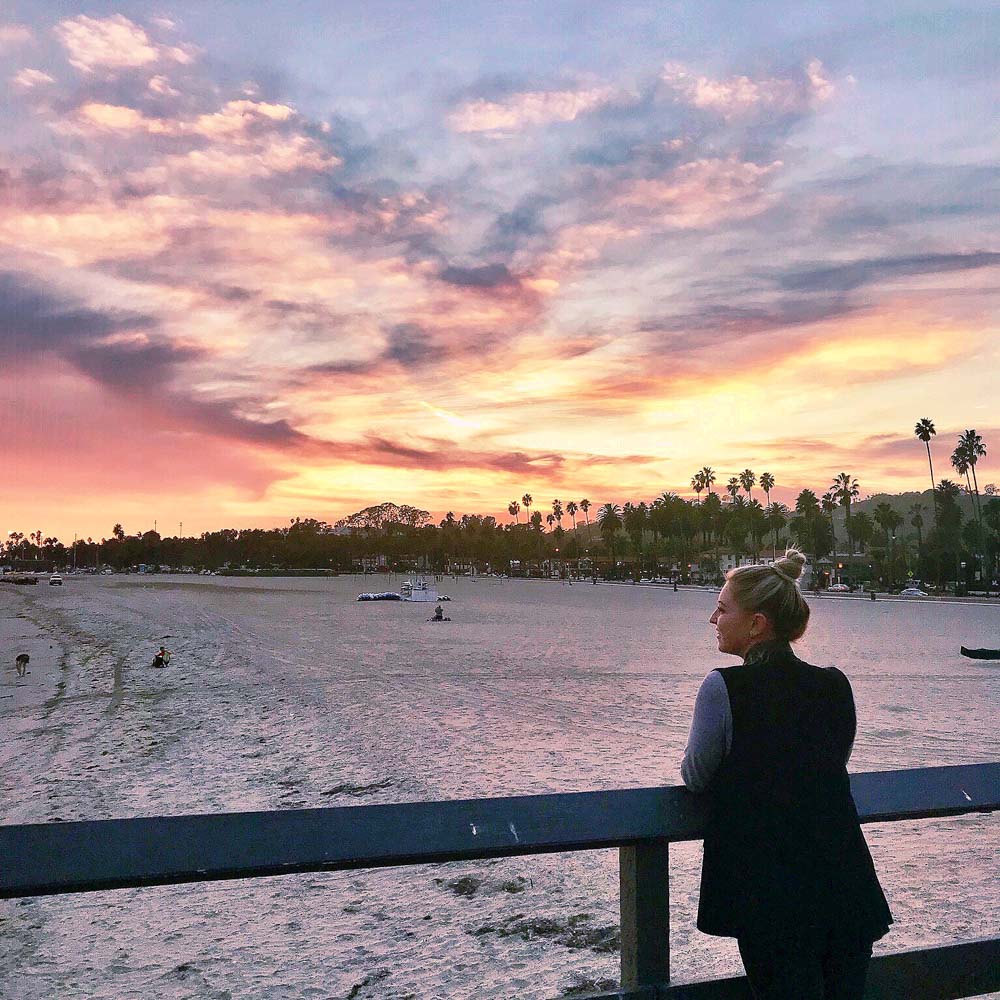 Sunset in Santa Barbara – photo by Passports and Preemies

Where to stay for 2 days in Santa Barbara

For a short 2-day trip to Santa Barbara, I’d recommend staying on or near State Street, so that everything is easily accessible. You will find lots of cool hotels, hostels and AirBnbs in Santa Barbara.

If your budget allows, I’d recommend the five-star hotel, Hotel Californian. It’s located between State Street and the Funk Zone and happens to be walking distance to the ocean.

Click here to book your stay at Hotel Californian!

For a more budget-friendly option, opt for Best Western Beachside Inn. Like Hotel Californian, this hotel also has a pool and is in the middle of all that Santa Barbara has to offer. 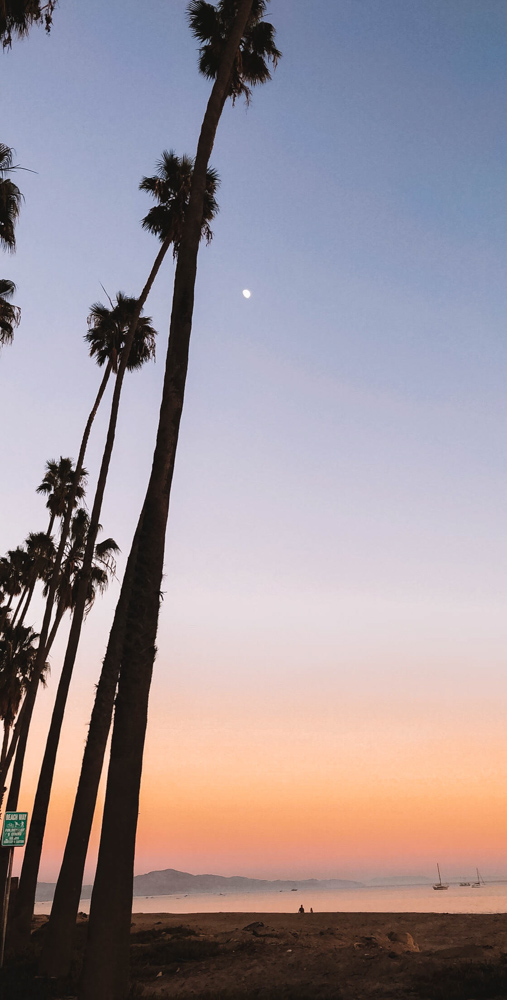 On your first day in Santa Barbara, get to know the ins and outs of this quaint town as you explore both tourist and non-tourist activities and attractions.

On your first day in Santa Barbara, discover the beauty of the town as you begin your day on State Street. State Street is the main street in town with boutiques, restaurants, and bars lining the street.

Start at the north end of State Street and walk towards Stearns Wharf. As you make your way down the street keep an eye out for McConnell’s Fine Ice Cream, ice cream made from scratch.

For a healthier, bust just as tasty option, instead, stop at Blenders in the Grass. Blenders is a plant-based, dairy-free, gluten-free, juice bar. 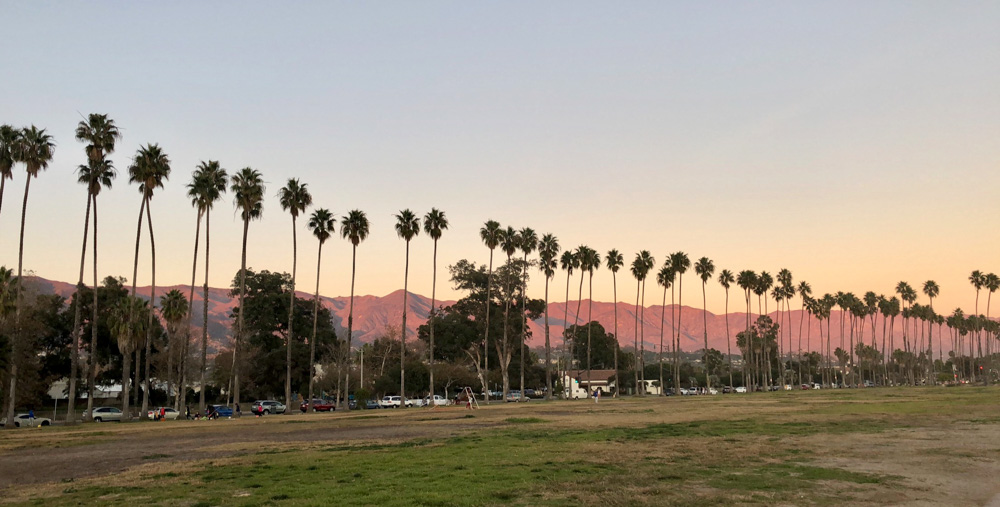 As you continue down State Street you’ll come to Stearns Wharf, stretching out over the Pacific Ocean.

It’s located on the second story of the Wharf with an outdoor patio looking out over the Pacific. 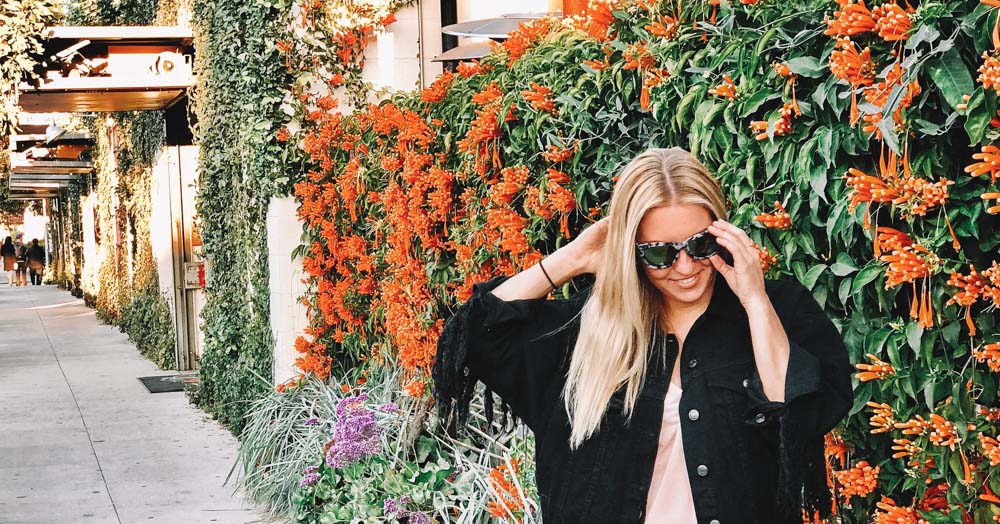 From Stearns Wharf walk about a half a mile back towards town until you get to Santa Barbara’s Funk Zone. The Funk Zone is what is known as the “hipster” neighbourhood of Santa Babara.

It’s a recently renovated part of town that has brought new businesses to Santa Barbara. The Funk Zone is widely known for its wine tasting rooms but has an array of fun bars, restaurants, and boutiques to shop at. 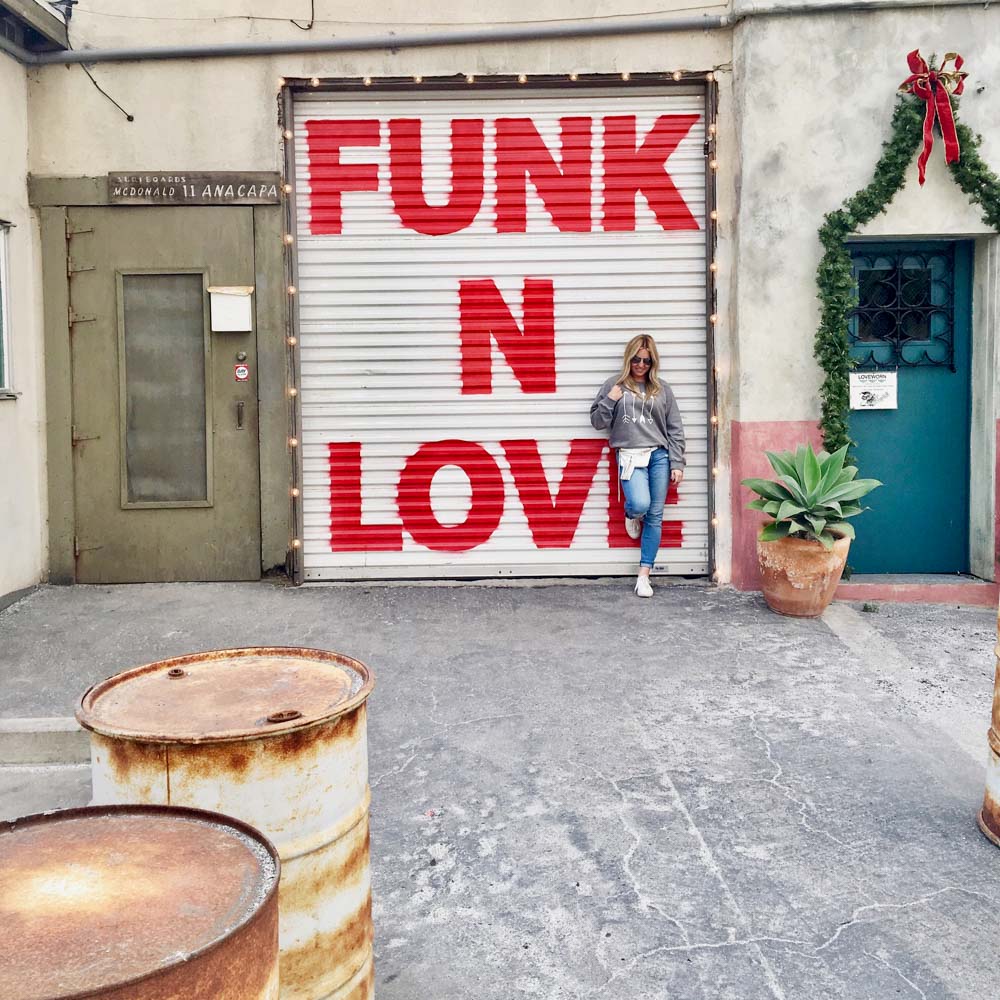 Funk Zone in Santa Barbara – photo by Passports and Preemies

Once you’ve walked around Santa Barbara, hop in the car and drive 10-minutes out to Arroyo Burro Beach. (The beach is only 3.5-miles from the Funk Zone if you’d rather walk).

Make sure to take your swimsuit and towels, Arroyo Burro Beach is dog friendly and oftentimes has surfers and people playing in the water.

Stay around for a while to watch the sunset or have drinks outside on the patio of The Boathouse. 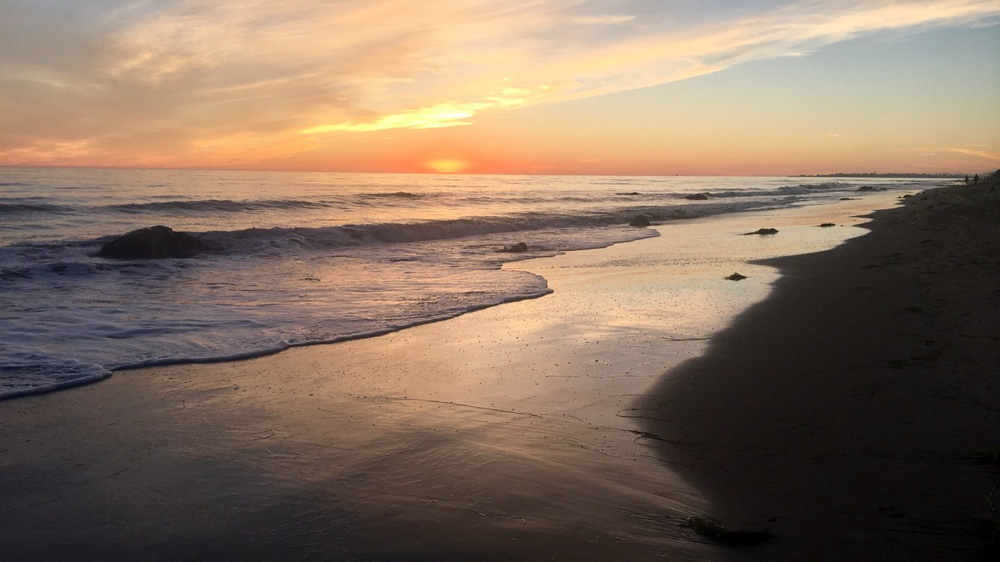 Sunset in Arroyo Beach – photo by Passports and Preemies

It’s here where celebrities such as Oprah have houses and as you cruise through Montecito’s main street, Coast Village Road, you may see a celebrity or two walking down the street.

While you can drive to Montecito, I recommend taking an electric buggie.  You can rent a buggie from SB Buggie and drive along Butterfly Beach until you reach Montecito.

While you’re on Coast Village Road, pop into Jeannine’s Restaurant and Bakery for breakfast. 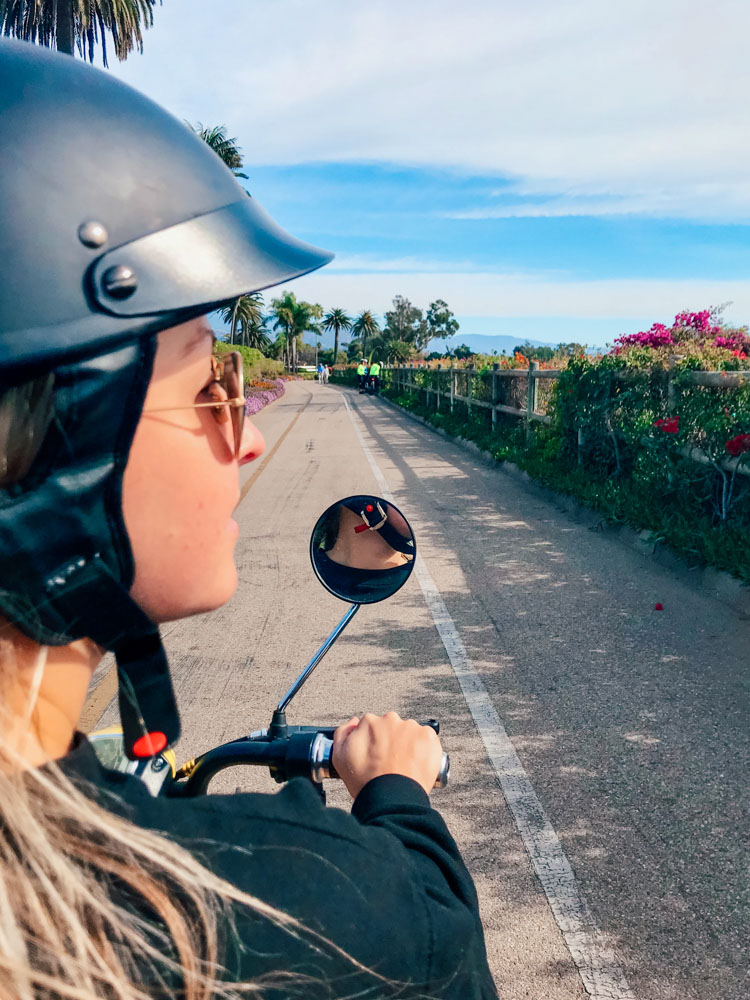 Scootering around Santa Barbara – photo by Passports and Preemies

Once you’ve returned your buggy in Santa Barbara, hop in the car and make your way 35-miles north to the vineyards of Los Olivos.

Los Olivos is located in the San Ynez Valley where the town motto is, “Where every weekend is wine-fest”! Los Olivos is home to vineyards and 30+ tasting rooms. 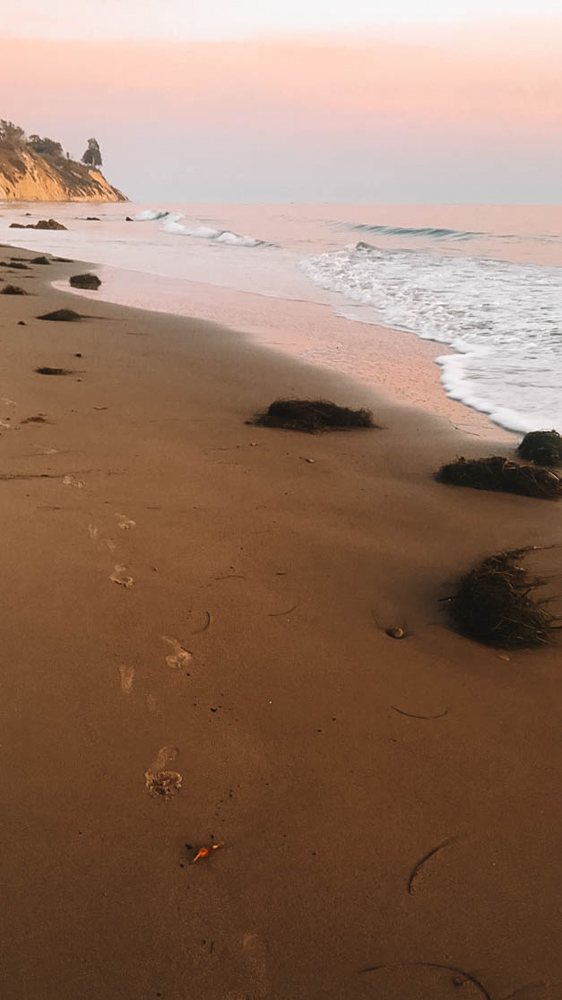 Sunset in Arroyo Beach – photo by Passports and Preemies

Once you’ve explored the surrounding areas of Santa Barbara, head back to town for dinner.

If you’re interested in seafood, head to Brophy Bros for fresh fish and oysters. For a complete list of food options around Santa Barbara, check out this guide.

On your last night in town explore the nightlife as you head out for some fun and cocktails before leaving. For cocktails head to State Street and splurge at The Good Lion, a swanky neighbourhood bar.

For a more lively scene stay on State Street but instead head to the Red Piano for live music and dancing. 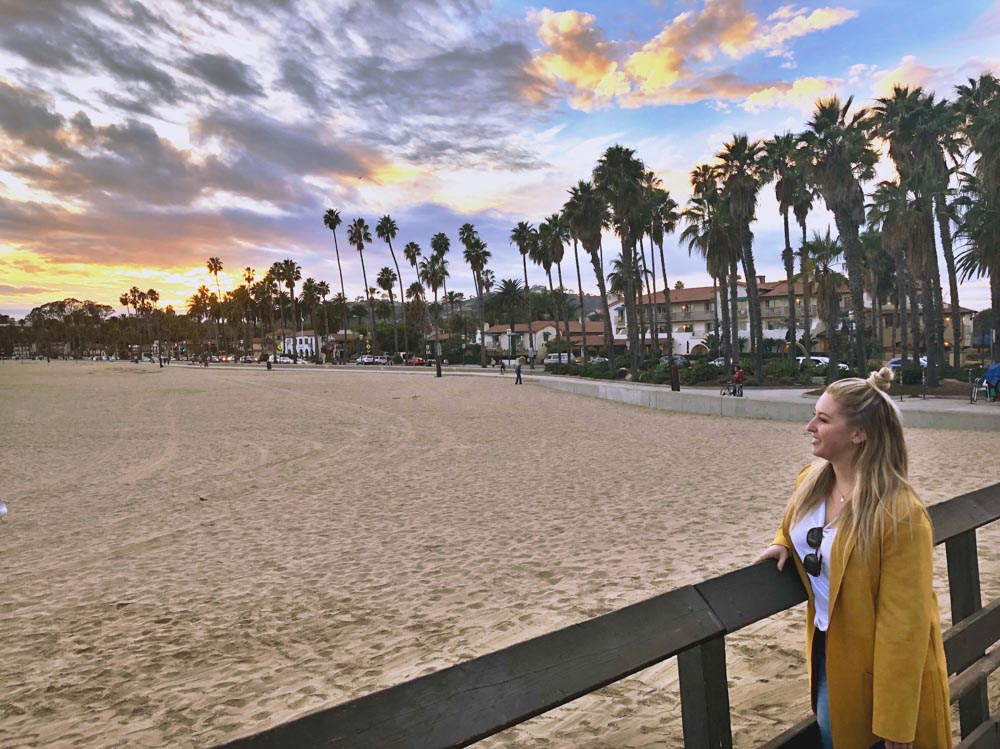 Sunset in Santa Barbara – photo by Passports and Preemies

While Santa Barbara is a relatively small town, spending two days will allow you to see the beauty and fun of this town.

And while California typically draws people in for the fame of Los Angeles, the laid back beaches of San Diego, and the tech-city of San Francisco; Santa Barbara should not be overlooked.

It’s California’s best-kept secret, and secretly… I hope it stays that way.

Looking for more US travel tips? Check out these guides! 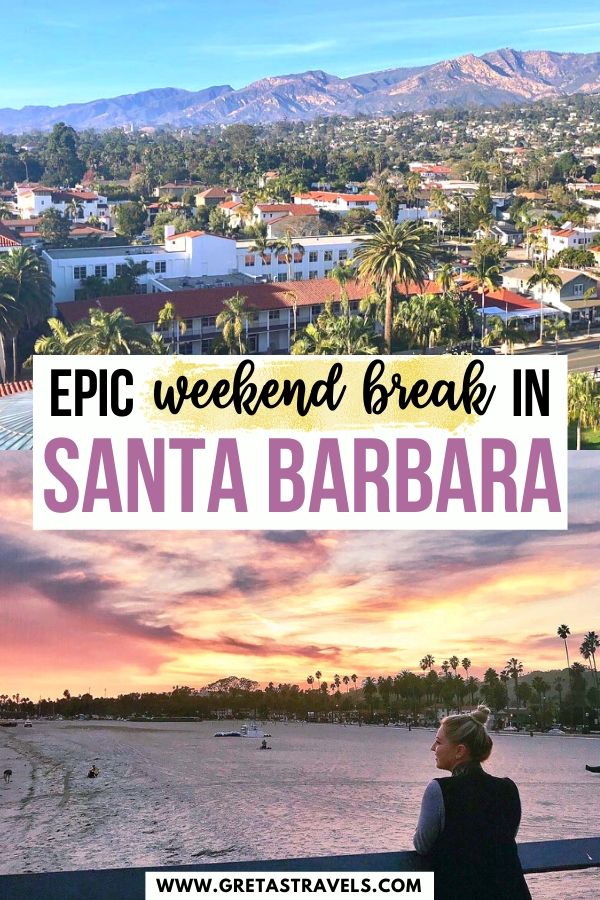 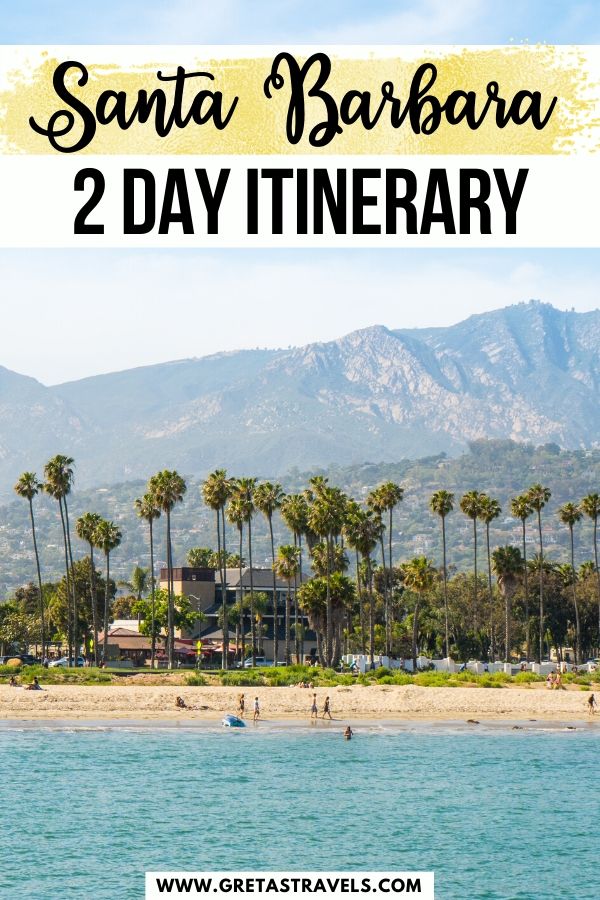 Kylee is a traveling Neonatal Intensive Care Nurse and an avid solo traveler. She has spent 5 years caring for premature and sick babies in the NICU and has been a travel nurse for 3 of those years. Kylee began Passports and Preemies in 2017 while volunteering as a nurse in Skopje, Macedonia as a way to reach nurses and advocate for the prevention of nurse burnout by traveling. Since 2017 Kylee has made it a goal to go on one extended solo trip per year lasting 8+ weeks. Kylee is the original creator of the “8 Day Vacay” – A vacation geared towards nurses aiming to take advantage of the potentially 8 days off between work weeks with no need to use PTO. 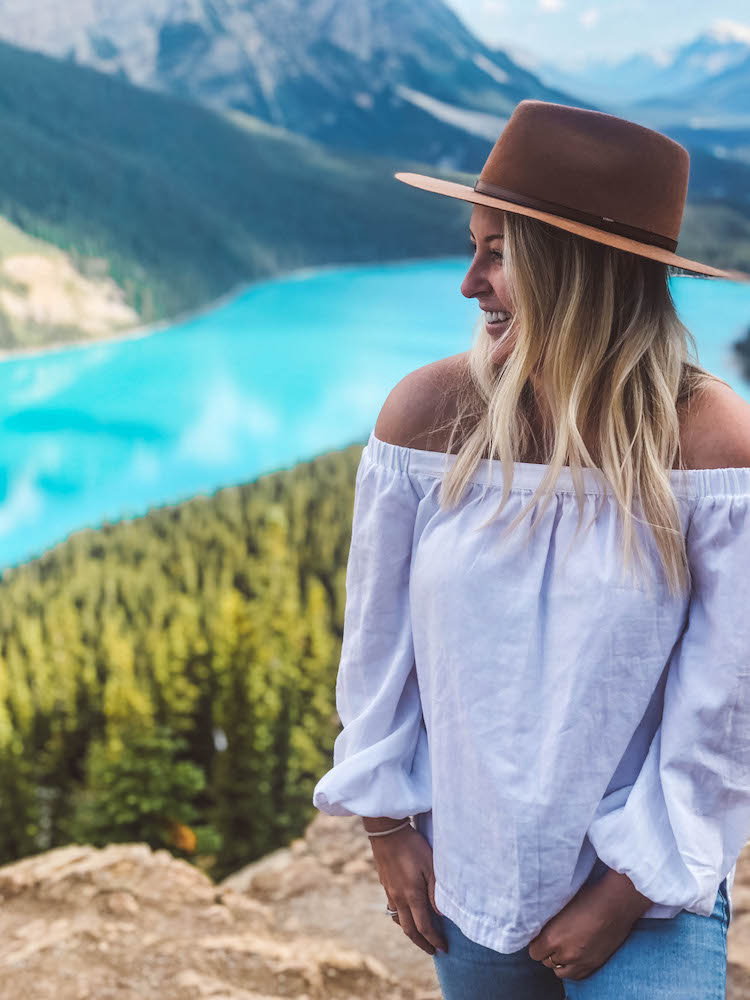 Living around Santa Barbara for the past 27 Years, I would say this is a pretty accurate account of places I would recommend. I would explore Santa Ynez tasting rooms, the ones mentioned are okay, but there are many others Beckmen, Brander, Foxen Canyon Trail. Driving from LAX always has traffic and is rarely 1 1/2 Hours. Also the Amtrak Train will drop you steps from Hotel Californian and the Funkzone. I would also recommend the Lark restaurant.