Explore The Temples Of Yogyakarta: Borobudur And Prambanan In One Day

On my last trip to Indonesia I was unlucky enough to be in Bali while Mount Agung was erupting. While the touristy areas of Bali were perfectly safe we decided we didn’t feel comfortable staying there and went to explore Java instead.

Since I had already seen Bali anyway, this seemed like a great opportunity to see a new place! My favourite part of this Java trip was exploring the temples of Yogyakarta.

In one day we were able to explore some of the most famous temples in Indonesia; Borobudur, Prambanan and many more! Find out how to explore Borobudur and Prambanan in one day! 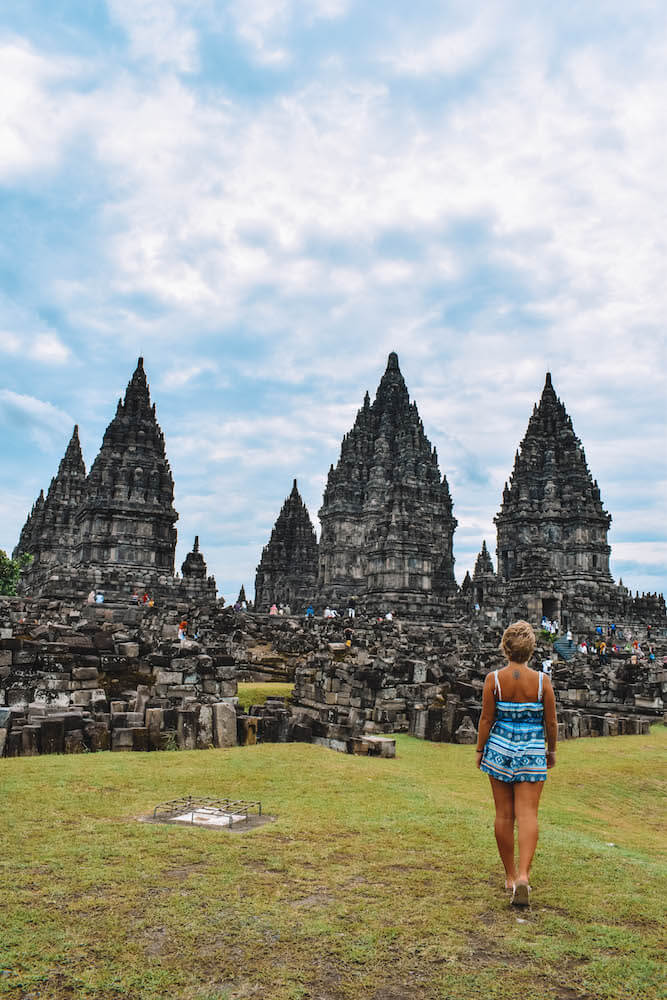 About Yogyakarta & how to get there

Yogyakarta is both a city and a region in the island of Java in Indonesia. It has its own international airport so it can easily be reached by other cities in Indonesia or Asia.

We flew from Surabaya for approximately 60 GBP with Garuda Indonesia and the flight was only 45 minutes long. You can also travel there overland via bus or train, this can be very fun since the landscape is beautiful however it also takes considerably longer.

Yogyakarta is especially famous for its cultural heritage, temples and traditional arts, but also the beautiful green landscapes and beaches on the Southern coast. If you want to explore Yogyakarta beyond just its temples, check out these 13 unique things to do in Yogyakarta. 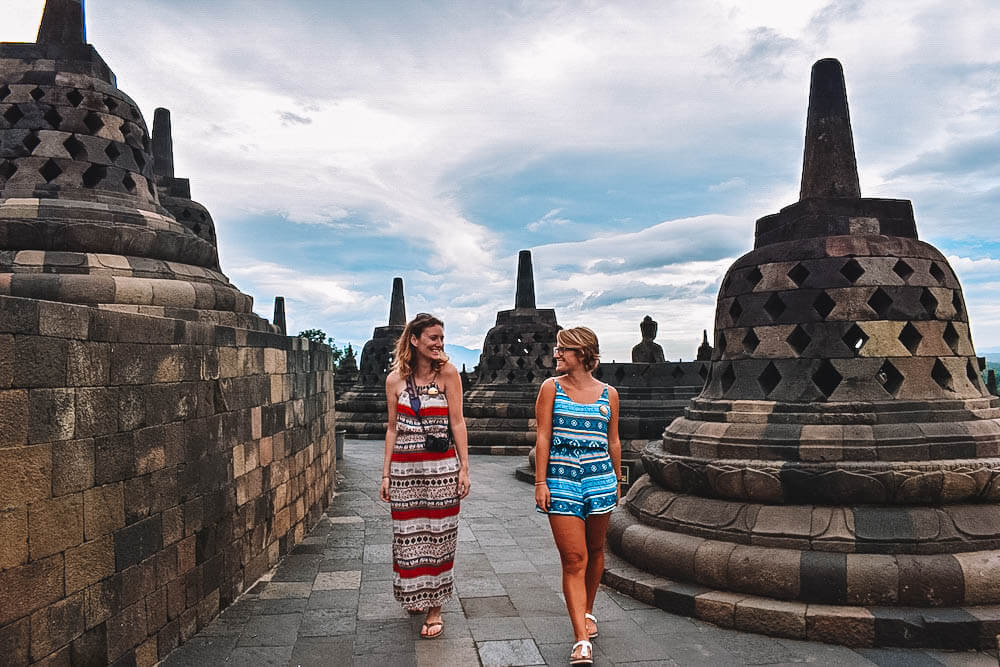 Exploring the stupas of Borobudur in Yogyakarta, Indonesia

Where to stay in Yogyakarta

We got a private room in the Venezia Garden Homestay in the centre of Yogyakarta. While it was fine for us since we were only there for one night (and we were leaving at 4am anyway so not even a full night) I wouldn’t recommend it for a longer stay as it was a bit run down.

However the whole area around there is the centre of Yogyakarta, where most of the restaurants and bars are located, so even if you stay somewhere try to get something in this area. 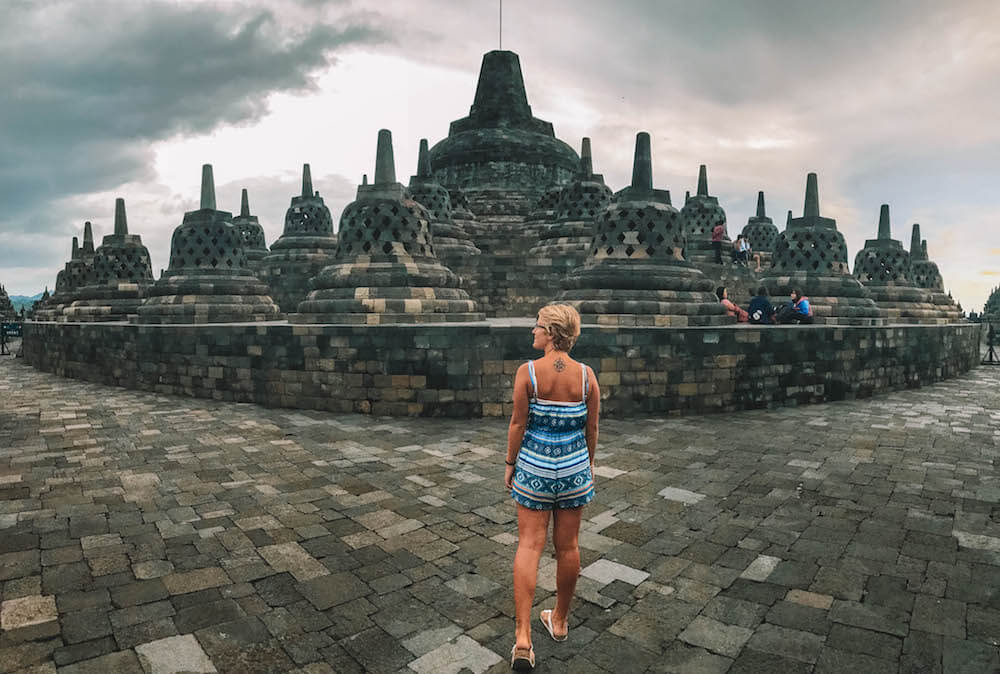 The temples of Yogyakarta

As we only had one day to see all the temples we chose to do an organised tour that would take us to see them all. It is possible to do it alone however you would have to rent a car or scooter as there isn’t really any public transport that connects them all.

Plus we wanted to have a guide that would explain the history of the temples to us. We did the tour with this company and paid 1,254,000 IDR each.

You have to pay a ticket to access the temples, since we did an organised tour this was included in the price, however if you want to explore the temples of Yogyakarta alone bear in mind there is also this expense. 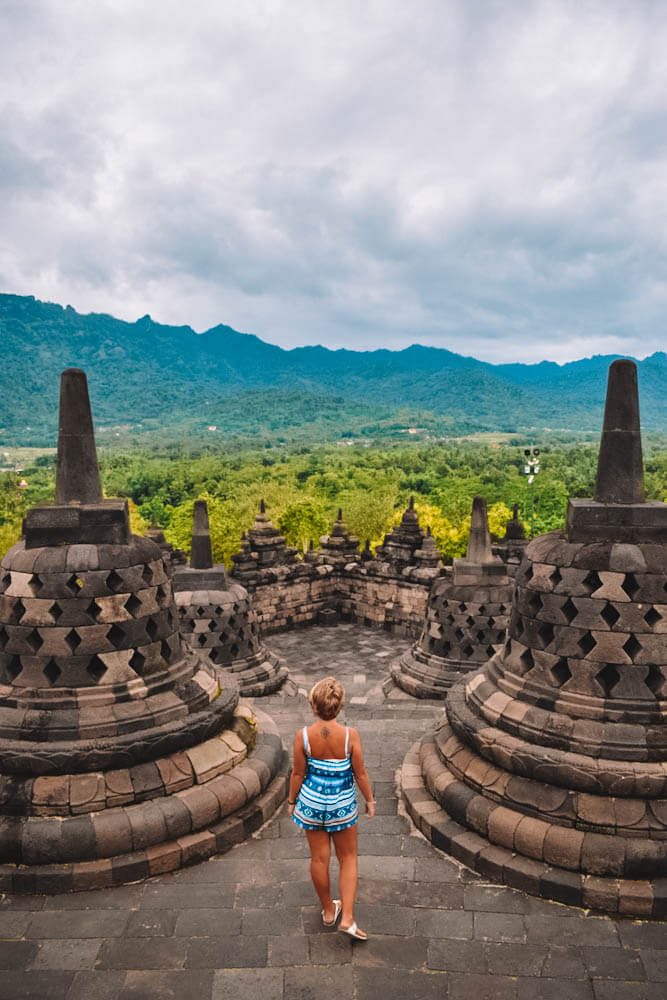 Borobudur is the largest Buddhist temple in the world and was our first stop on our temple exploring day. The sunrise from Borobudur is supposed to be stunning, which is why most temple tours in Yogyakarta start with Borobudur.

We woke up at 3:30am since our pick up was arranged for 4am. The drive from central Yogyakarta to Borobudur took about an hour and a half although I was so knackered I slept in the back and barely noticed. 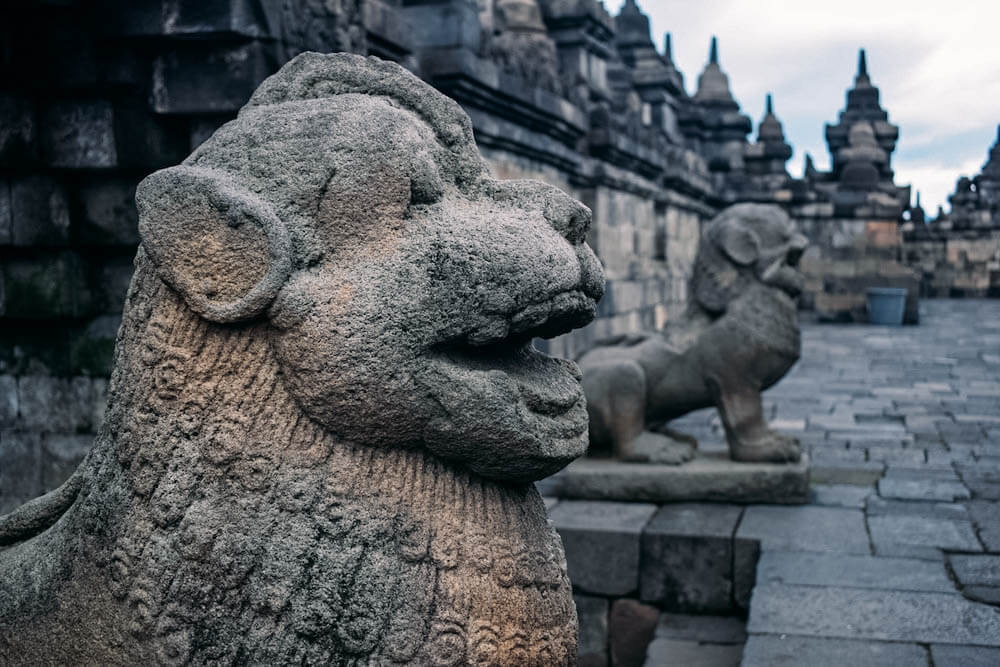 Some of the statues and details of Borobudur

You will reach Borobudur around 5:30am, which gives you a bit of time to find somewhere nice to sit before the sunrise. From the parking lot you will have to walk through the lobby of the Manohara Resort, where you can leave bags in a storage space and where they will give you torches.

From there to the actual temple it’s a short 10-minute walk. Despite being there early enough to get good seats unfortunately it was a very cloudy day so there wasn’t much of a sunrise to see. 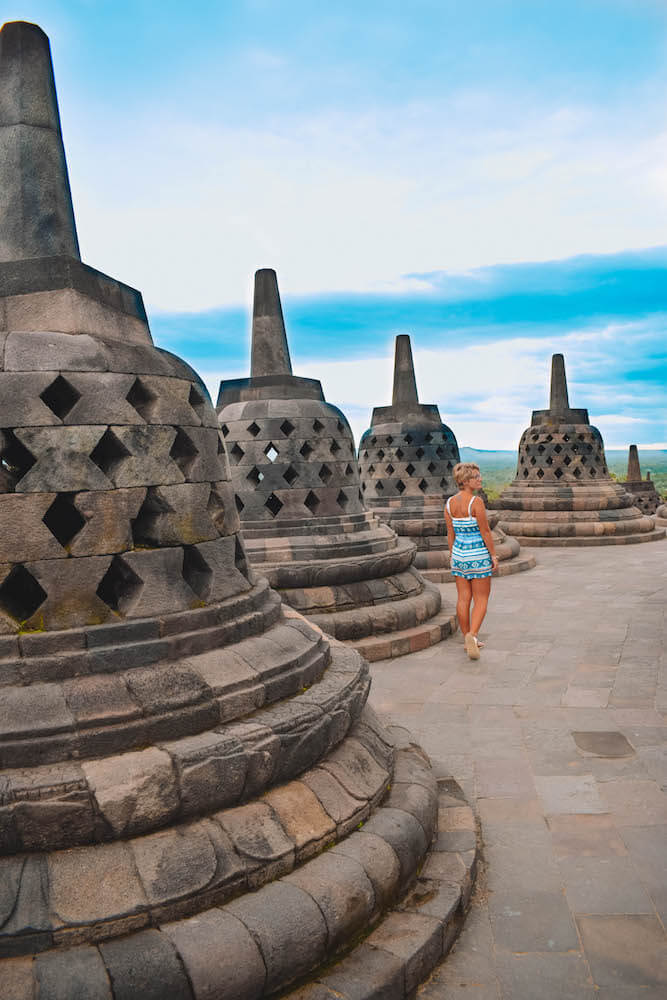 Wandering around Borobudur just after sunrise

Even if we didn’t get to see a sunrise visiting Borobudur so early in the morning was still a magical experience. We got to walk around the stupas (the huge bells) and explore the temple without too many people around.

It was fascinating to walk around the temple and learn about its history. Every stupa has a Buddha statue inside and a couple of the bells have had the top removed so that you can see it.

We also enjoyed playing a game of “spot which stones are original and which have been reconstructed” with our guide.

He showed us how due to earthquakes and over time people stealing the rocks with which Borobudur was built they had to reconstruct part of the temple. The new rocks have a small white dot on them to identify them as not original. 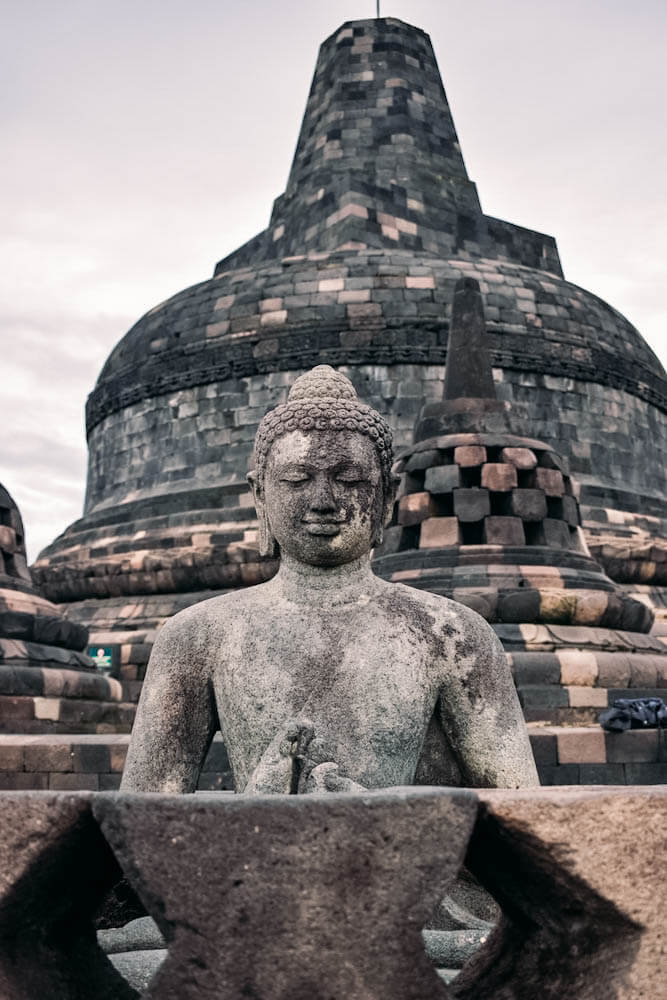 The buddha statues that are hidden inside every stupa of Borobudur

Today however Borobudur is a UNESCO World Heritage Site and there is no risk of people stealing its rocks anymore. The only risk you run there is of not being able to take a photo without other people in it.

At 8am they open the temple to the general public and as we were leaving we saw huge crowds of people going to the temple so we were glad we had the opportunity to see it relatively empty.

Before leaving Borobudur we stopped at the Manohara hotel where included in the tour ticket price we got a light breakfast of tea or coffee, fried banana and a small cake. 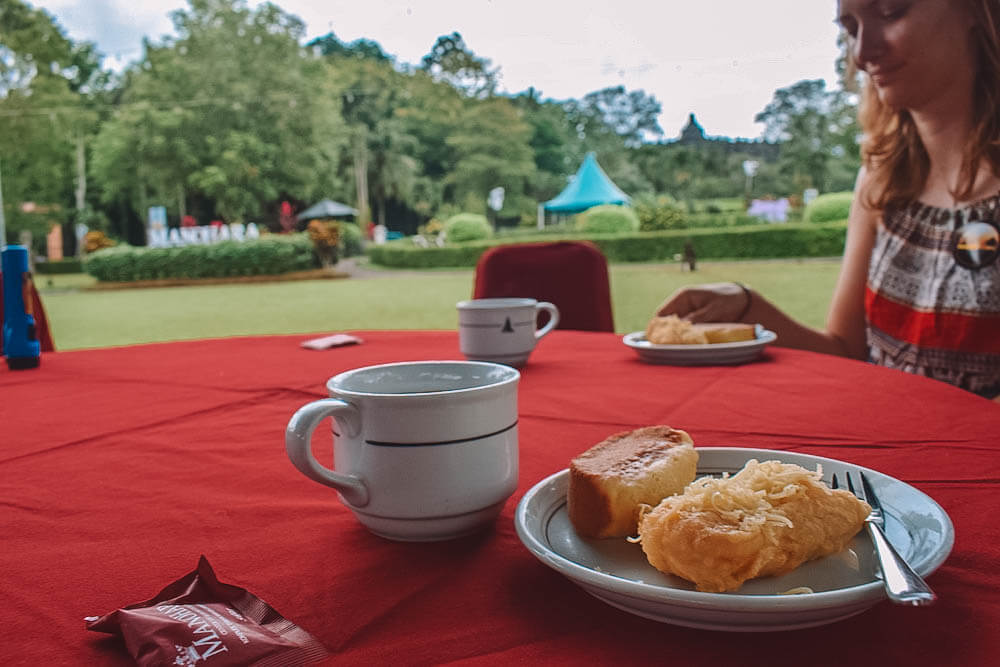 Enjoying our breakfast at Manohara with Borobudur in the distance

Prambanan temple was the next big stop of our tour, but before heading straight there we stopped at a couple smaller temples on the way there. The first one was Pawon, a small Buddhist temple.

Pawon is also a tomb, however it’s still unknown who is buried beneath it. The temple has some beautiful carvings both inside and outside, which depict part of the history of the region. 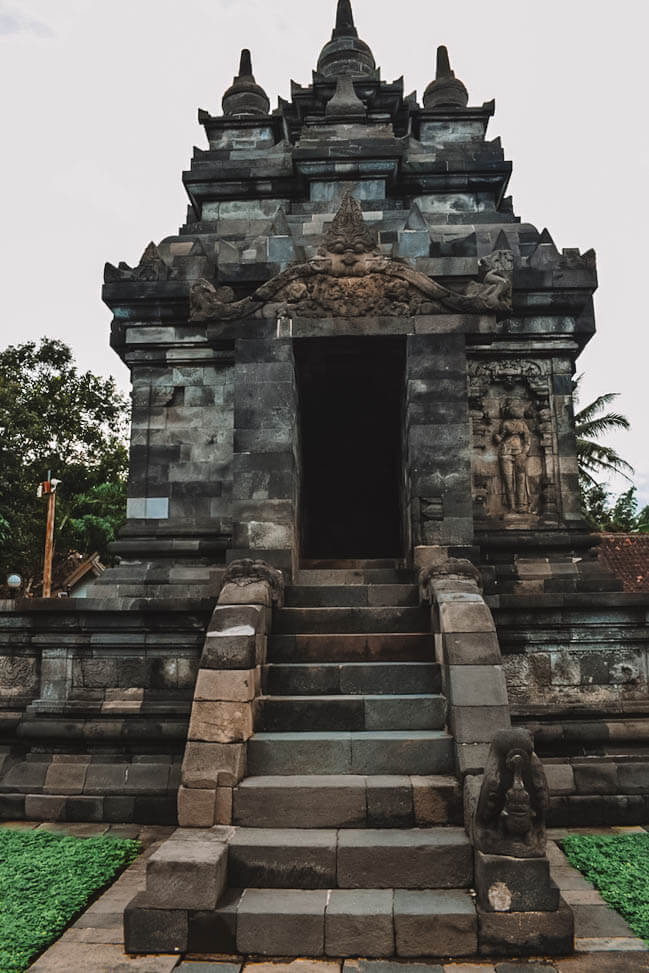 The temple of Pawon in Yogyakarta, Indonesia

The second small temple we saw on the way from Borobudur to Prambanan is Mendut. Mendut is located on a straight line with Pawon and Borobudur, which suggests there might be a symbolic religious relationship that ties these temples together, although the exact ritual is unknown.

We enjoyed visiting these smaller temples, even if they were less spectacular than their more famous counterparts they had a certain beauty to them. We also enjoyed the fact that we were the only tourists there to admire them. 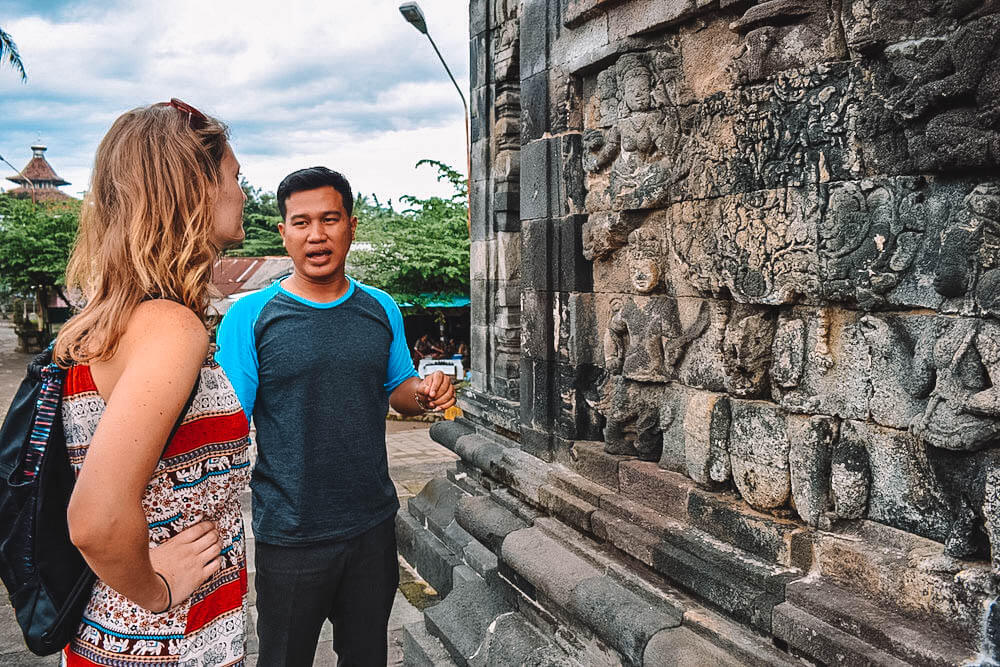 Our guide explaining to us the history of the temples in Yogyakarta, Indonesia

Prambanan is the largest Hindu temple in Indonesia. It’s spread out over a very large surface area and is actually a compound formed by 240 temples.

There are 16 different ones in inner area or central compound, which are surrounded by 224 smaller temples arranged in 4 concentric square rows displayed in a mandala layout. The bigger temples in the centre of the compound also have small rooms inside it where statues are displayed.

Each statue has a different meaning and serves a different purpose. There are four rooms which you can access from small staircases on each of the four sides of the building.

Prambanan was extremely busy when we visited, however it is such a large temple and spread out over such a huge surface area that the crowds are never particularly annoying. Even if it was low season we were visiting during a holiday weekend in Indonesia, which meant there were a lot of locals visiting the temple. 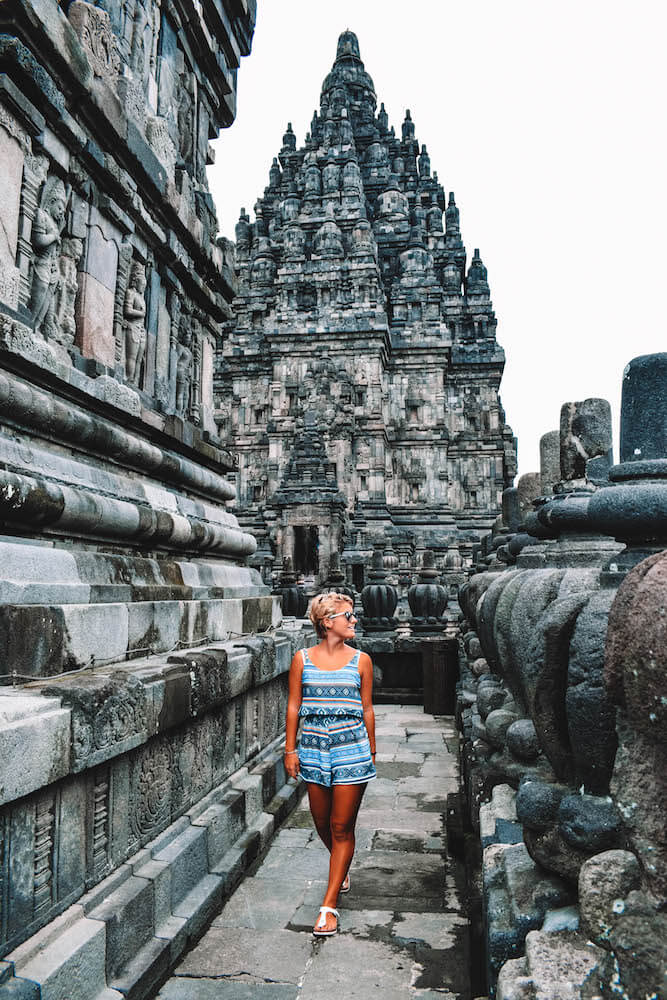 Exploring the main temple compound of Prambanan in Yogyakarta, Indonesia 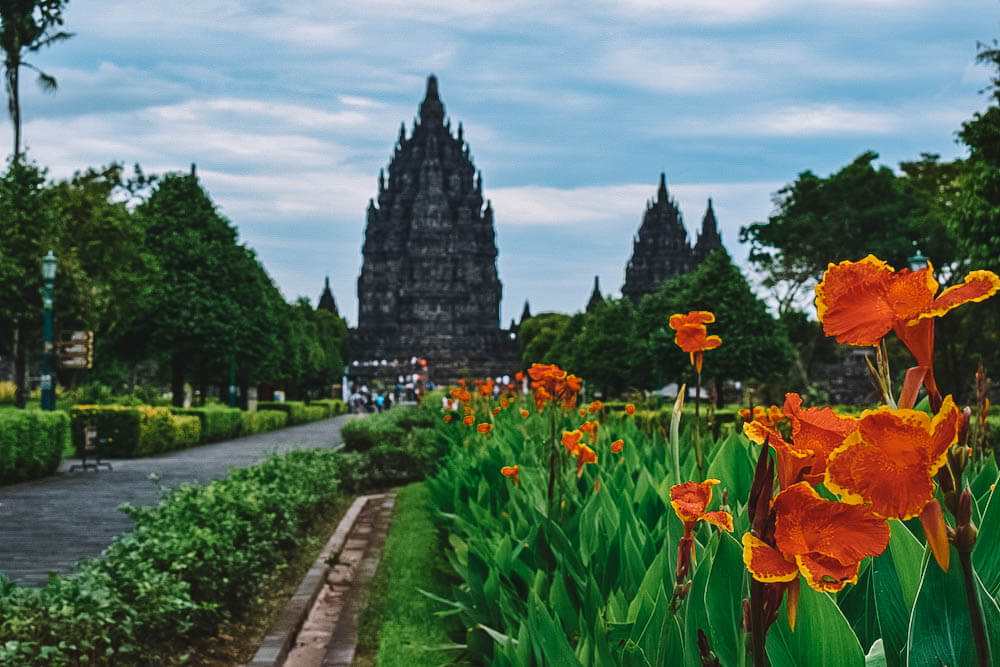 Prambanan temple in the distance

Just 800 metres north of Prambanan is the Buddhist temple Sewu, also known as “thousand temples”. Just after the access gate of Prambanan there is a small train that drives past at regular intervals that you can jump on for free that will take you around the grounds of Prambanan and to Sewu.

Similarly to Prambanan Sewu also has a central compound with a large temple and is surrounded by hundreds of smaller temples. The vast majority of these however have been destroyed by the 2006 Yogyakarta earthquake.

They had to erect metal frame structures around the main temple to prevent it from collapsing, today these metal structures are gone and you can visit the inside of the temple. They are trying to reconstruct also the other small temples around it but this is a long and laborious task, made harder by the fact that a lot of stones are missing. 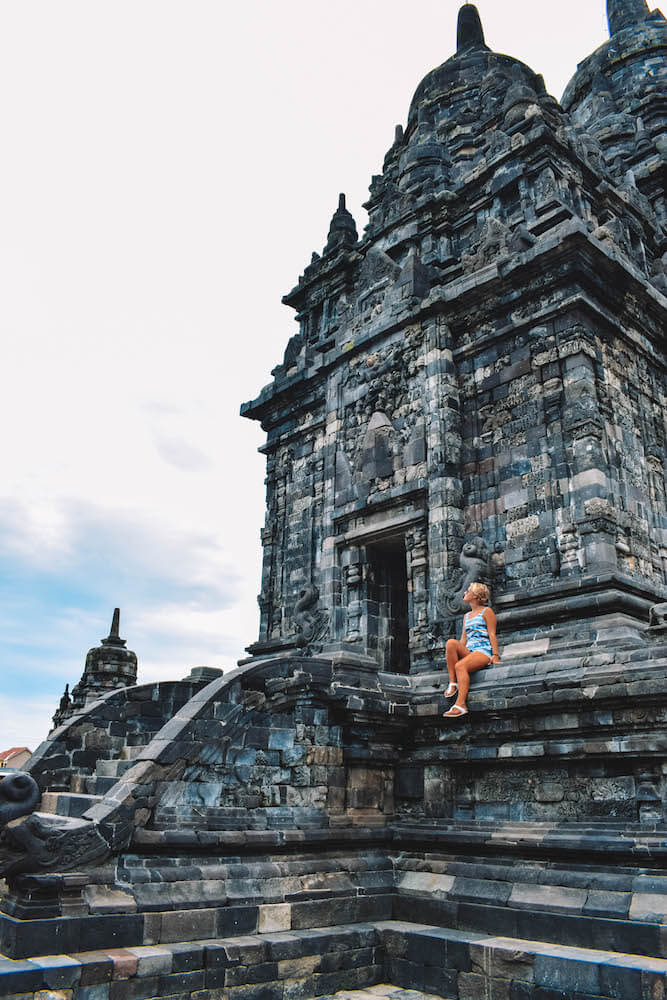 Exploring the main temple of Sewu in Yogyakarta, Indonesia 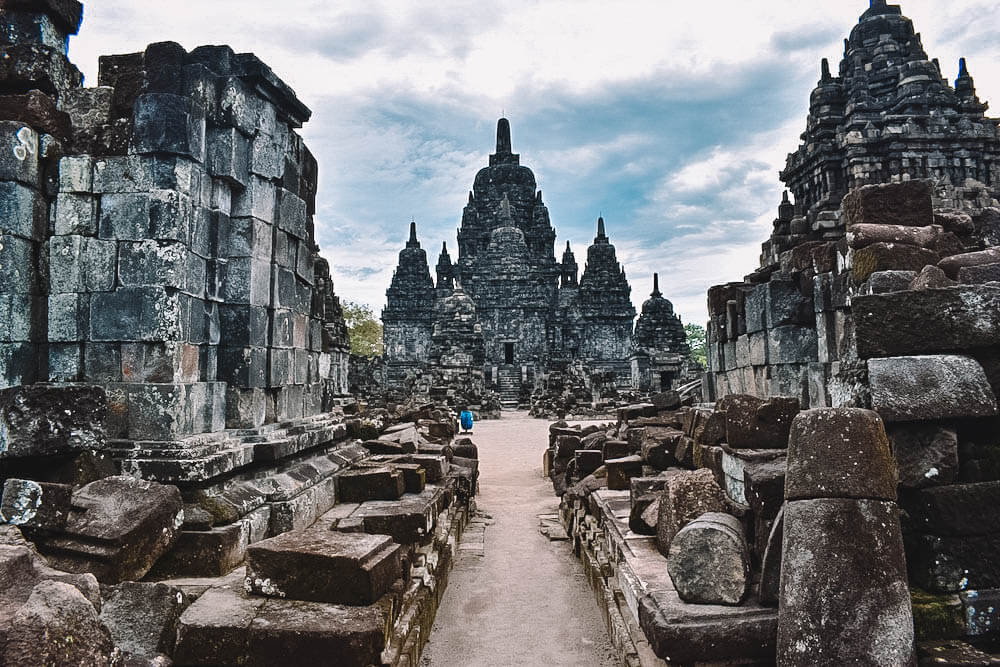 The ruins of the smaller temples of Sewu in Yogyakarta, Indonesia

Have you visited the temples of Yogyakarta before? How did you find it? Let me know in the comments below!

We only had one day in Yogyakarta so we did an organised tour that took us to see all the temples in one go.

My personal favourite was Borobudur, although Prambanan was also impressive in its size and architecture. If you want to explore more temples in Indonesia, check out this guide to the best 15 temples in Bali.

Enjoyed reading about exploring Borobudur and Prambanan in Yogyakarta in one day? Pin it! 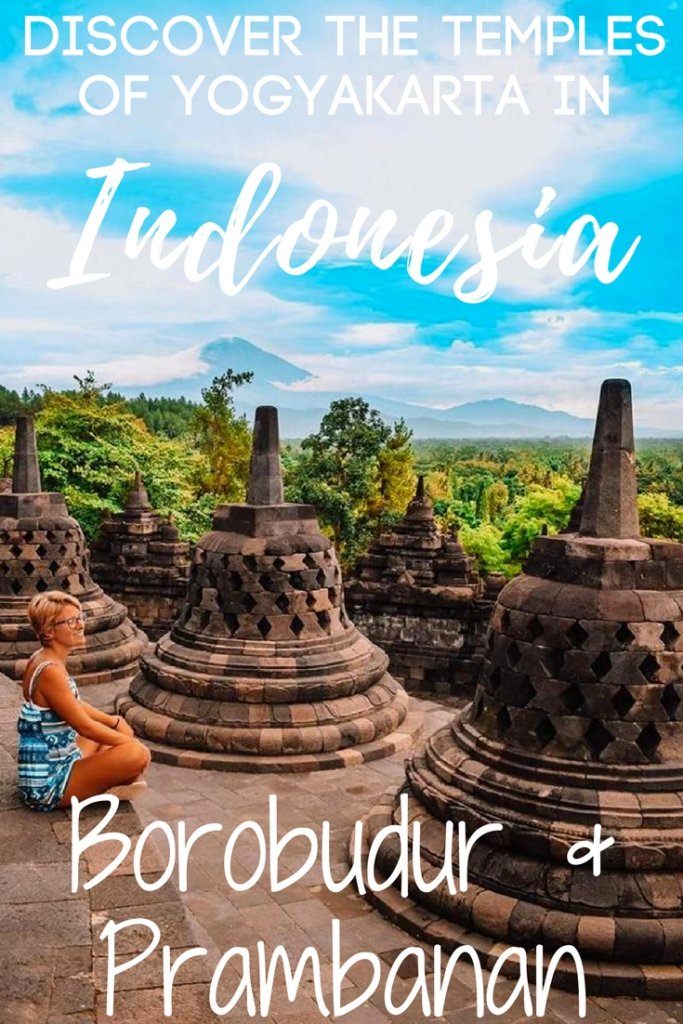 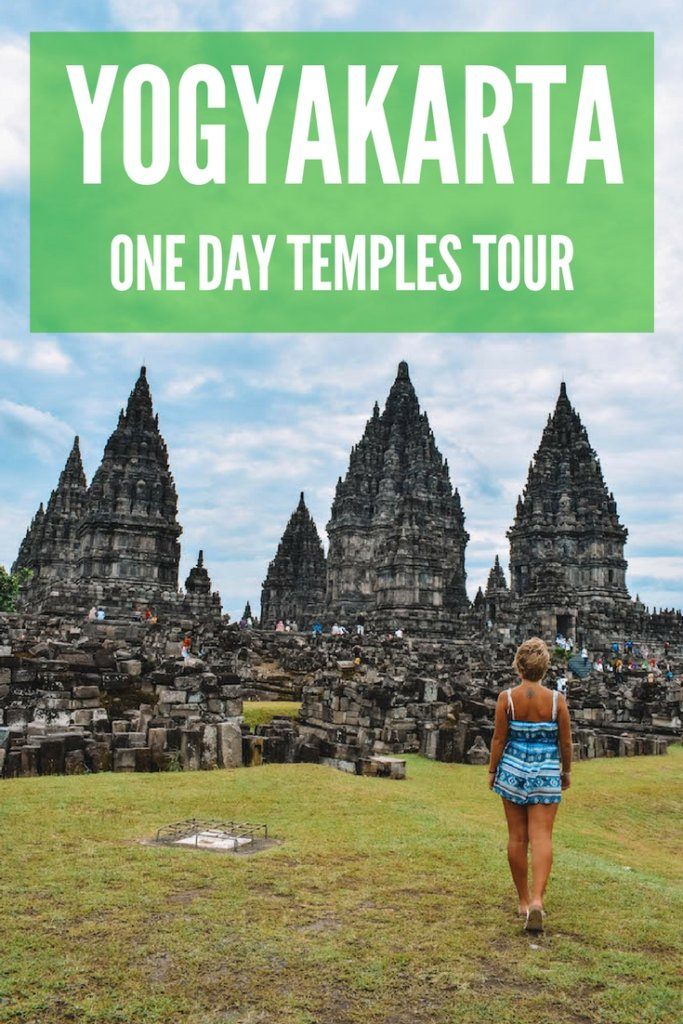 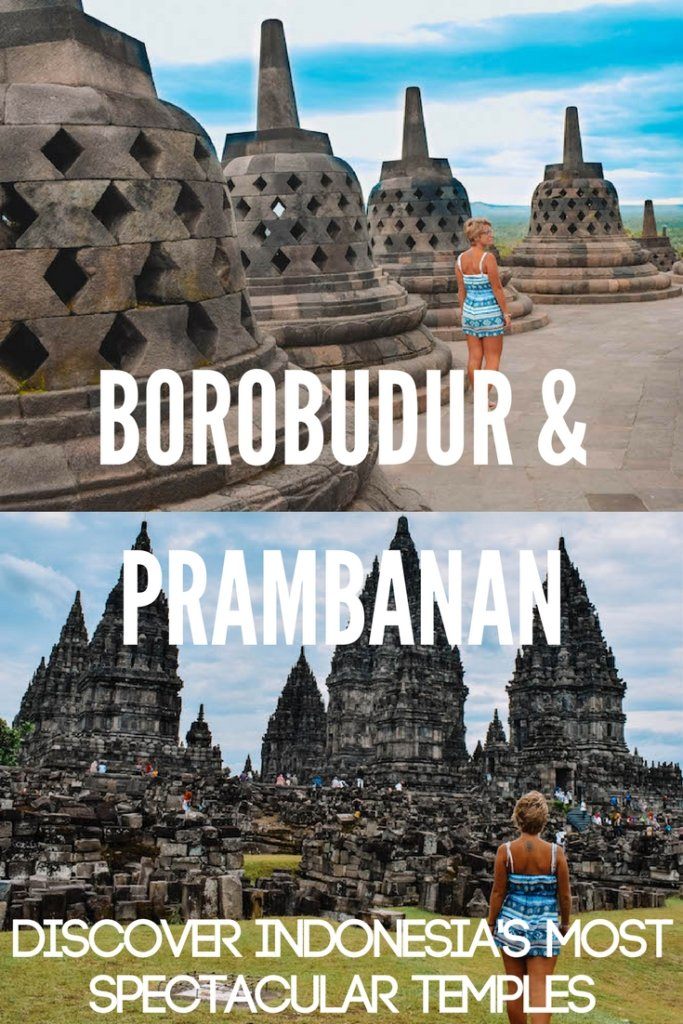